Skip to main content
Labels
Posted by May August 07, 2016 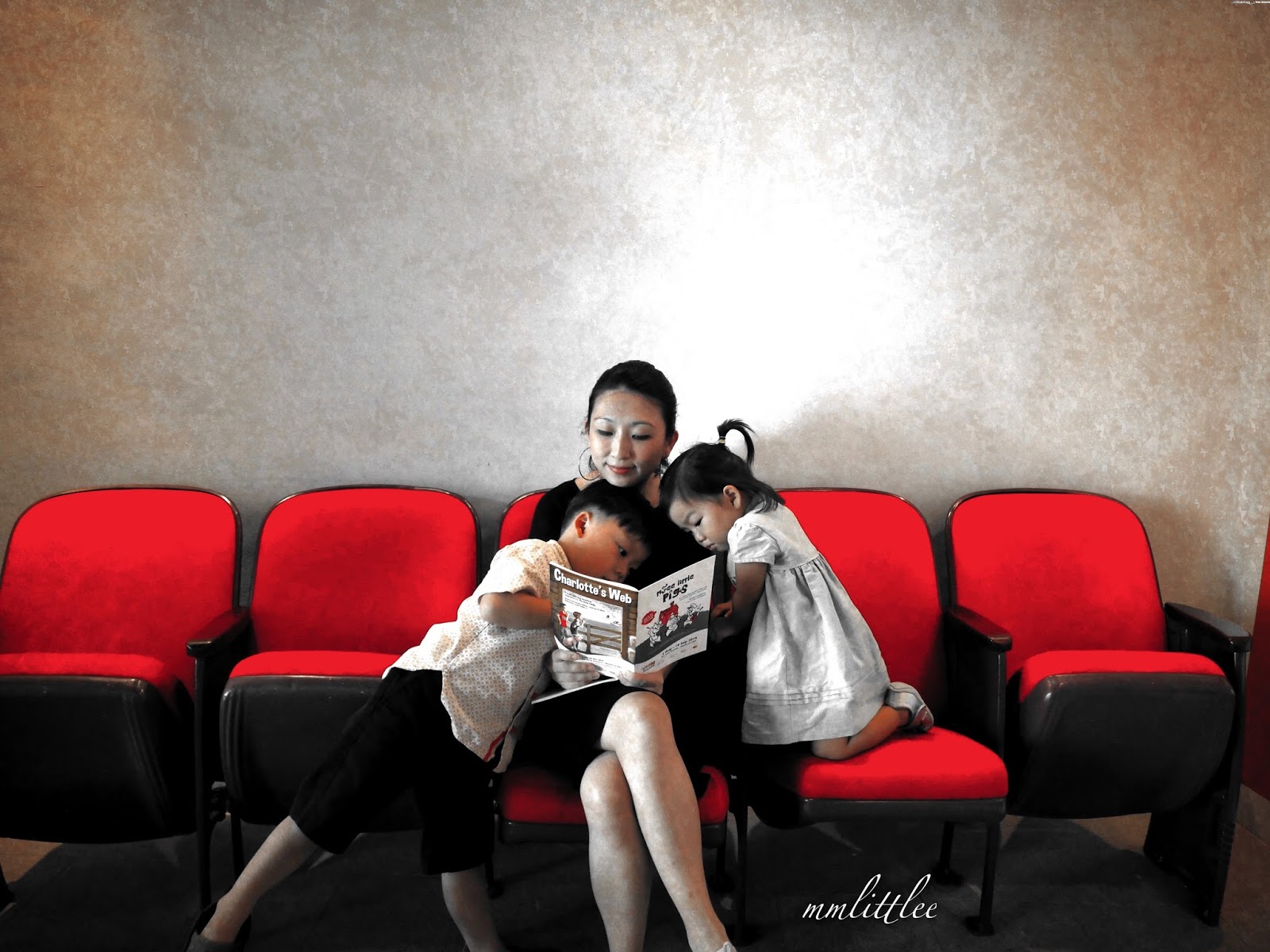 Eight Reasons Why We Catch Every Musical By The Little Company?

1. I will Support Local any day!

2 They incorporate languages [Local Slangs] that we are all so familiar with and reach out to parents as well with their Clever Puns!

3. They take pride and effort in Changing Scenes on the set for their junior audiences just like how internationally renown adult musicals do.

4. They are Affordable - half the price of an on-going Pig [Peppa Pig] production at RWS for the same Cat 1 ticket.

5. Their music Endures time. We always hum and sing to the songs even from three productions back.

6. They produce Real Musicals with Real Singing Actors - not puppet-like or lip-synced [I will not pay to watch an Ariel lip-sync to Part Of Your World].

7. There is always a Moral in the story they stage.

8. "Because they are so darn enjoyable!" said the husband.

*gasps* I didn't expect the husband to say that! I did not want to stop at Point Seven because it ain't here nor there and naturally, I asked Mr Yang what he thought and he contributed to the last point! Daddies out there! Go enjoy the musicals with the family instead of heading in for an hour-long foot massage okay? There will be a lot to talk about post-show with the kiddos I promise.

We had been looking forward to Three Little Pigs since the beginning of the year because the children had been singing "There are lots of pigtails big and small but we think the greatest one of all is the one to do with 1, 2, 3 little pigs. That's us!" ever since we owned the TLC Vol. 2 CD! The first three songs of the CD are from the Three Little Pigs production and I will always find them dancing on their beds to its catchy fun-loving tunes.


Cha, Siew and Bao are the names of the Three Little Pigs and with that, you can imagine how humorous this musical can be. There are so many puns in the musical that got us laughing our [adult] bellies up and special mention goes out to The Convenient Tradesperson, double-played by Mother Pig. The pigs were sent off by Mother to start their own lives and on the road, they thought about the kind of house they'd like to live in. A Convenient Tradesperson came along their way and offered a bunch of straws which Siew bought, a basket of sticks which Cha took and a block of bricks which smartypants Bao traded over with a coin. Not to spoil it for you, I'll only re-enact one scene off their encounters:


A Samsui Woman [the convenient tradesperson] came along balancing bricks and walking wobbly down the road. That in itself was a funny sight. She spoke with a dialect as she bumped into Bao and was in comical astonishment when he offered to buy her bricks! She took the coin and walked out of the stage, "Lim Kopi Ah! Kopi Sui Dai!" 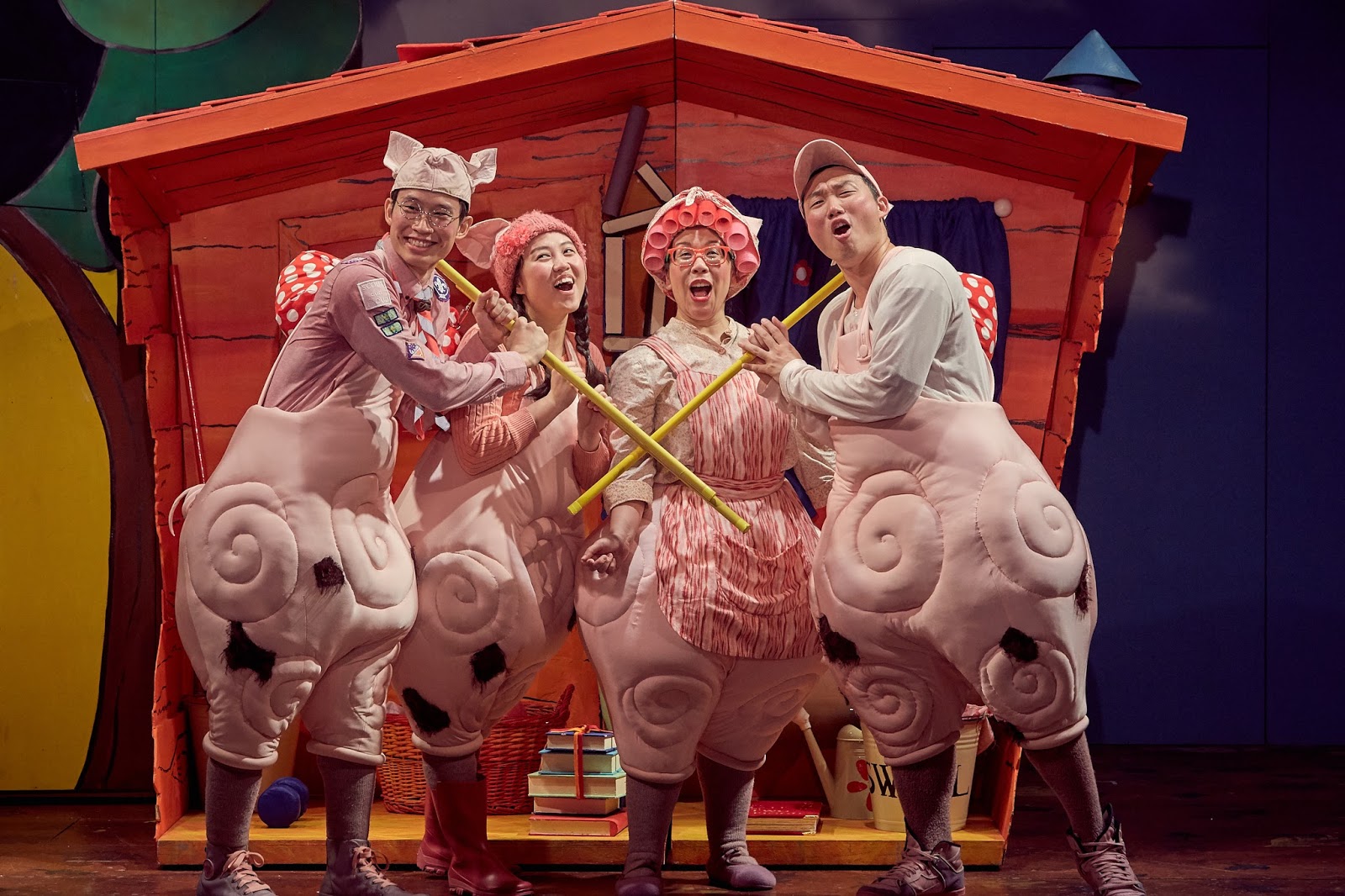 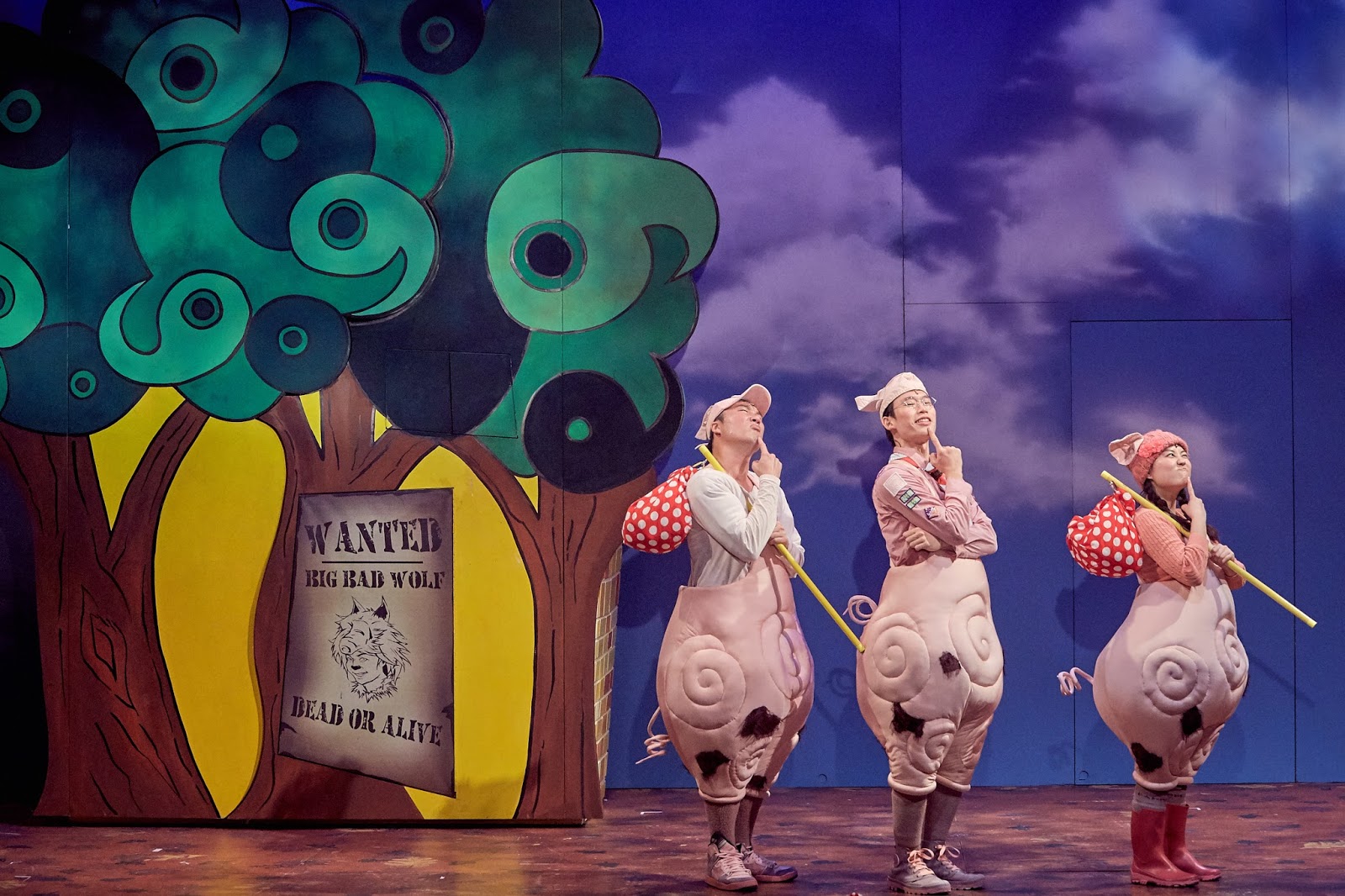 We each have a favourite character in the play. Ewan loves Bao because he is brainy and built a home that was indestructible. Faye said her favourite is Mother Pig because, well, because she loves all mommy figures but I think she found Mother Pig hilarious too. I wonder if she knew The Convenient Tradesperson and Mother Pig were the same person! The children watched on without batting their eyelids and gave 101% attention to the stage. Faye sat through the 50 minute musical on her own, on her booster seat, and got our neighbouring patrons praising her with pride. It was an amazing sight to see a two year old mesmerised like she was and flinched not a bit even when Big Bad Wolf came on. She's a tough crowd because she hardly let out a chuckle too when the entire box office roared with laughter. But when the show was over, she talked about it through the weekend and laughed heartily as she recalled the scenes. Browsing Three Little Pigs program booklet over and over again and pointing to our group photo with the casts. Do not forget to pick up that program booklet because it could keep your child occupied with some colouring fun while at the dining table ay? 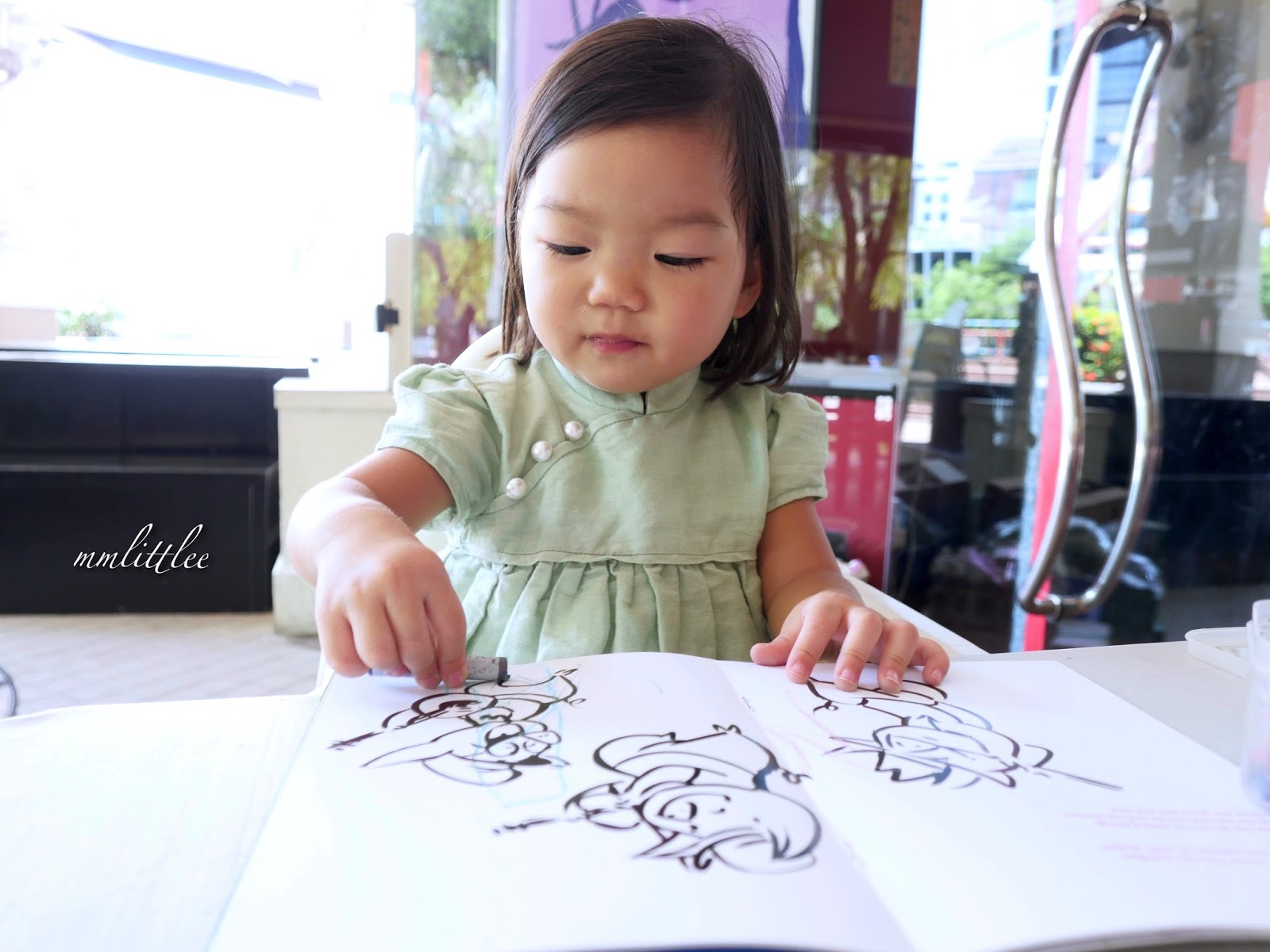 Oh that Big Bad Wolf. He is mine and daddy's favourite character. He is full of humour, sang like a star and aced his role with a commanding performance. Every time Big Bad Wolf came on stage, I watched him like a hawk and wished I could remember every move and pun he did just to relive that humour when all is done and over. You've got to watch him scratch his hairy flea-filled body, listen to his howls and catch his witticism on gobbling down a Double-Whopper [catching two pigs in one house]! 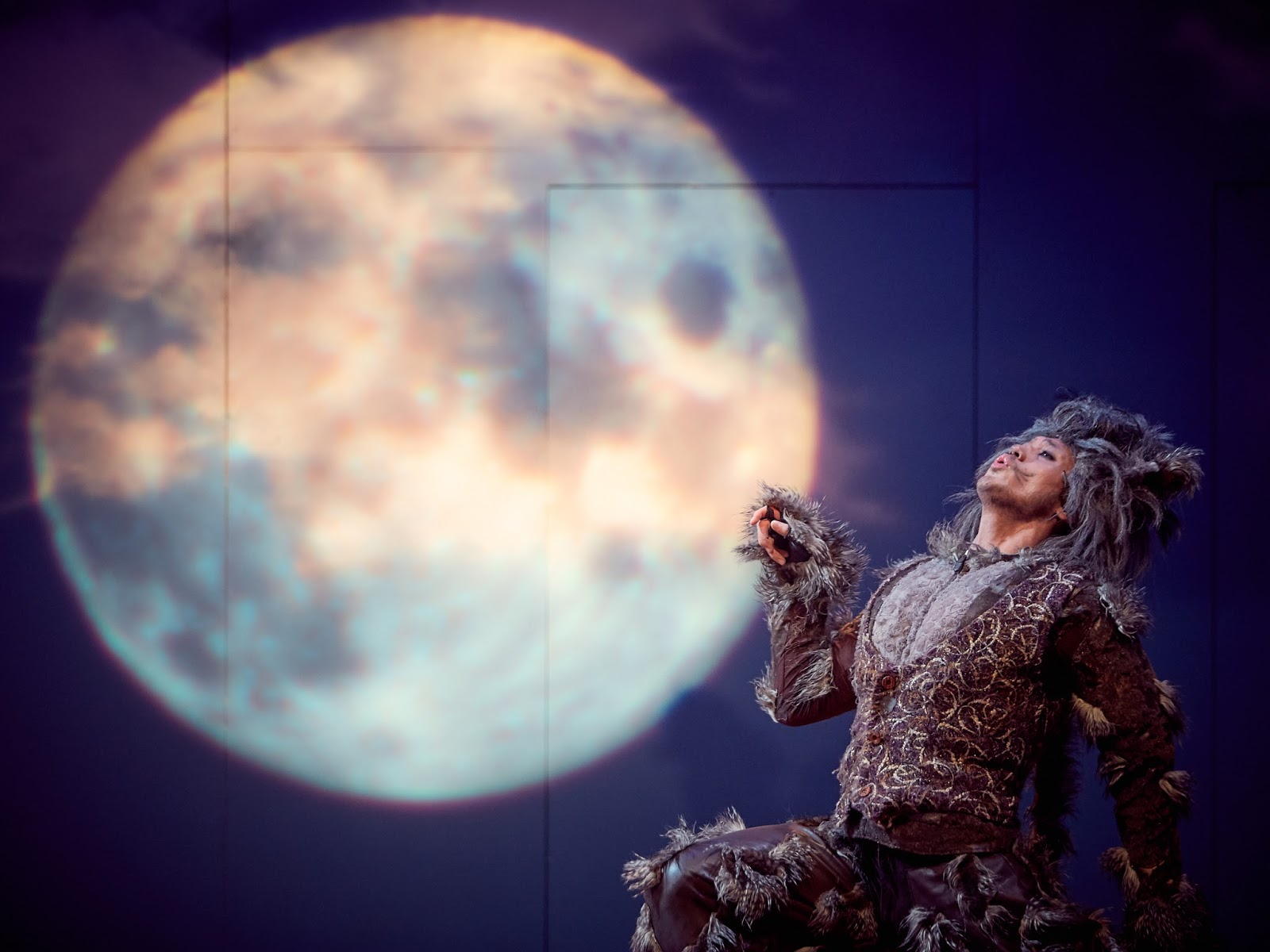 About the set and costumes, I personally find Treasure Island and 金发姑娘和三只熊 more impressive. It doesn't help that pigs do not look flattering or adorable like bears and goats. These Three Little Pigs had fat bottoms [why of course] and hairy patches on their pinkish skin [ewww] but *haha* they are swines. How more pleasant can the costumes be designed? The use of props and the way their Straw and Stick homes were huffed and puffed away by the Big Bad Wolf was very innovative I must say! Though, I still liked how more intense and dense the aforementioned musicals had their sets staged.

Now for you Cat 2 and above theatre-goers, did you know the weekend Cat 1-ers have an opportunity to meet and greet with the casts of Three Little Pigs? They are seated from Rows B to F and will be invited to stay behind till the house is closed for the photography session. A professional photographer is provided and your 4R group picture will be printed and framed instantly to add to your memorabilia collection. 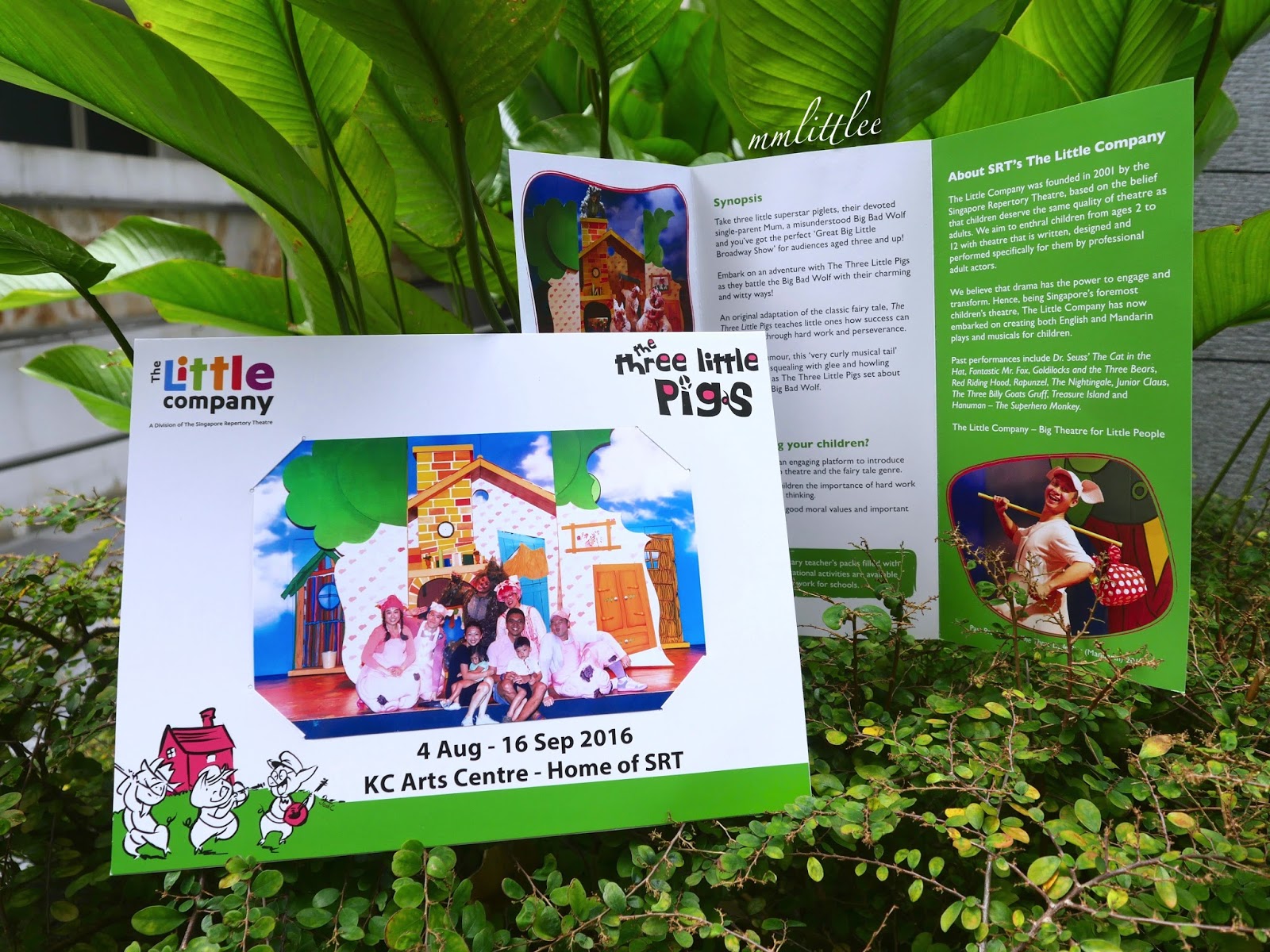 We were in the Stalls at Row H, seated right in the center. I must say, if you aren't looking for a meet-and-greet session, Rows G to J are perfect for an unobstructed view of the musical. You will still be treated to a clear view of every actor's facial expressions and basically, save S$10 per ticket to be in Cat 2 on a weekend show. A BIG TIP here for you! If your child decides to meet the casts after the show, even when you did not purchase the Cat-1-With-Photography-Ticket, you can still realise that dream for him by purchasing a meet-and-greet session at S$10 per head on the spot! And that was what we did. 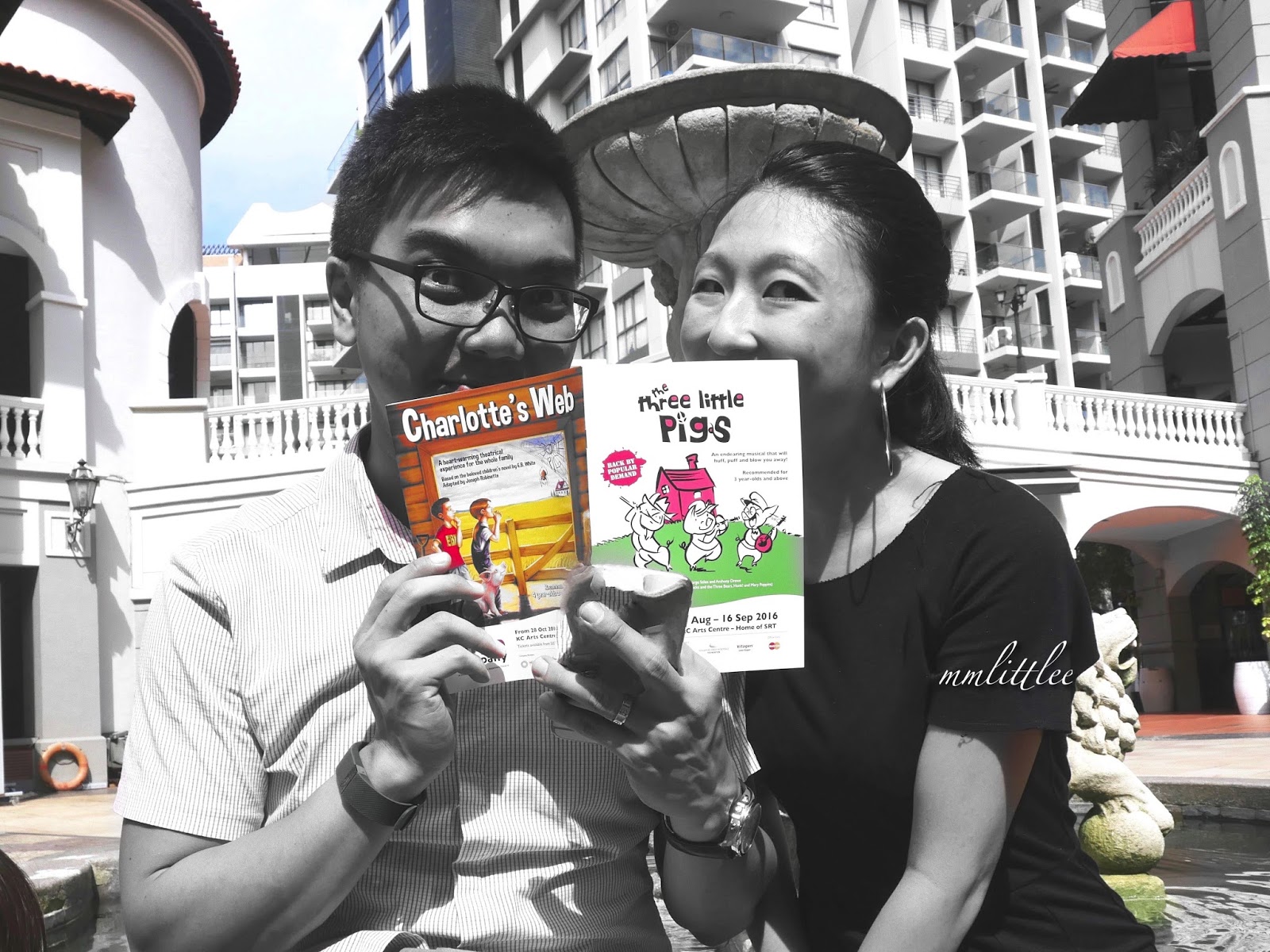 Three Little Pigs runs from now till 16th of September 2016 so do not miss this if you haven't bought your tickets!

We are looking forward to their last children installation for the year Charlotte's Web coming up to end 2016 with an impression to last. This is probably more for us parents who are eager to watch our childhood literature on stage!

CONTEST
Right outside the theatre door, you will find three little pig standees available for some photography fun. Do not forget to pose with your favourite pig and have your picture posted on Instagram with #TLCThreePigs and #gymkraft then follow both @srt_thelittlecompany and @gymkraft to win tickets to Charlotte's Web and a year's membership and lessons at GymKraft with S$420 in total! 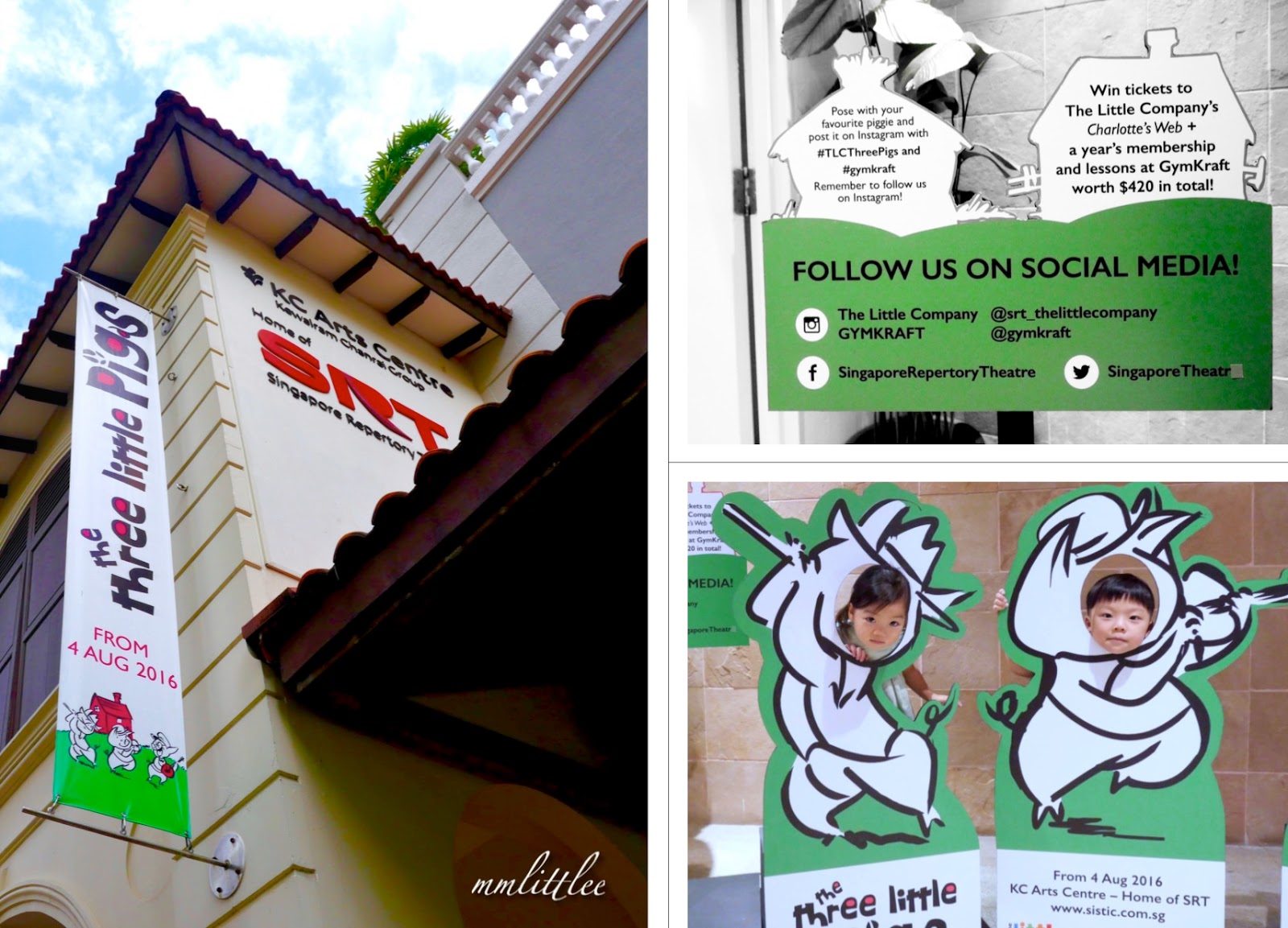 For my Instagram Followers, here are the links to the production team you can follow and obviously, I am following every single one of them: