Skip to main content
Labels
Posted by May January 05, 2018

The Making of #mmlittle家 - Master Bedroom

The master bedroom is where we retreat to after the children wind down for the night. A space to connect as husband and wife, we decided to dedicate a bigger space to us by knocking a hole into the wall to put two rooms into one.

When I first saw the showflat to this property, I commented, "Oh my goodness! The master is so small it's like living in a mouse hole! I cannot live in here. So unless we buy a four-bedder and knock down a wall, we should look for something else."

We eventually decided on the four bedroom unit but Meyer was very reluctant to knock down any walls, "Why do you want to do that? Do you know the Bangladeshi workers spent lots of heart and sweat to build a wall?  Brick by brick, and all you want is to take it down in one day."

I kept quiet and let him say No but I knew I will persuade him eventually to relent.

The day we collected our keys, we walked in for an inspection. The workmanship was poor and he was very disappointed. We brought in Absolute Inspection to conduct a thorough check and they came up with a list of 120 defects!

The next thing Meyer said was, "You know what? Just hack that wall. Heck it. I have no empathy for the workers anymore. Such bad workmanship! No passion in their job at all!"

Woohoo! There. I knew I'd get my way *winks*

Looking at this picture, I am House Proud. Even more so when we've made it to the front cover of Square Rooms magazine for the February 2018 154th issue! 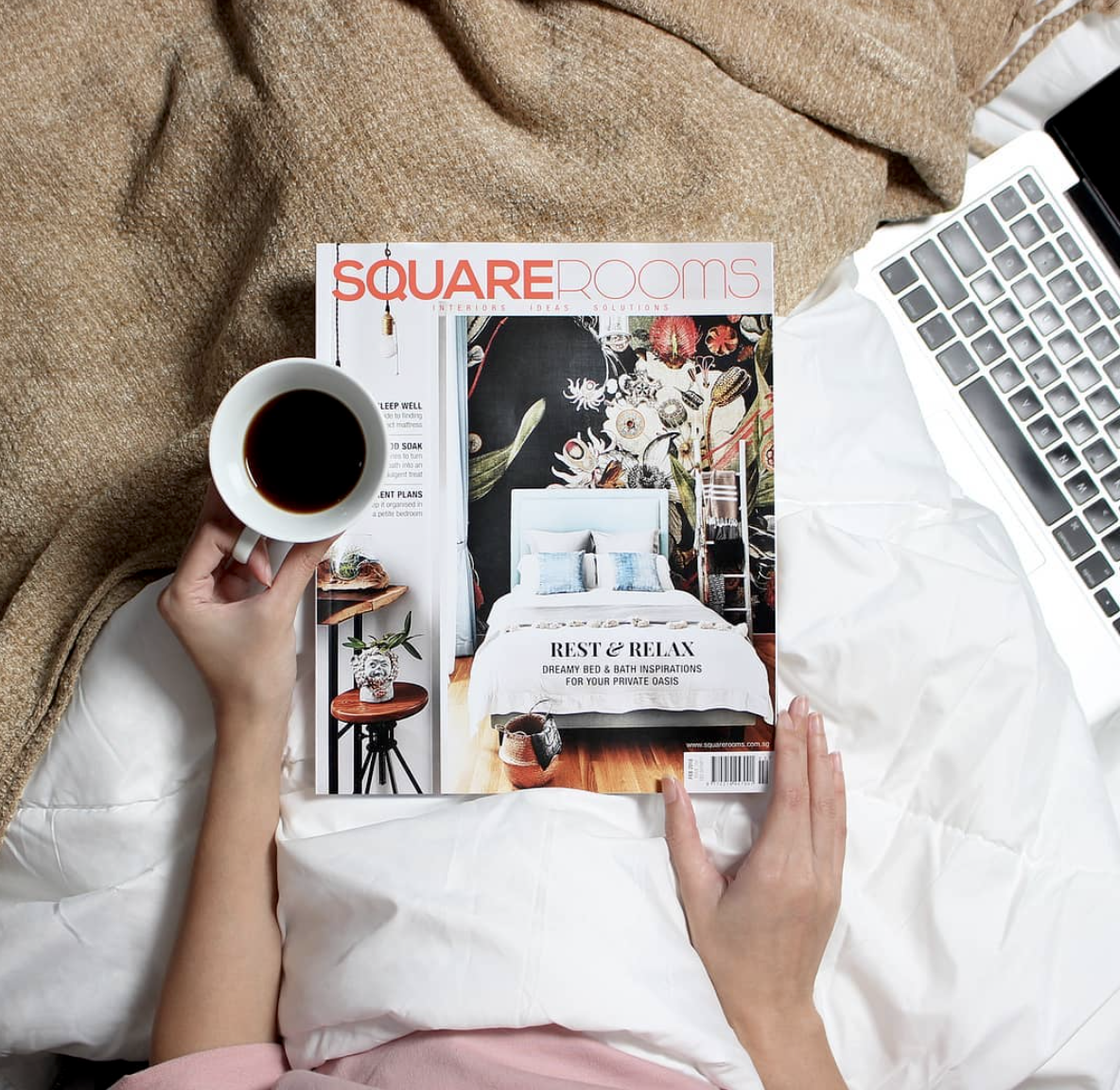 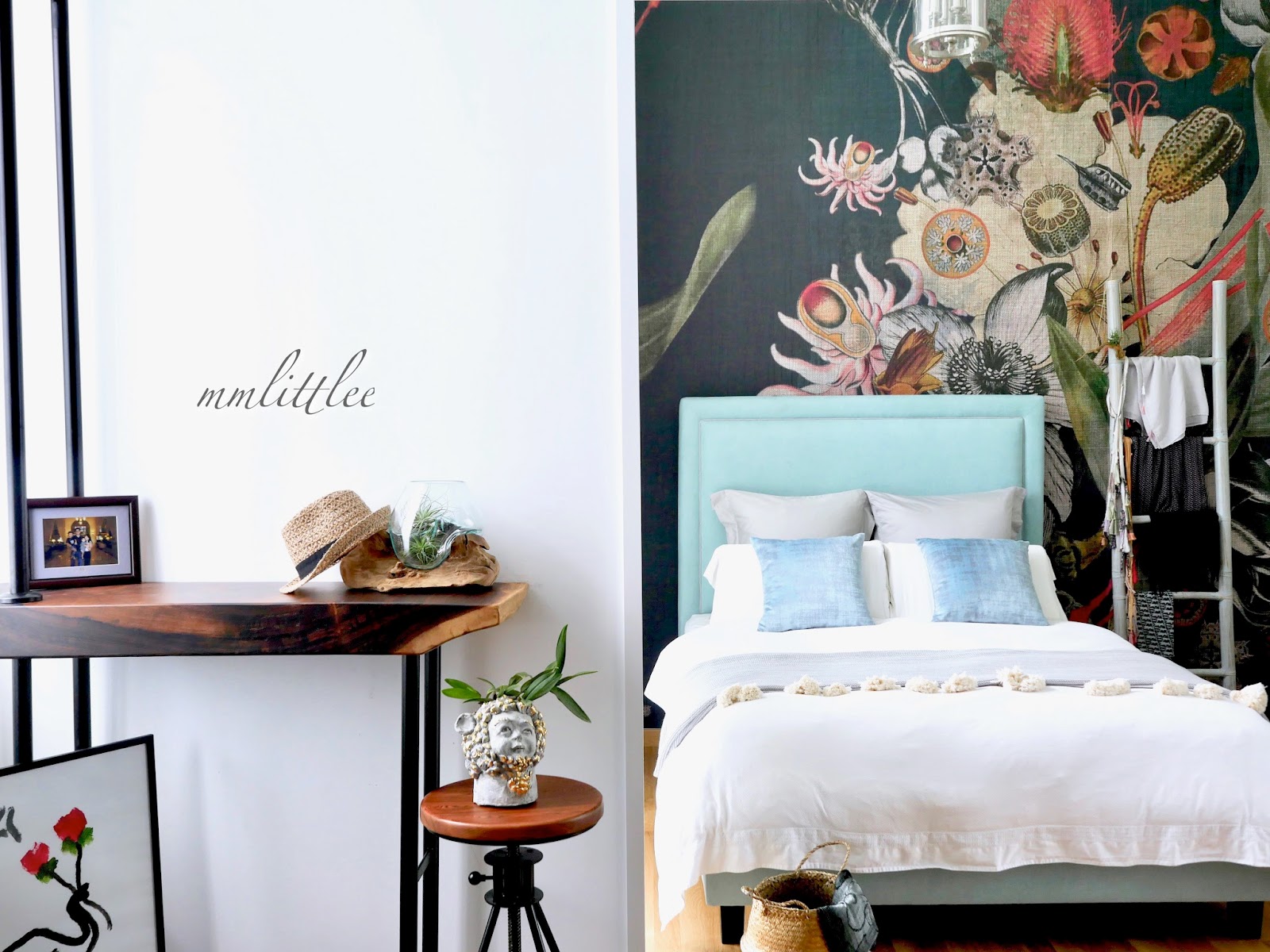 WALLS
We have two feature walls in our bedroom. Both of which beautifully installed by Layer Play Design. They have a partnership with Robin Sprong bespoke collection of wallpapers where he collects illustrations of artists around the world that could be translated into wall coverings.

I fell in love with the collection and trust me to do this, which I did, I clicked into every artist link in there to find the perfect wallpaper for our home. I spent sleepless nights scouring the site, wondering if this would work better than that.

As much as I've given my husband full reign of our master bedroom [because he let me do everything I wanted for the rest of the house], I wanted to be involved too. Overly involved but always bore in mind that I should trust his taste and let him have his man cave.

So hey! Disclaimer! Meyer chose all the wallpapers in our master bedroom!

Bedroom Wall:
This was a tough call. The original choice did not work at all. Layer Play Design had it printed and was ready to install it when I stared at it in bewilderment. It wasn't what we have initially chosen and I was darn sure they've had my choice of wallpaper printed wrongly. It looked absolutely different from what we saw on Robin Sprong's website!

A quick check and we realised that it was the same wallpaper. On screen, we couldn't see the detailing of the pattern but when printed, we could. I did not like it because it was made of dots. Lots of dots and a wall full of dots made me dizzy.

We had it changed and because Layer Play Design prints all wallpapers locally, I needn't wait for a month for shipment to arrive.

I had always been attracted to The Room 13 Collection. But the artworks are so bold, I was too scared to put it up. What caught my eye and had me presenting this print to Meyer was this I saw on the web: 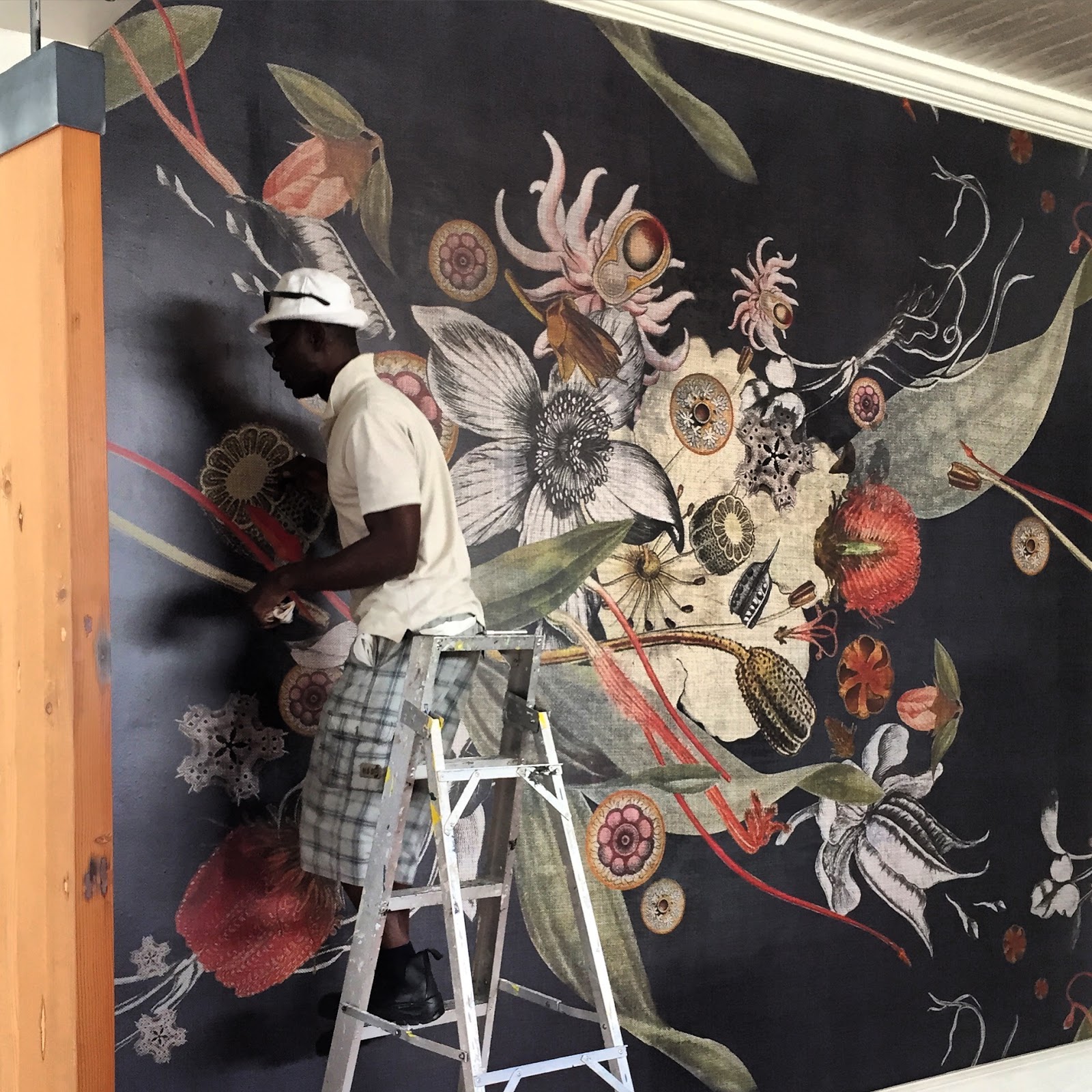 Art is subjective and this is gorgeous in my opinion. However, I did not have the courage to put this up. My husband told me to trust him and stop thinking about other options. "Confirm this Botanical print with Layer Play. I am very sure of it." he said with conviction.

With that, we got ourselves our favourite wall in #mmlittle家.

Entertainment Room Wall:
In the other room, we designed a space for entertainment - Netflix, Chill and Gaming. Again, the husband's room and he decided on Donna Solovei's design for the wall.

There is a certain kind of sensitivity to aesthetics in Donna’s work; she employs natural lines, influenced by the textures and shapes of the world around us, to depict her characters. We agreed on Red Lines and Circle; and I wished I had a wider wall to showcase the landscape view of your illustration.


WORK TABLE
I had this idea in mind for the longest while; rather early in the renovation stage in fact. However, we shelved it because of cost. It was not a necessity but an accessory. Yet, after we moved in, I couldn't stop thinking about it.

I wanted a floating bar height work table made of wood with black industrial poles that fitted right up to the ceiling. The empty wall in the entertainment room seemed like the perfect place to have this study. Coupled with an wooden industrial bar stool, it will complete what I have in mind for our bedroom!

Ah! I just had to get this done! I promised myself that this shall be the very last piece of project for #mmlittle家. After that, I'll enjoy the home for the next decade without any more construction works.

I was introduced to Woodfix. After witnessing the quality of wood and passion of the workers from Woodfix, Meyer concluded, "I want them to be our Wood Guys for all our future homes from here on."

That is a very big statement. A very big compliment to Woodfix  They are more than carpenters. They are craftsmen.

Unfortunately, the making of this work table was nothing close to smooth-sailing. I met the owner, Aaron, in the start of December and he drew out my idea on the spot. I enjoyed the meeting and welcomed his input as well to make the space more liveable and safe for Ewan and Faye who will be running around the corners.

We had a lot of time to get this going but because it was supposedly a simple job, we delayed it till the end of December. Aaron found a metal company to construct my base for me and were set to start work on the 20th of December 2017. It got delayed and pushed back to 28th, then 29th.

We finally had Woodfix over last Friday and I was excited to see it finally fixed! To my disappointment, the metal guys played us all out. We [Woodfix and I] waited the whole day at home for them to come and they said they would at 1300 hours, 1500 hours and 1700 hours. But no one turned up. It was a terrible day and I ended up with a headache because my plans were changed like four times in a day to accommodate the metal people.

So we kicked him out and Aaron managed to find another company to work over the New Year holidays to have our table fixed on 2nd January 2018!

They took the whole of 2nd Jan to build my table. While it could have just taken half a day's work, they left only at 1900 hours. The metal legs were welded in the wrong dimensions and the vertical rod was too short for the ceiling. Aaron was relentless. He worked really hard to have it all done in a day's work because we had it delayed for far too long.

I am just thankful it is all done by the end of the day.

Guess what! I love it to bits! This space is LOVE! 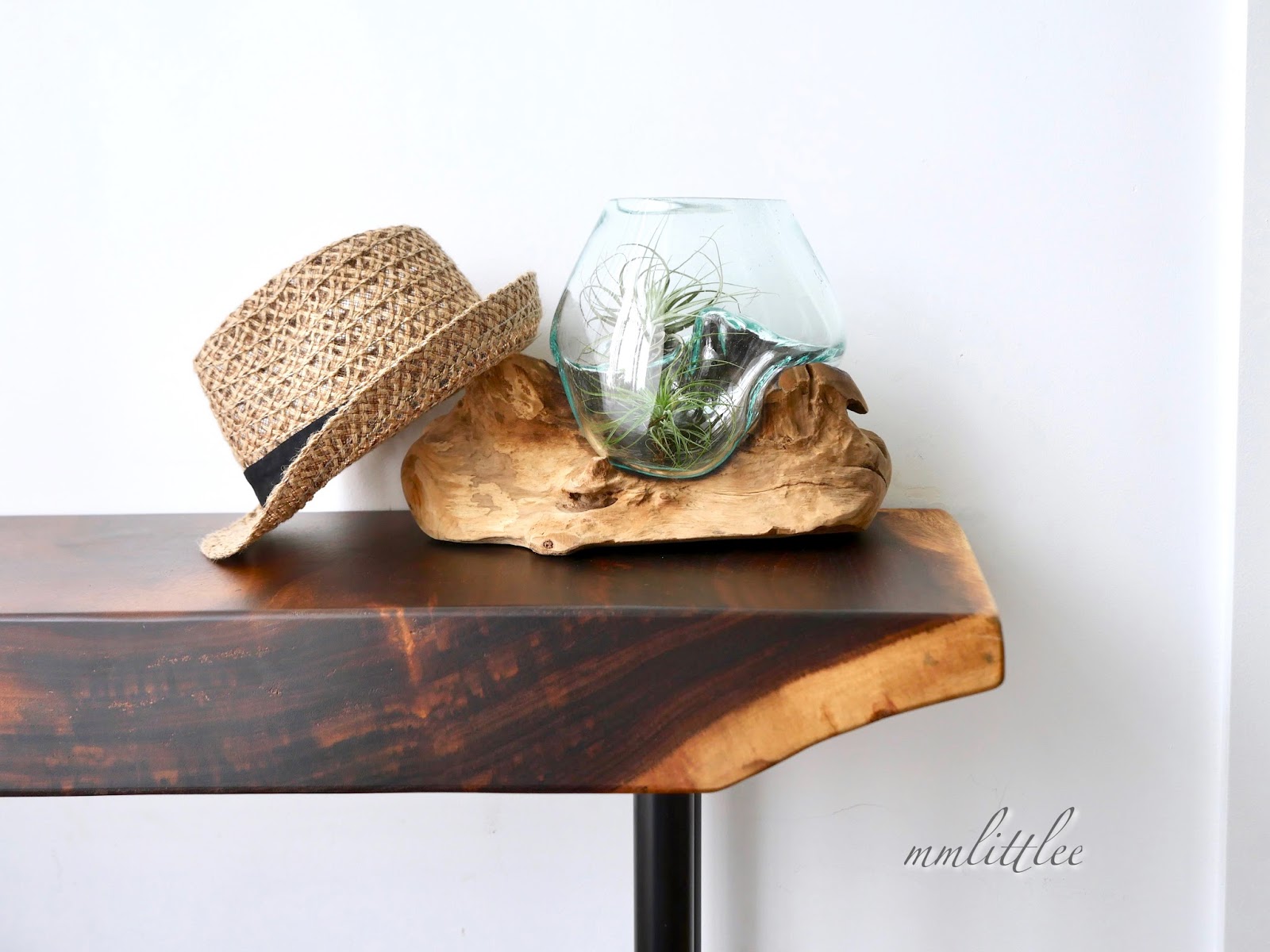 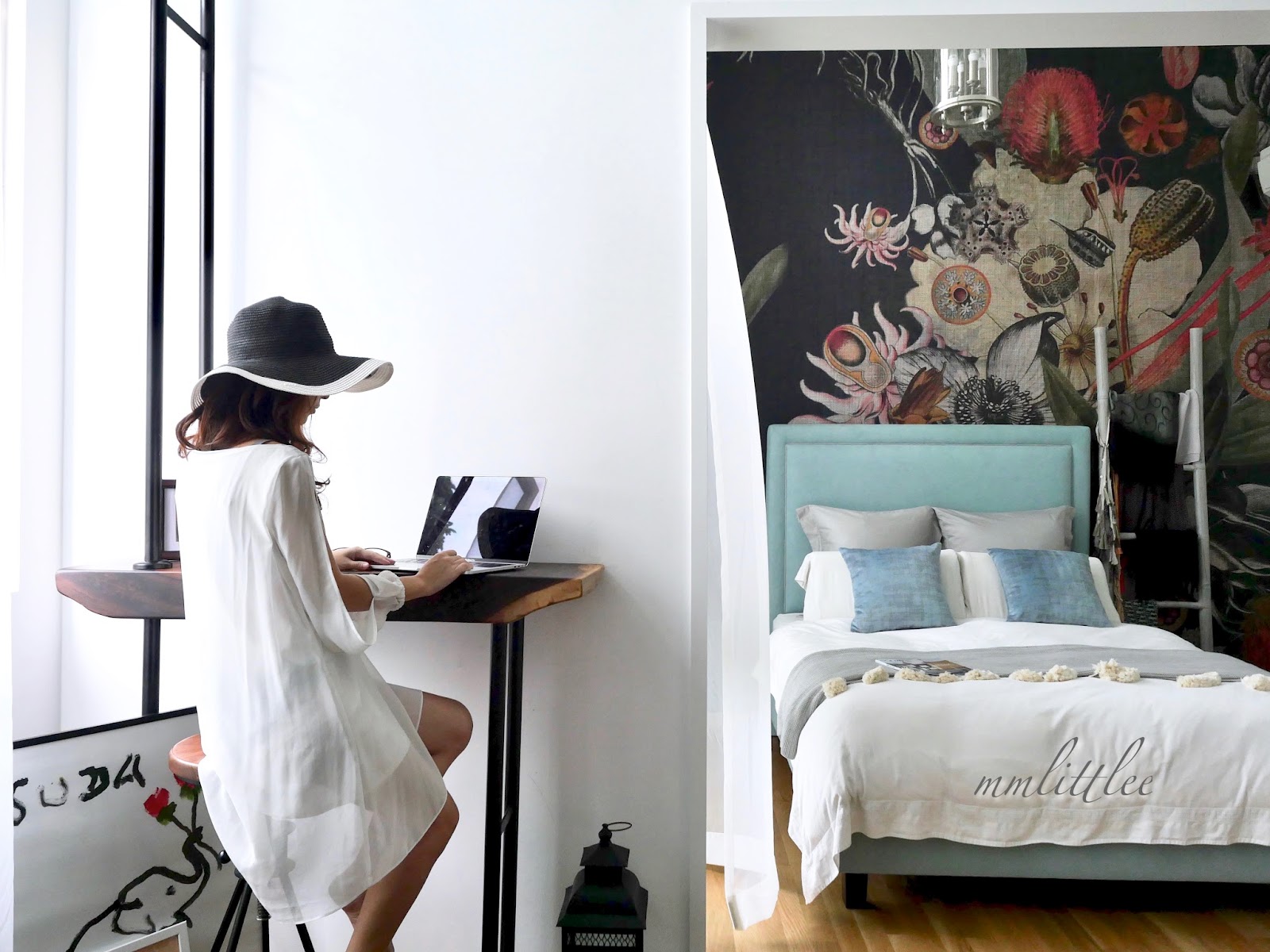 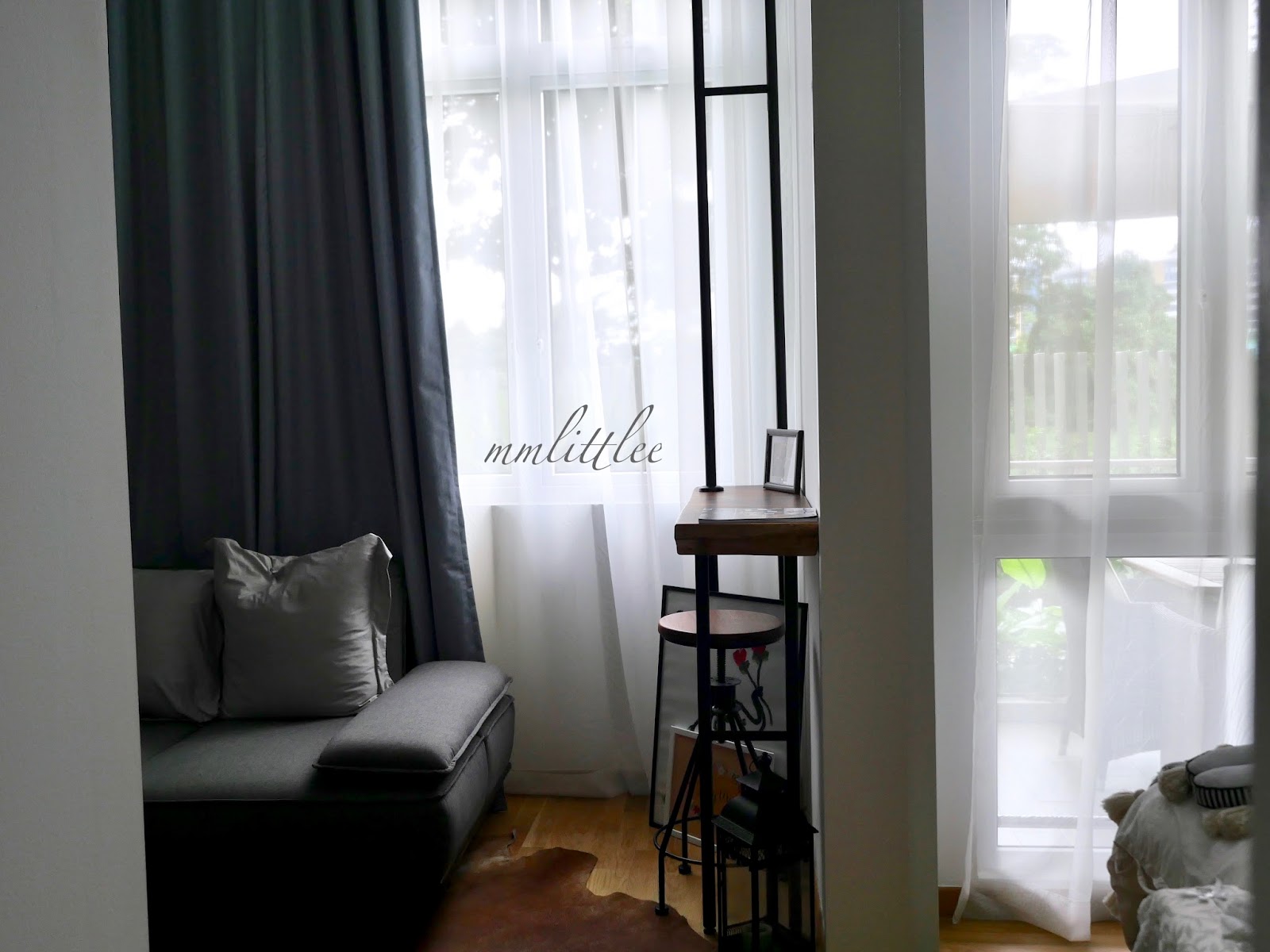 BED
I had lots of headache with regards to the bed. We looked high and low for a bed frame we might take a little liking to but to no avail. I saw some really nice ones form Taylor B. but later realise their bed frames are all made American size and doesn't fit the Asian Queen mattress I already had.

Eventually, I had our bed frame customised from Arete Culture. They are an interior decorating firm but they also have a shop in Tan Boon Liat building which I couldn't help but walk into. Beautiful place and my eyes laid on the one and only bed in the shop.

I was excited to find out that it was customisable from colour of fabric to piping, height of head board and bed. I could even decide if I would like the mattress to sit on top of the bed or in a pocket! We decided to have the mattress sit on the bed because previously when it was in a pocket, lots of hair get collected along the sides *eww*

With that, I got our bed made in duck egg colour! I couldn't ask Meyer for his opinion when I signed my name on the bill. He was on-route to Japan and absolutely uncountable! This must be the only big ticket item I had ever bought without consulting him and it was nerve-wrecking! I was so afraid he would disapprove of it.

Thank goodness it looks good with our wallpaper! 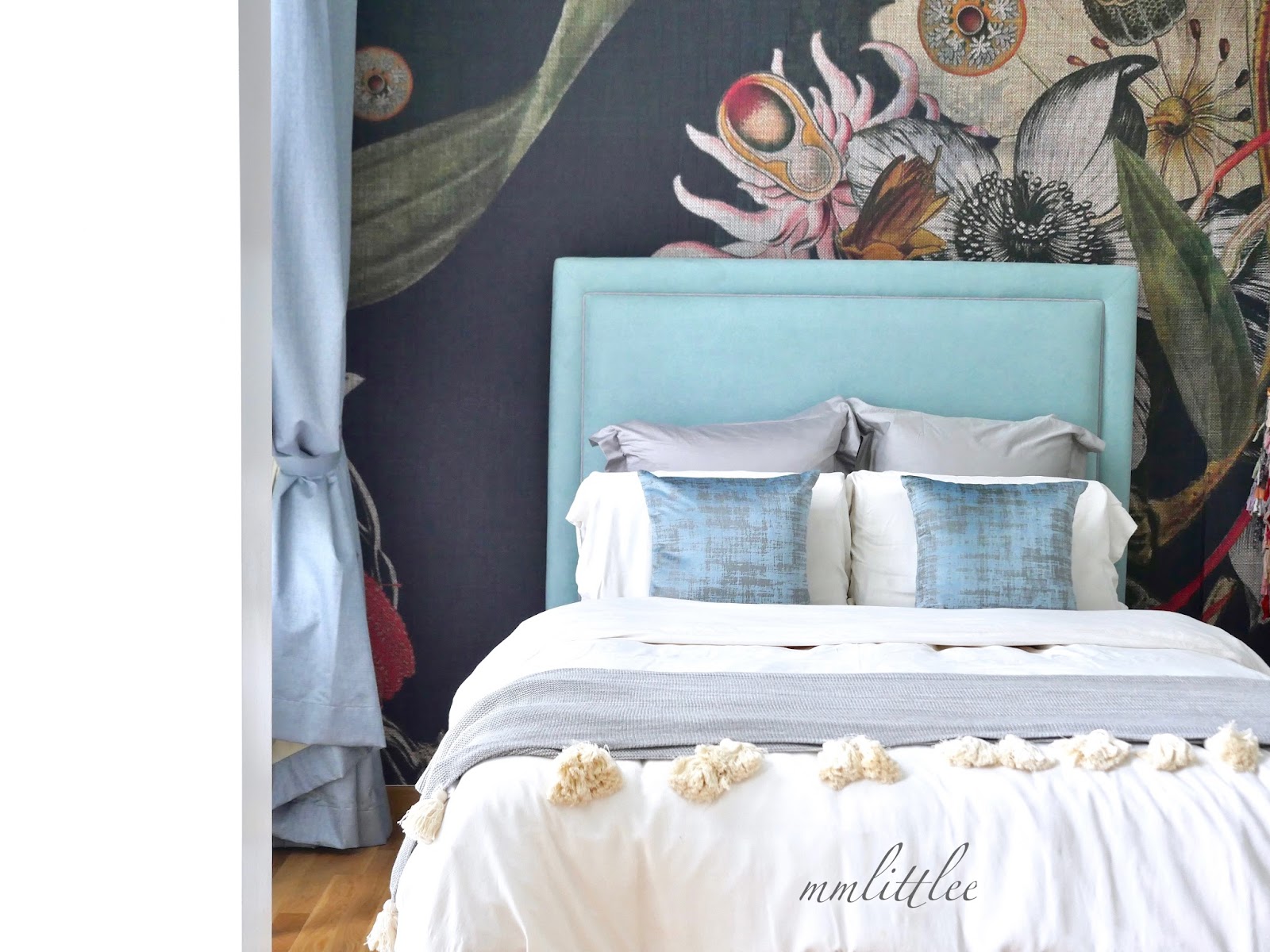 We gave up the largest wardrobe in the house to construct a TV cabinet to put this huge-ass 55-inch LG OLED television my husband wanted for his man cave. I gave up my wardrobe space for him. He had better appreciate it because I am now living on limited space for the clothes I have.

His philosophy is, "Less storage space equates to less junk." So my clothes are junk lah. Anyways, okay. I agree to live with the little amount of clothes I already have.

We chose a sofa that is versatile for sitting and lounging too! With the backrest pushed forward, it becomes a regular sitting sofa. When we push it back, we lounge with our legs up watching Netflix late into the night. Also, the kids [both of them] get enough space to sleep side by side for afternoon nap! Love this gorgeous find we stumbled upon at Origin Home.

This is the Prodigy in fabric! Although I really like leather ones, the price tag was too much for us to handle.

In the past, we spend little time catching up on the tele because the Bom Bom Bom sounds from blockbusters [in the living room] wake the children up. Now, we get to watch movies as loud as we can and it disturbed not sleeping child in the house! 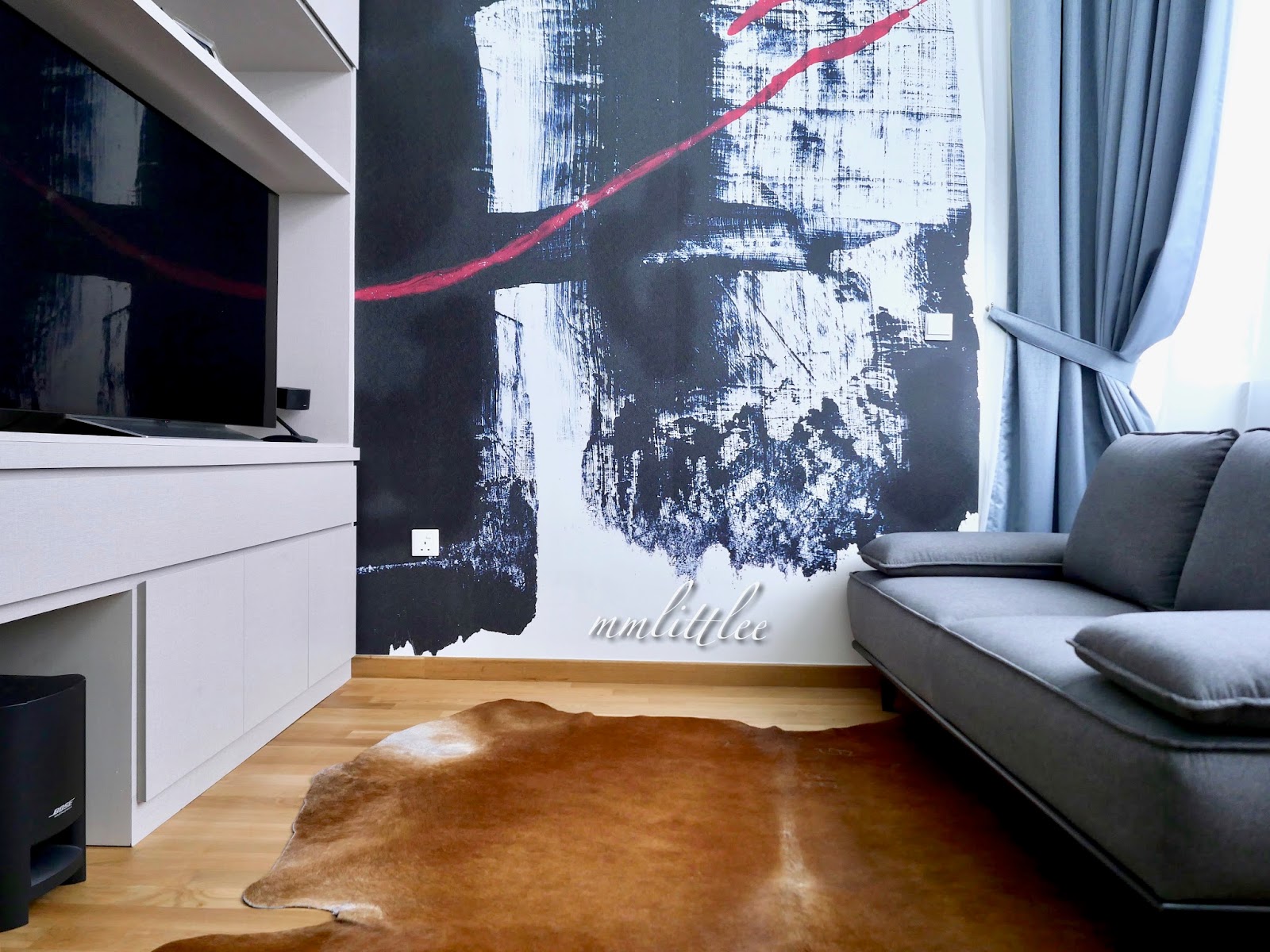 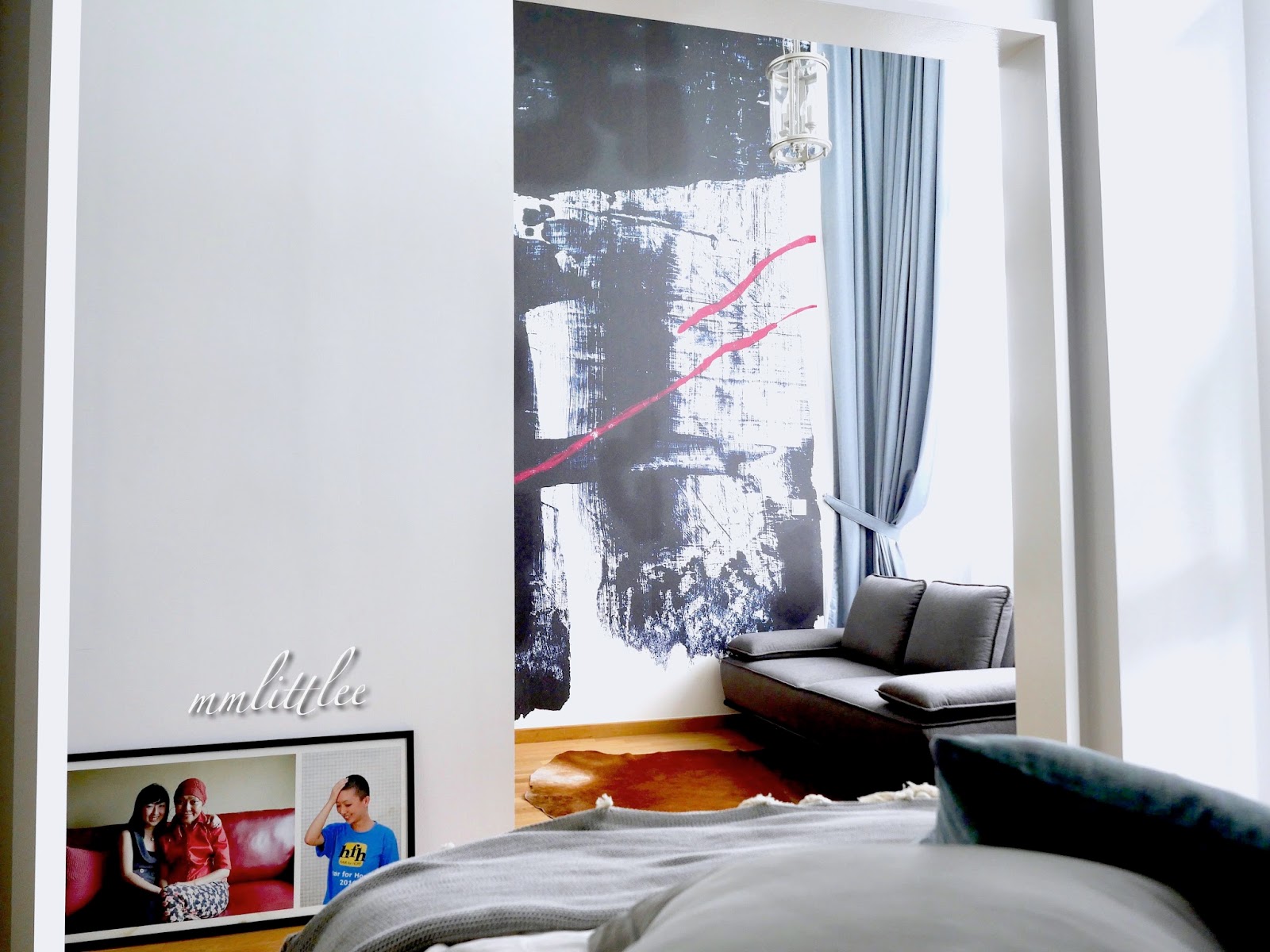 A stay at home mum, blogging to widen her social life.
We want to echo the sound of love through our lives to inspire other mothers alike.
Email Post
Labels: family home layerplay mmlittlee家 renovation robin sprong small spaces