Skip to main content
Labels
Posted by May October 14, 2016

What To Expect: MRI for Children

There is nothing to worry about but I found myself fretting over Ewan's empty tummy. He was required to fast six hours before MRI [Magnetic Resonance Imaging is a test that uses a magnetic field and pulses of radio wave energy to make pictures of organs and structures inside the body] and that would mean his last solid or milk feed would have to be at 5:30am. Unfortunately, at that time he would be sleeping. If I choose not to wake him up for a 5am milk feed, he would have fasted 15 hours instead of six when he enters the capsule for his procedure! I was blaming myself at 1am, in the wee hours of his hospital admission day, for not thinking this through in advance. If I had requested for a 2pm scan, he could still have breakfast in the morning. Oh mommy mommy.

I decided to wake him for a cup of milk at 5am just to give him the food his stomach needs. A 15-hour fast [last fed dinner] would be too long and I did not want him to starve while waiting for his 11.30am appointment. I had to risk having him fully awake at 5am but concluded that the milk will do him more good. Thankfully, he fell right back to sleep. It was I who was kept awake from anxiety. Frankly speaking, MRIs are safe and patients will not receive radiation during the examination. I knew as well that sedating him is necessary since he had to be in the capsule for an hour maintaining a single position. In other words, he cannot move if we wanted a successful scan. 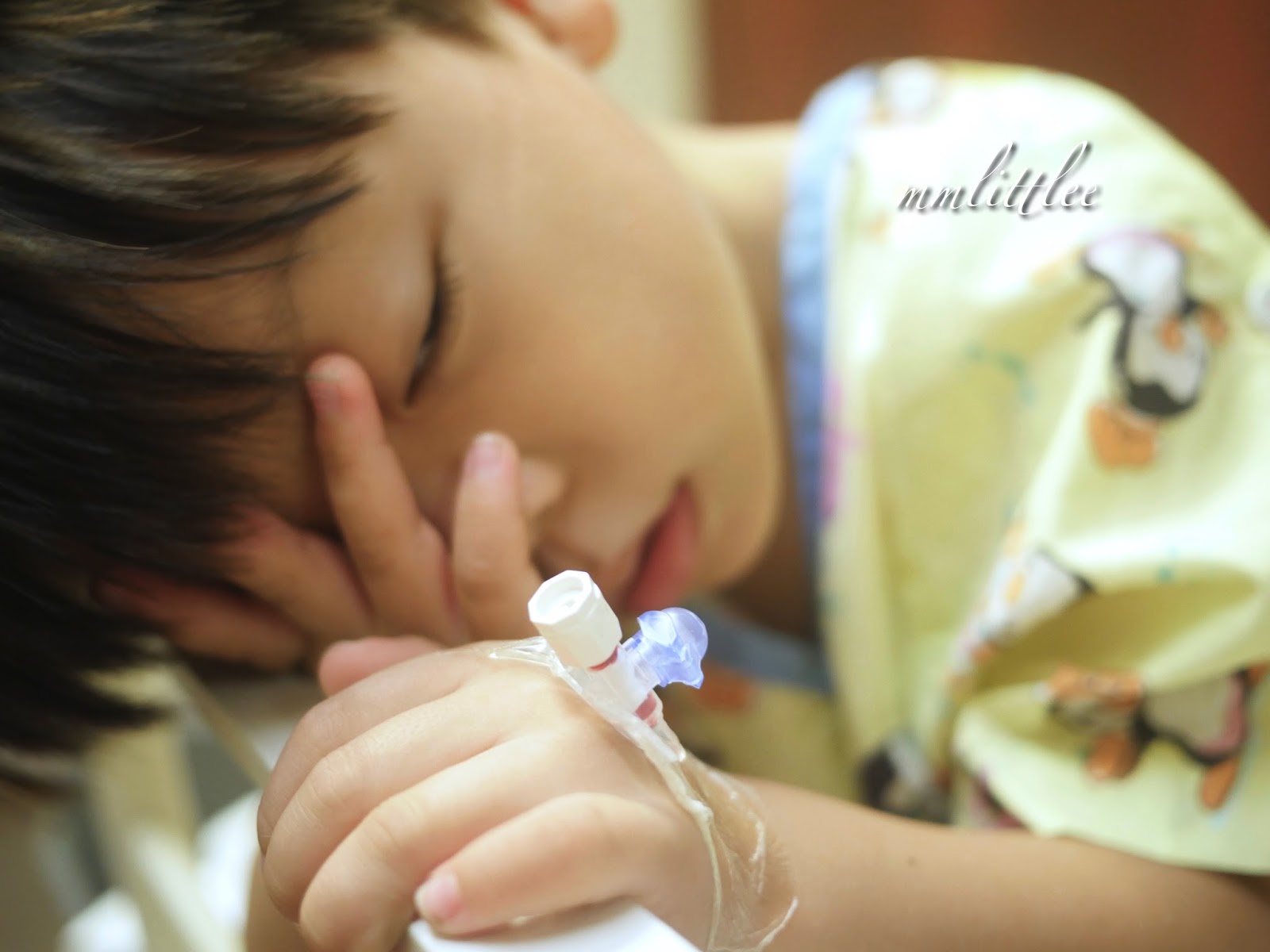 Now why is it that Ewan was scheduled for a MRI? We found a red spot on his back in [I don't exactly remember] July. I passed that off as a mosquito bite. Well, it looked like one. I did not raise it up to Meyer and he finally asked me one day, "Did you notice a red lump on his back? It seems to be there for a month already." I nodded and we decided to bring him for a check at the paediatrician's. It is a 2cm lump which can be felt rather distinctively when you run your hand down his back. We were advised to seek answers from a Neurosurgeon and that sounded rather frightening because hey! It's on his back and not his head? Why do we need to see a Neurosurgeon? 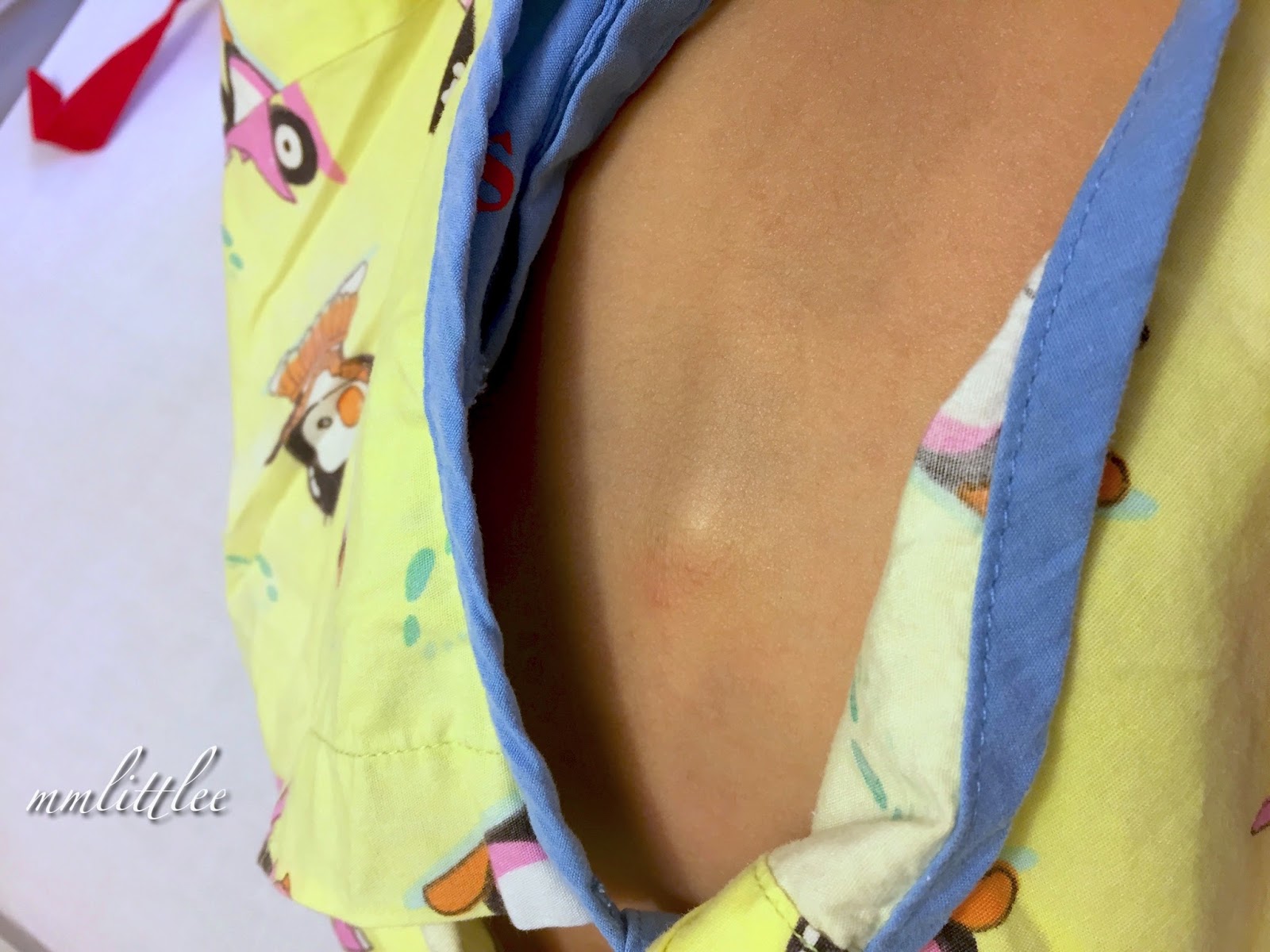 Unfortunately, this lump found its "home" right smack on Ewan's spine. Word: Spine. Nervous System. Brain. Paralysis. Yes, ok. We will make that appointment with Dr Tang Kok Kee. However, our Paediatrician did mention that it looked like an uncomplicated case of a fatty tissue lump because it was soft. Still, we shouldn't take things for granted and give it a proper check. If it was not on his spine, he would be less concerned.

After a talk with the neurosurgeon, we decided to go ahead with the MRI procedure to give us all a peace of mind. He too thinks it is not a cause for concern but a scan will provide us with a lot more answers than a naked eye examination. Unfortunately, X-Rays won't do it for his case. They really wanted to see if this particular growth has grown beyond his skin and into the spinal cord. 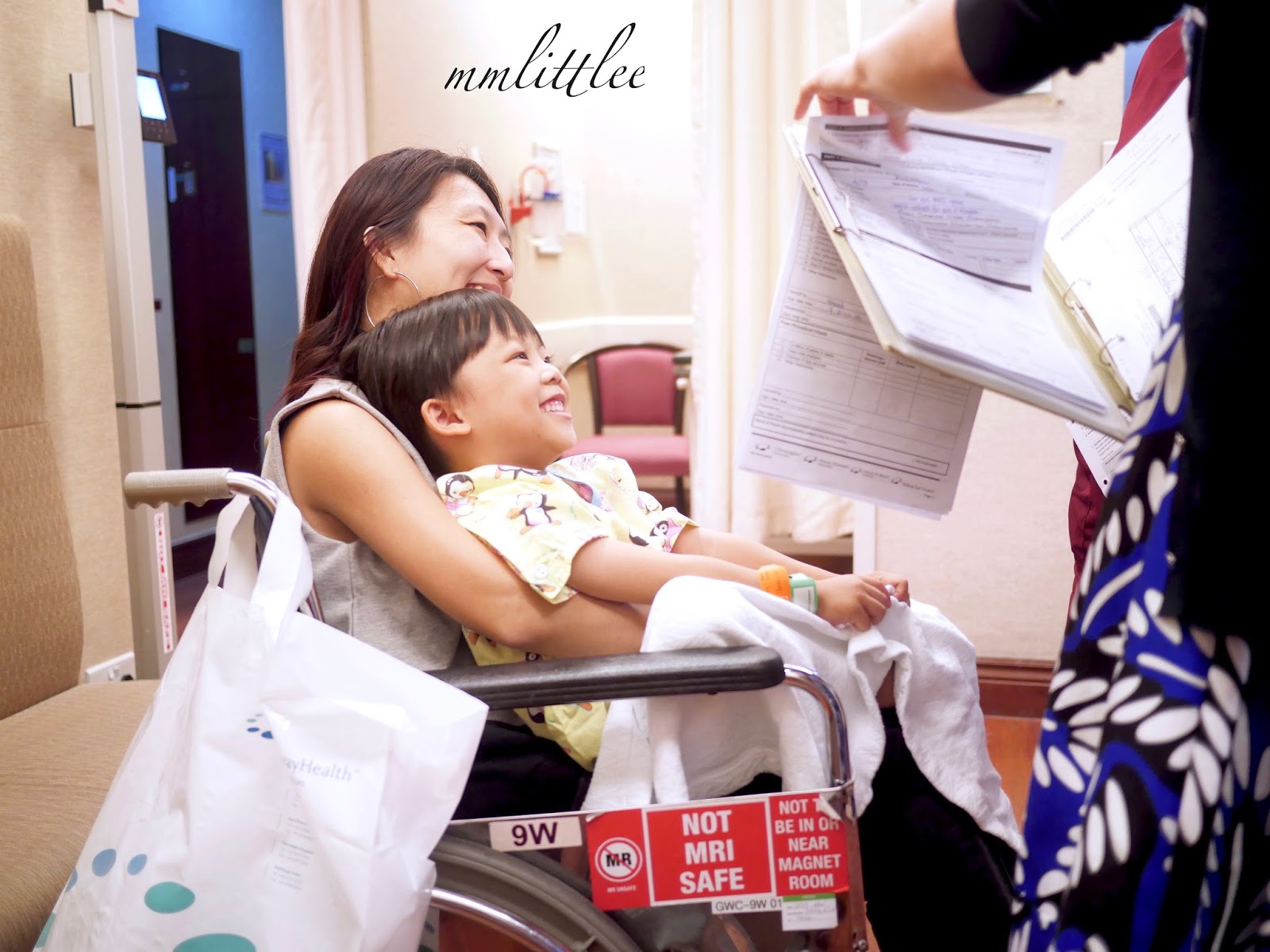 Ewan was very brave! He walked into the procedure room fighting like a ninja turtle and showed off all his martial arts moves. I was glad they allowed access to one parent to enter the room with him and daddy could watch through a glass window from the computer workstation. Ewan was told to lie on the movable examination table that slides into the center of the cylinder and he obliged inquisitively. It helped that we were all making this whole experience like a game! Since he decided to be a Ninja Turtle, we spoke to him in Ninja terms and I roused his curiosity by telling him that he was going into a spaceship.

Note: Request to enter the examination room with your child because a parent's support is beyond compare. Everyone will have to leave the room when procedure commences. 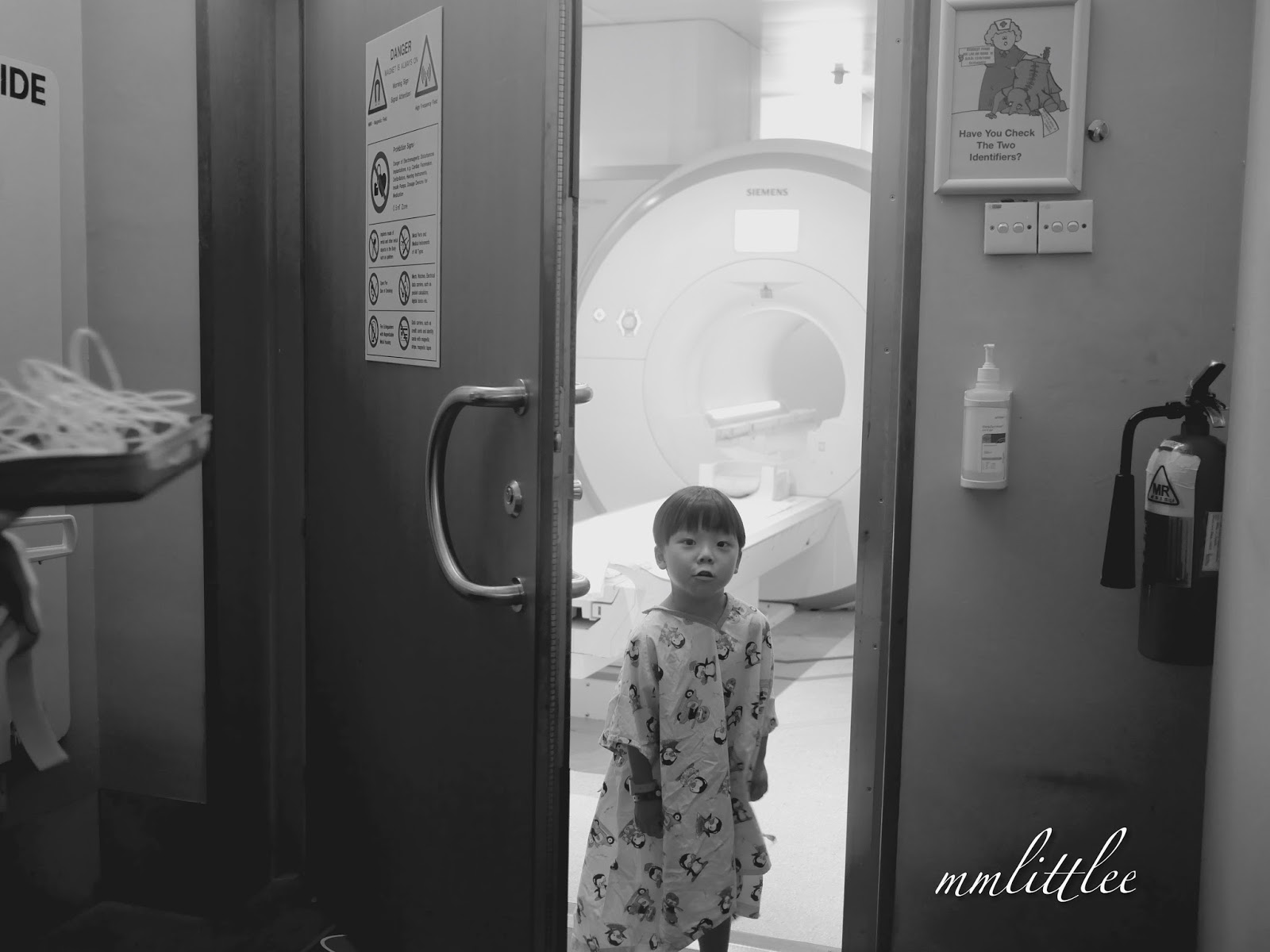 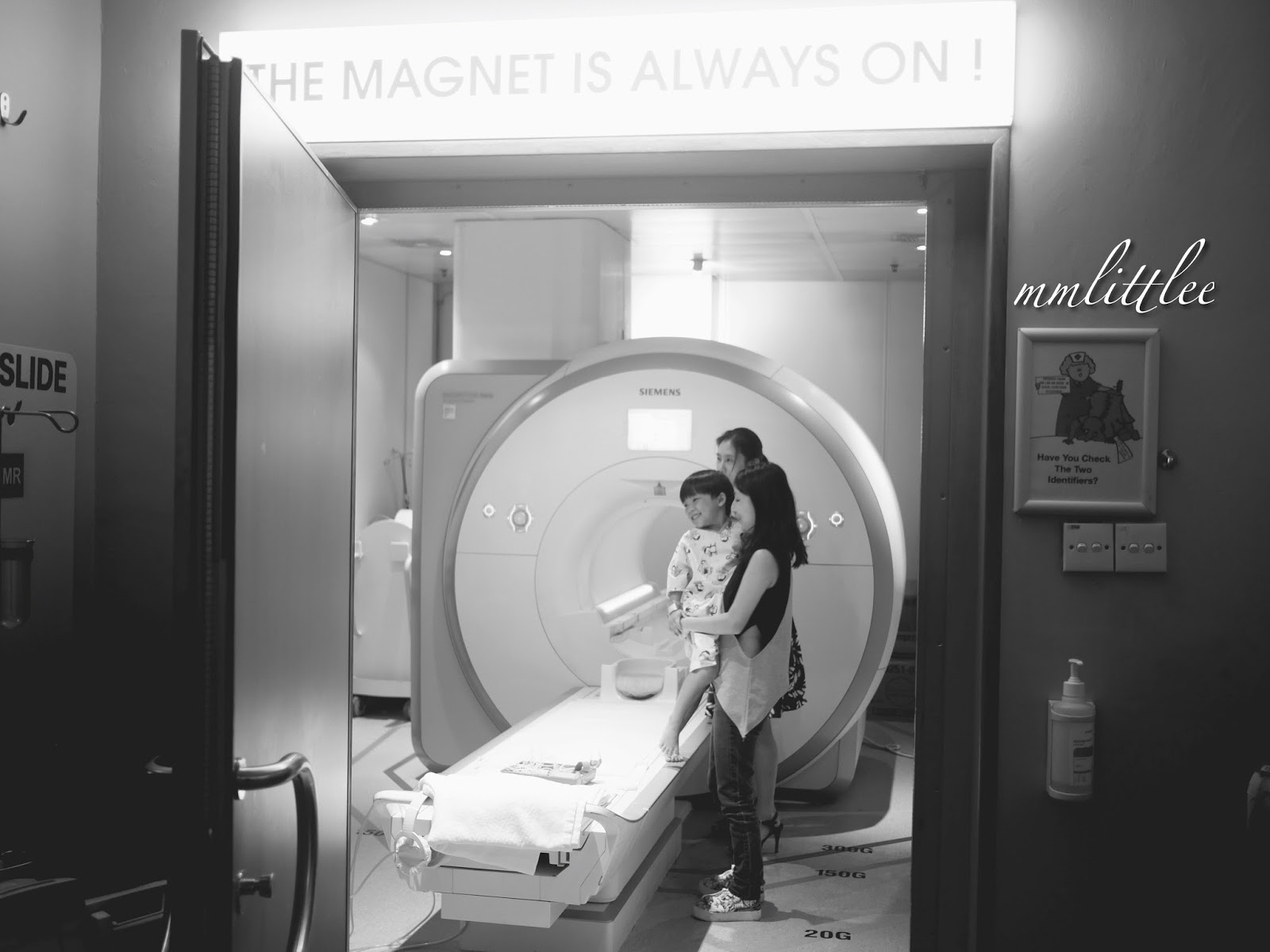 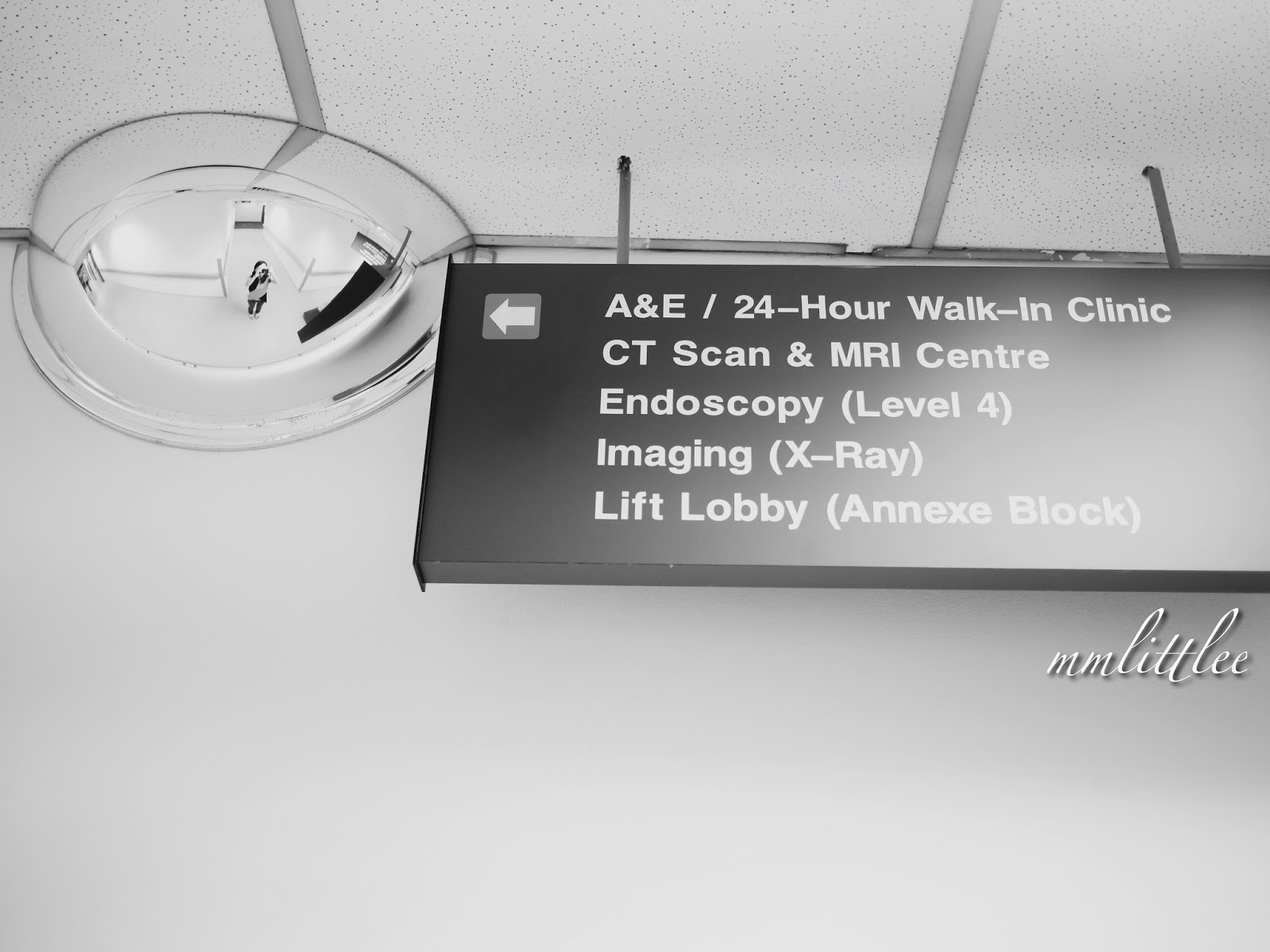 Well of course I was worried he would find the machine daunting because it was large and foreign. I was told how claustrophobic these machines can be [some say they felt like they were buried alive in there] but was less disturbed when we were given an open unit - one that has its front and back opened. To make things even better, the room was filled with soothing music. Birds were chirping in the background! I picked that out to Ewan and we listened to the sounds together going, "Ahh! Yes! Hear that bird?"

They had to put an intravenous line in him to administer anaesthesia. Ewan will be sedated intravenously instead of the use of a gas mask. We have heard about cases where children wake prematurely before the procedure or worst still, inside the MRI machine when they were sedated via a gas mask or a drink. I definitely do not want to traumatise him should he wake half-way through the examination.

I was certain my cry baby was going to struggle and wail when the IV line goes in. He has a extremely low threshold for pain. Surprisingly, our animated conversations about ninja turtles and spaceships got him totally distracted. The team of nurses and doctors were amazing! They spontaneously joined me in my plan to divert his attention and amazingly, Ewan did not realise his swift and professional anaesthetist had the line in within the second! No cry, no yelp. I was amazed because I had to change my IV line every 3 days for a month while I was pregnant with Faye and it hurts like crazy.

Halfway through the sedation process, Ewan suddenly stopped talking and his eyes rolled back. He gave a yawn and fell asleep. He was given a child-sized headphones and we were most relieved to see him being well-taken care of.

It took a little more than an hour for the whole procedure, longer than usual. Usual is 30 minutes but I was not going to question them. We shall wait for the results; for Dr Tang to speak to us later that day. 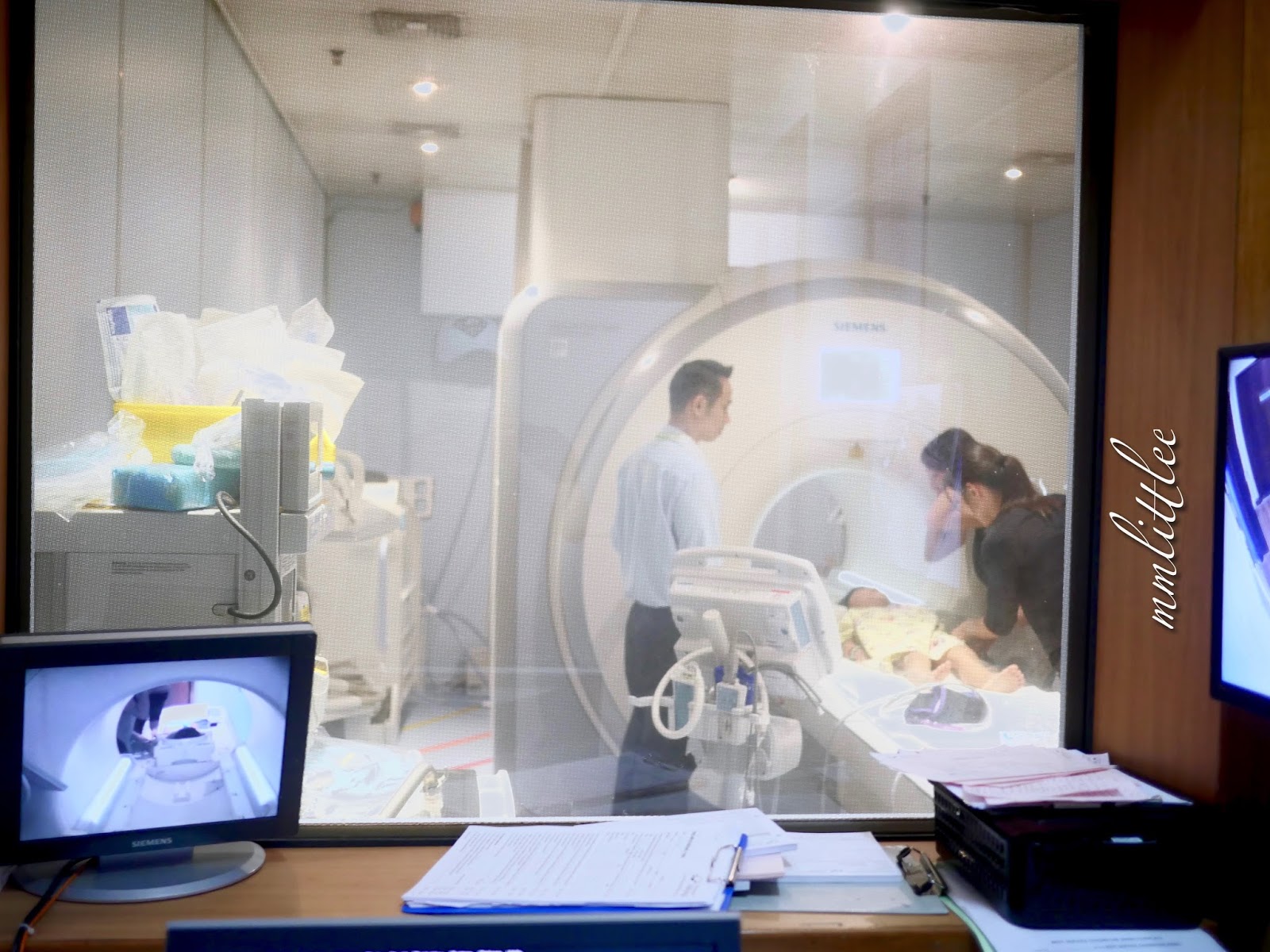 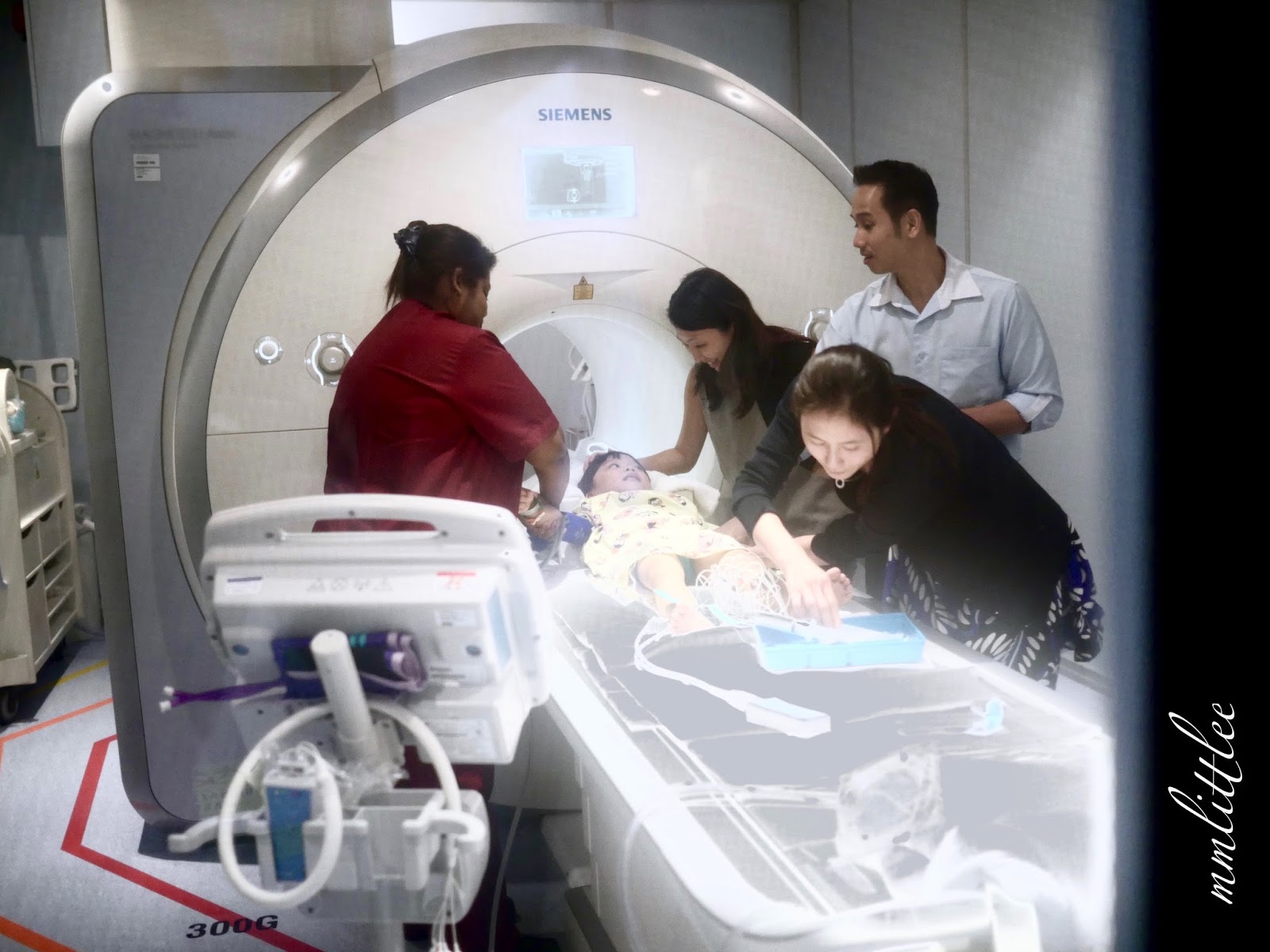 Additional Notes:
A to Z about MRI
6 Things to Know About Local Anesthesia with IV Sedation

By the end of the procedure, all the nurses referred to him as Ninja Turtle and Faye was "Ninja Turtle's sister". I was tempted to let him sleep through the dosage but was advised by the nurse to rouse him awake instead. When we nudged him, he woke immediately but was slurring in his speech speaking incoherently which we found hilarious *woops* but was super glad he had no side effects like vomiting after he woke. 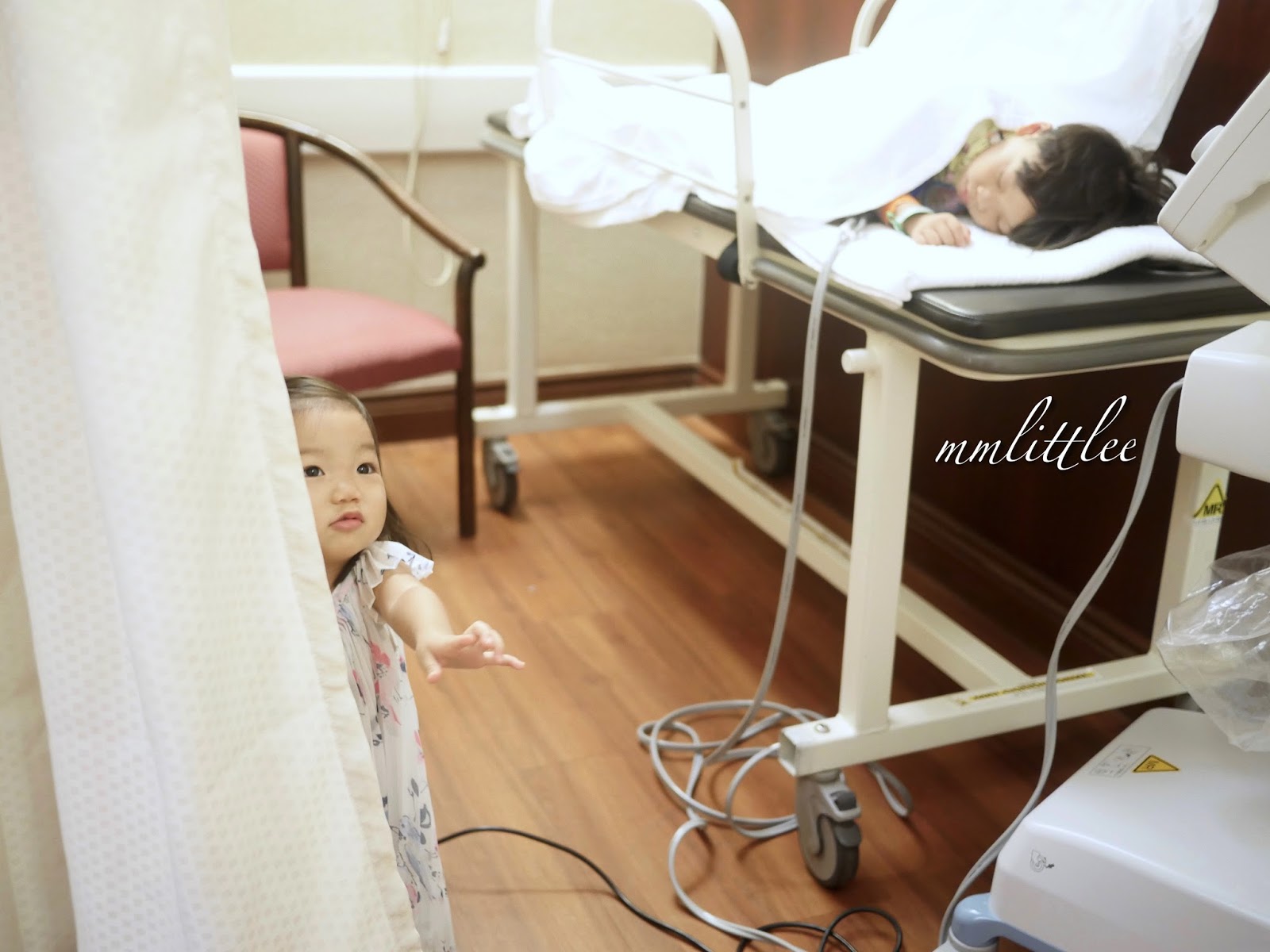 He spent the whole day complaining he was hungry and we just fed him with everything possible that was presented on his tray table. Then suddenly he had a nose bleed. He never ever had a nose bleed since birth and this was new. However, we were told that MRI procedures do not cause the nose to bleed. It happened just once and no possible reason could be given - unless we called in an ENT. We left it as it was but learnt from the nurses that a cold press on the forehead and iced cold water will help with nose bleeds! Take note!

The neurosurgeon came in after dinner and presented to us with favourable results. The lump did not go deeper into the spinal cord so it meant that it is superficial. However, the doctors could not determine what it is unless removed. Yet they do not want to touch it if it is not causing him any pain. The biggest relief is that it is not cancerous. I, on the other hand, wished I could just get rid of it for good. It isn't a nice thing to look at when I bathe him and it definitely isn't nice on the hands when I give him a back rub. Then again, listen to the experts right? They probably did not want to aggravate it.

"Will it go away?" I asked.
"No." the doctor shared. "It will or might grow bigger with age. Only if it gets painful or infected, will we remove."
"How does an infection look like?" I had to know.
"When the lump is very red, pimple-like or has pus." our neurosurgeon suggested.

I do hope we will never have to come to that.

Did I prepare Ewan for this hospital admission? I did not. I chose to tell him about it when he woke up this morning. I made it sound so exciting and gave him full reign in packing his own luggage that he cheerfully exclaimed, "I want to stay there for three months!"

I told the daddy I volunteer to stay and his reply was, "It isn't your choice. Your son might choose me." Oh no. That's true since daddy puts him to bed every night. Then it sounded like I won the lottery when my son chose me to stay over! But bless his sentimental heart. He stretched out his hand to his dad as he walked away from his room, "Daddy but I will miss you. I will look for you all over the hospital and I won't be able to find you." He continued with his "I miss daddy and 妹妹" chant until he fell asleep. A total role reversal from his sister who said, "Ok. Goodbye See You Tomorrow Mommy." 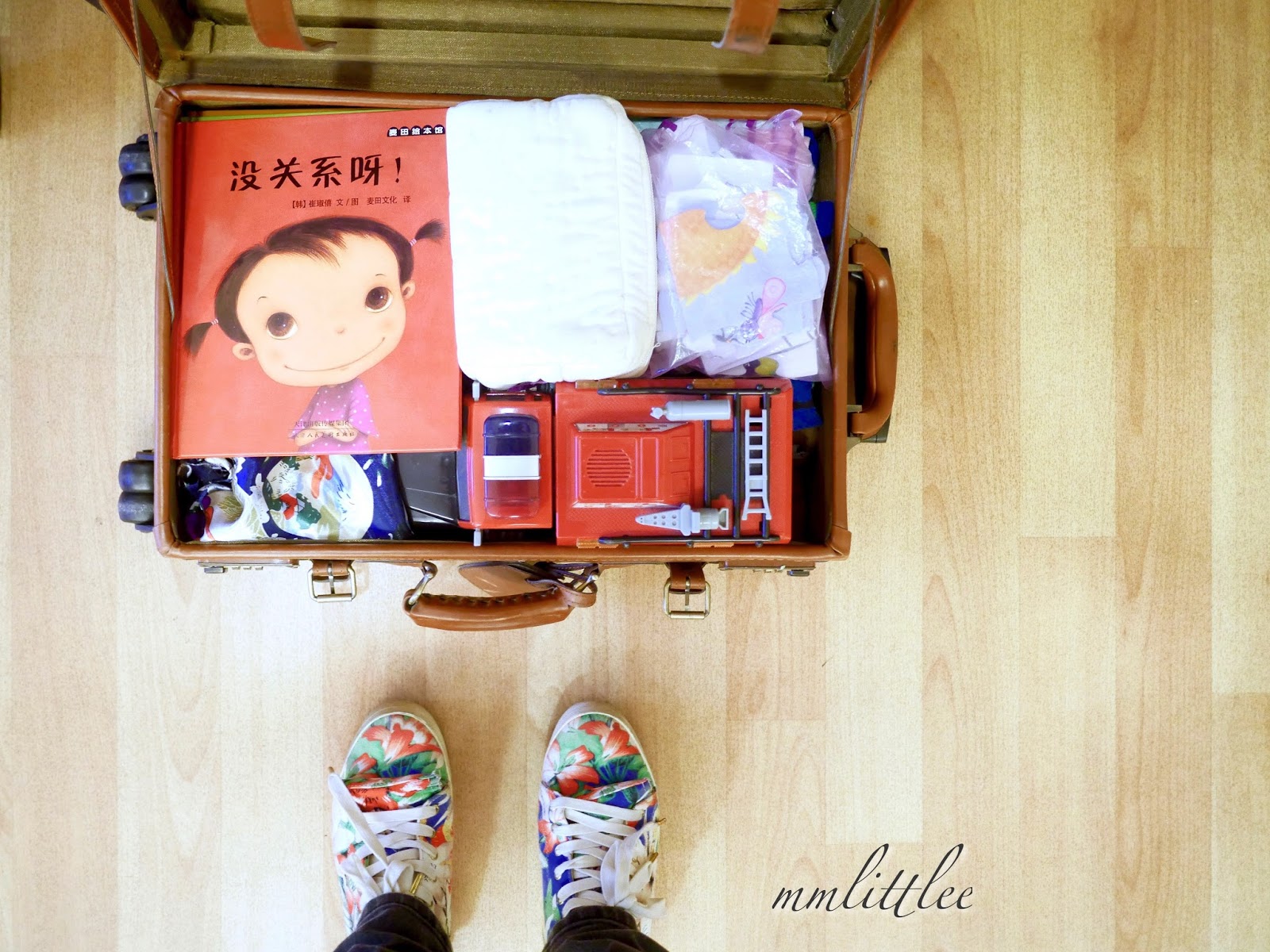 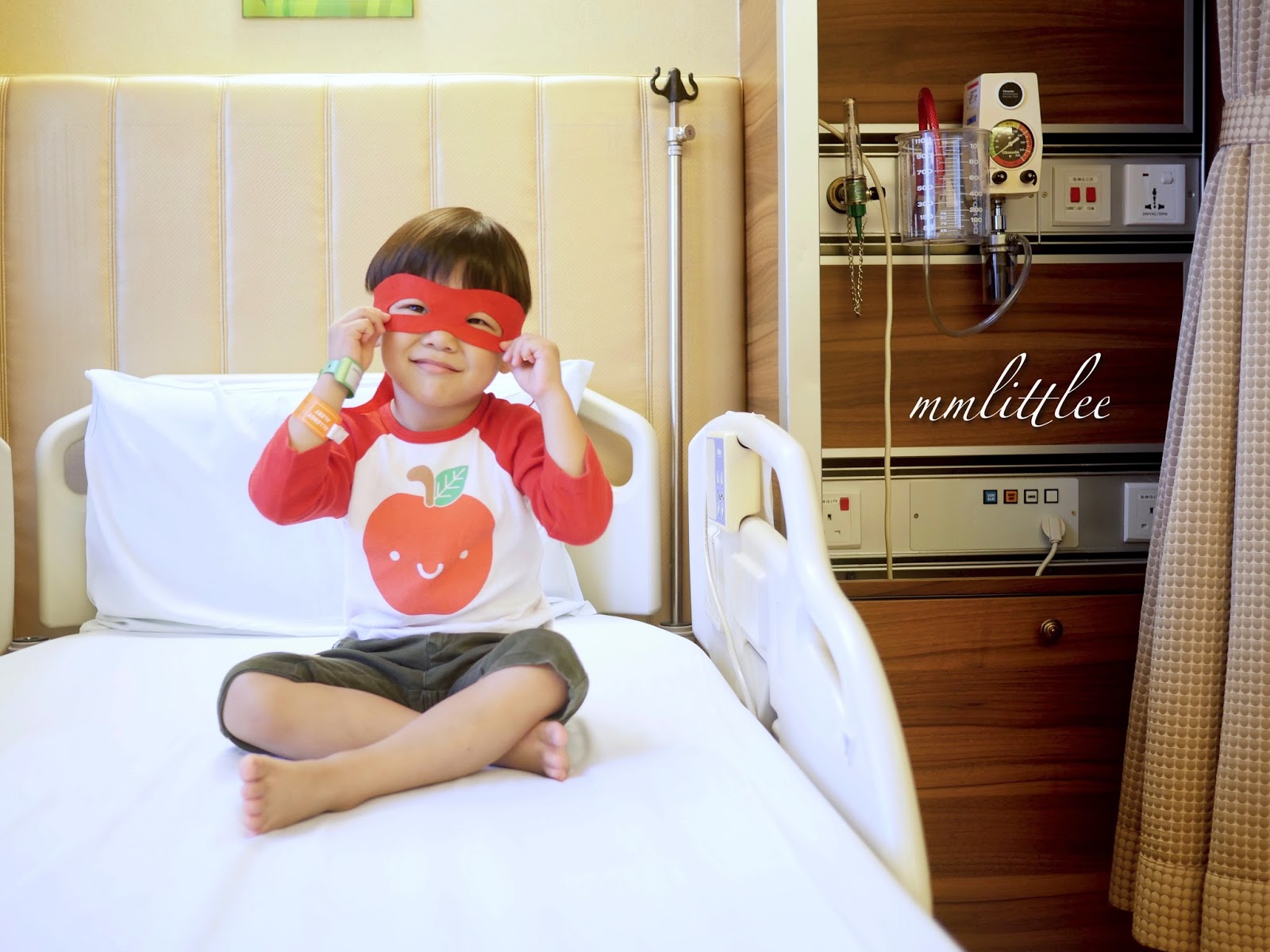 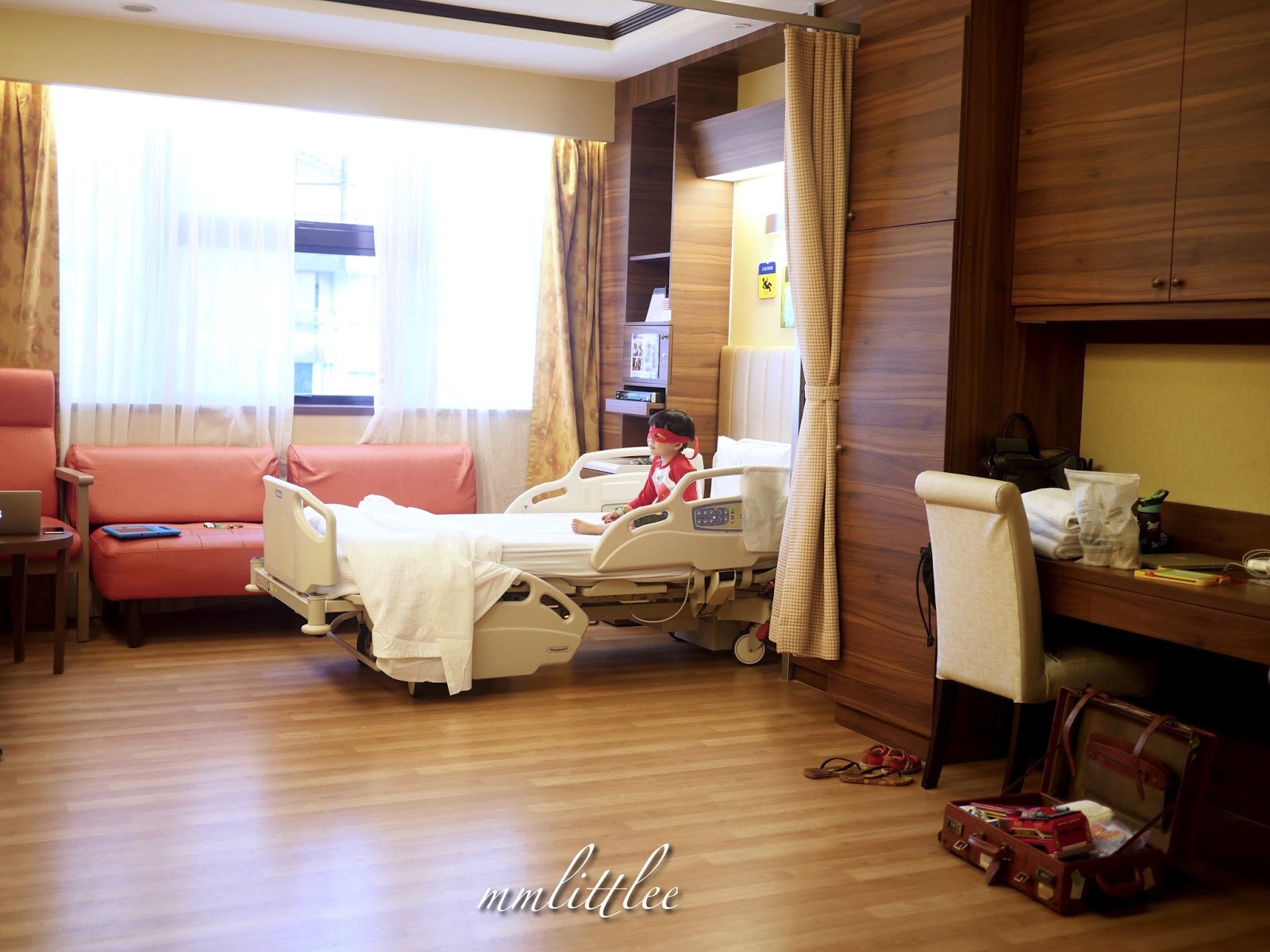 Dear parents, what is it to worry about if your child is going in for a MRI examination? It shouldn't be the procedure because it is non-invasive and their mental health will not be affected since they will be sedated. I think what I worried most was, "Will I be able to handle the look on his face when he slips into unconsciousness?" and of course "Please tell me that the lump is not affecting his spinal cord."

Anaesthetist
Dr Lynn Hong
Dr Hong was the anaesthetist who attended to ewan and I liked her. She is a mother so she can relate and she chatted him up with ninja turtles. Her distraction skills are good but I must agree we worked together to keep him entertained during the IV insertion. I was surprised Ewan did not let out a yelp when she poked him. Either he was very distracted or she's very skilful.

Neurosurgeon
Dr Tang Kok Kee
Profile
Dr Tang speaks very fast but he will give you his time to explain in detail should you have more concerns. A personable doctor who chats up with you about anything at all if you are interested - society, education, marriage and parenting!

Read Life's Tiny Miracle's personal experience on MRI For Adults
As I read David's encounter, I recall how my mother shivered in fear before every MRI examination back when she was diagnosed with Cancer. She shared with me how frightening it was and I could not empathize. To me, it is just a body scanner. To her, it was terrifying. 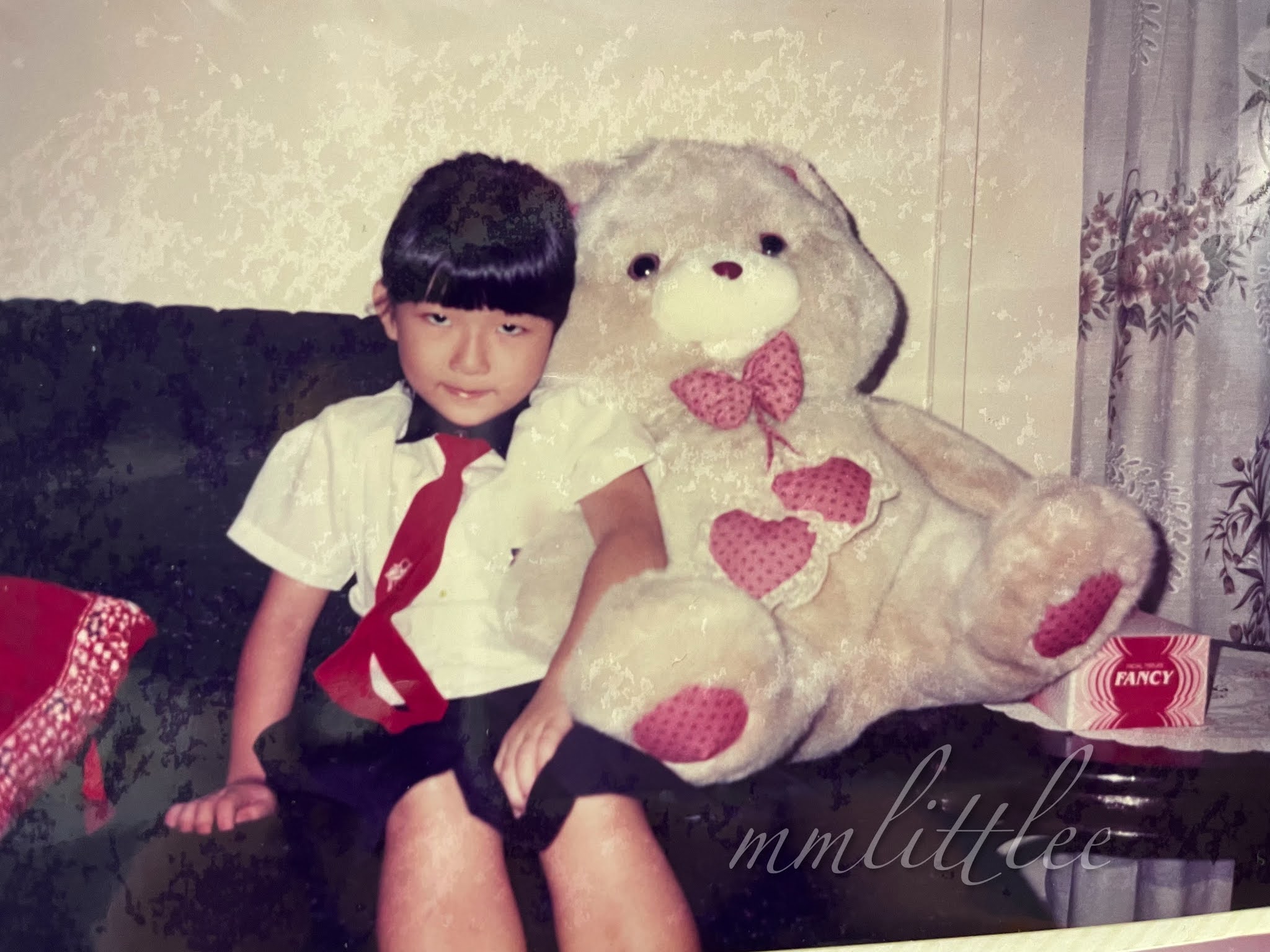 In Primary School, I Had A Perpetrator Waiting For Me In The Toilet Too