Skip to main content
Labels
Posted by May October 28, 2016

The world of LEGO® NINJAGO™ will open at Legoland Malaysia on 4th November 2016 and my little Ninja Ewan was looking forward to it the whole week! He is crazy over anything Kung Fu, Ninjas [Turtles or Gos], Superheroes and all the Hah-Hah-Hai-Yah followed by punches and kicks. So when he found out that he was going to be a Ninjago warrior for this exclusive media launch, he was out-of-this-world excited!

We made our first visit to Legoland Malaysia in May 2016, just five months ago and the park was building the NINJAGO™ facility. It will be an indoor themed area with The Ride being its main feature. This is Asia's first ever newest technology in a 4-dimensional experience where hand gestures will command the elements of earth, lightning, ice and fire as riders vanquish the Great Devourer under the guidance of Master Wu. While we all know that a 3D experience occur in a theatre with special-filmed glasses to experience the effects, a 4D adventure may include smoke, rain, wind, strobe lights and vibration.

What a privilege for Ewan, Faye and I to be invited for the media launch of Legoland's ultimate ride this morning - the ride that will redefine the theme park's experience for everyone.

Candidly hosted by Gerald Koh and Nazrudin Habibur Rahman, the launch featured a performance by the four ninjas and Sensei Wu that got us all high from adrenaline. The drumming act was top-notch and it definitely inspired Ewan further to take up drumming lessons. Even though the sun was blazing down at us, we stood rooted to the ground flinching not a bit lest we missed some impressive Ninja stunt! 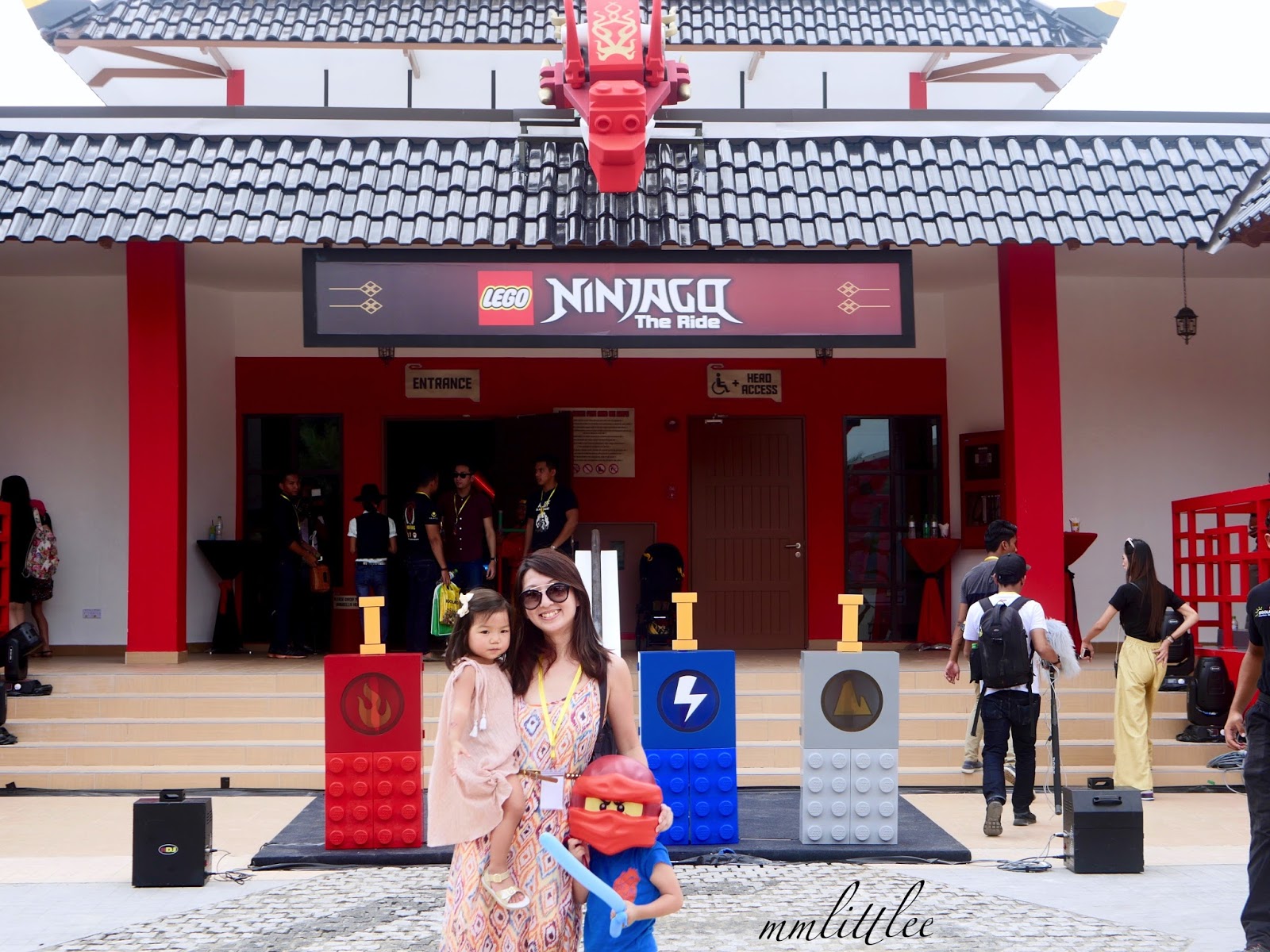 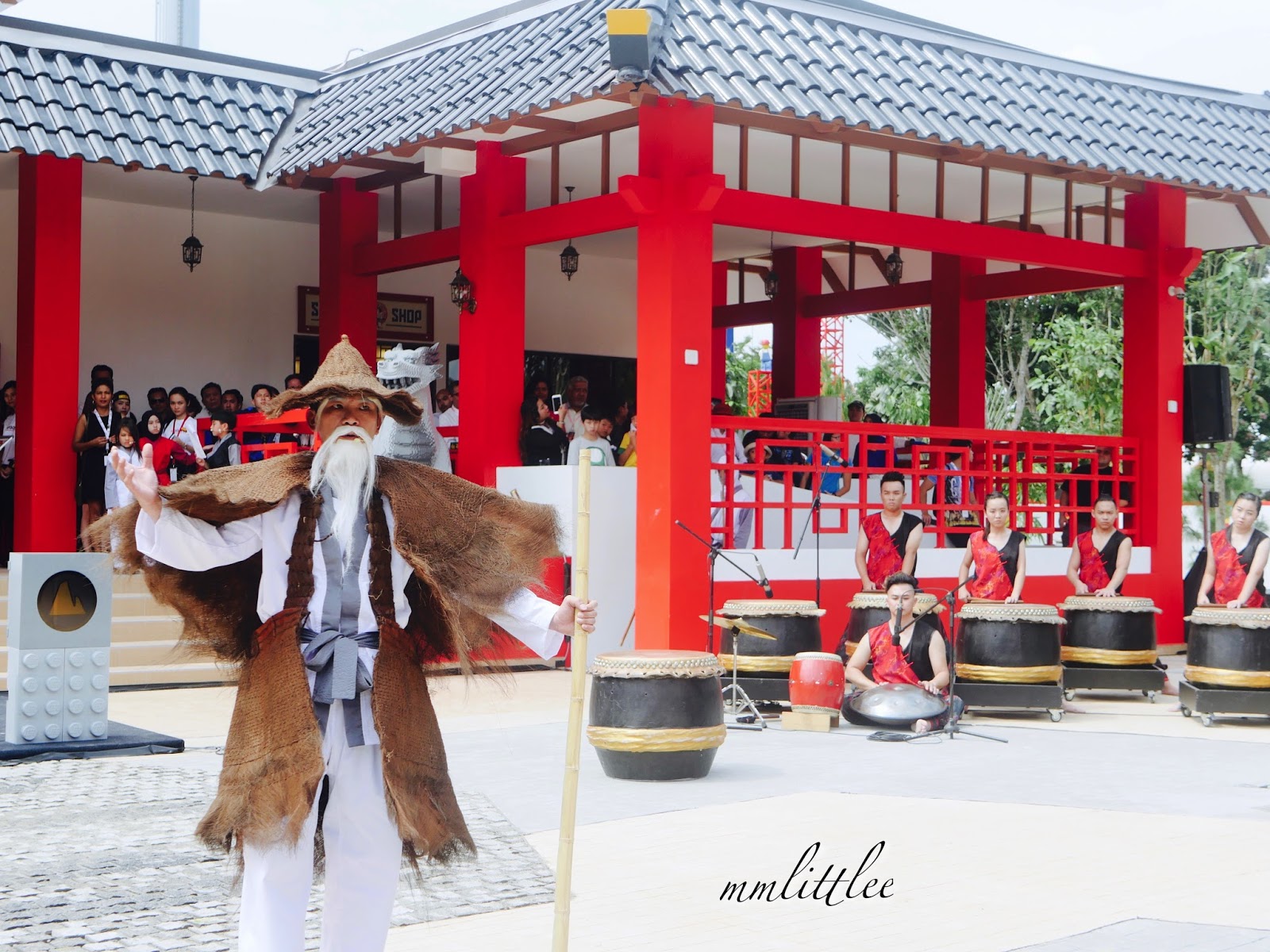 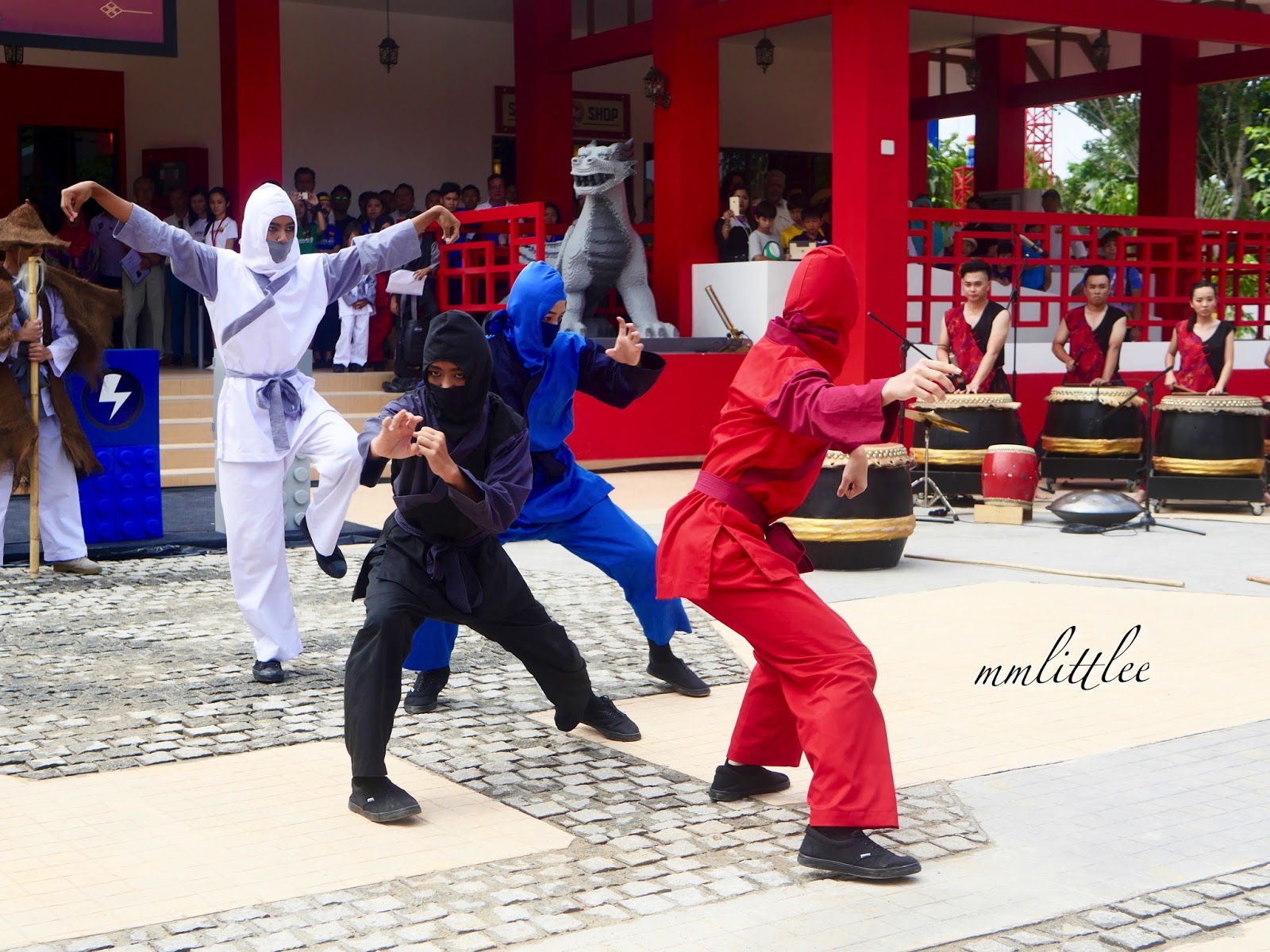 LEGO® NINJAGO™MODELS
I love the architectural design of the LEGO® NINJAGO™ World. The LEGO® NINJAGO™ models of Sensei Wu, Ninja Kai, Ninja Jay, Ninja Cole and Ninja Zane were beautifully made! I wished I was less flustered to take more pictures with these handsome props that guard the temple grounds. Why of course it was a challenge having to handle two tantrummy kids on my own, take photographs, attempt to get some filming done and socialise *pants* not to mention the hot hot weather! It was impossible to provide live updates on social media so pardon the wait! 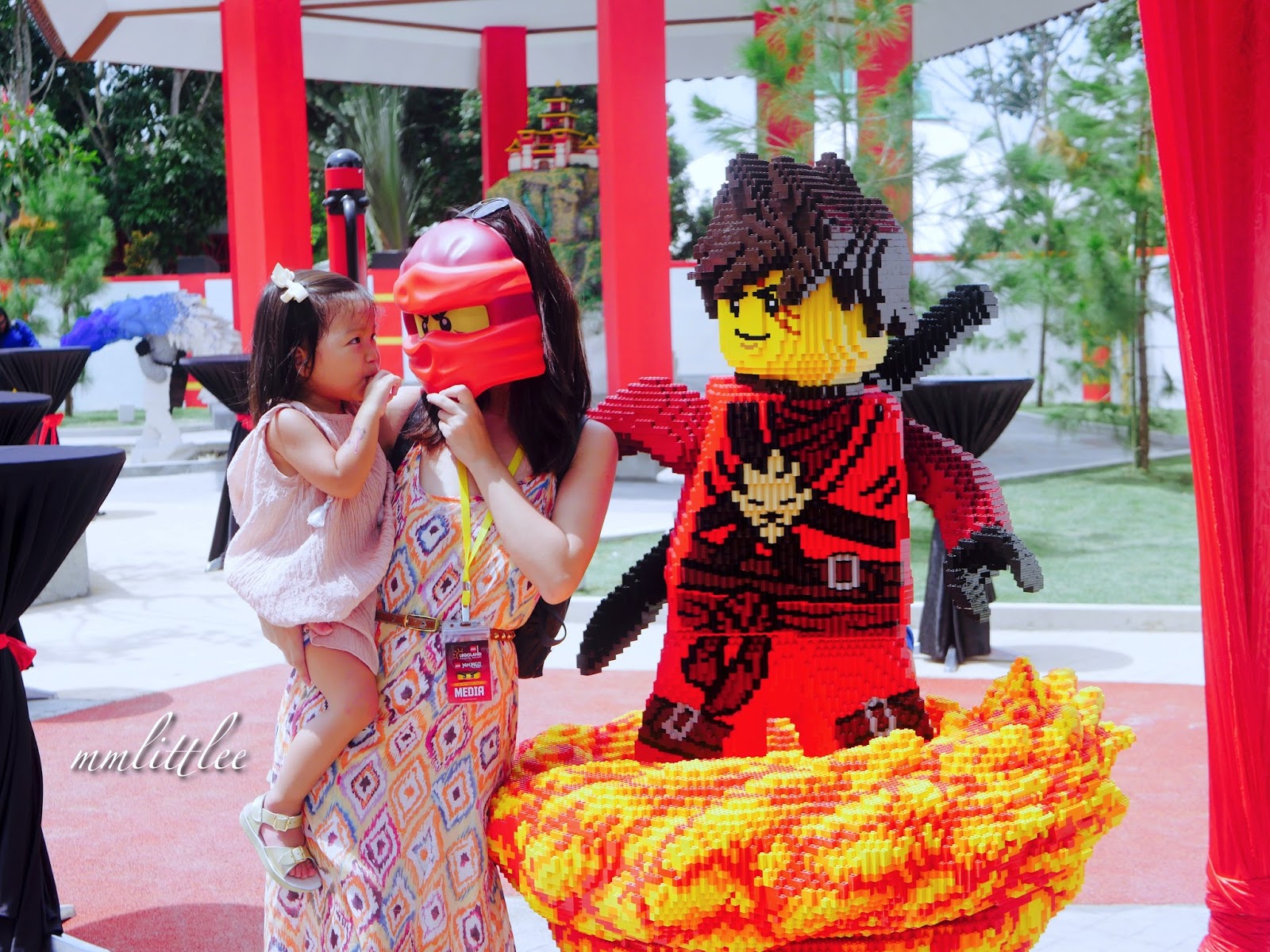 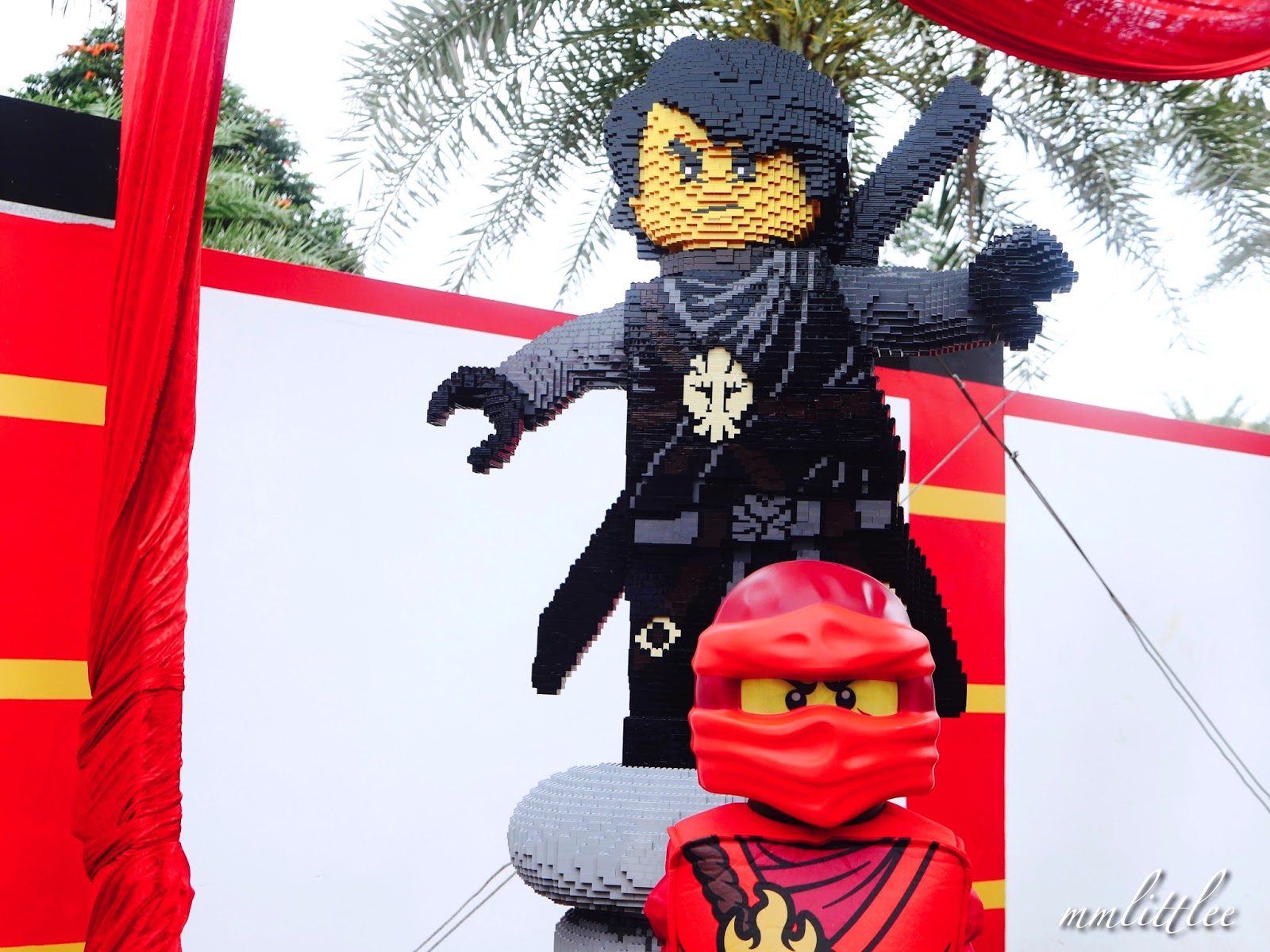 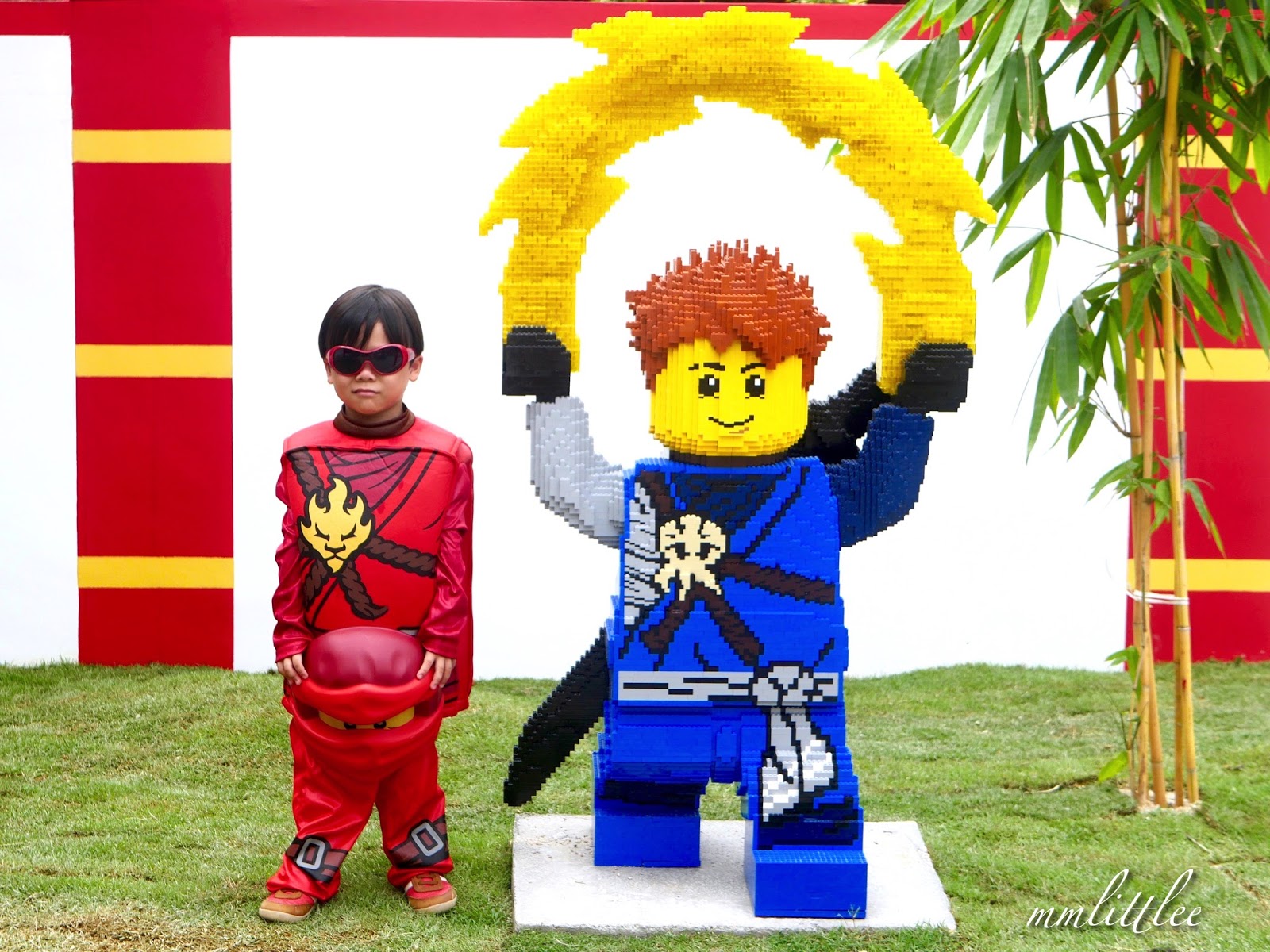 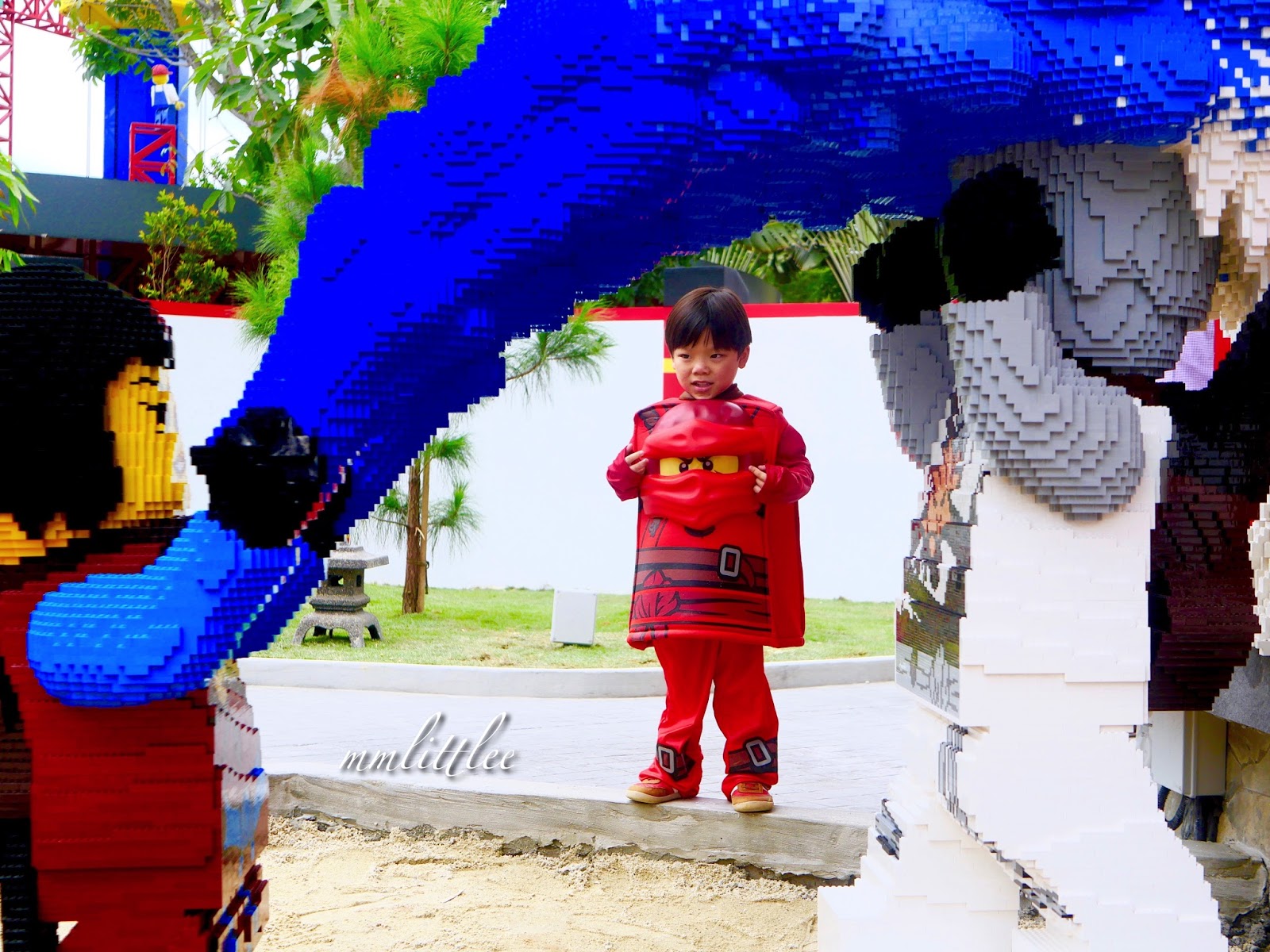 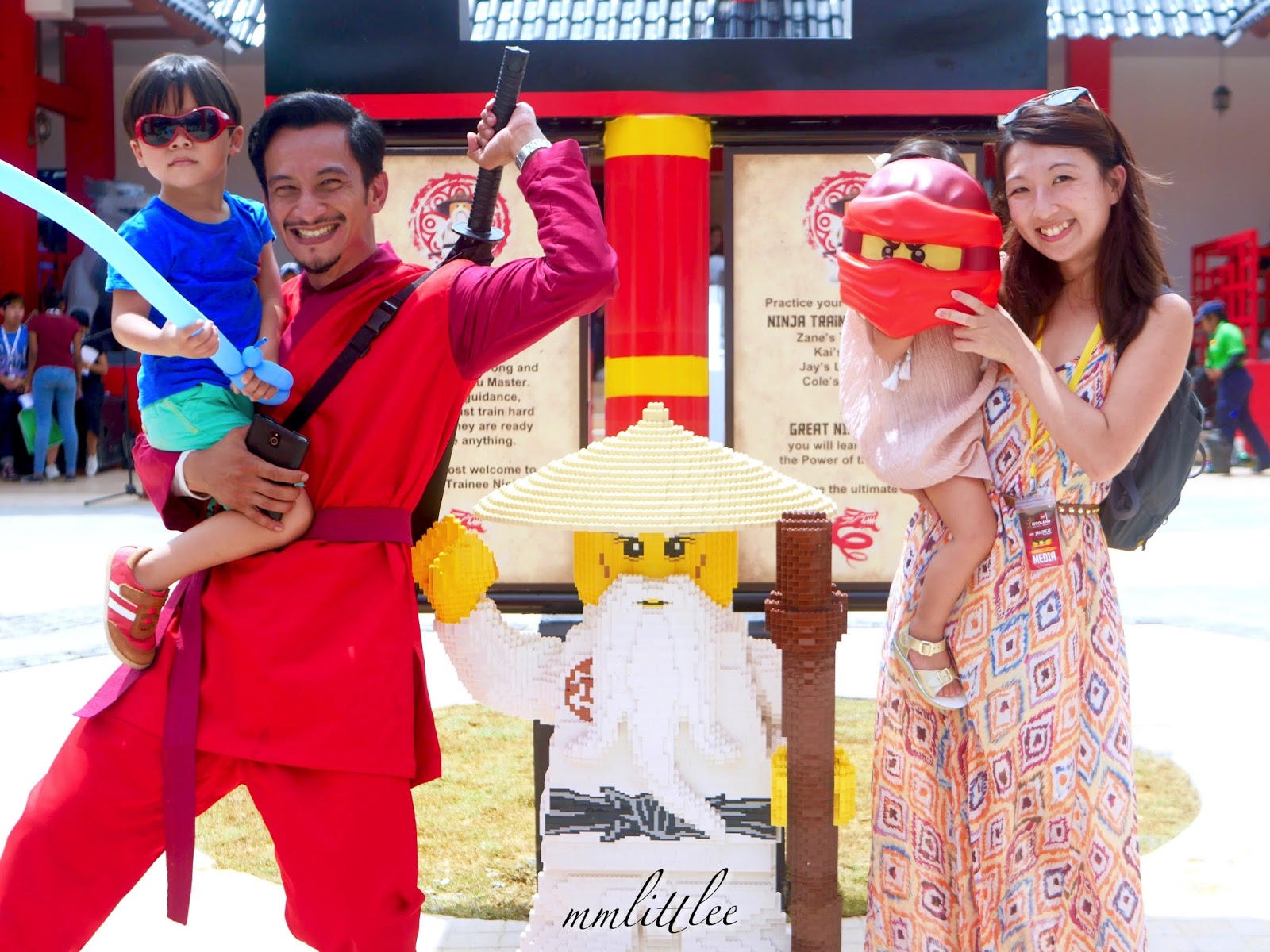 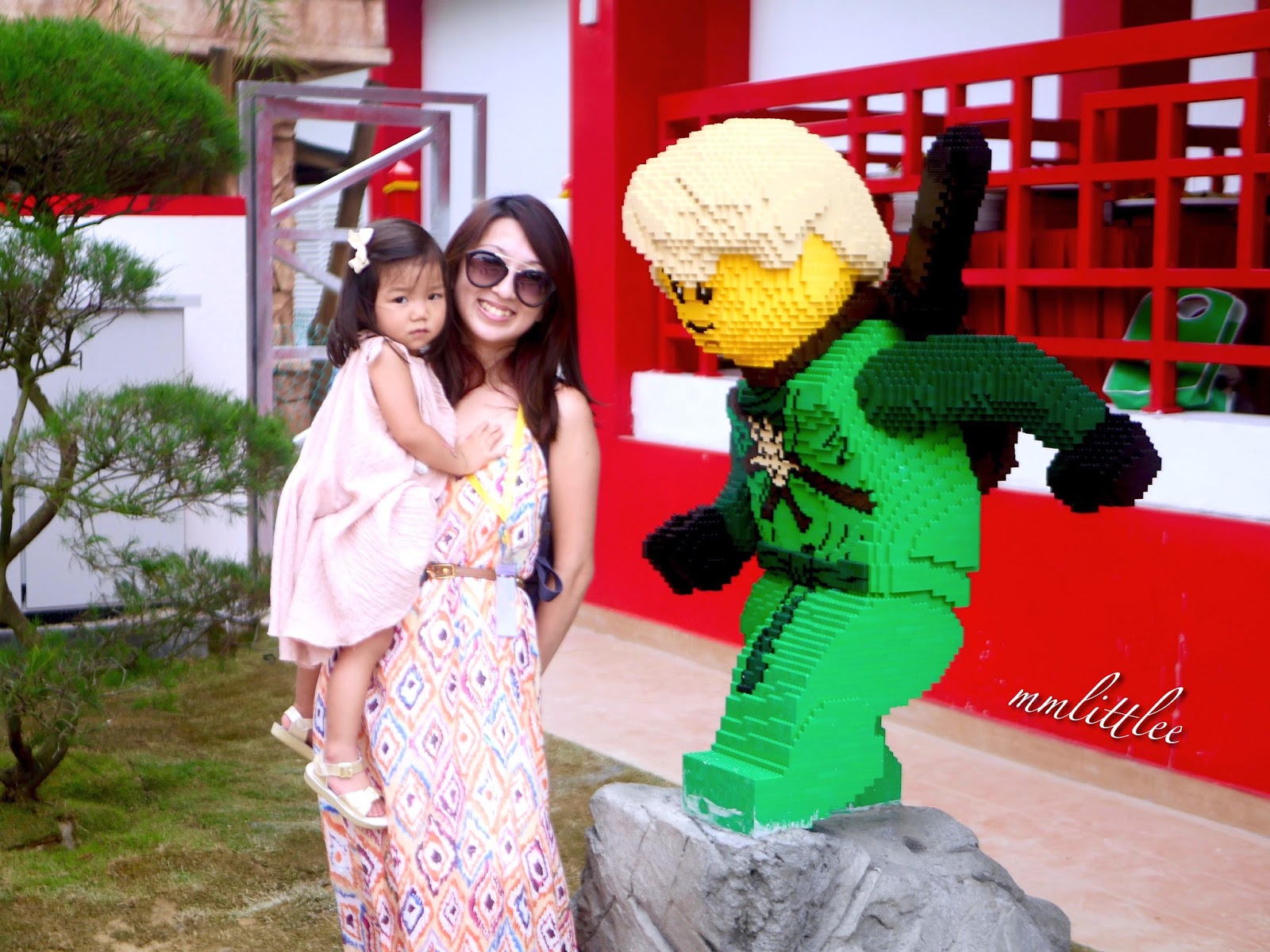 There was also three very impressive models I cannot fail to mention. There are guardian dragons, swords of the four elements and an awesome 226kg model of Ninja Nya and Zane created out of 73,6000 pieces of LEGO® bricks that took 550 man hours to build! The guardian dragons and LEGO® NINJAGO™ dragon was made out of more than 77,000 and 48,000 pieces of LEGO® bricks respectively. I am not a builder and I cannot phantom how each of these were put together! 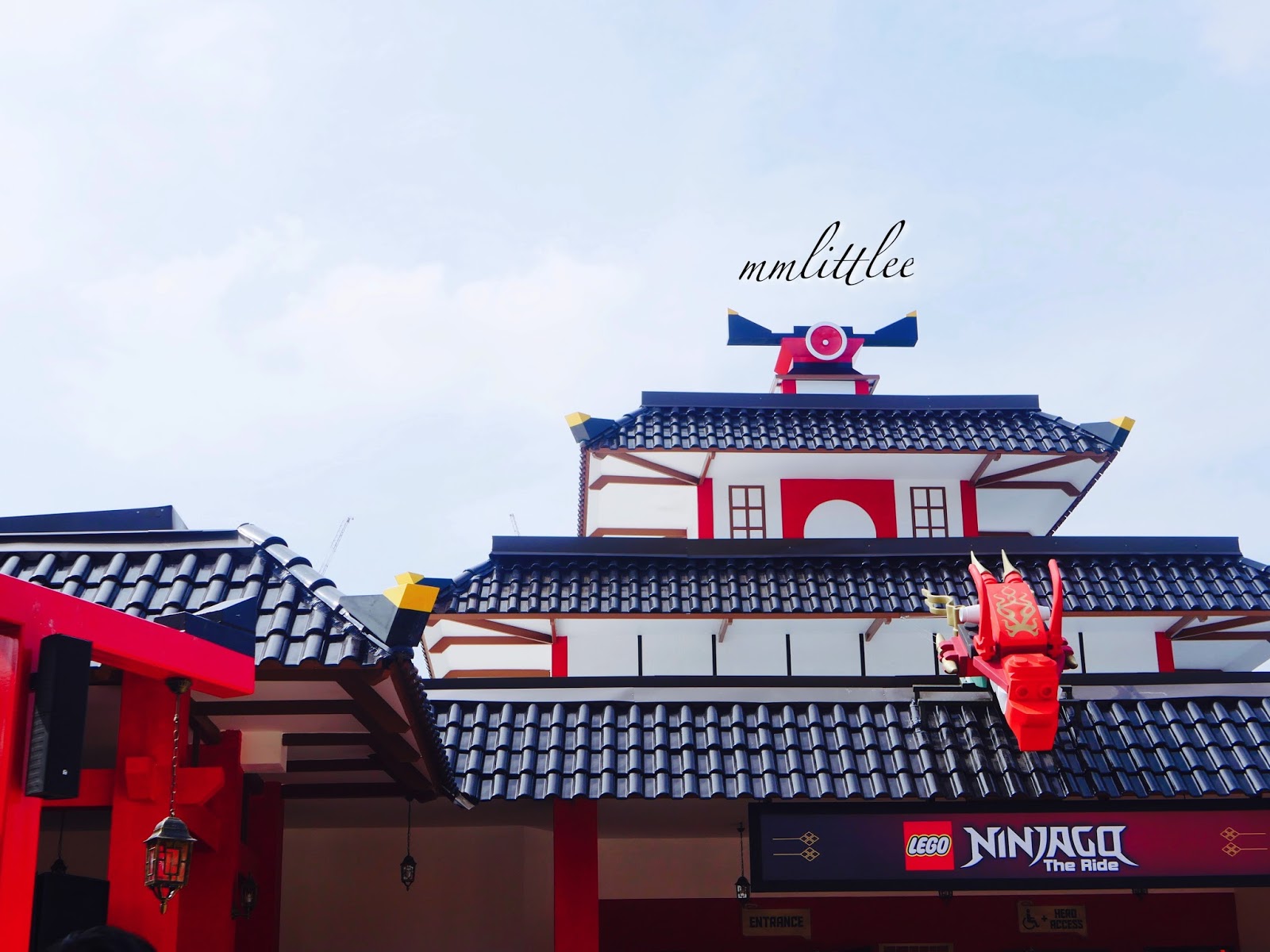 LEGO® NINJAGO™RIDE
There are eight trains in total where each train has two cars in it. Each car takes four passengers and they will be brought down the rite of passage every Ninja-Wannabe will have to undertake. There is no need to hold any props to be immersed in the game. All that is required are your hands. Using hand gesture technology by Triotech, riders are able to throw virtual projectiles onto the screen! We were terribly excited to go on the ride and especially stoked since we were the first to try it before the public on 4th November 2016! My son can finally demonstrate his Ninja skills in a real game!


Pity. What a dreadful pity. The ride broke down in the middle of our media experience. We were terribly lucky that our batch was next to go when it broke down. Lucky because we were not stuck! I think little Faye would have been quite frightened by the experience since it is an indoor ride in a darkened room. I thought something was amiss when the carriages stood stagnant for quite a while and we weren't invited to board. Those in queue were invited to leave the ride for lunch reception outside and while an hour had past, we were still not able to come back on to the ride.

It was impossible to hang around waiting without any indicative notice.

Besides, we will be returning for a holiday with the extended family next week. I will definitely have a go at it and update our experience here for your consideration.

Note: It is not a roller-coaster ride in case you got worried about the break-down we had at the launch. The cars take you on a flat ride in a circle which projects 13 ride scenes within 3 minutes and 30 seconds. There are no steep drops or sharp bends.

Ride Update 7 Nov 16: I enjoyed it and it was a like 3 minute work-out session! How so? Hand gestures are required to bust off evil, throwing darts, lightnings and fire. Throughout the ride, there is non-stop action [okay maybe just two scenes of rest] but I was feeling the ache while playing! I think I wasn't very good at the game and frankly, not sure if I was doing it right. But there were a few moments when I did dodge for real because the 3-dimensional effect got me! Well done!

There was wind blowing up from the car where my hand was placed [like the blower we get at bowling alleys?] to give that extra 4-dimensional aftereffect. I could also feel heat when fire was thrown at me. My score wasn't impressive though *winks* I was alone on the carriage as Ice Ninja but hmm Fire Ninja earned 12,500 points too. Can I say I bagged away with 89,550 points? *haha* 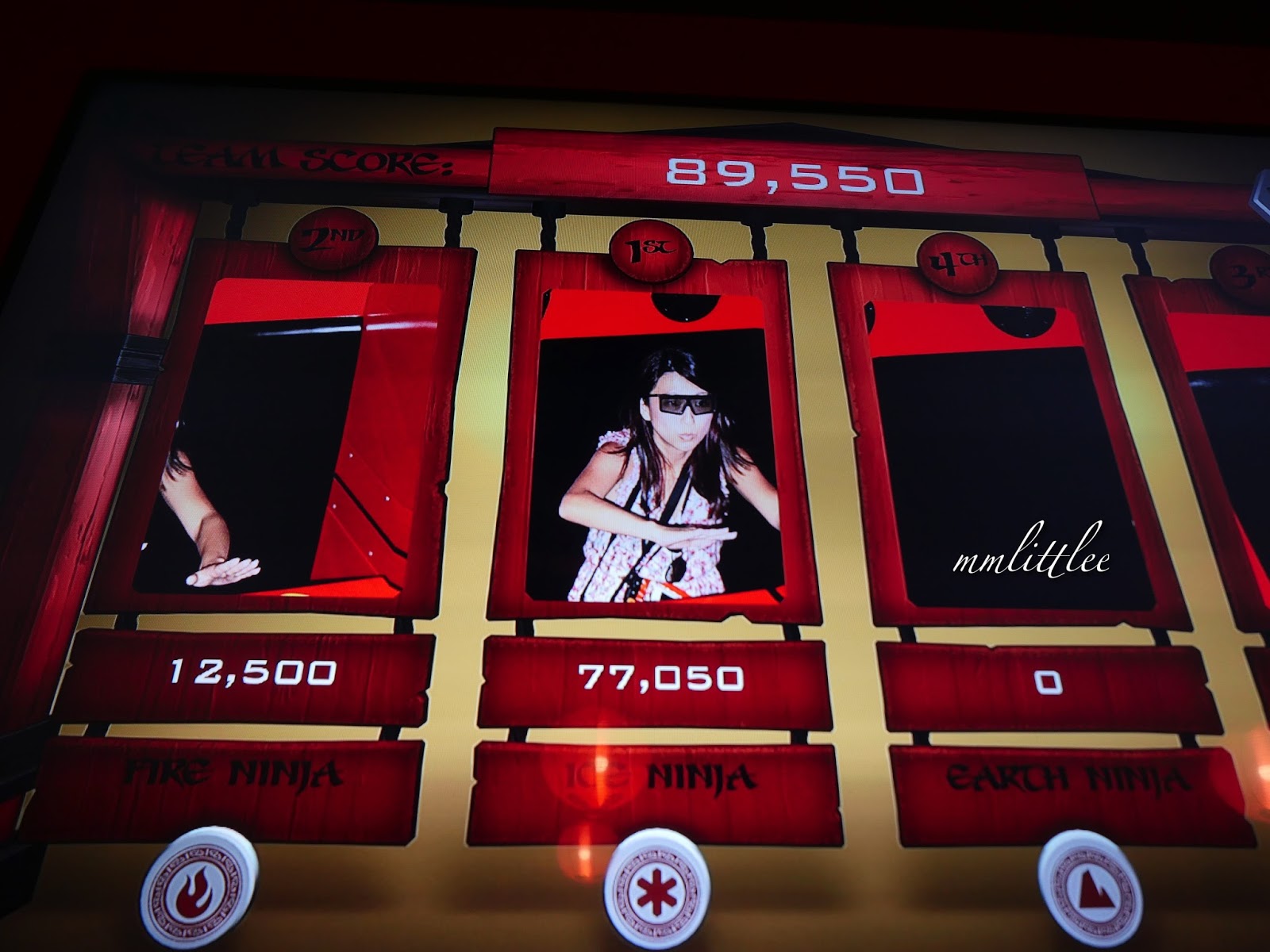 Besides the ride, there are four training areas to engage the family in:

Kai's Spinners: Guests can test their balance as they stand on one of Kai's spinning platforms and twirl:

Cole's Rock Climb: Grab a hold! Kids can test their agility as they scale a rock wall.

Nya's Practice: Master the water element with Nya in a 3D interactive game.

THE REALM OF SHADOWS
This Ninjago show is new to Legoland and it is staged at City Stage with four shows: 1100 hours, 1300 hours, 1500 hours and 1700 hours. It lasts 30 minutes and I say it was rather enjoyable! This show is run by humans controlling the ninja puppets with an extraordinary light show to boast. I was impressed with the light and sound technology which brought a lot of life to the show! I saw the children stayed through the 30-minute performance awe-inspiringly without fidgeting from their seat. Was it any way frightening? Maybe *nods* little ones may find the dark cave scene with bats spooky. Be sure to stay by their side and keep them assured!

Photography and videography are allowed in the show. Just make sure there is no flash involved to avoid disturbing the actors. At the end of the show, spectators were invited for a photography opportunity with Nya and Kai! Yahoo! The children were happy. 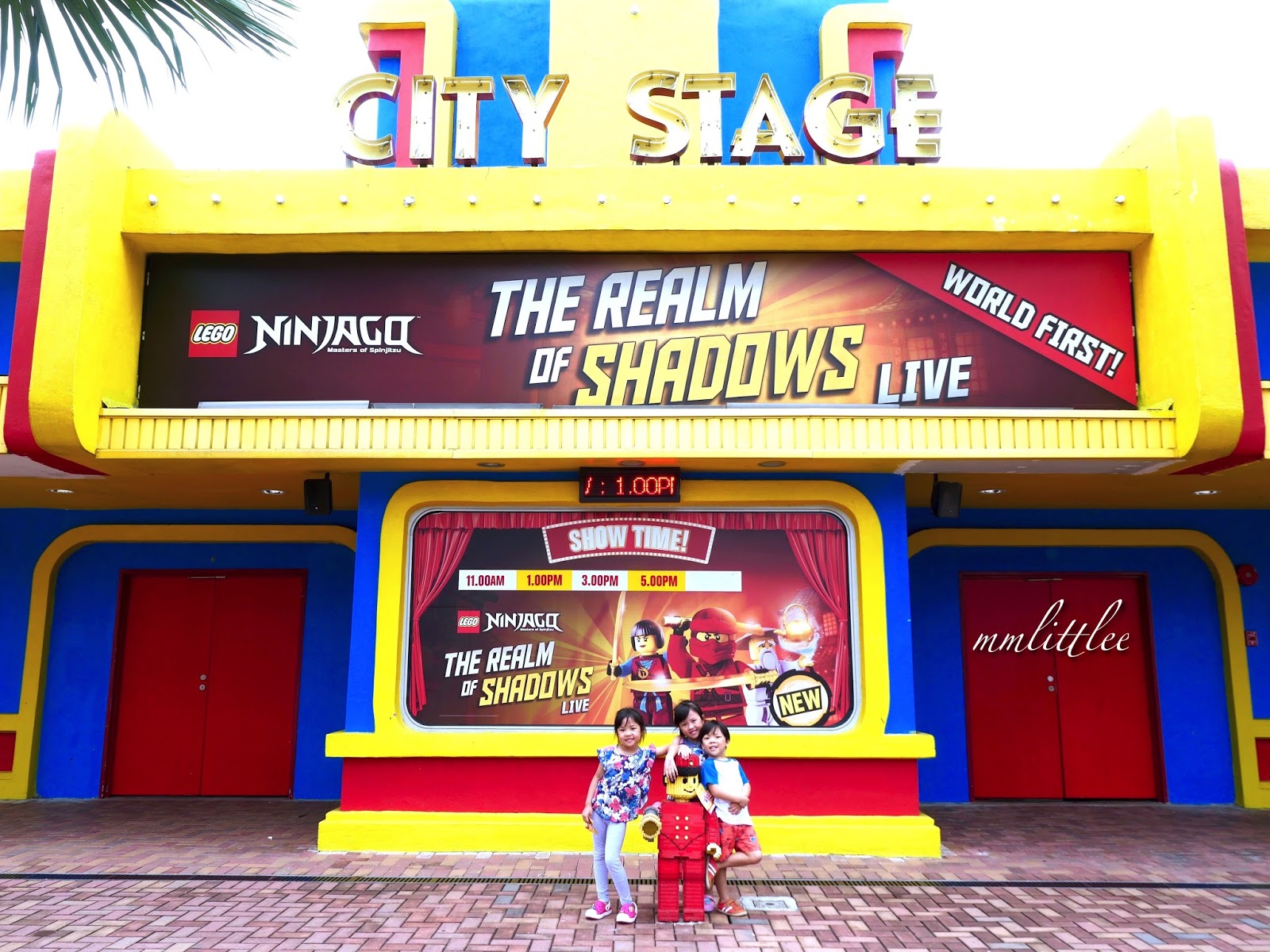 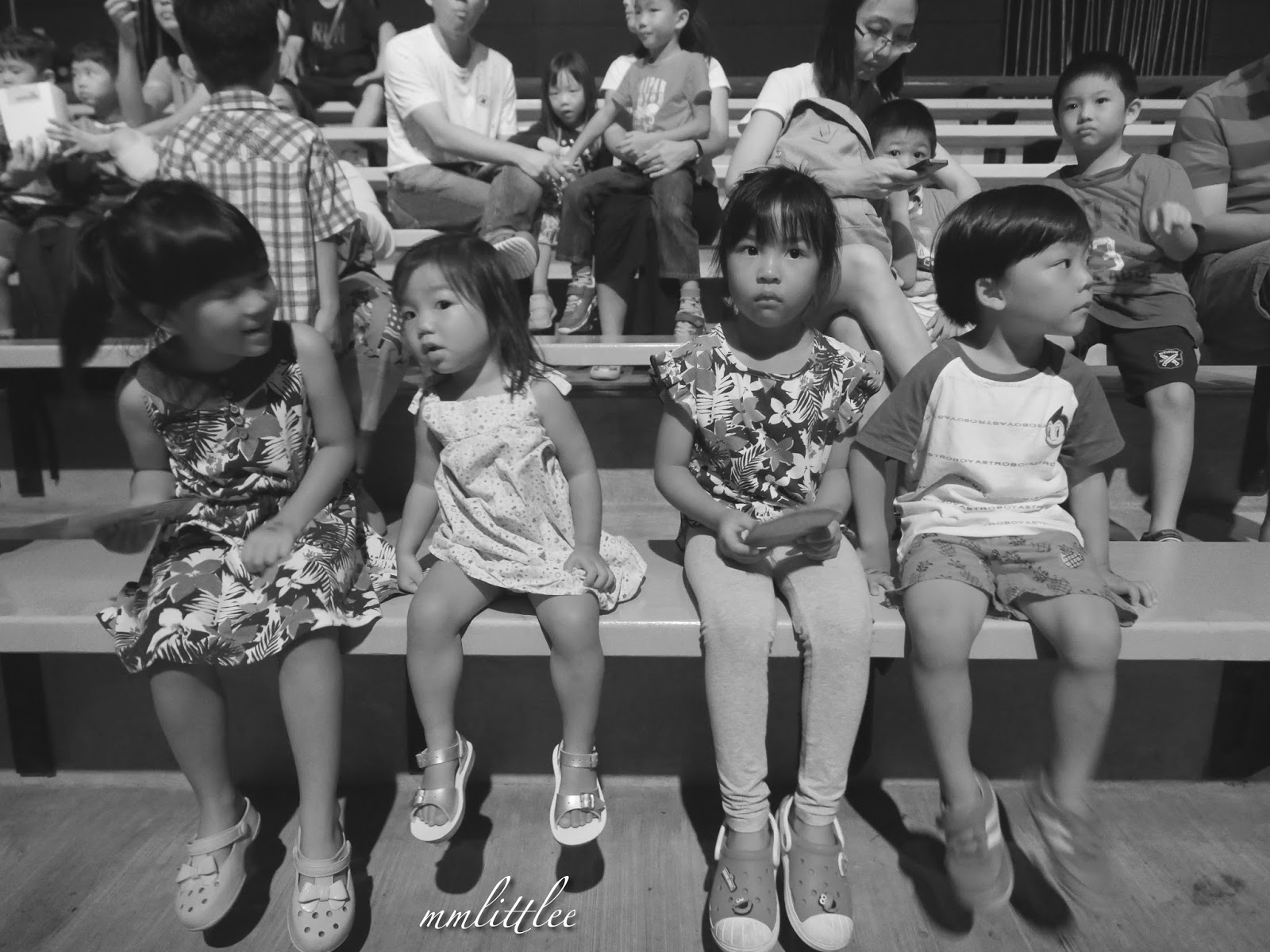 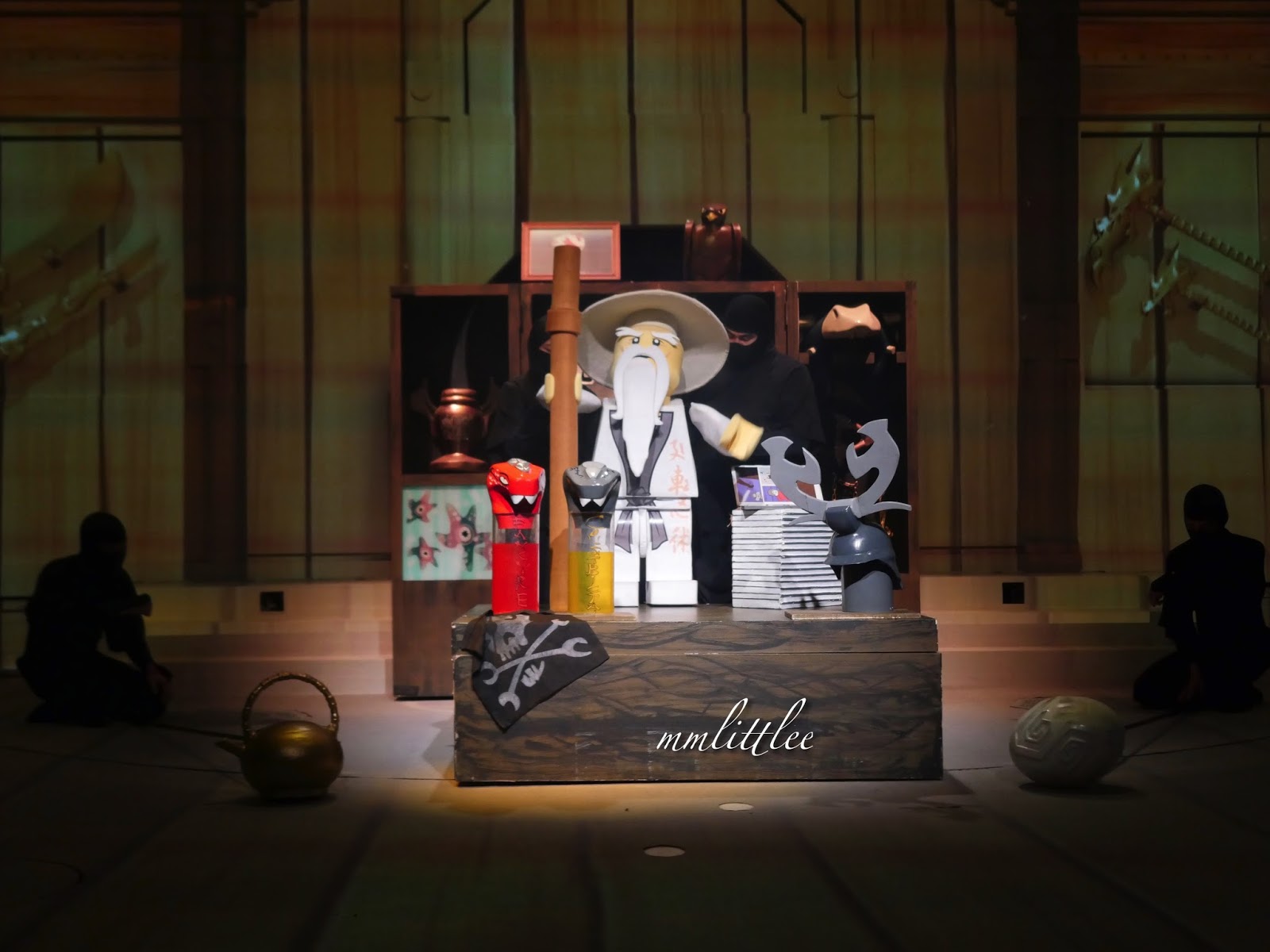 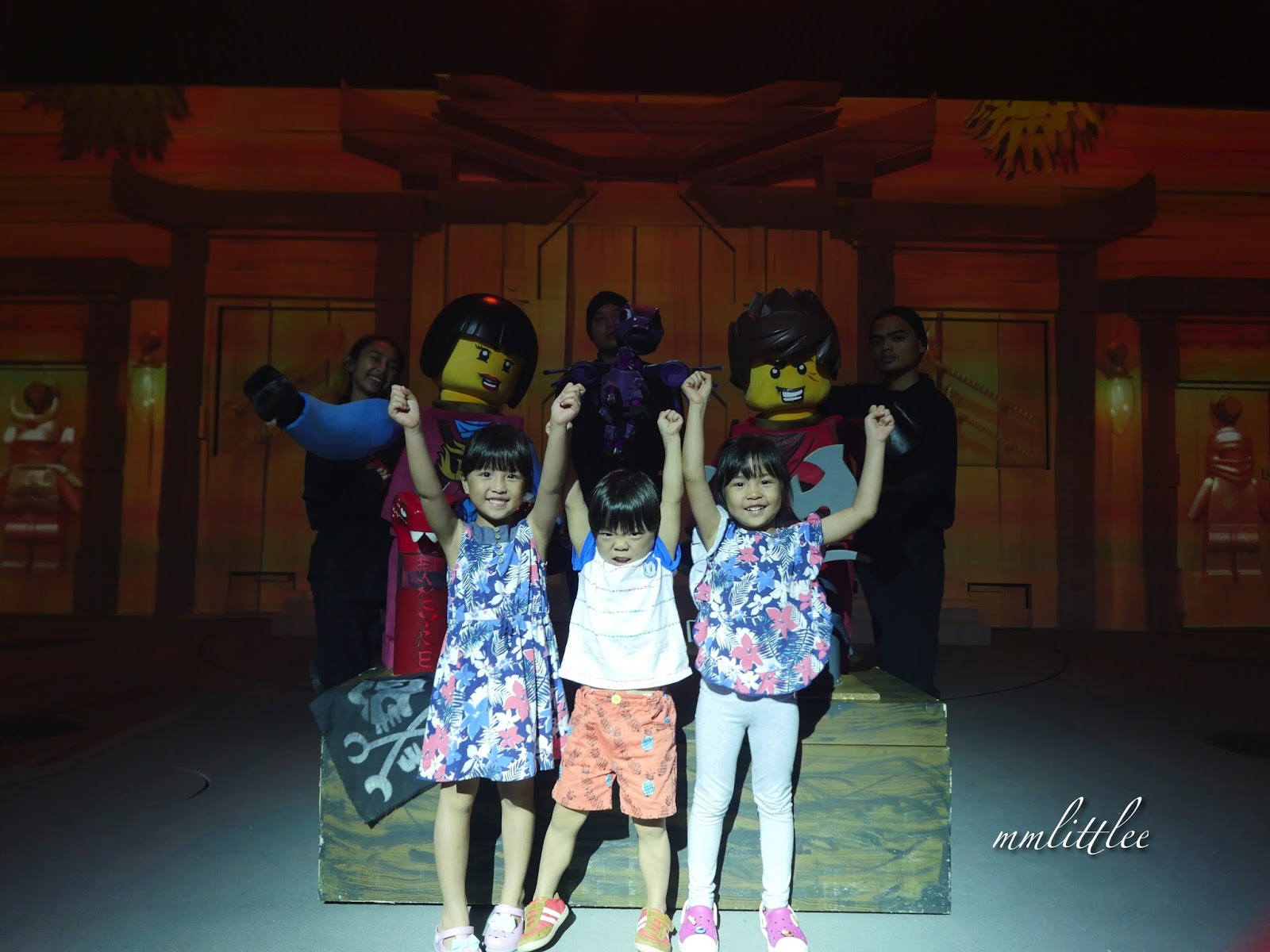 Our little Travel companions
October 2016 - Ewan at 4 years old and Faye at 2 years old
Click on our Travel tab to read all about our travel tips and tricks
including our write-up on:

Ewan's Ninjago Costume is rented from My Mini Me a S$25.


A stay at home mum, blogging to widen her social life.
We want to echo the sound of love through our lives to inspire other mothers alike.
Email Post
Labels: 2yo 4yo Ewan family Faye legoland Ninjago review solo-parenting