On our mum-and-kiddo trip to Taipei, I chose to fly with EVA Air because the fare was half of what Singapore Air had quoted. Price Prevails, I'm a Practical Mom! Now since we are able to choose our flight timings, I made sure we had one flight booked on the Hello Kitty jet. I am not a kitty fan but I didn't want to miss the hype. Furthermore, I get to write about our thematic airplane experience! 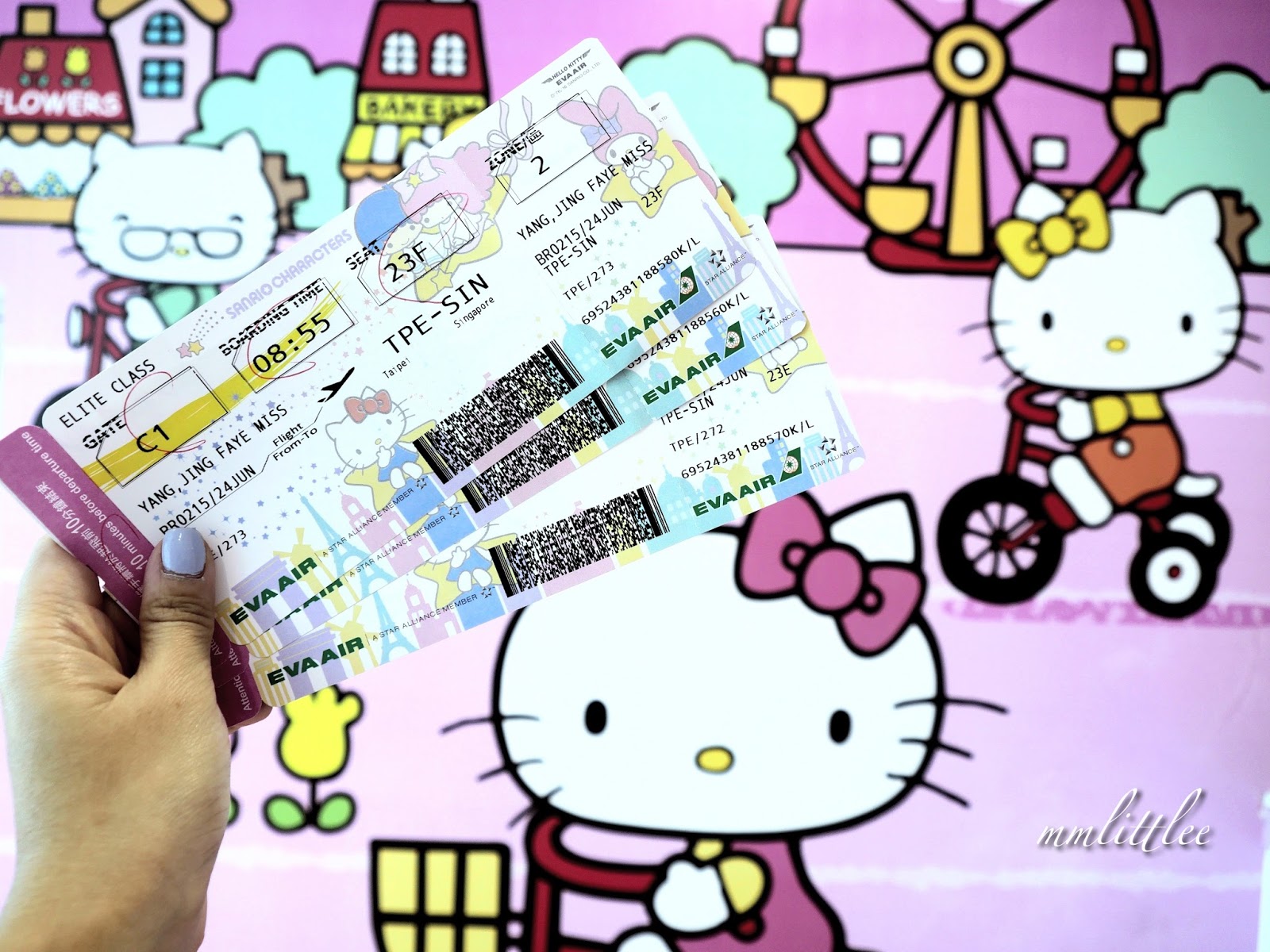 2. There are seven jets in total but the only one that flies between Singapore and Taipei is the Hello Kitty Shining Star featuring Little Twin Stars, My Melody and Hello Kitty.

3. Hello Kitty jets depart from Singapore on BR216 on Wednesdays, Fridays and Sundays only.

4. Hello Kitty jets depart from Taipei on BR215 on Wednesdays, Fridays and Sundays only.

5. The flight times are not the best so you are really flying it because you are a big fan, you need to get home by the lunch hour or well, the rest of the flights are fully booked.

6. Upon reservation, ensure that the flight number is booked correctly on the correct days of departure because the booking form does not specifically indicate "Hello Kitty Jet" which I hoped they would. I had to cross-check everything before confirming my booking lest we got disappointed.


TAOYUAN HELLO KITTY GATE
There is a Hello Kitty themed terminal gate at Taoyuan International Airport and it welcomes everyone in the departure terminal even if they weren't taking a Hello Kitty flight out of Taipei. It is  situated at Gate C3 in Terminal 2.

However, that doesn't mean you will be flying off via Gate C3 even if you were booked on a Hello Kitty flight! We spent some time playing at Gate C3 before making our way to Gate C1 where our Hello Kitty Shining Star waited for us.

The Hello Kitty terminal gate has a retail shop for kitty fans, seats for waiting passengers, a mini rainbow-carpeted amphitheatre showcasing Hello Kitty cartoon, a playground and another large play area with an empty toy box. It would have been a great place to play in if only the toy box was kept filled. I believe they could have been stolen because I found some remnants of Hello Kitty building blocks in the corner and they did look like a cute bunch for the home collection. 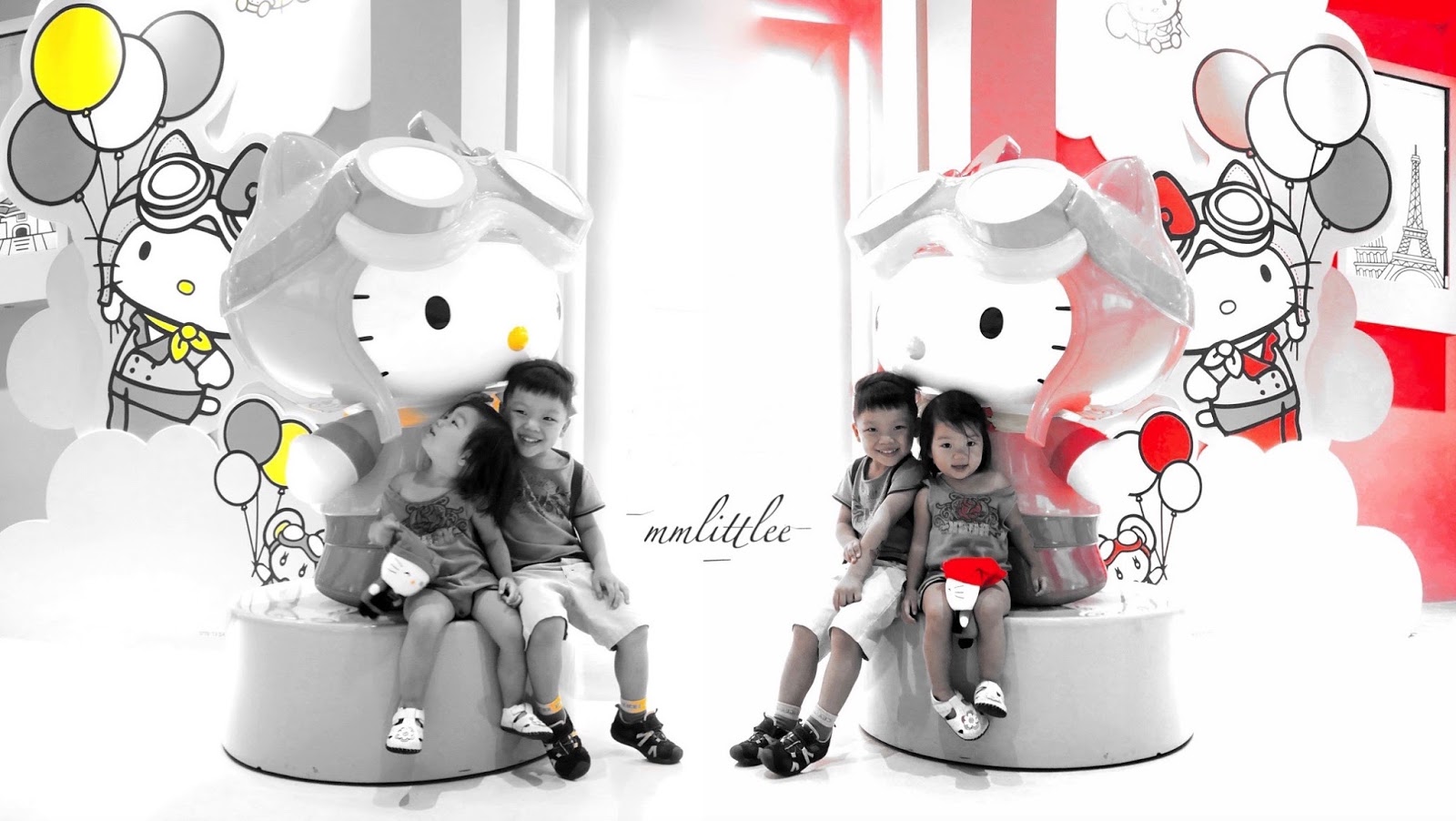 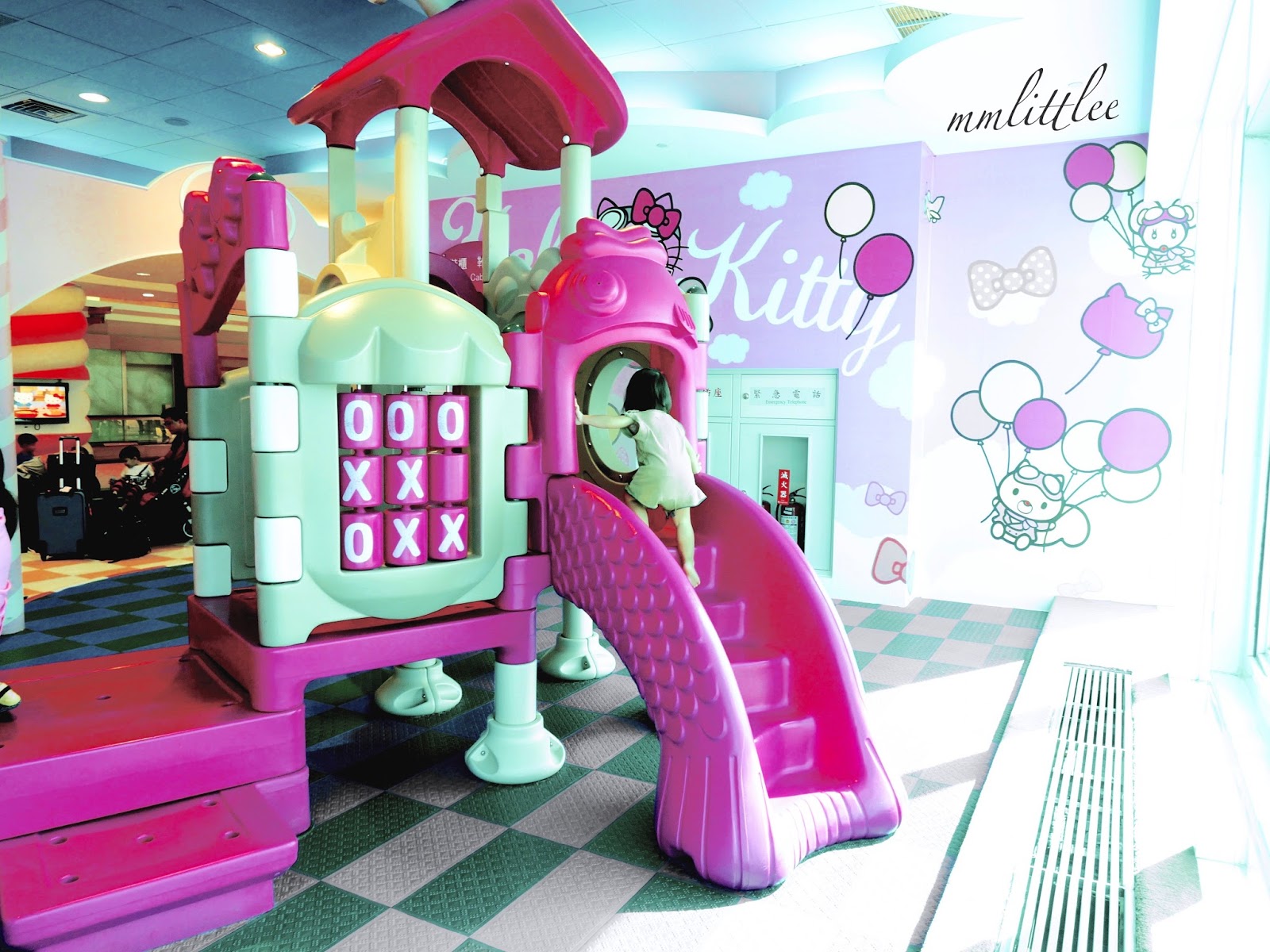 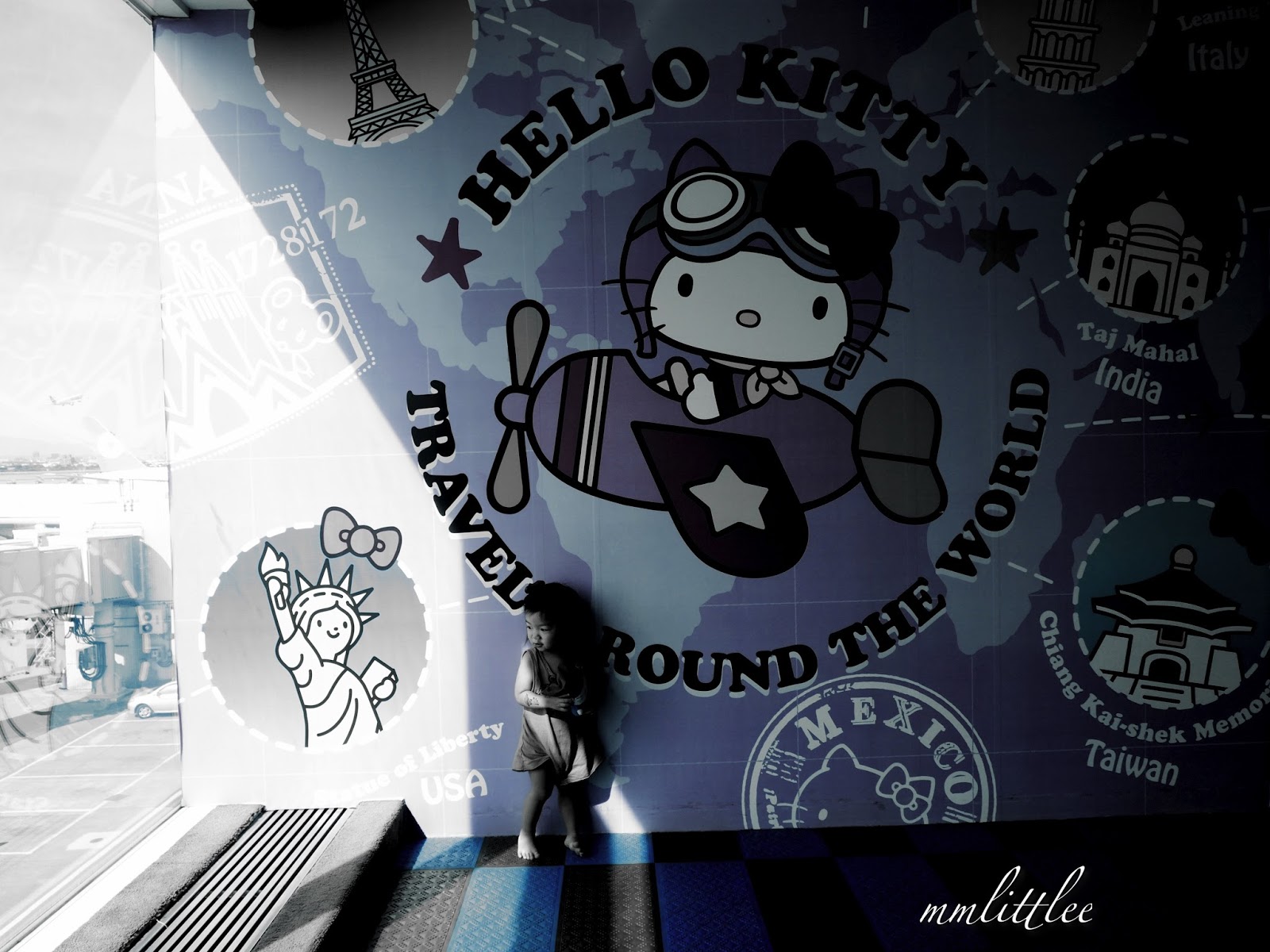 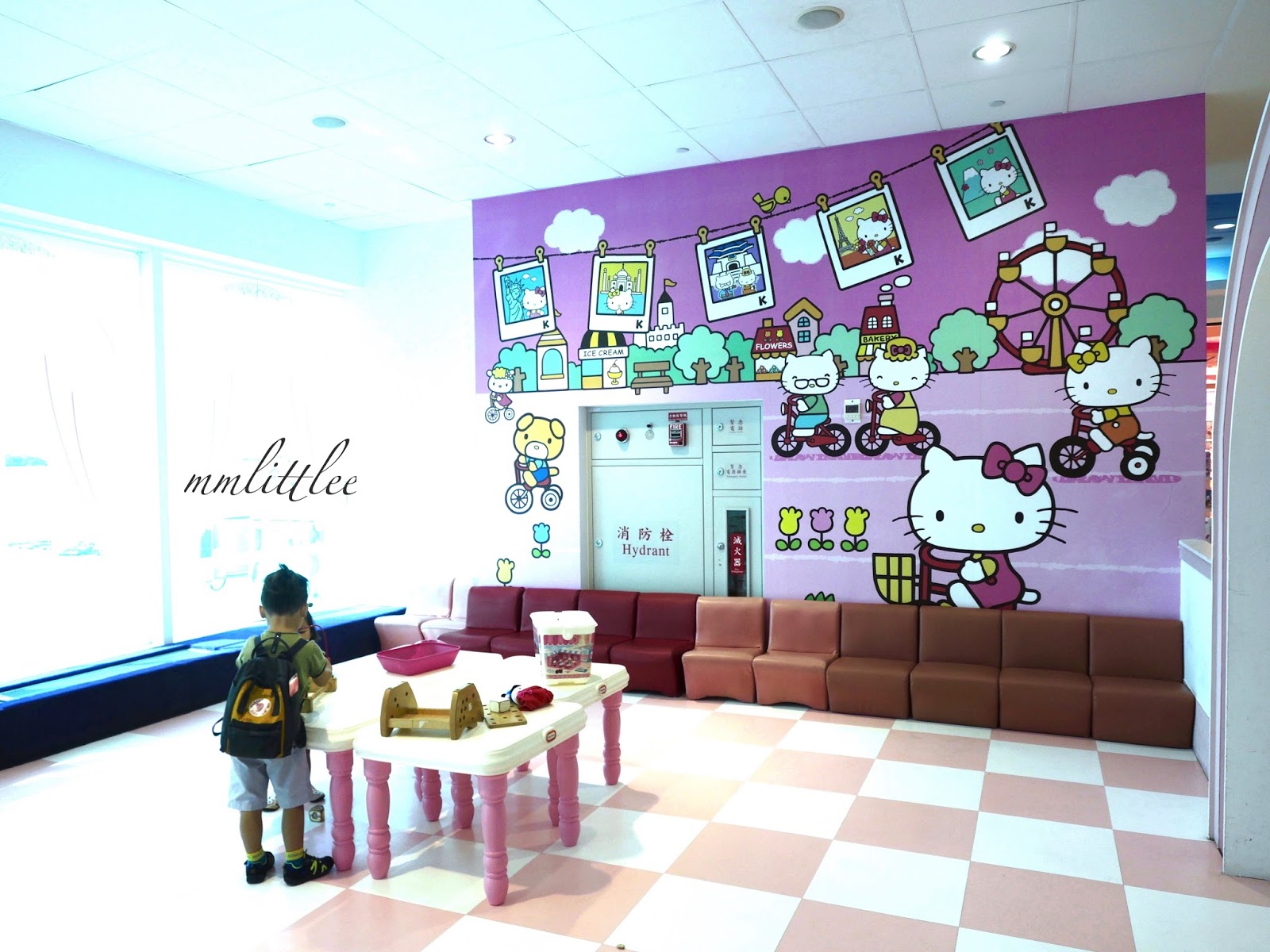 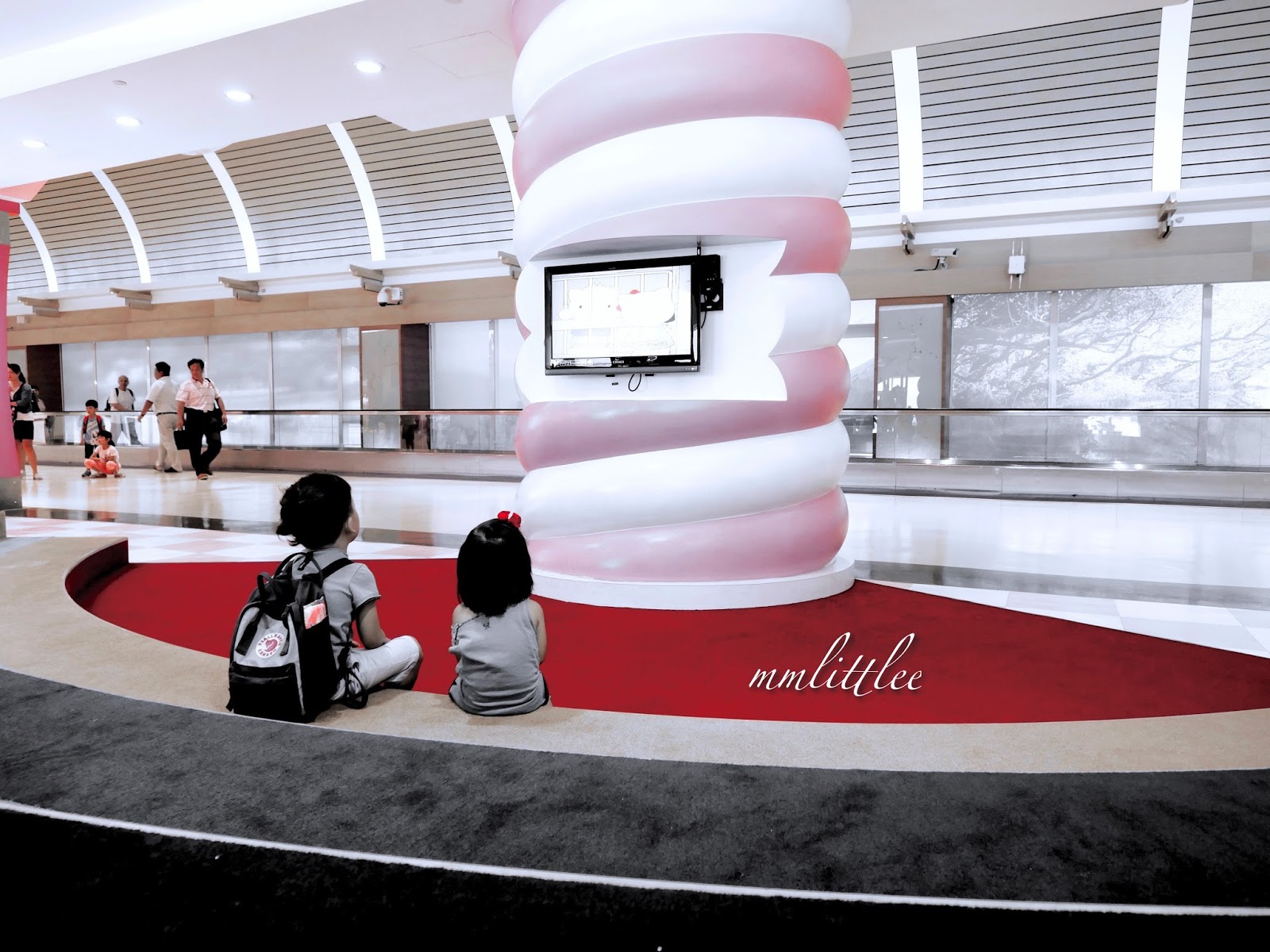 We didn't stay there for long because our dear girl had to poop. Oh where is that Hello Kitty Diaper Room I saw earlier! No No.. it isn't at Gate C3 where everything Hello Kitty is placed! I backtracked our footsteps and even after 100-metres, I still couldn't find it! It was not a dream! We did pass by a Hello Kitty Diaper Room and so we walked and walked, took a right-turn and finally found it.

It is kept really clean with padded diaper changing tables, baby moisturiser, bottle cleaning detergents, hot water dispenser, tissue warmer [whatever that is] and free diapers! Oh yes! Just in case you ran out of diapers, there is a cabinet stocked with S, M, L and XL diapers for your baby! Well, I was hoping there were Hello Kitty printed on it but no. I have to say this, "Please do not abuse the system. Take only what you need."

There is also a nursing room and surprisingly a baby cot in the corner. I thought that was quite unusual because I wouldn't want my baby to sleep in there while breathing in whiffs of poop when other moms come in to make a change? Well, anyways, thoughtfulness for some babies who need a rest and some moms who do not mind. 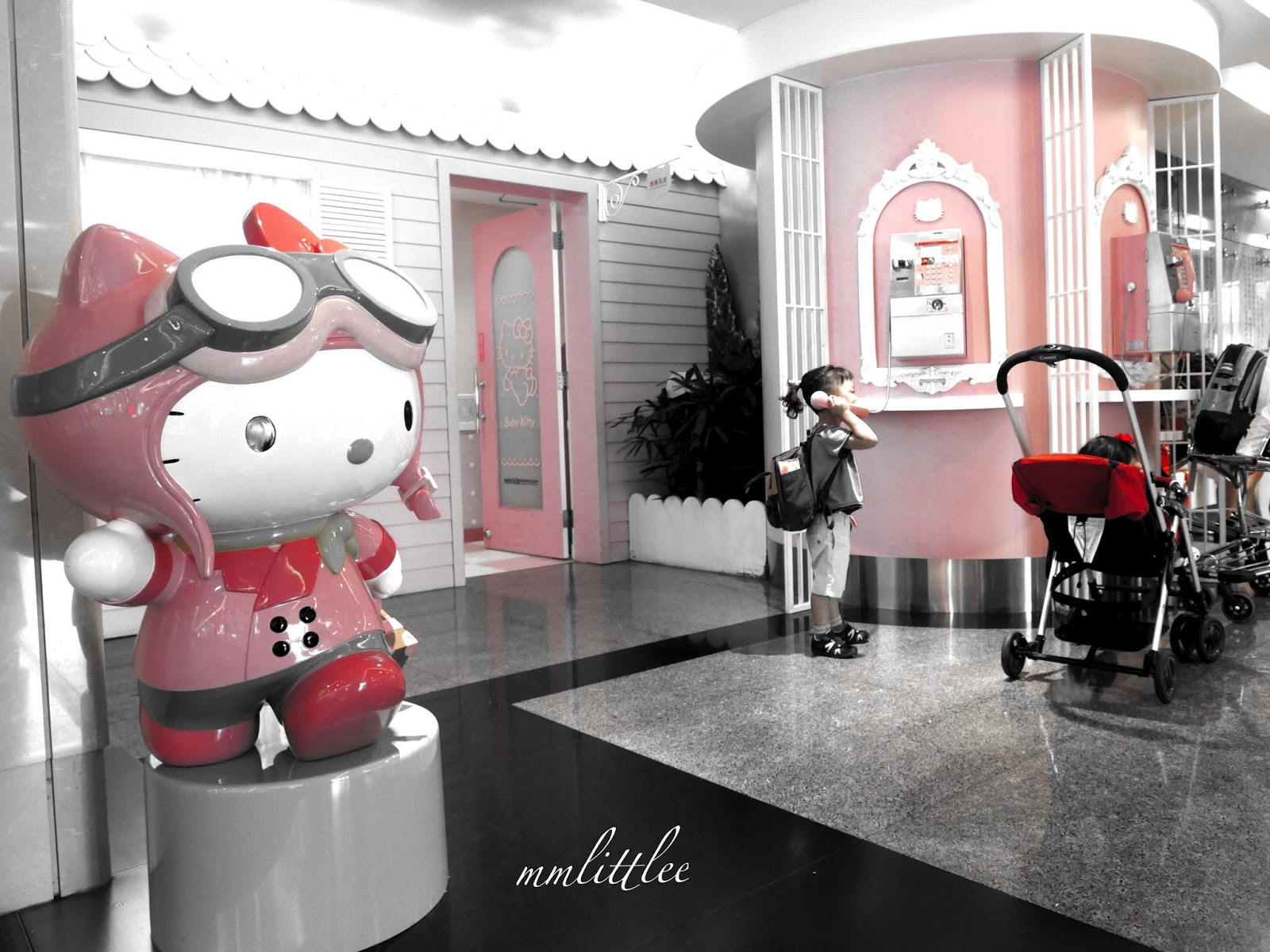 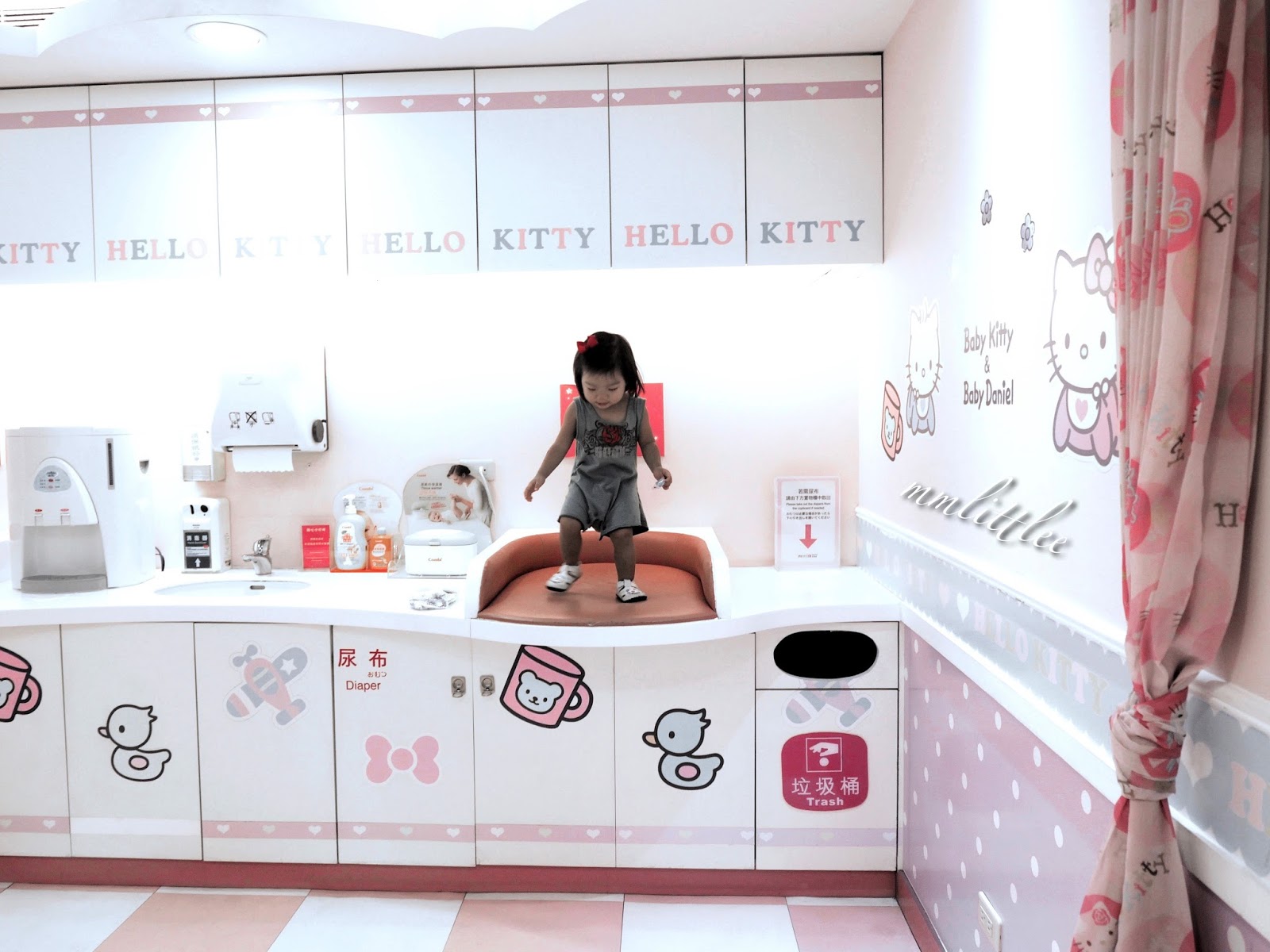 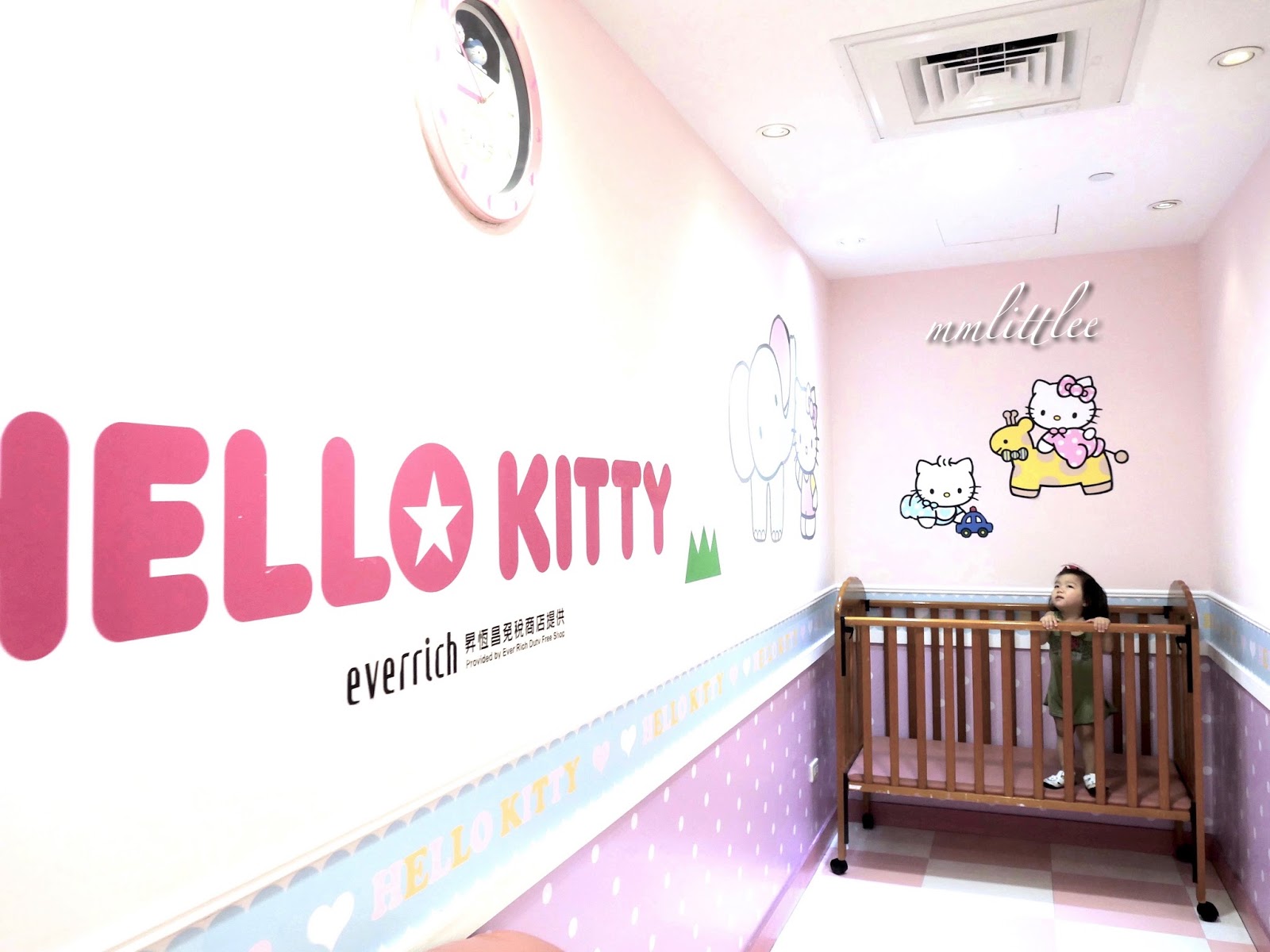 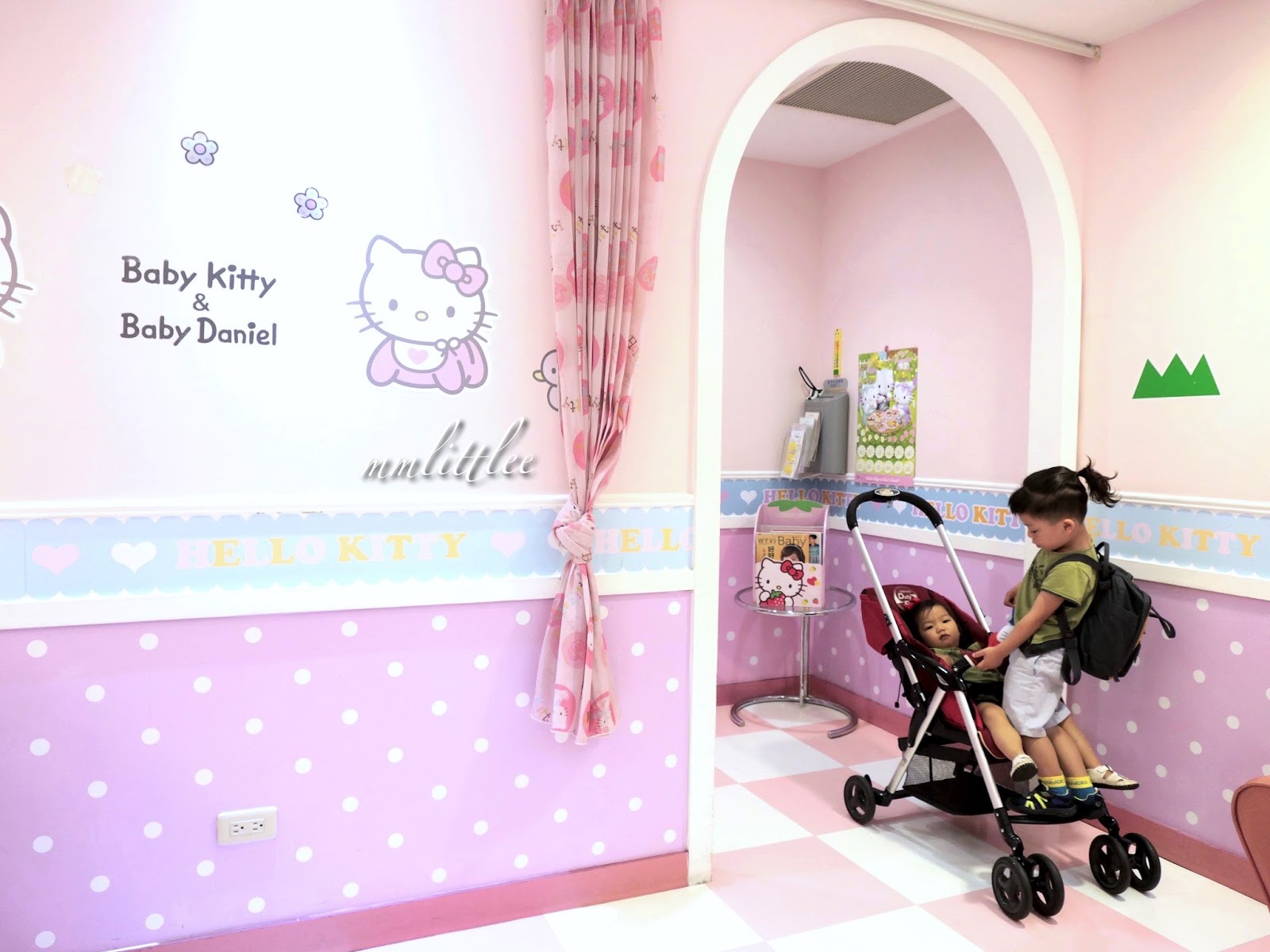 Ah so you noticed our stroller? If you need one, head to the information counter to have one borrowed. No payment is needed but you will bee required to present your boarding pass for registration. Simply leave it at the entrance of any gate you will be flying off from. It was very useful for us especially when we had to rush to C1 for boarding after changing Faye's soiled diapers [and spending too much time photographing the Hello Kitty Diaper Room]. 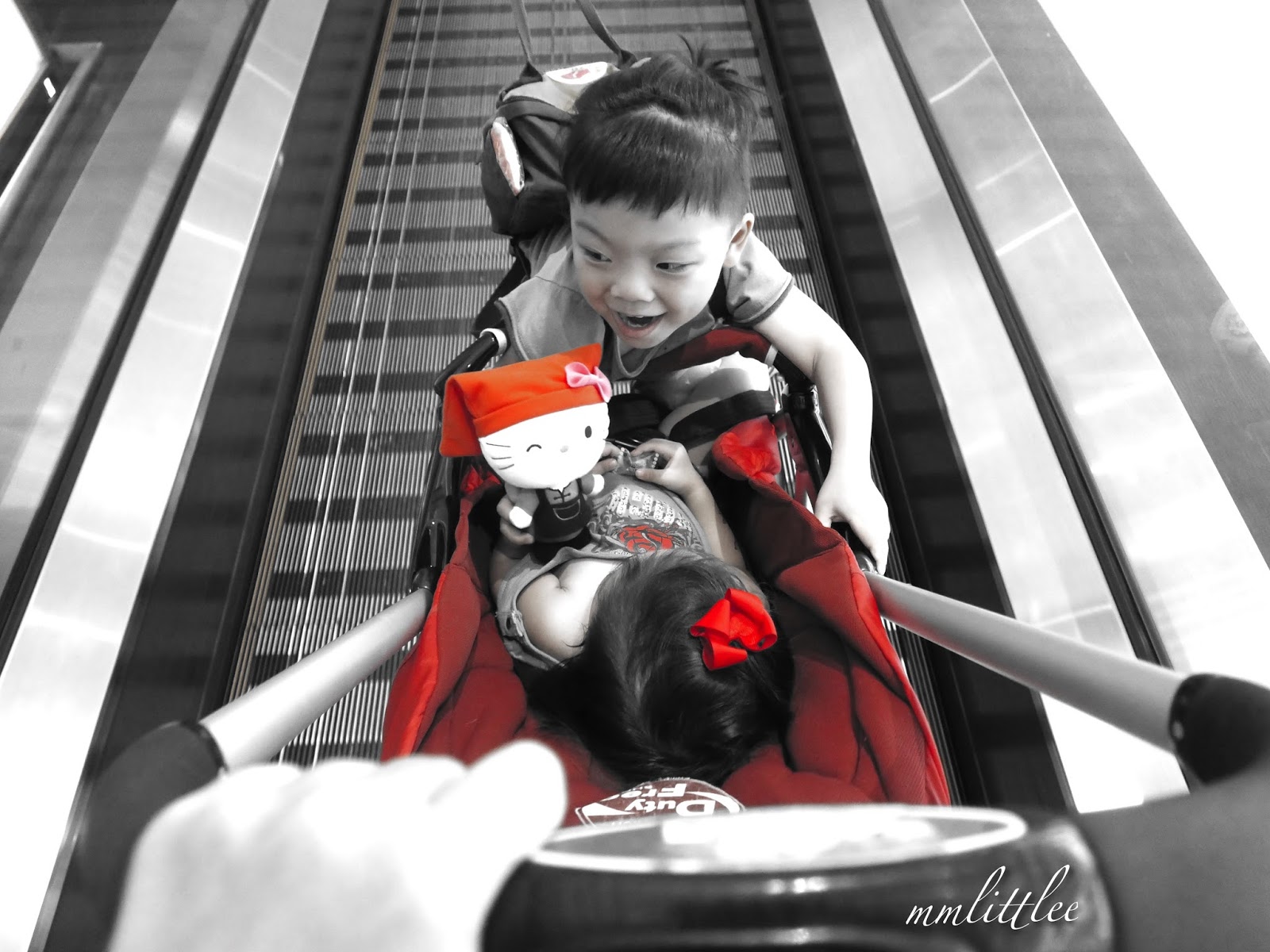 HELLO KITTY SHINING STAR
We were really excited when we saw the plane! Took a couple of shots and we quickly made our way through the aerobridge. I was expecting the plane to be overladed with Kitty cuteness. Emblems, accessories and what-have-yous only to find one miserable Hello Kitty pillow on our seat. 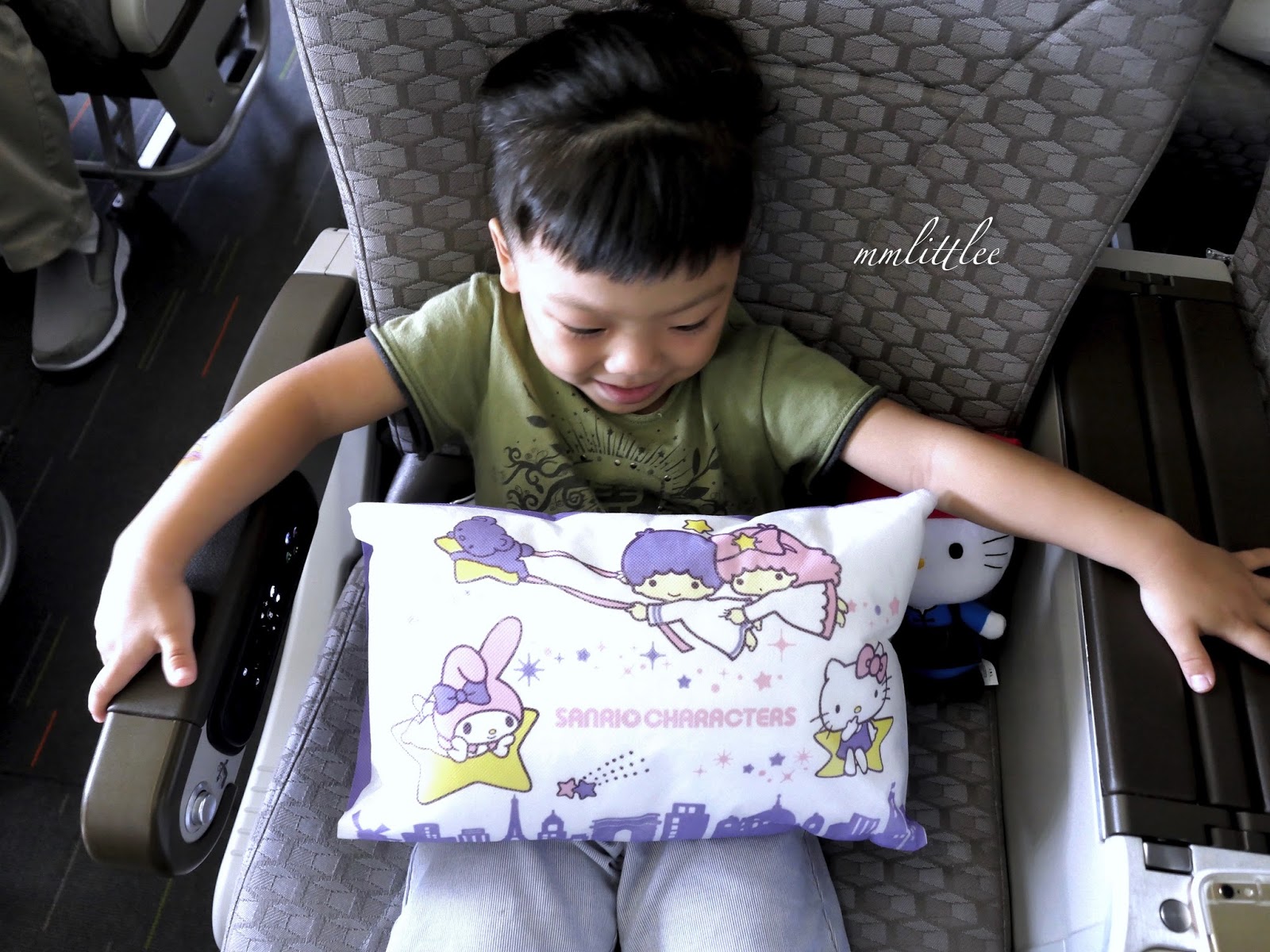 Where is the Hello Kitty disposable head rest sheet? Why aren't there Hello Kitty logos embossed on the seats? Why is the blanket the regular grey EVA Air blanket? Why aren't the toys given to children Kitty-themed? We were given a Frozen colouring book and a Hello Kitty Poker Card Set. Really? You are giving away poker cards to children? I felt let down. A small Kitty plush would have been nicer than a Disney gift of any kind. We are after all on a Sanrio flight.

I didn't quite like it that the arm rests could not be raised between the kids and I. When I did a brief walkabout down the aisle, I realised we were put into a different class from the Economy-goers. In cabin right up ahead was the Business Class, that I could tell because passengers had their own booths. Behind us was the Economy class [which we sat from SIN to TPE]. We were in this middle class cabin with more leg room and wider seats [I believe that was the Elite Class]. My only gripe was I couldn't raise the arm rests [unlike the Economy class] to let Ewan and Faye nap lying down. While Faye could still fit into the size of one Elite seat, Ewan couldn't and he slept in a distorted position which looked quite uncomfortable. My poor boy.

To be fair about the Hello Kitty disposable head rest sheets. I saw the Economy class seats had them but not ours. 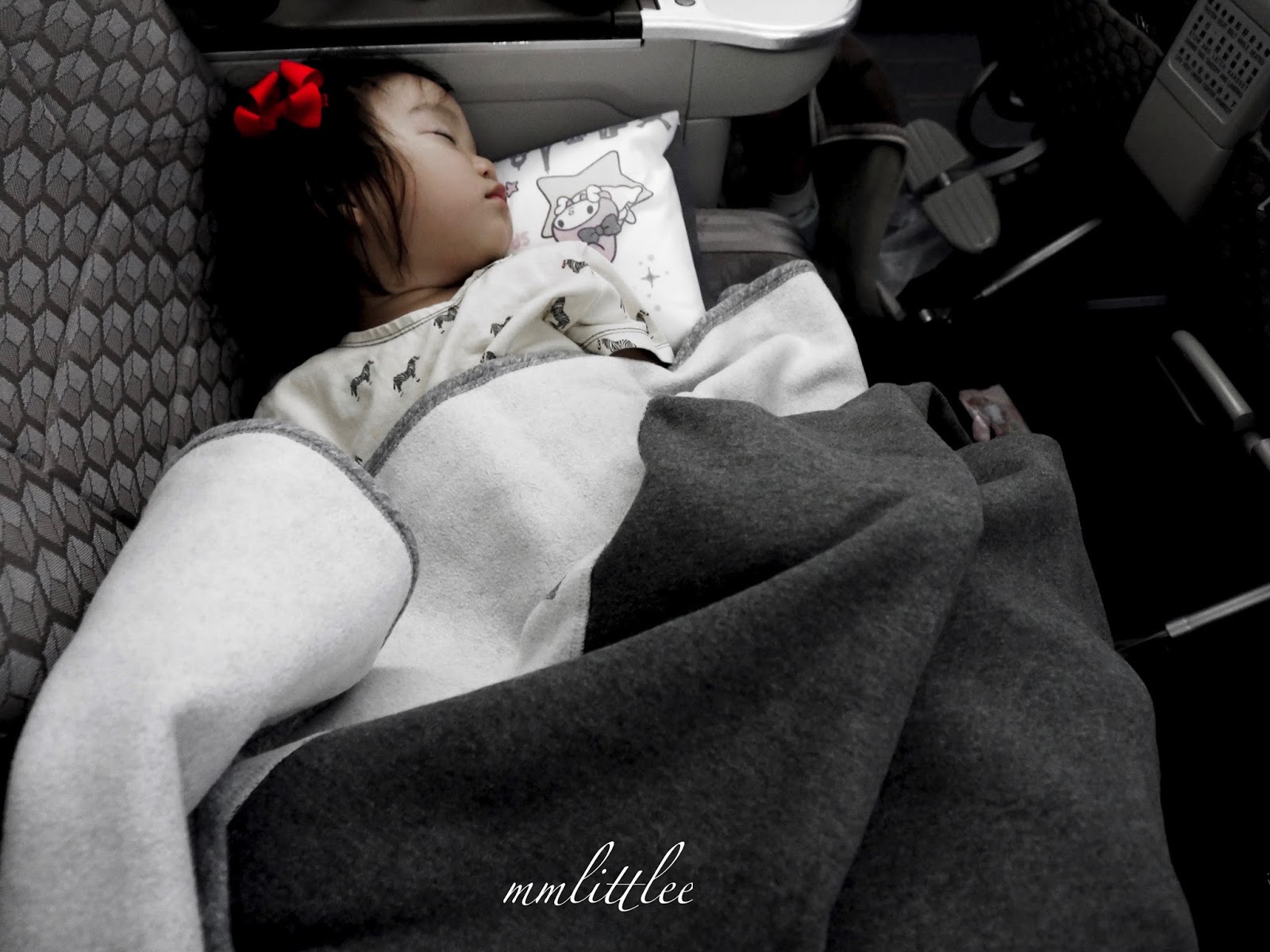 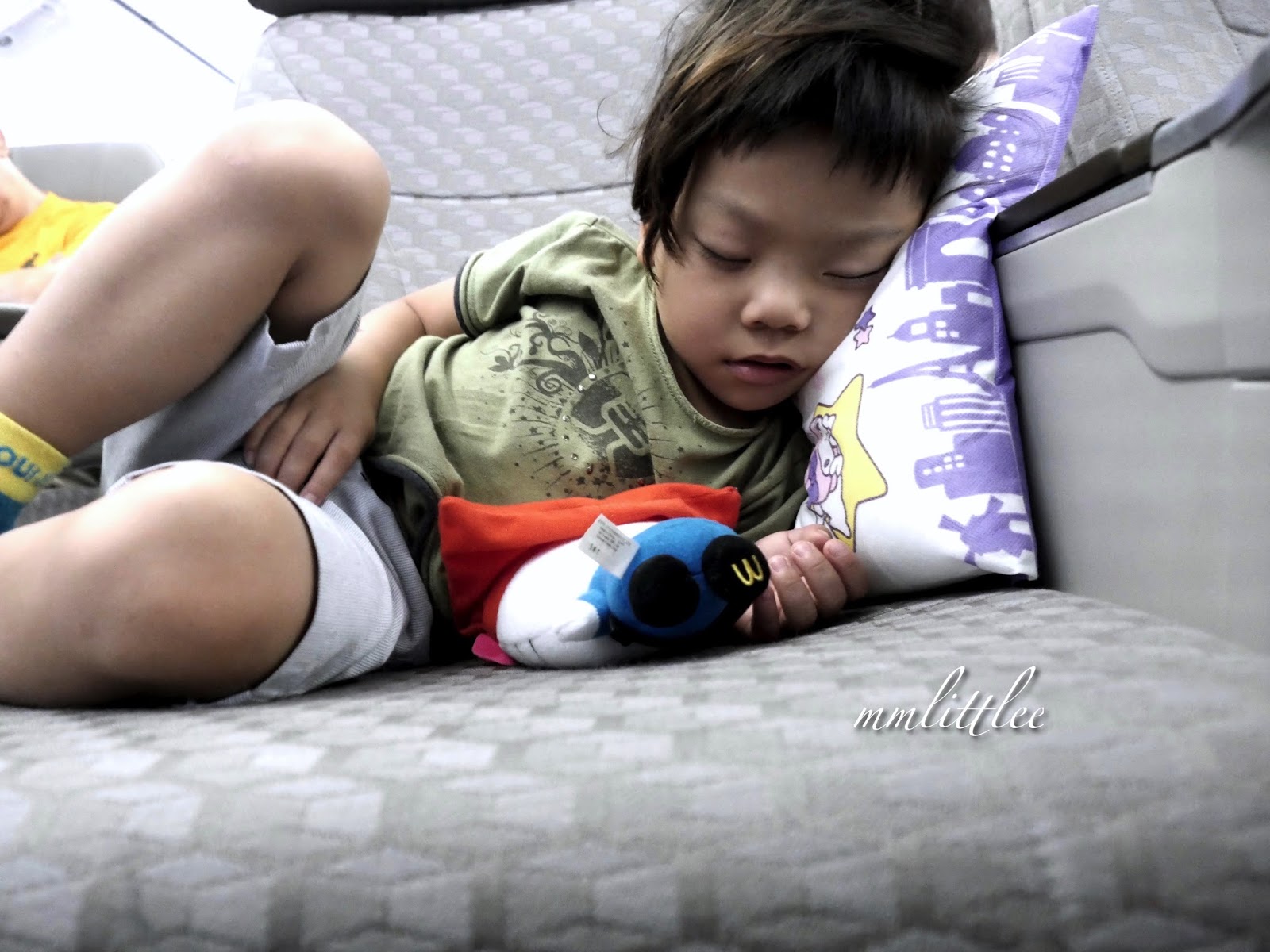 I had to check the lavatories out. So I took the excuse to bring Faye to the lavatory even though I was going there just to take pictures. I am satisfied with what they have in there. At least the toiletries were all Kitty-themed. Though I though they could splash more Hello Kitty and friends in there like mmmmm Kitty wallpaper? *grins* Remember, I am not a Hello Kitty fan. I just think that if a theme is to be made out of a cafe or airplane, it has got to go overboard! 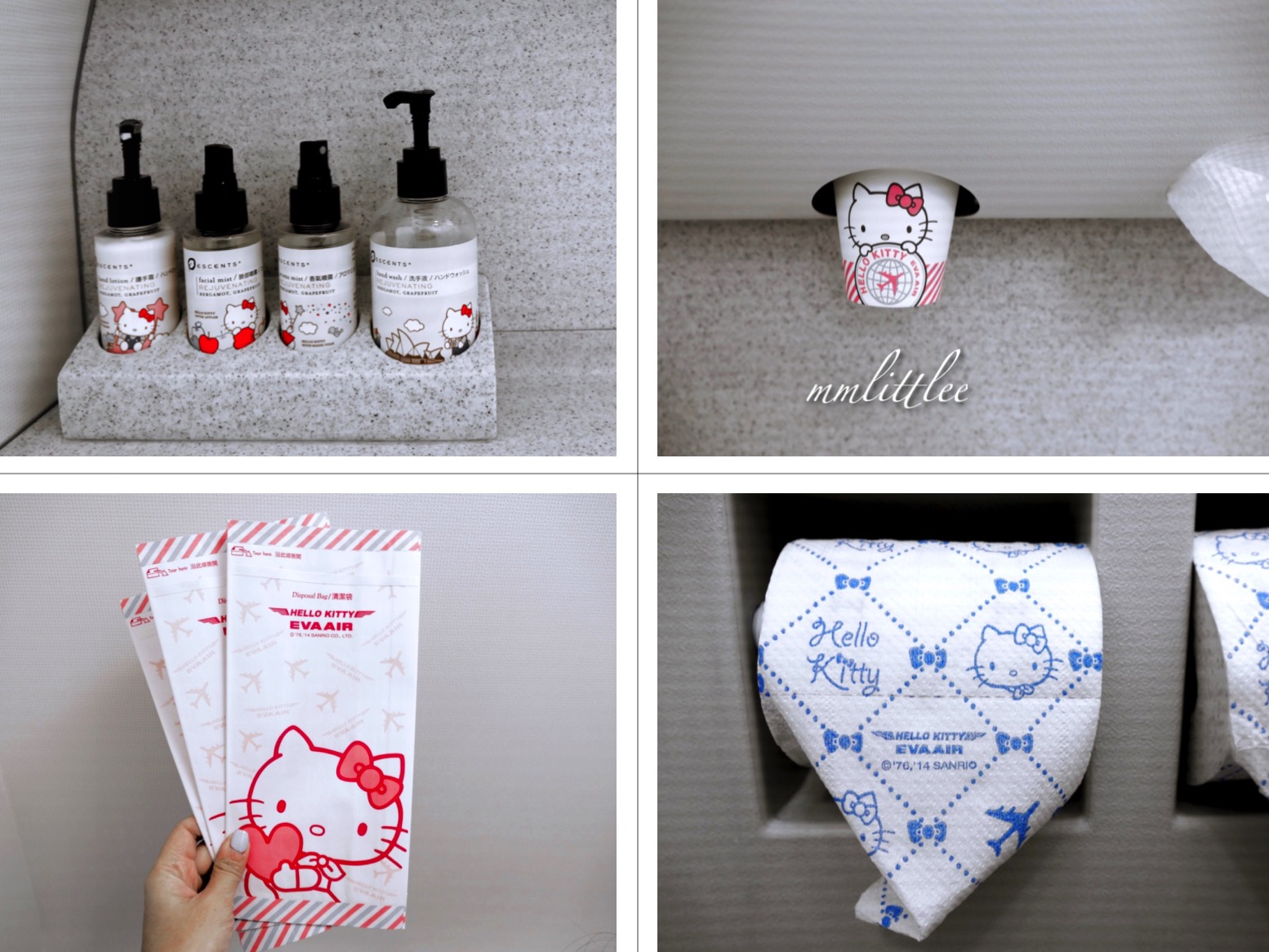 MEALS ON BOARD
The packets of assorted nuts were given out to us shortly after departure and Yay! It came with Hello Kitty printed on it! While I worked my way to opening the packet, I was half-hoping they would impress me with Kitty-shaped nuts. Alas! They were just regular assorted nuts housed in a prettier packaging. Am I asking for too much? We did pay close to a thousand bux per head to experience a thematic flight! *hahah* But hey.. there are Hello Kitty biscuits manufactured in the market already. They can easily use those as snacks on board the flight.

Now the children's meals are something to look at! I liked those Little Twin Stars utensils and mango pudding made out of a Hello Kitty head. It was delicious by the way! The quality of food must be pretty decent since the children finished most of what was presented to them. They were plated in a disposable plastic tray which sat nicely onto a cardboard Kitty holder. I thought they presented the meals pretty well! I read that partial flights will not be serving meal boxes for child meals due to aircraft limitations from 1st of June 2016. So we were lucky we got a taste of it on our flight back to Singapore. 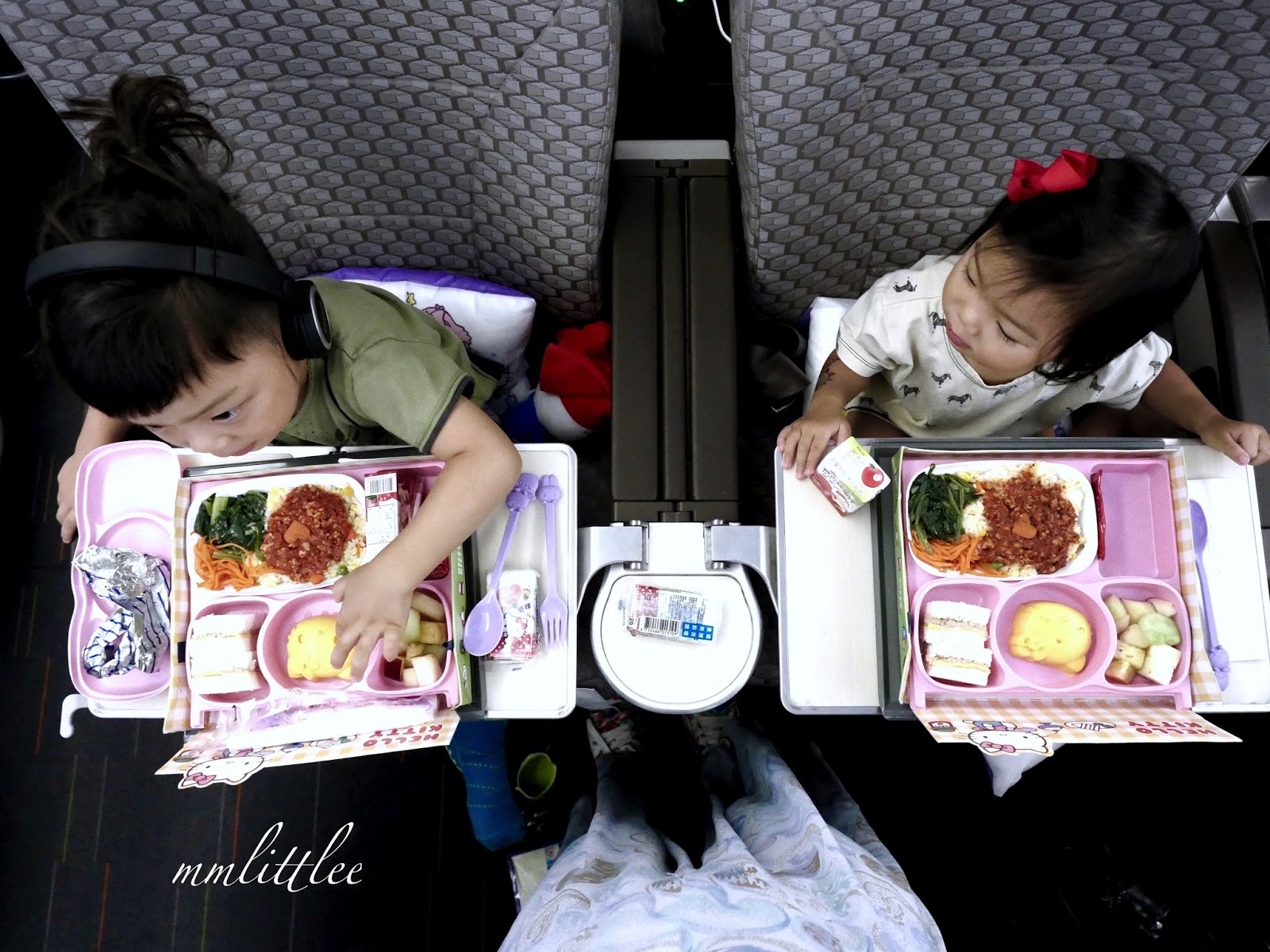 I was so busy with the kids [Faye spilled water all over herself] that I gobbled my lunch as fast as I could. No time to photograph the adult's meal but it must had been rather ordinary for me to not remember a thing about how it looked.

Now the verdict. Is the Hello Kitty jet worth the experience? It was a No for me as soon as we disembarked. Yet now, from the pictures I edited, it does look rather cute doesn't it? I am leaving this open-ended. Take my word for it that there should be more Kitties involved on board the plane and then decide with the pictures I shared.

Ah do not forget that not all flights will cater to meal boxes for child meals due to aircraft limitations from 1st of June 2016! Cross your fingers if you want that for the kiddo. 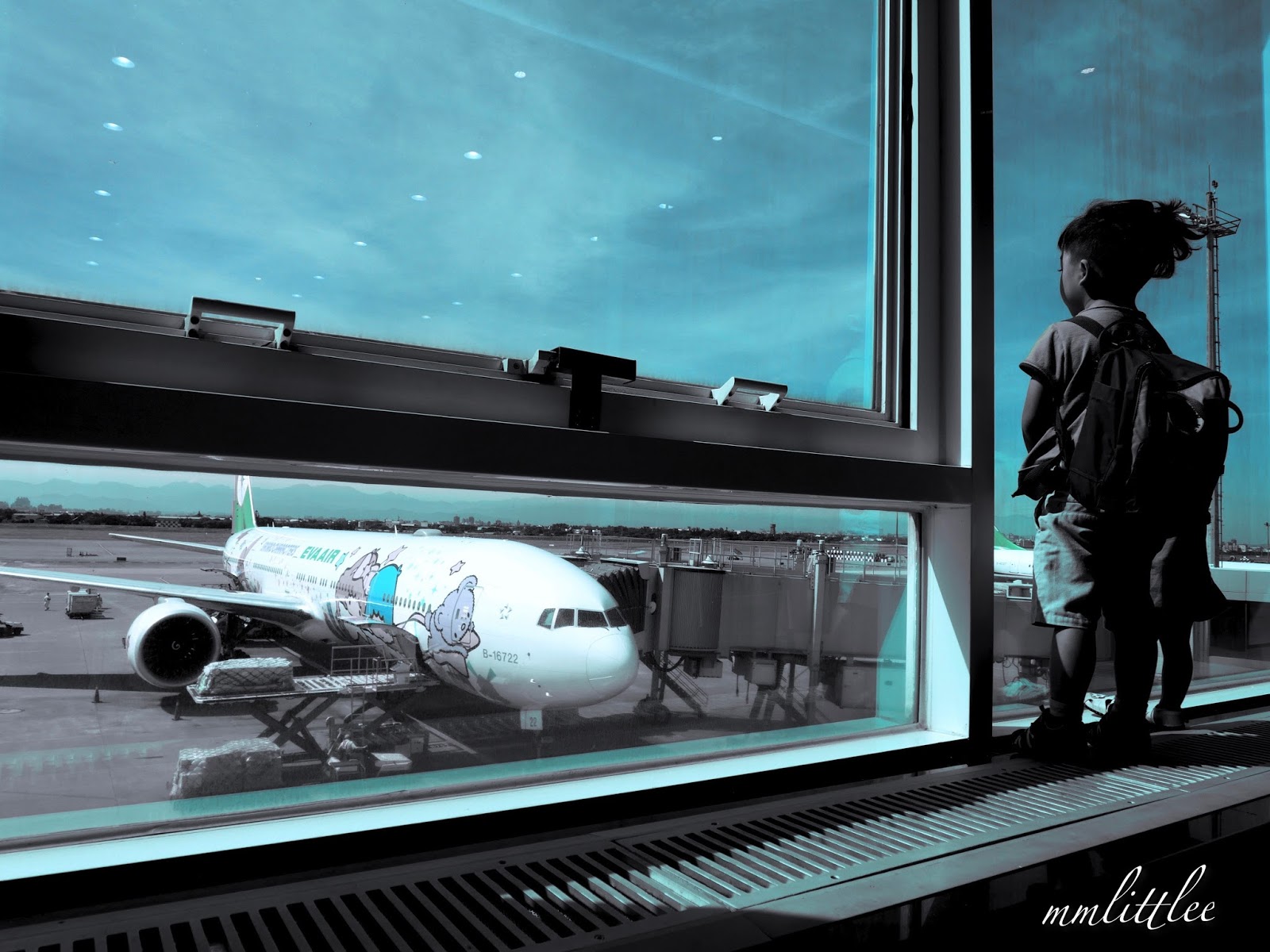 Our little Travel companions
June 2016 - Ewan at 4 years old and Faye at 2 years old
Click on our Travel tab to read all about our travel tips and tricks
including our Taipei for Kids post, Leofoo Resort and Leofoo Village Theme Park! 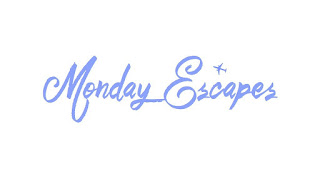 A stay at home mum, blogging to widen her social life.
We want to echo the sound of love through our lives to inspire other mothers alike.
Email Post
Labels: 2yo 4yo airport EVA Air Ewan Faye food Hello Kitty holidays solo-parenting Taiwan