Leofoo Resort provides a shuttle service to Leofoo Village Theme Park any time of the day. There is no time schedule to follow. Simply request for a vehicle to the theme park and you will be transported there in two minutes flat. It is the first fantasy world that combines an amusement park and Safari!

With two children four years old and under, it is advisable to bring along a stroller. Well, we did not have one on hand but the Visitor Center at the theme park has a rental option which we took at S$2 [To be fair, there is also a S$20 deposit]. It was a life-saver. 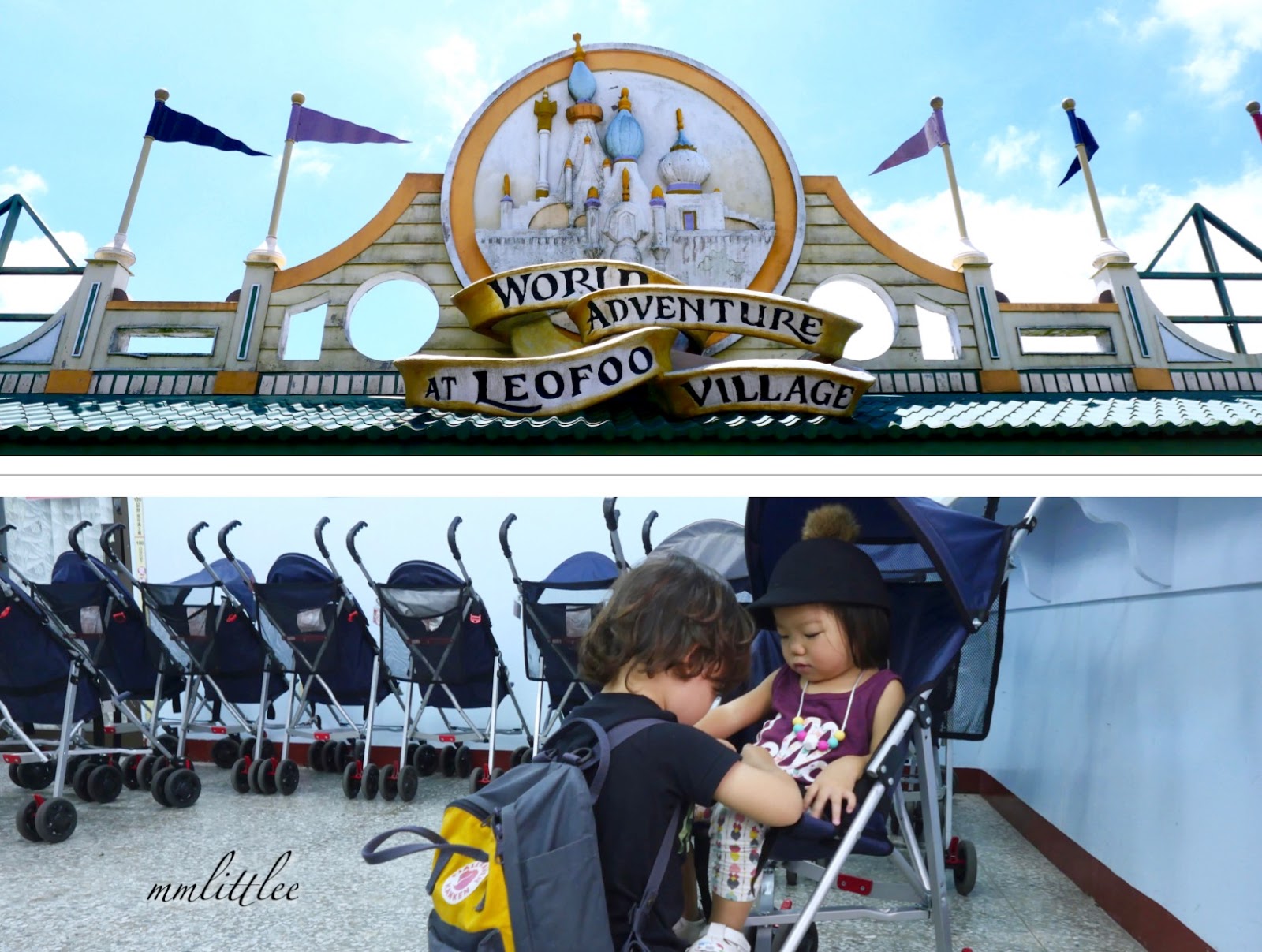 There are four worlds in the theme park: "African Safari", "Arabian Kingdom", "South Pacific" and "Wild West". With them kids still young, we could only embark on kiddy rides and those in itself got Ewan and Faye totally high on adrenaline. Believe it or not, we couldn't finish touring the whole theme park even after spending six hours there. We missed the "Wild West" which I took a quick glimpse at when we were on our way out. It looked picturesque and if we were dressed in cowboy hats, we would have blended in to the T.

[1] African Safari
This is the first attraction on your right when you enter Leofoo Village Theme Park. We were greeted by playful meerkats hanging from large ivory tusks at the entrance. The scene felt like a bite out of the box office hit, Madagascar. It got me all excited!

The Meerkat Enclosure was a very interesting one. There is a tunnel you can crawl into and you will pop up in the middle of the meerkats' enclosure. Wait for a bit and they might come size you out! Pity it was closed for maintenance when we arrived. Check out A Happy Mum's Meerkat Picture on Instagram. 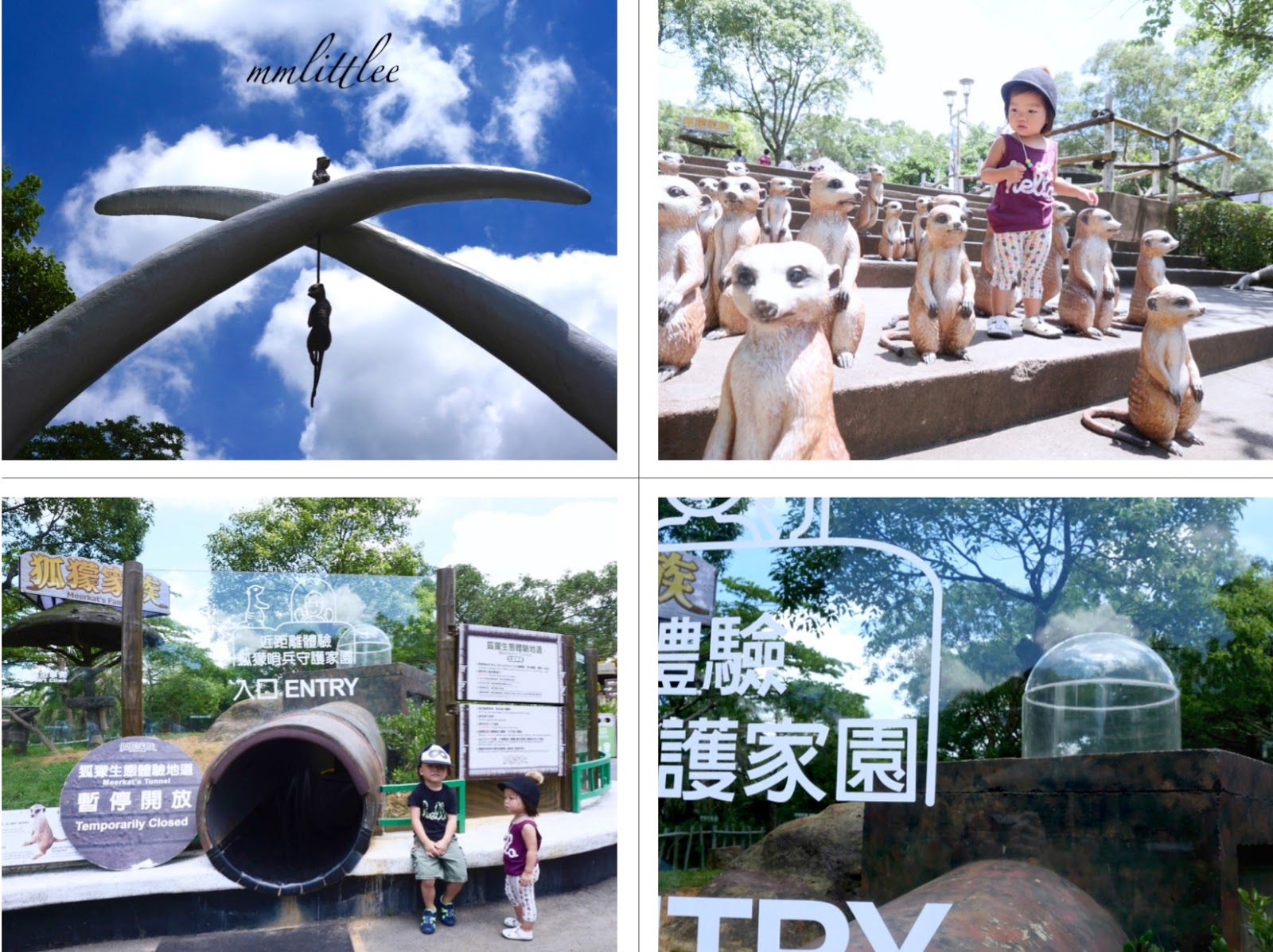 The Nairobi Express brings visitors on a train ride into the Leofoo Safari, featuring only the herbivores. A guide goes on the ride with us, filling us in with interesting stories at each enclosure. One particular hippopotamus caught our attention. We were told that it got into a fight the day before and is now put into a separate section to recuperate. It must have been a bad fight because the wounds were still fresh! Life. It isn't a bed of roses. We have to live it when the going gets tough. 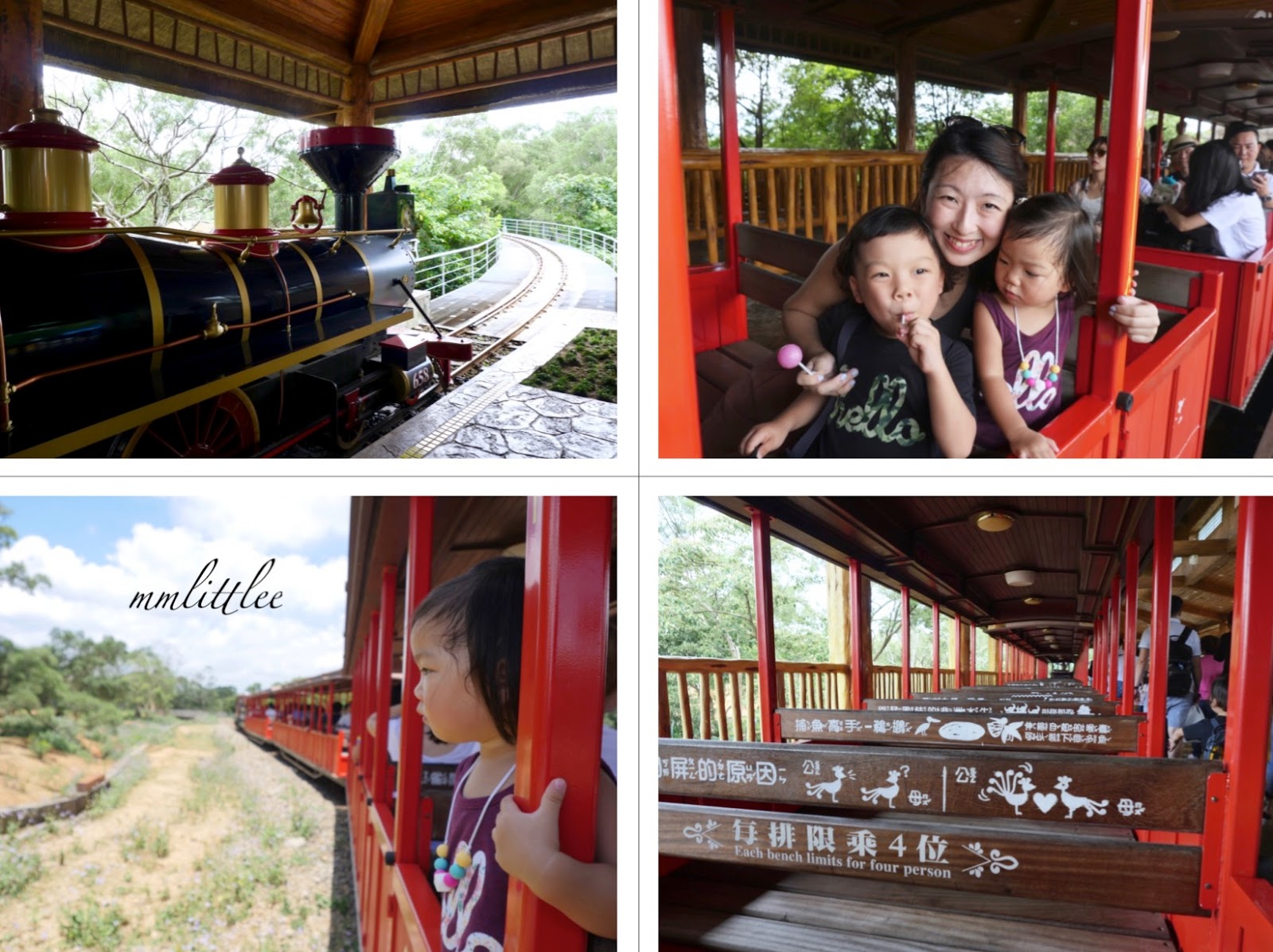 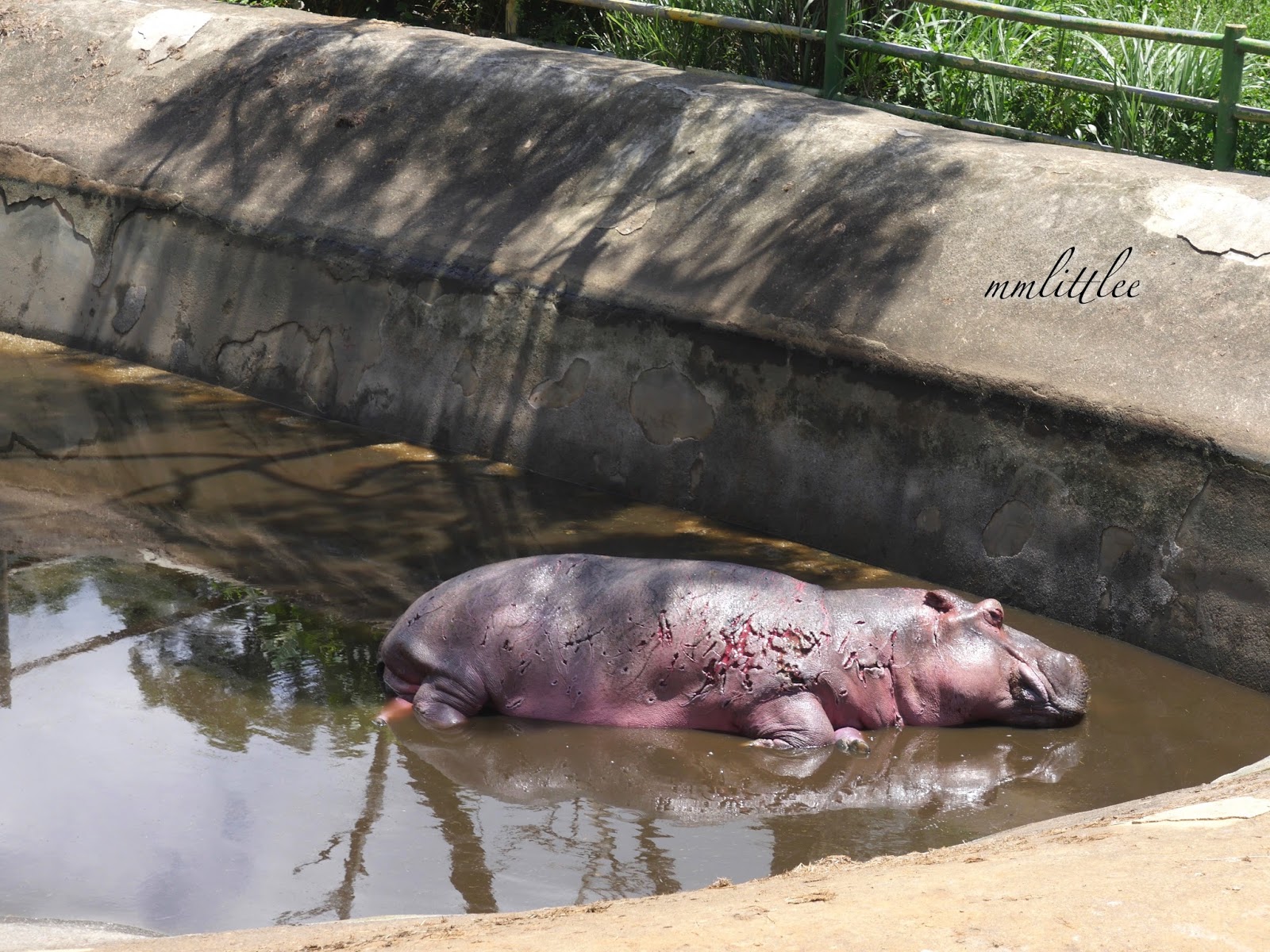 We proceeded to board the Carnivora Area's Tour Bus where we were brought into the homes of gibbons, lions, tigers and bears.  They are locked up in a different section and this drive-through was a quick showcase of these ferocious animals. For a close-up encounter, consider joining a special tour at the Resort where you will be brought to their dens in a caged vehicle [available only for guests aged 10 and above]. 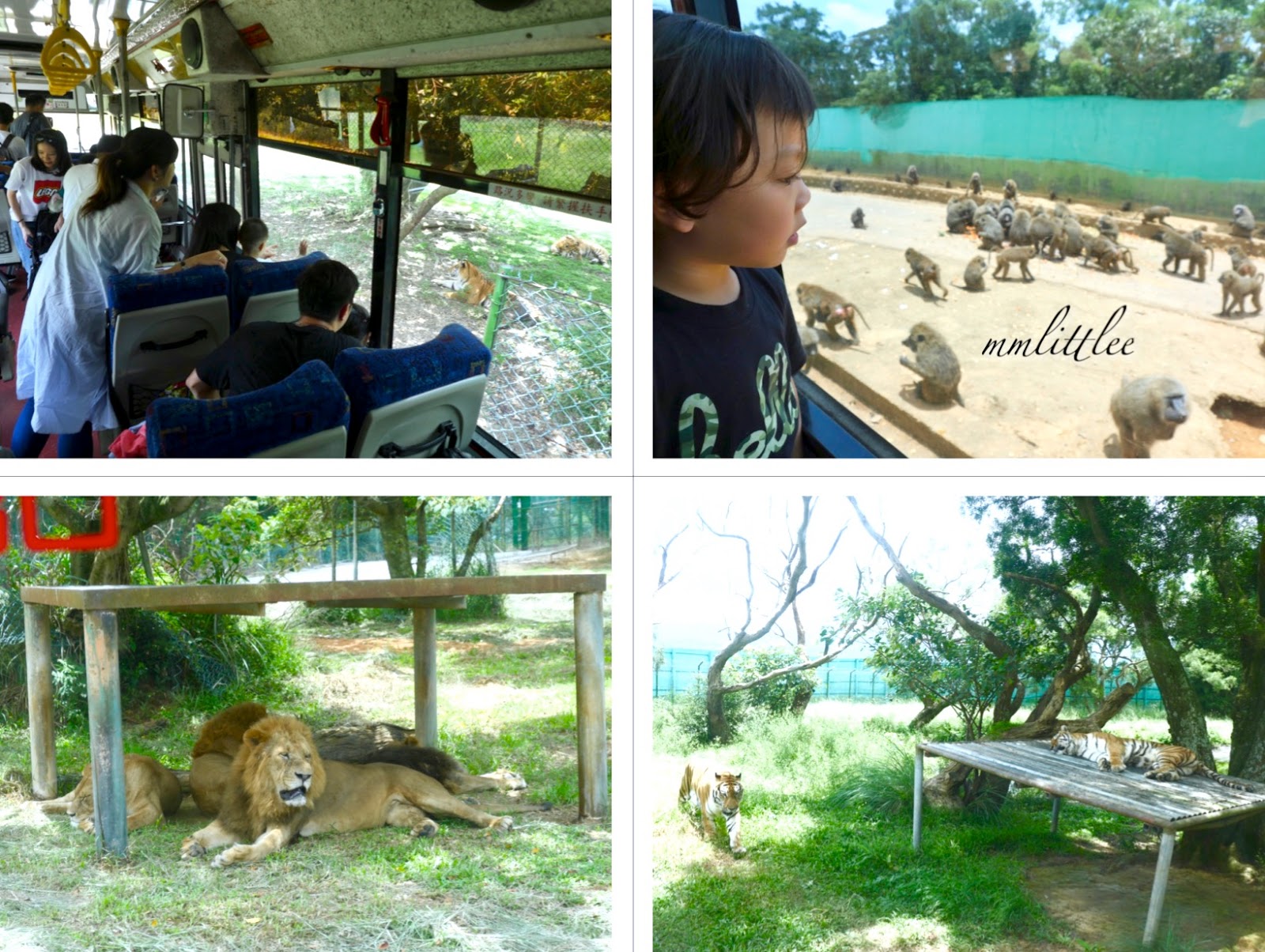 Walking around, we saw people pedalling a Monkey vehicle overhead and we wanted to give it a try! It is called the Monkey Trail and it moves only when you pedal. Obviously, I was the only one doing the job because Ewan does not have limbs long enough to reach the pedals yet! The weather was crazy hot and I was peddling real quick to get back before we got roasted. Well, most importantly, my son had fun. 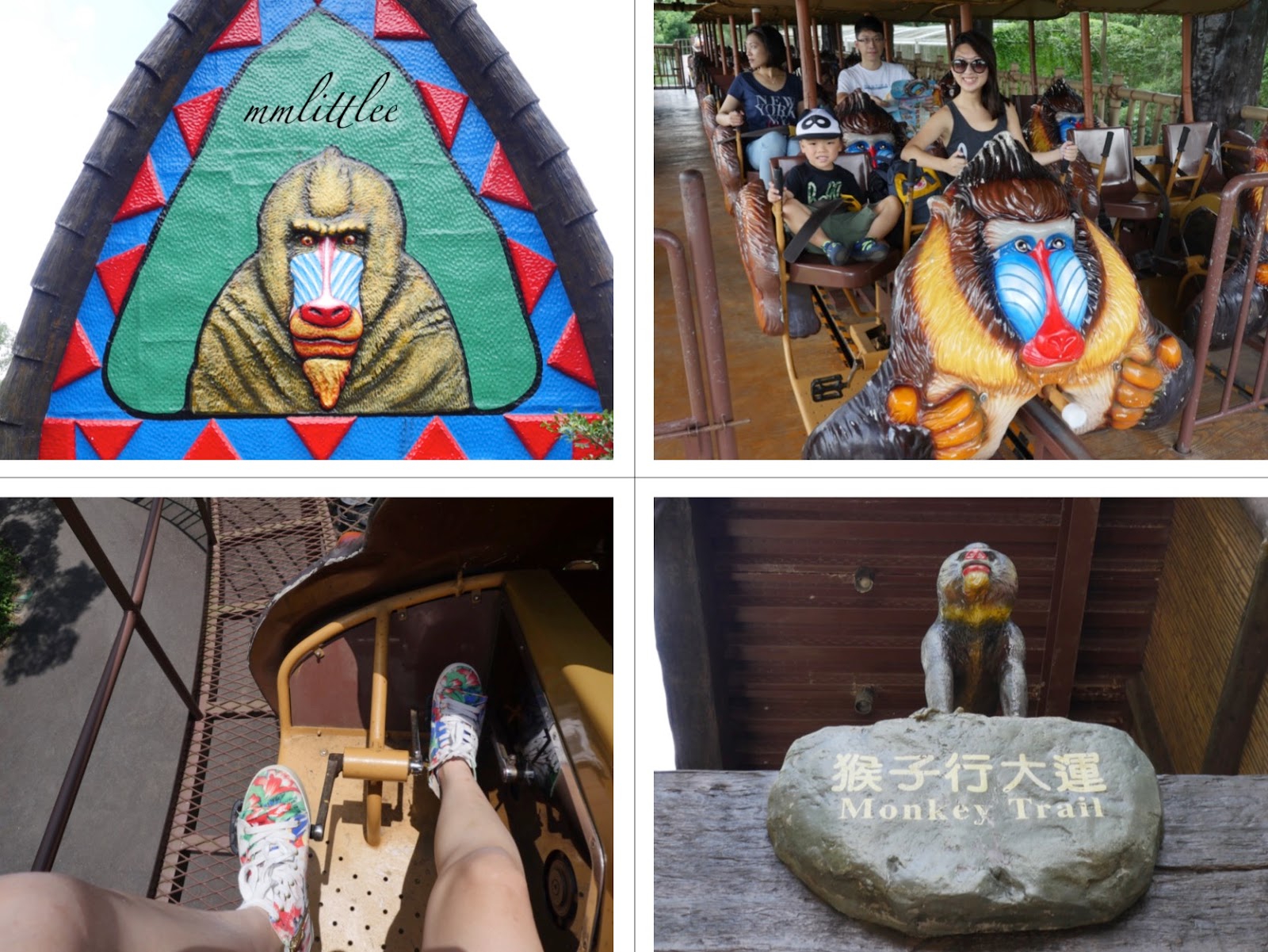 There were many other attractions at African Safari but we took our last ride with Pony Express  Stage Coach before we went on to the Arabian Kingdom. I found this a really adorable ride and totally enjoyed watching the children on it. They had so much fun galloping with the ponies that they went on it twice before I peeled them out of it. It doesn't just go round the track in a stationary motion. The ponies really did bob up and down! 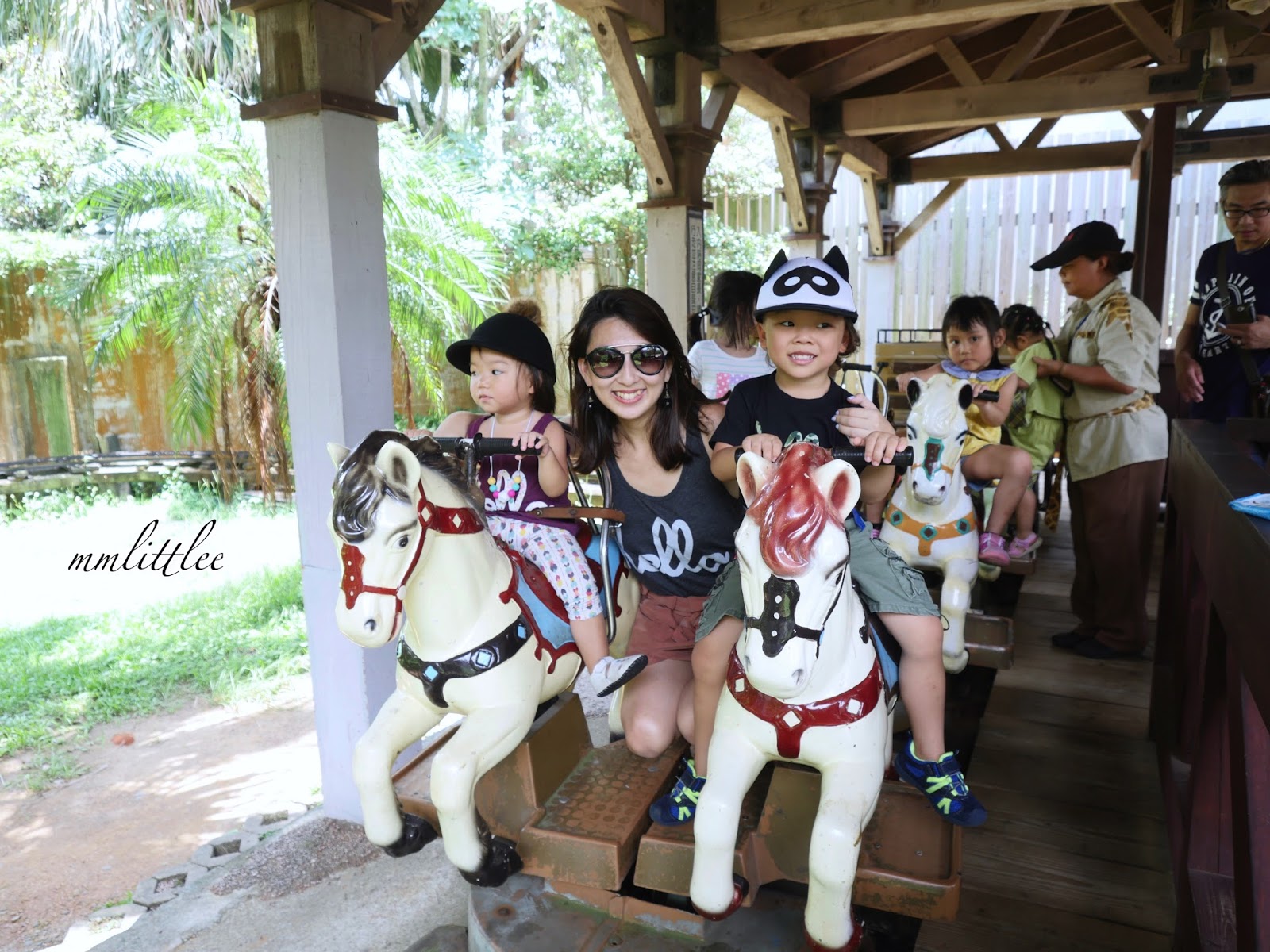 The Zulu Petting Zoo was closed when we were there but we would have met goats and rode on real ponies if it was opened. Read about how much Dana enjoyed the experience at Life's Tiny Miracles' account of Leofoo Resort.

[2] Arabian Kingdom
I was smitten by its architecture the moment I entered. We were transported to the world of Aladdin! The Flying Horse looked really impressive but we didn't go on the ride because it was the middle of the day and the sun was quite a killer. It is a beautiful sight to look at from where we were though. A pegasus in flight in trimmings of rich gold and arches. 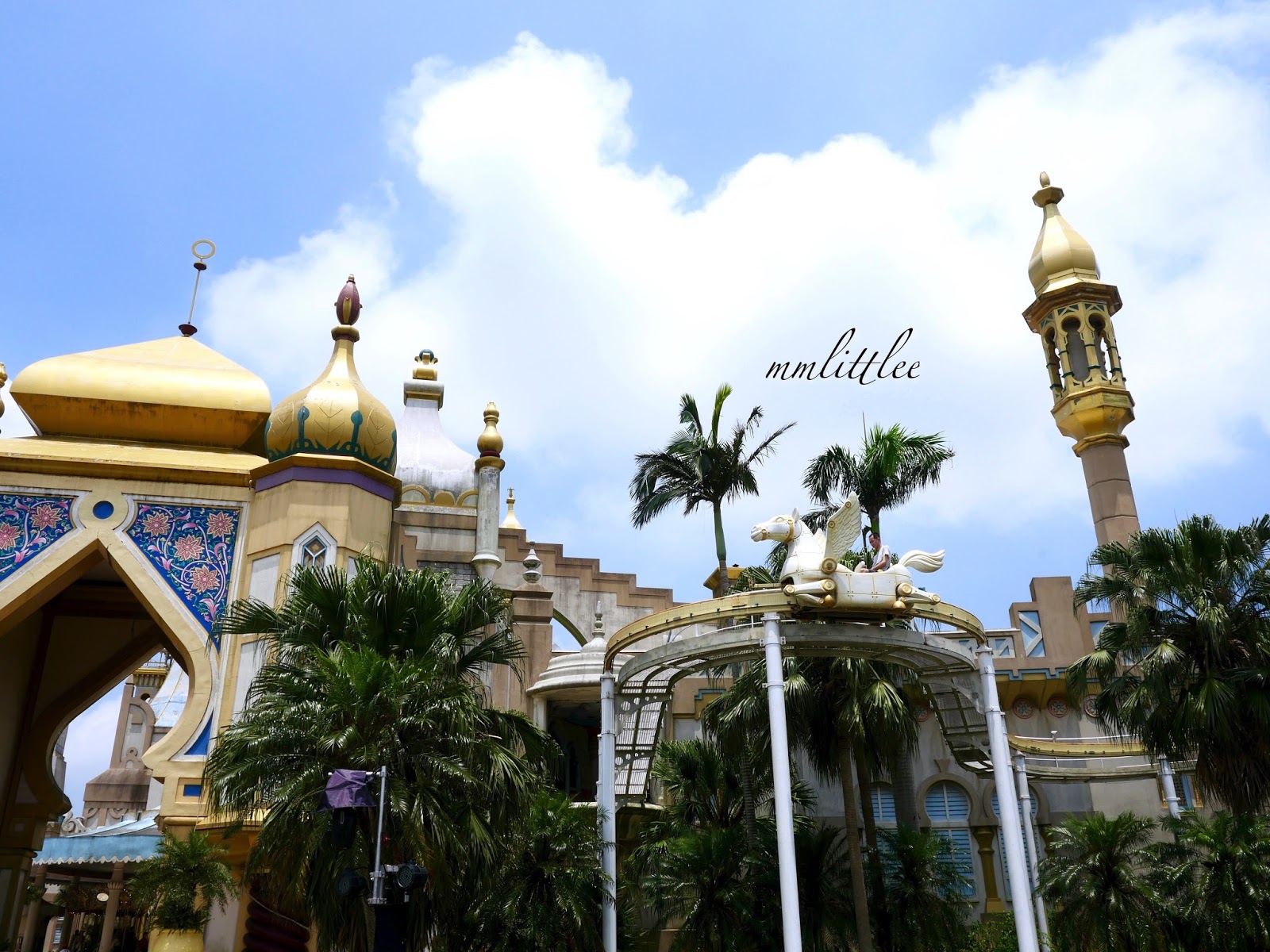 Ali-Ba Ba and The 40 Thieves is Asia's most beautiful carousel I've seen. I say Asia because there are so many intricately-designed ones in Europe that just take your breath away in an instant. Yet in Asia, many are just a functional merry-go-round. This carousel in Leofoo Village Theme Park won my heart with its colours - gold and duck egg - lights and mirrors! 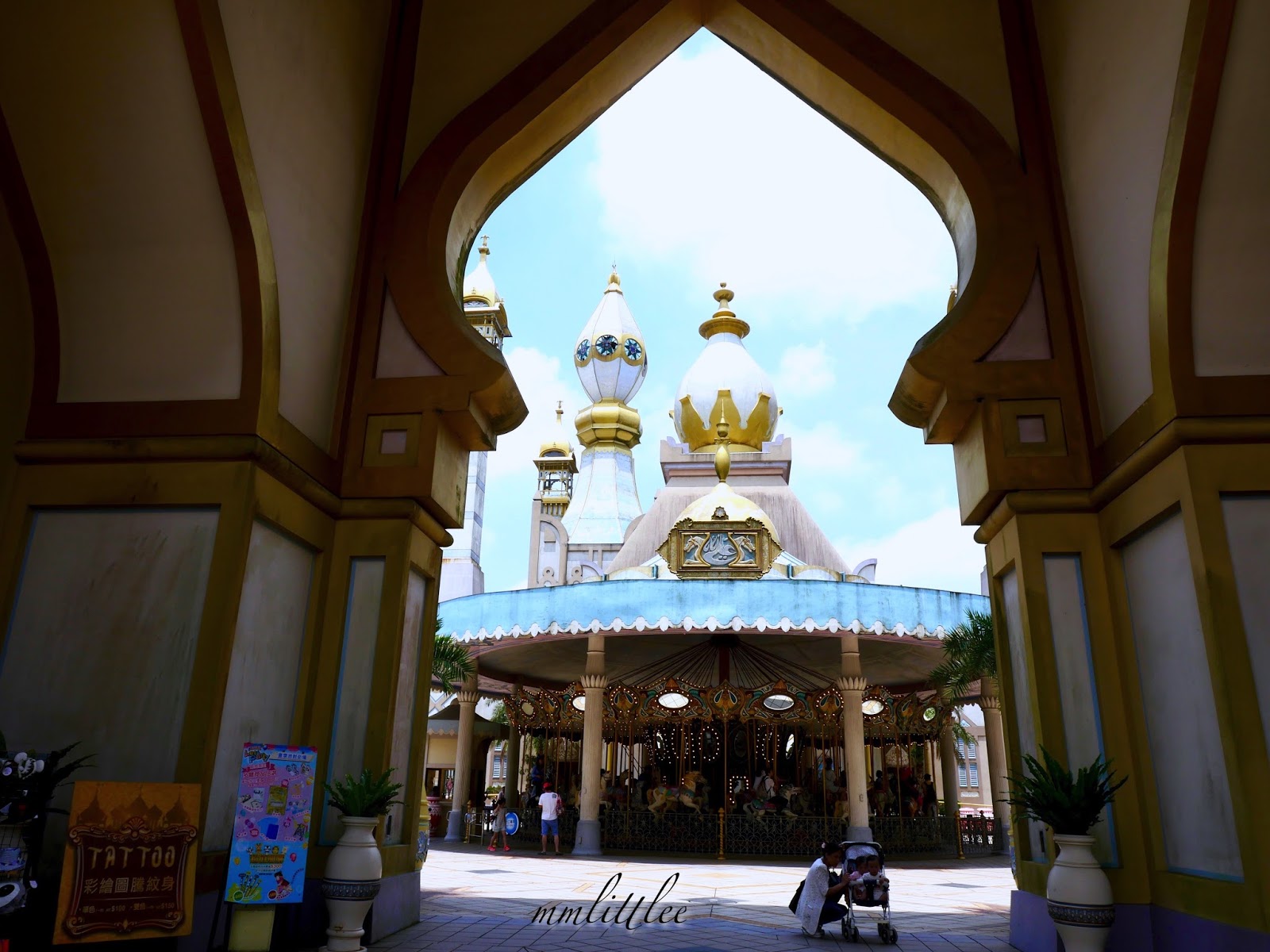 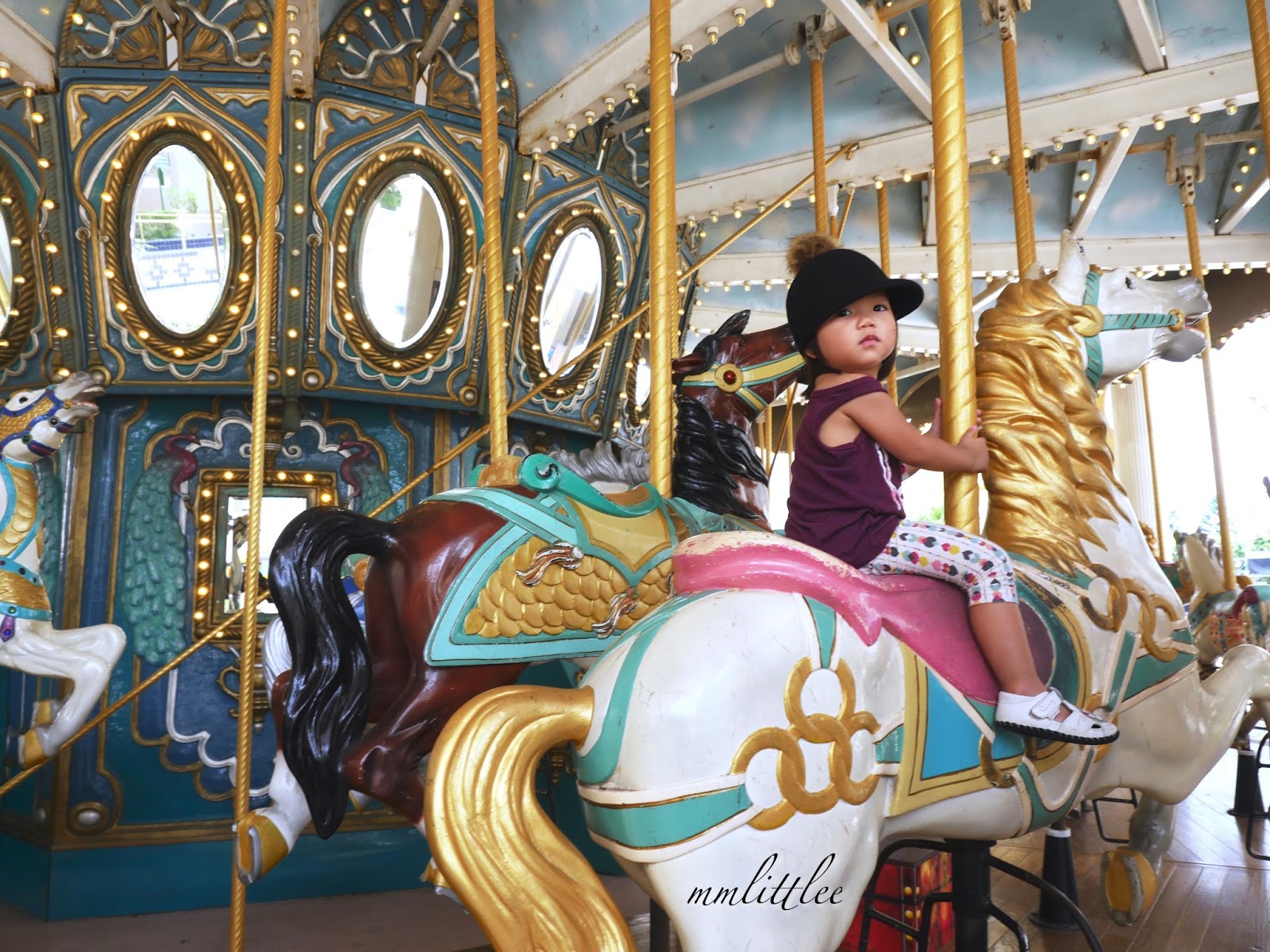 What do you say mommy give Ring of Fire a go? A ride that goes round 360 degrees and I was not impressed at all. Whoops! Ewan and Faye waited for me [I made a friend, Cathy, who came along with us on our theme park adventure and she watched the children as I gave this a go] as I took the ride without a squeak. I was excited initially but I thought it was too slow for my liking. I need a vertical drop kind of thrill and this was just like a swing to me. Beautifully designed though! I couldn't stop admiring it. 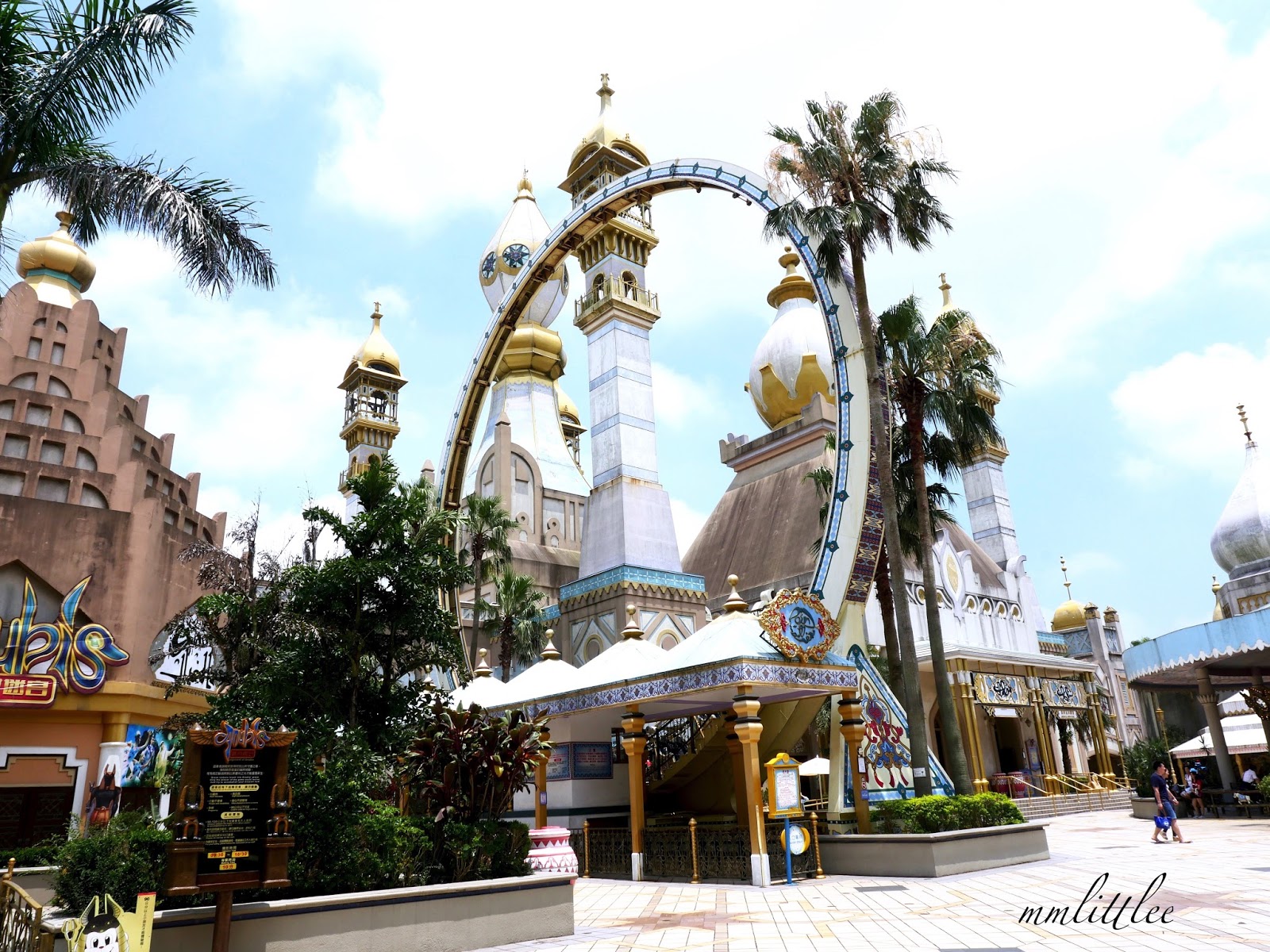 We dined at the Aladdin Restaurant and we were very impressed with the interior decor of the restaurant. There is a humungous three-dimensional genie in the corner and although it isn't exactly a play area, children were climbing all over him. The children's menu here comes with Aladdin themed utensils and you can bring it home with you! Nice! I found the food not as palatable as the Khana Ndenjei restaurant at South Pacific. So if you want to go for a fun interior, choose Aladdin. Should quality of food be more important, go for the main restaurant in South Pacific. They serve fried chicken! Yums! [3] South Pacific
Walking from Arabian Kingdom to South Pacific felt so unreal! The theme changed drastically and we found ourselves surrounded by tropical palm trees, rattan huts and a life-size Apatosaurus! I liked the way the designers had put together this stand-alone oasis. Rides-wise, they've got a good mix for the thrill-seekers and young ones.

The Rocking Steamboat was awesome! We didn't see how the ride went before we boarded and I had thought it was just a mini viking. Half-way through the ride, the boat turned in circles and caught us by surprise! Oh we couldn't stop laughing. 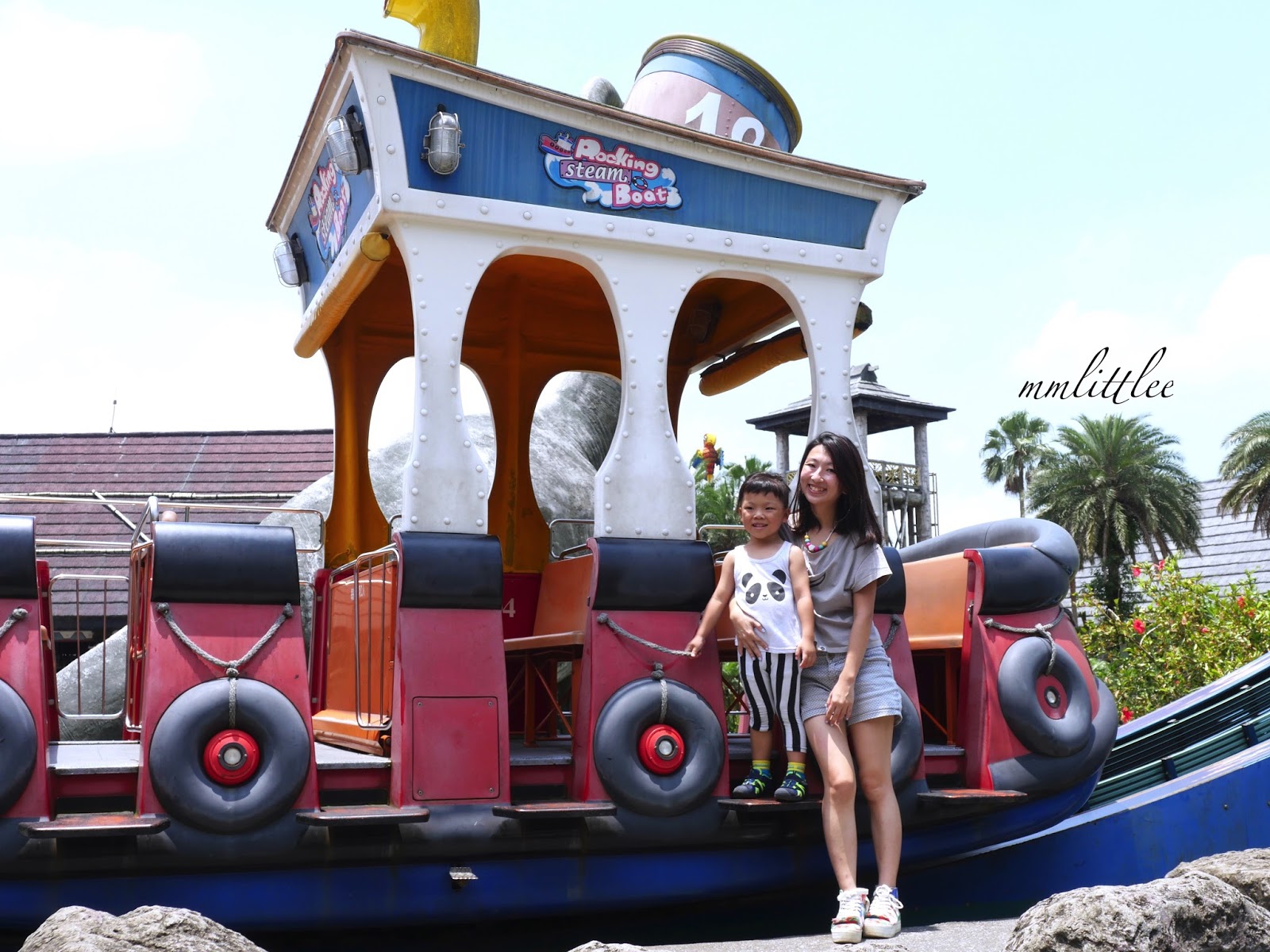 There is a 110cm height limit to Mighty Mountain Flume Adventure [Life's Tiny Miracles went on the ride!] and as much as I wanted to go on it with Ewan, we couldn't. It is a water coaster and we saw many people screaming their hearts out as their canoes dived straight down from a three-story volcano! 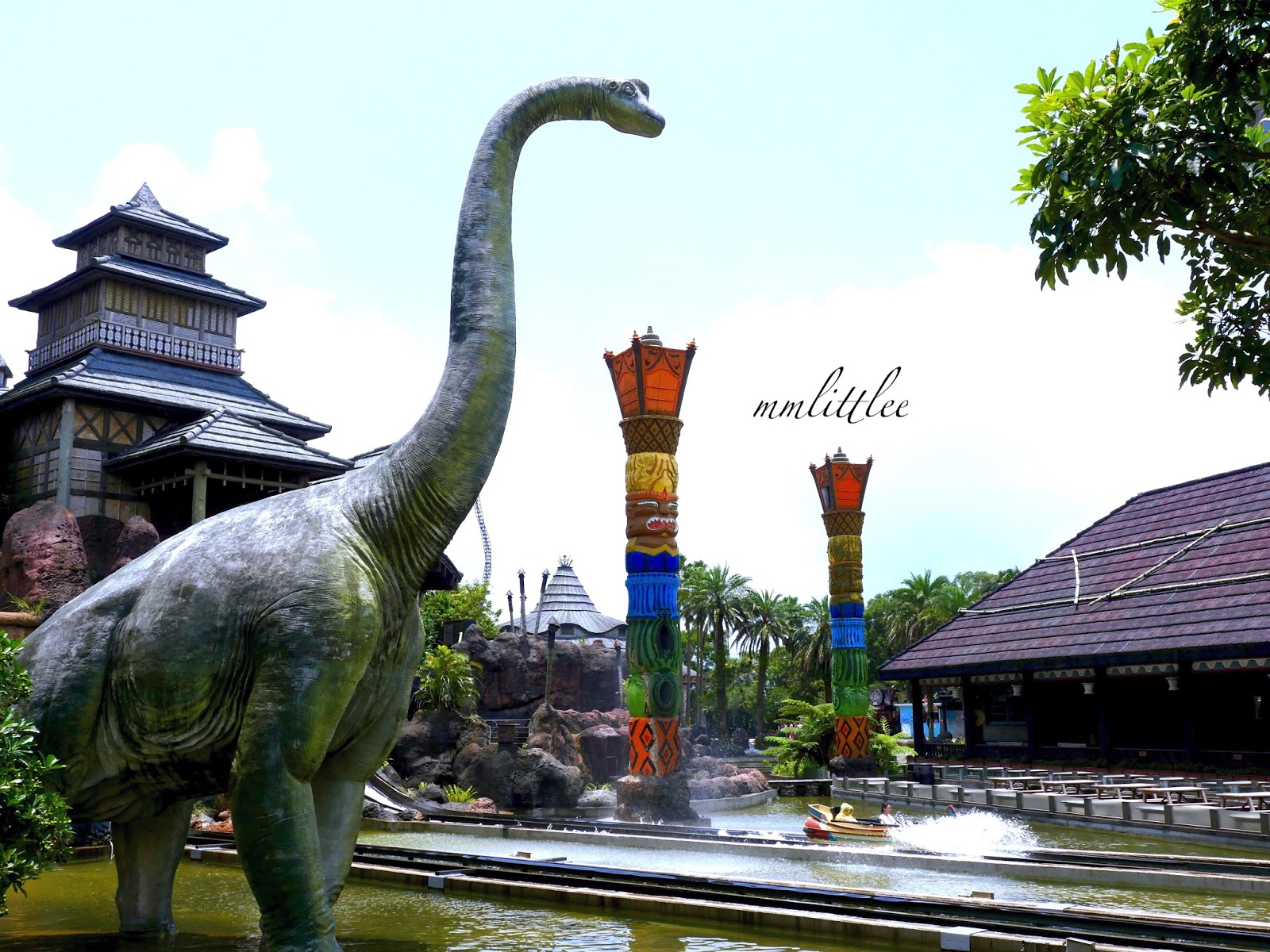 Captain Cook's Swinging Ship looked so inviting! It is a massive ship! It swings back & forth at 70 degrees and goes up to seven stories high! I would have enjoyed this one I'm sure but I gave it a miss because the children were excited to go on rides with mommy rather than seeing me go on rides myself. 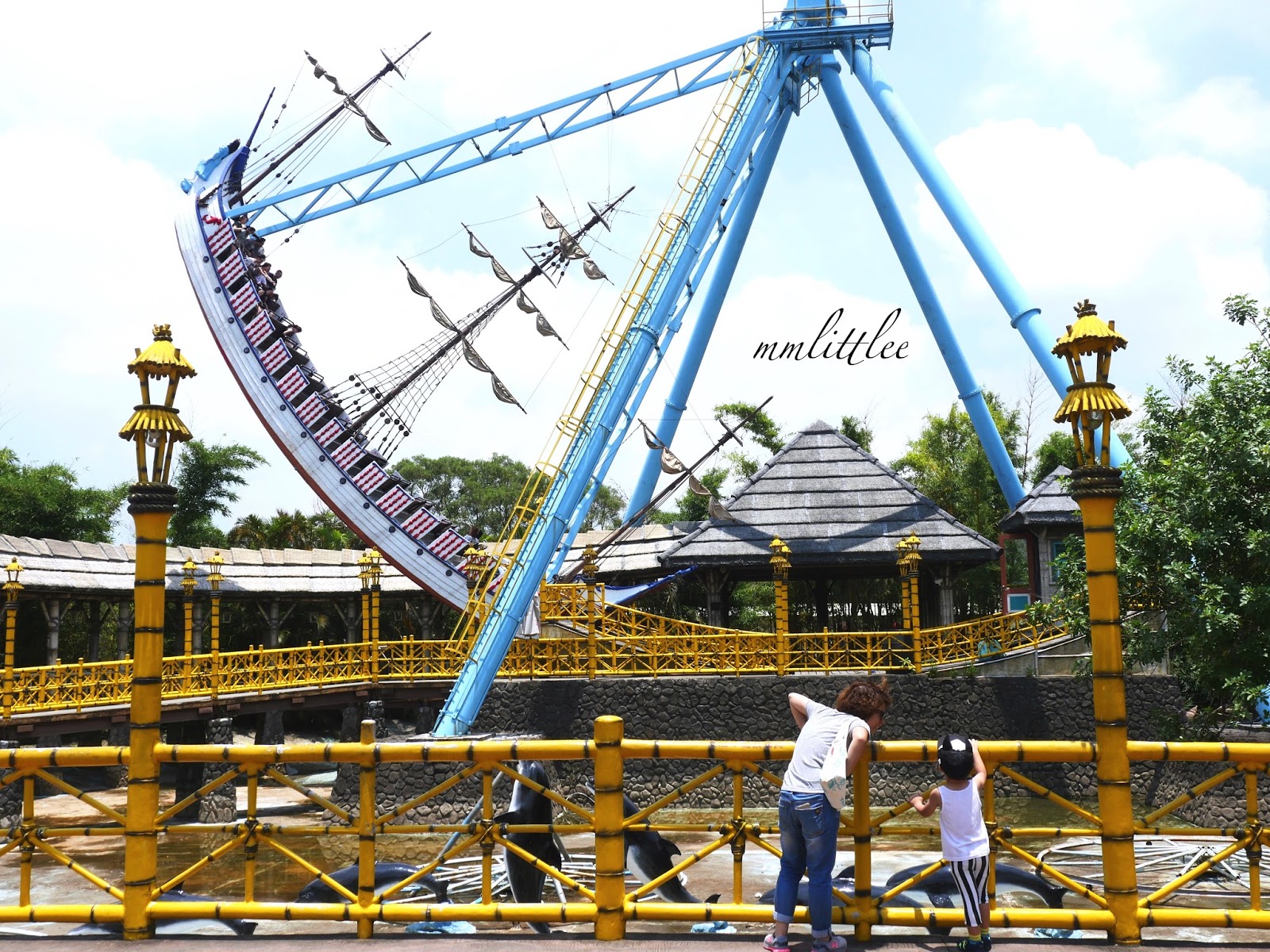 As long as Faye was accompanied by an adult, we were through most rides here at South Pacific. One such ride was Bird Flight. It is a simple merry-go-round flight in a Toucan and passengers can determine the height of the bird by pulling a lever. Children are easily satisfied and this was very enjoyable. 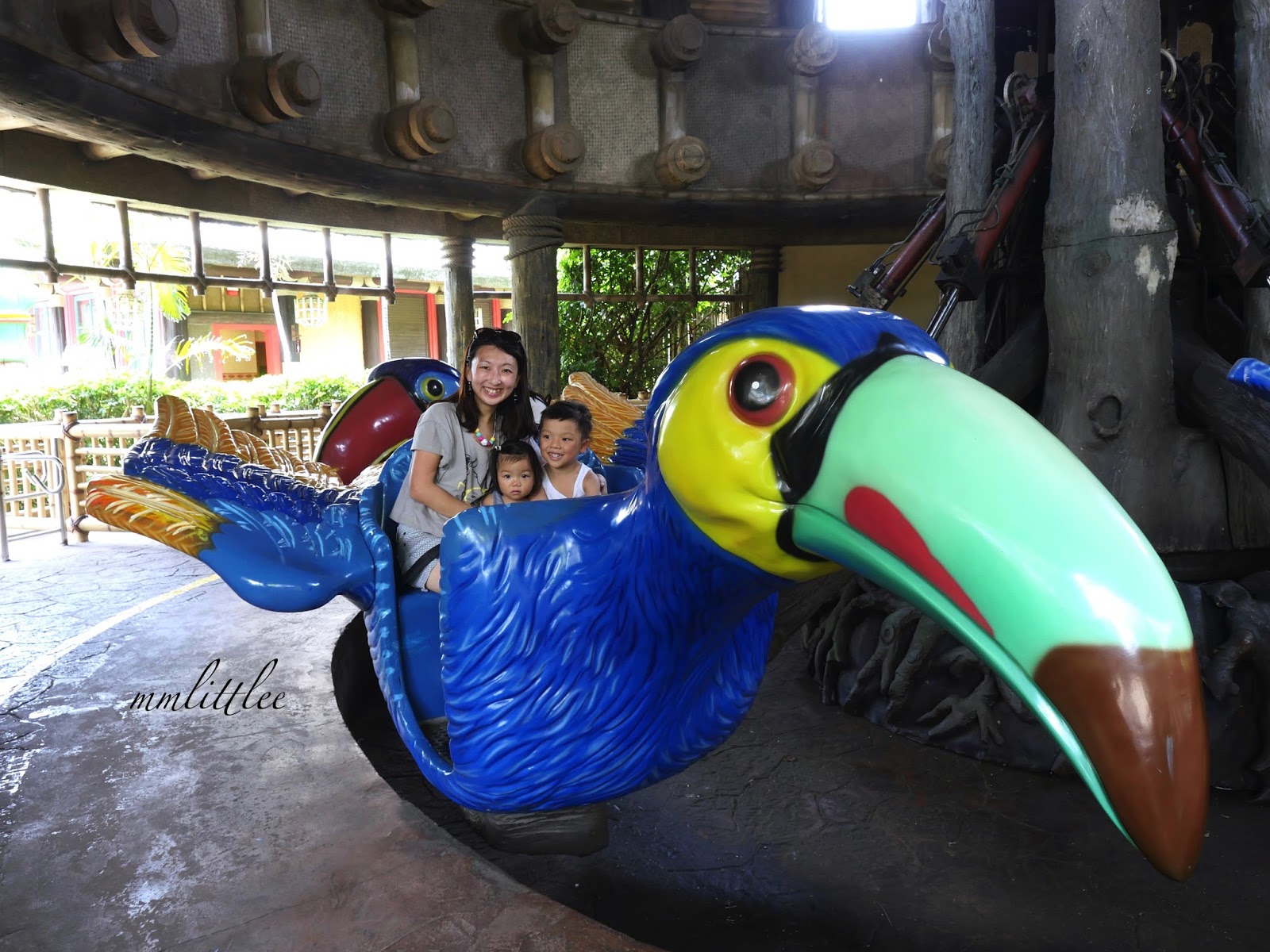 As we were leaving South Pacific, we stumbled upon a mini ferris wheel which the kids wanted to a ride in. Nothing fancy and it does not give you a bird's eye view of anything but they beamed with pride at touch down. 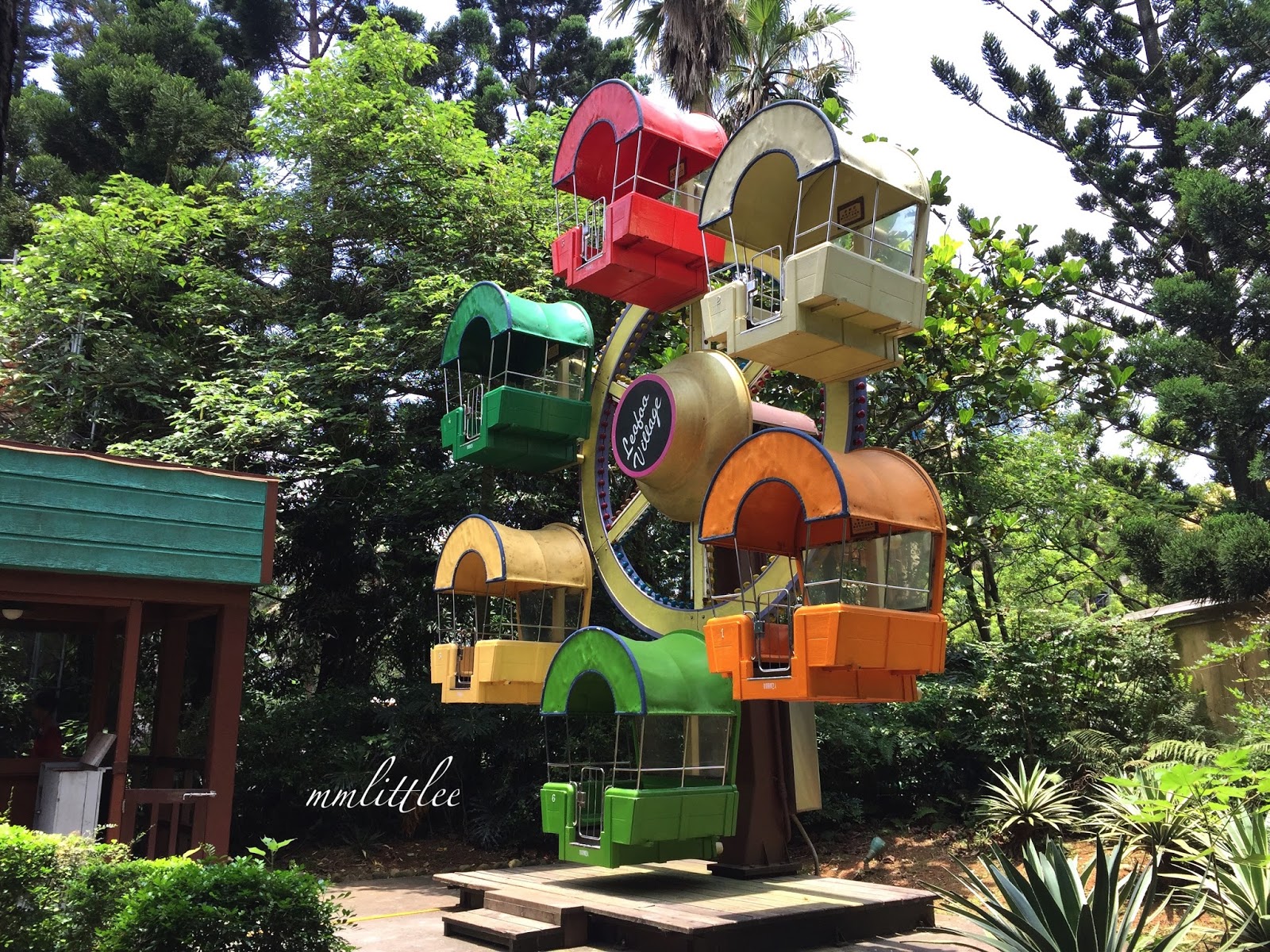 [4] WILD WEST
The aforementioned rides are not all that the theme park has to offer. I cannot help but wonder what Wild West will have in store for us if we had stayed a little longer. Unfortunately, children four years and under still need their afternoon naps. If time permits, spend one full day at Leofoo Village Theme Park. I enjoyed it thoroughly but do avoid Summer [June to September] because it's really no fun playing in the sweltering heat. It was so hot I felt like I was in Dubai!

However, if June to September is the only time of the year that you can take some time off for family travels, you'd be stoked to hear that Leofoo Water Park is opened! So hey! You might have to add one more day to your Leofoo stay to enjoy a splashing fun time with the family!

Our little Travel companions
June 2016 - Ewan at 4 years old and Faye at 2 years old
Click on our Travel tab to read all about our travel tips and tricks
including our Taipei for Kids post, Leofoo Resort and our Flight on a Hello Kitty Jet!

A stay at home mum, blogging to widen her social life.
We want to echo the sound of love through our lives to inspire other mothers alike.
Email Post
Labels: 2yo 4yo Ewan family Faye Leofoo review solo-parenting Taiwan theme park