Skip to main content
Labels
Posted by May August 22, 2015

Where Are The Goats?

2015 is the year of the Goat according to the Chinese zodiac. There are debates about the correct term for the Chinese character 羊 (yáng). Should it be the year of a Goat, Sheep or Ram? The word 羊 is a generic term and can refer to a sheep (绵羊), goat (山羊), ram/buck (公羊 male sheep or goat), 羚羊 (antelope), etc. There is a lack of clear definition on the zodiac "Goat" in Chinese history. However, most Chinese people and experts on folklore believe that the Chinese zodiac animal is the Goat. Firstly, the Chinese zodiac is an invention of the Han Nationality, and goats were widely raised by the Han people (unlike sheep). Secondly, a Goat image often appears on Chinese zodiac stamps, New Year paper cuttings, and New Year paintings (not a sheep). Thirdly, the Goat was one of the 12 bronze statues of the Chinese zodiac at the Old Summer Palace. So there. Goat is likely it.

We found three goat murals at Tiong Bahru Market this morning! Ernest Goh, a photographer and visual artist, is back again this year to spruce up the the hood of Tiong Bahru with the Goat's theme. Do you remember the animal murals he put up last year at the Tiong Bahru Heritage Fiesta? You can be sure to find the Goldfish still standing next to Tiong Bahru Post Office but please do not go on a wild goose hunt for the Roosters because they have already been taken down.

Back to the three billy goats, they are situated in Tiong Bahru Market itself. We took a nice breakfast at the market, strolled around the building and went on a hunt for Ernest's Goats. I asked him for a map but he replied, "No need for map this time :) The 3 kids are in and around Tiong Bahru market." Sounds easy huh but I think I should still get a map drawn up (with the goldfish) in case you have a grumbling husband and fussy kids.

Introducing the three kids on the block!

My favourite is the littlest one. She (well, I think its a girl) is so adorable! I cannot believe my kids are smaller than her *haha* and that made the series of pictures with her look so cute. I brought a prop for it too. A wooden KID in cursive font just because I had one at home. We arrived at 0900 hours and I must say it wasn't a good time to photograph this kid (the goat not my kids) because the sun was shining right at her face. We returned again at 0945 hours and got these wave of photographs.

Locate: She is at the foot of the staircase inside Tiong Bahru Market. There are two main staircase from the food center to the wet market on the ground level. This is the staircase from where the famous Soya Bean Drink sits. Still don't get it? See map marked with an X! 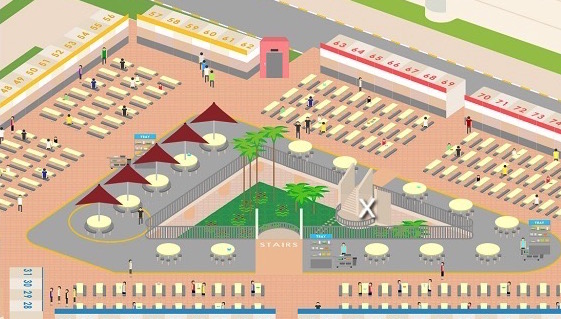 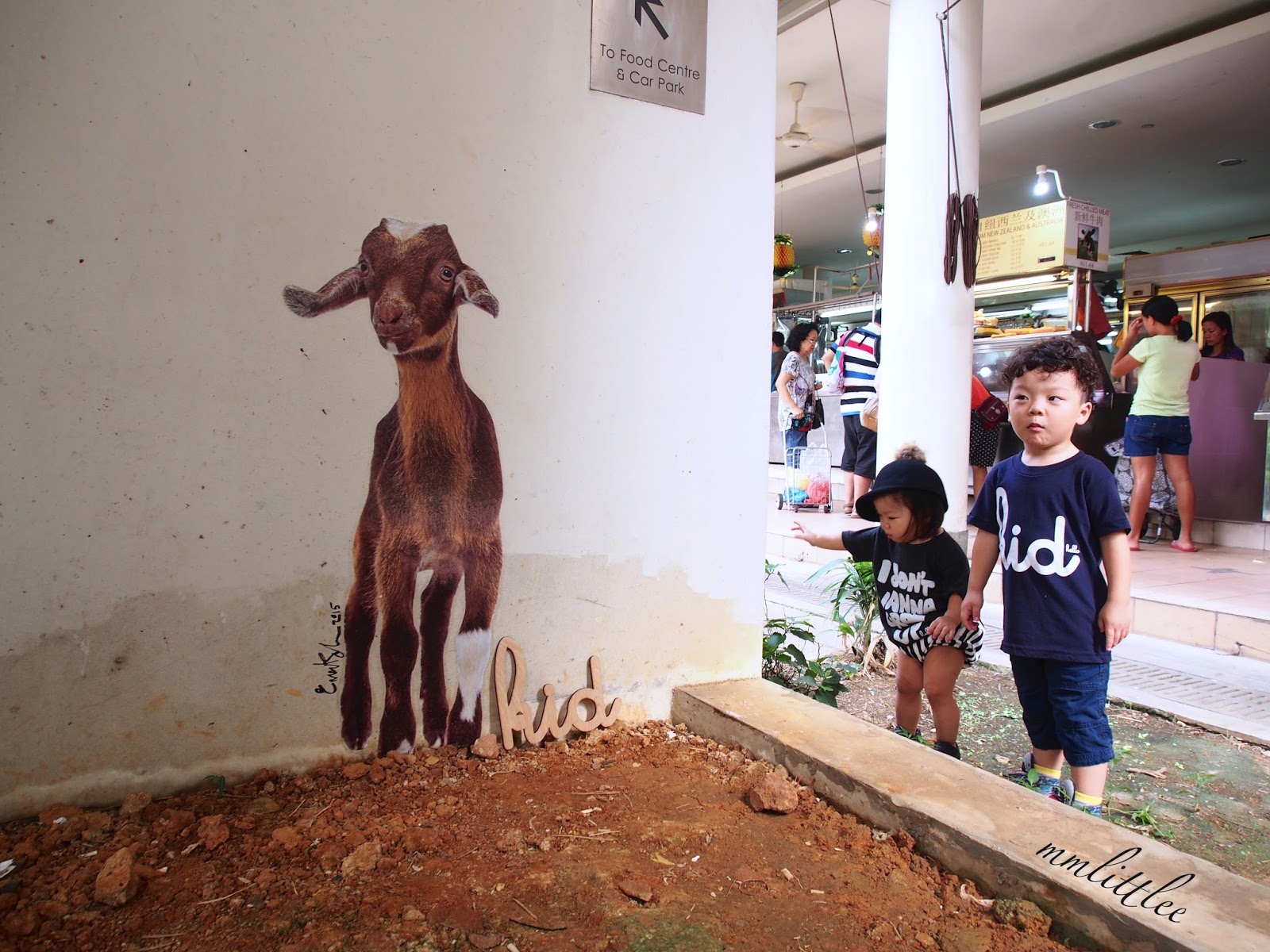 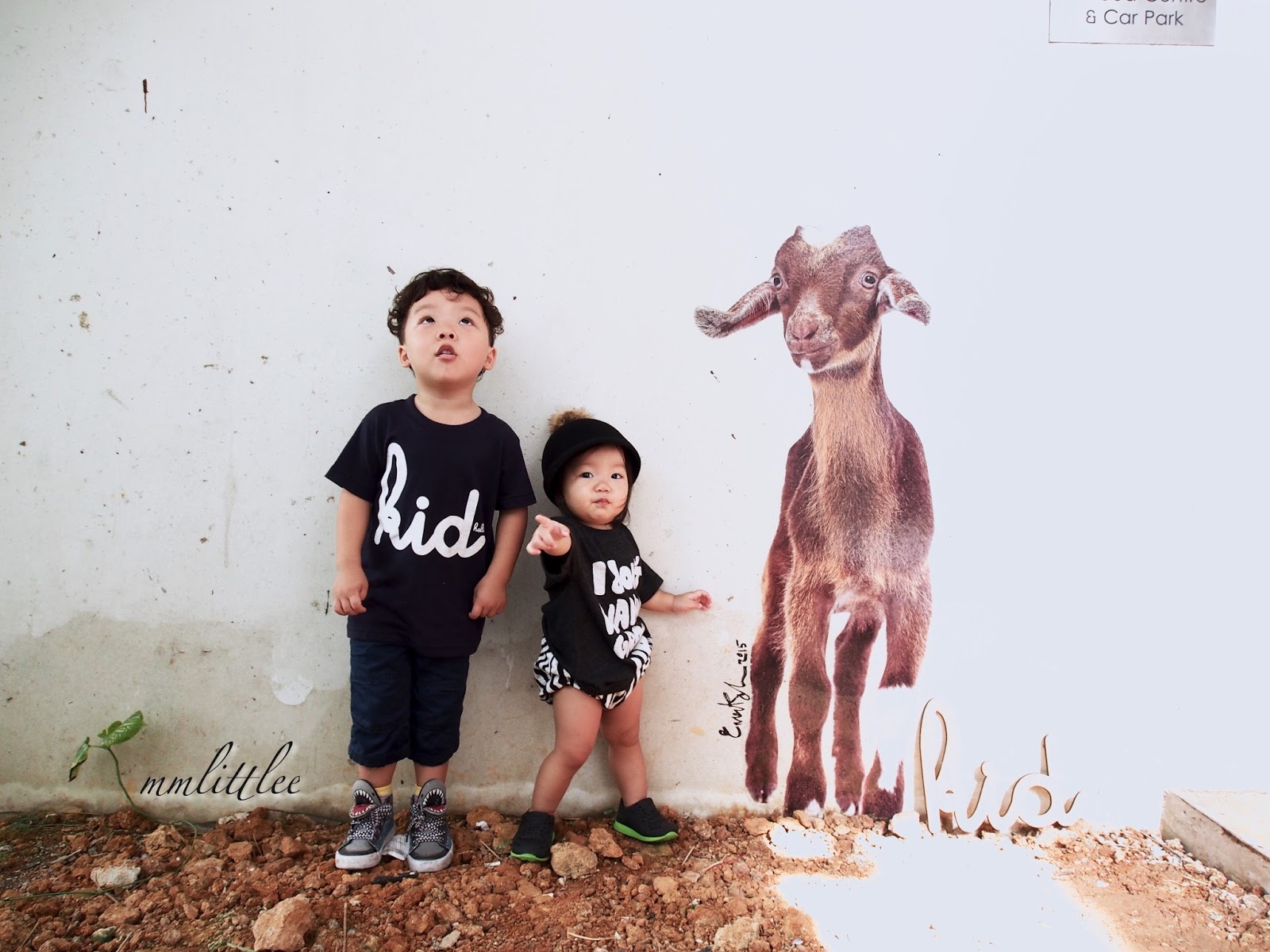 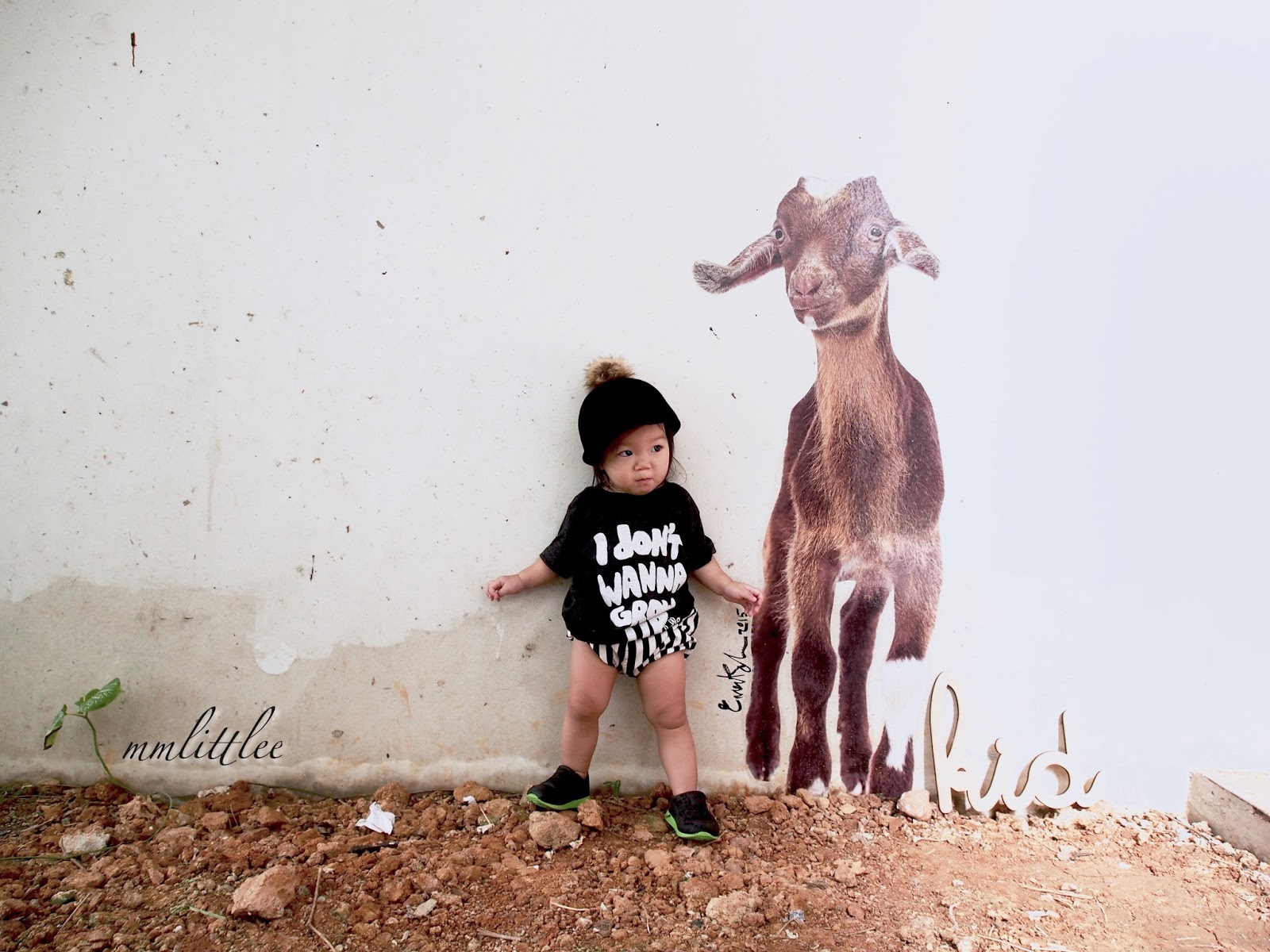 My second favourite piece is the largest goat that Ernest photographed for Hay Dairies Pte Ltd for their Pure Goat Milk advertisement. I really liked this one because it makes a statement with its size. It is a photograph-turned-sticker and not a painting, no wonder it is detailed to its last strand of fur.

Locate: Take a walk out of the market, directly across from this staircase, and turn left. Pass the Loading and Unloading parking area and do a left turn again. The second Goat mural is by Lim Liak Street. 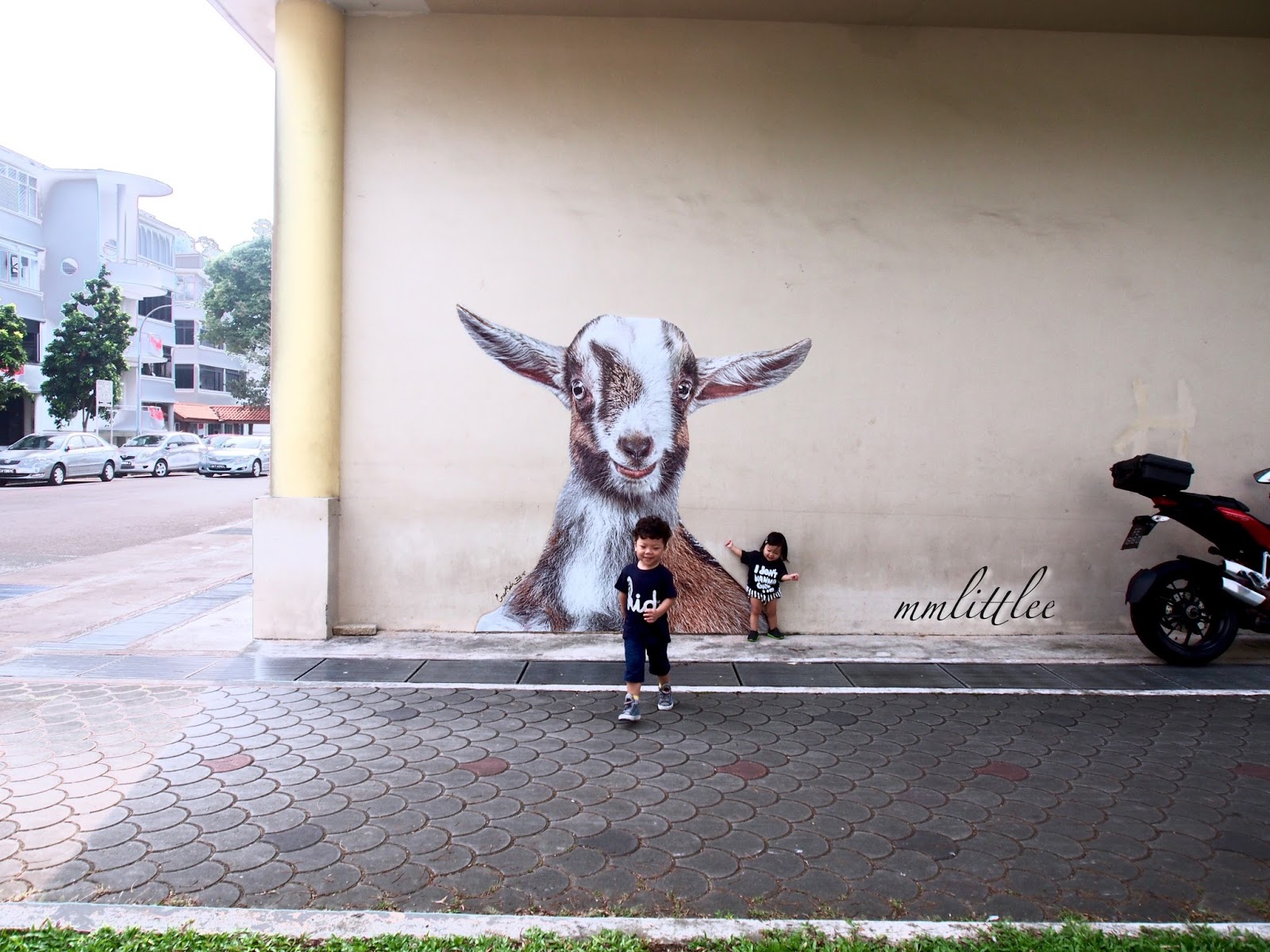 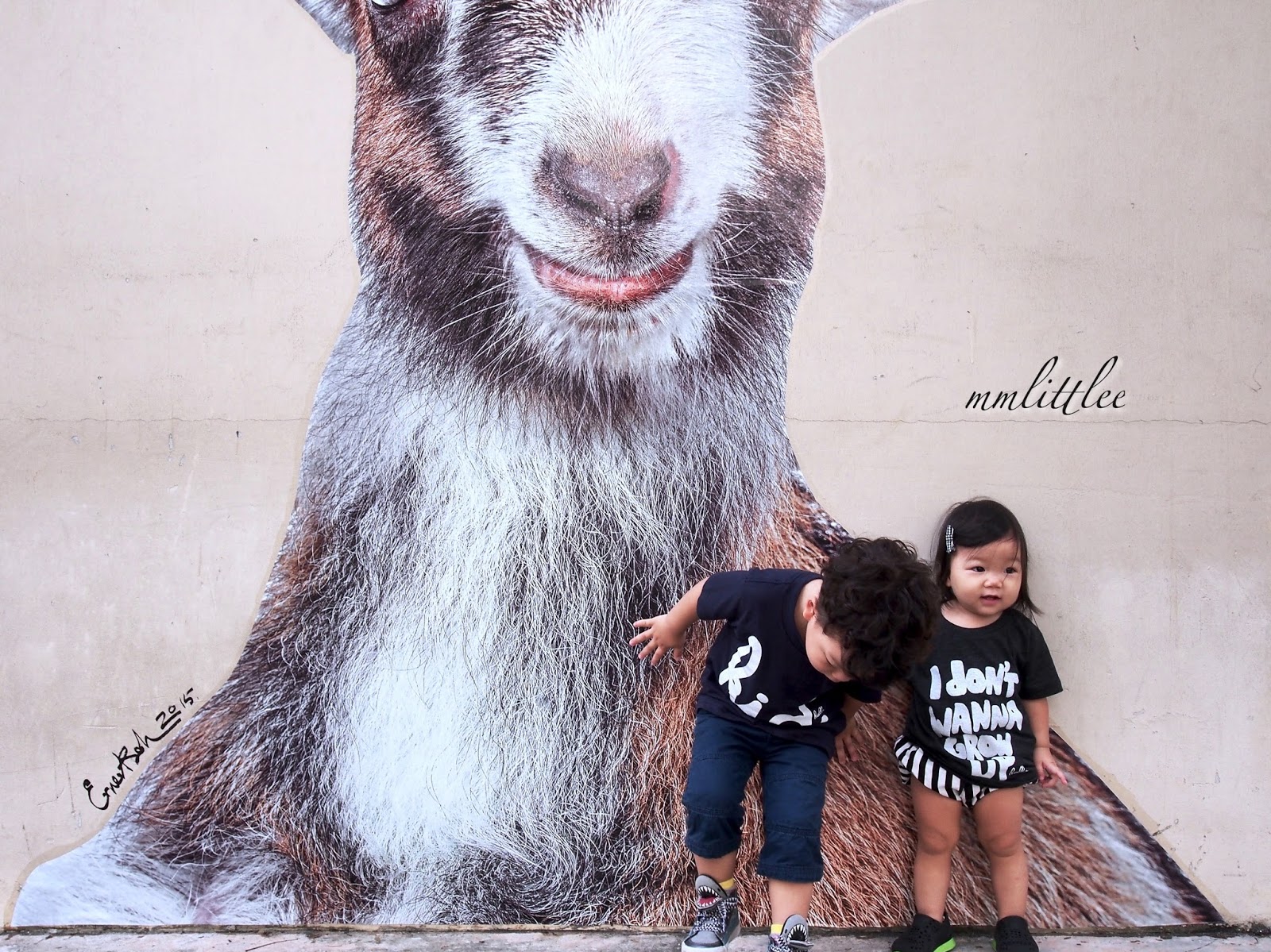 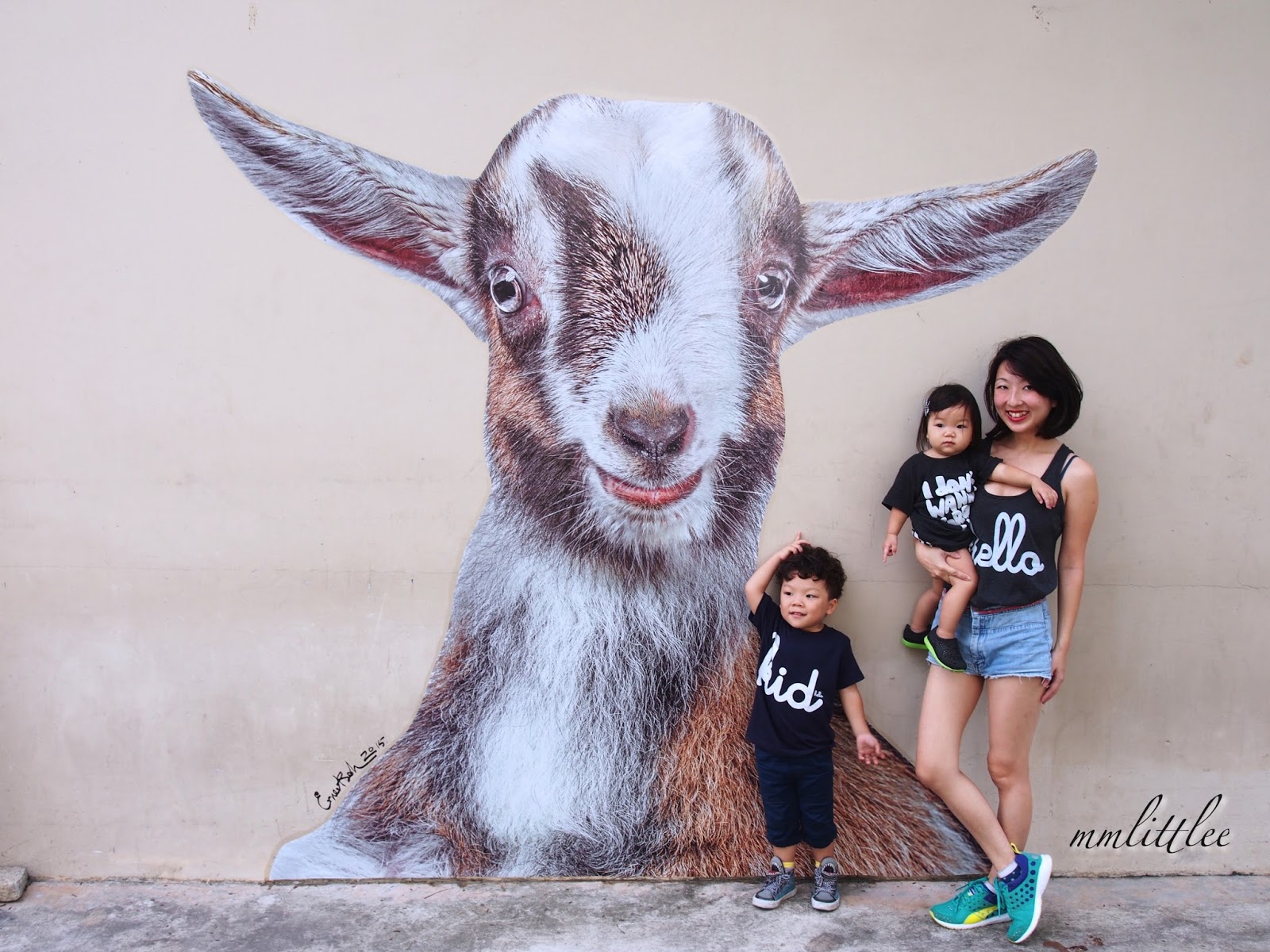 Then third installation is placed on a wall behind a shrub. Seriously, I have no idea how they put this up without any hassles. Must have got poked several times! I loved Faye's reaction when she saw the goat, "Gah Gah Gah". Well, I would have been prouder if she said, "Meh Meh Meh". I guess "Gah Gah" works for now. At least she is trying to tell me that she say a Goat. Check out Ewan in this picture below. He was signing "FOUR" because he said he will let me take his photograph if I gave him four fish biscuits.

Locate: It is by the exit of the Tiong Bahru Market carpark. Easy Peasy! Need no further directional explanations to this. 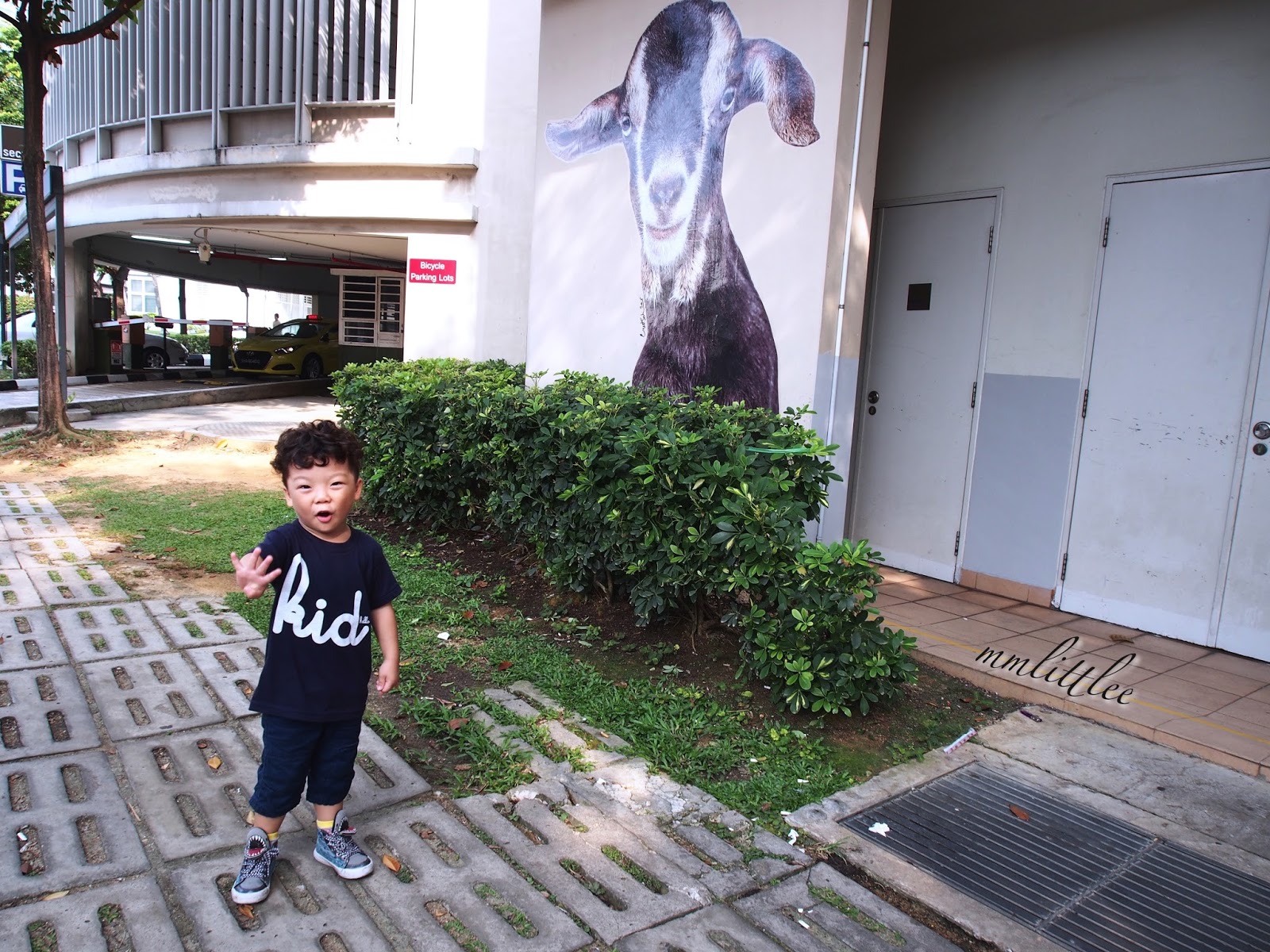 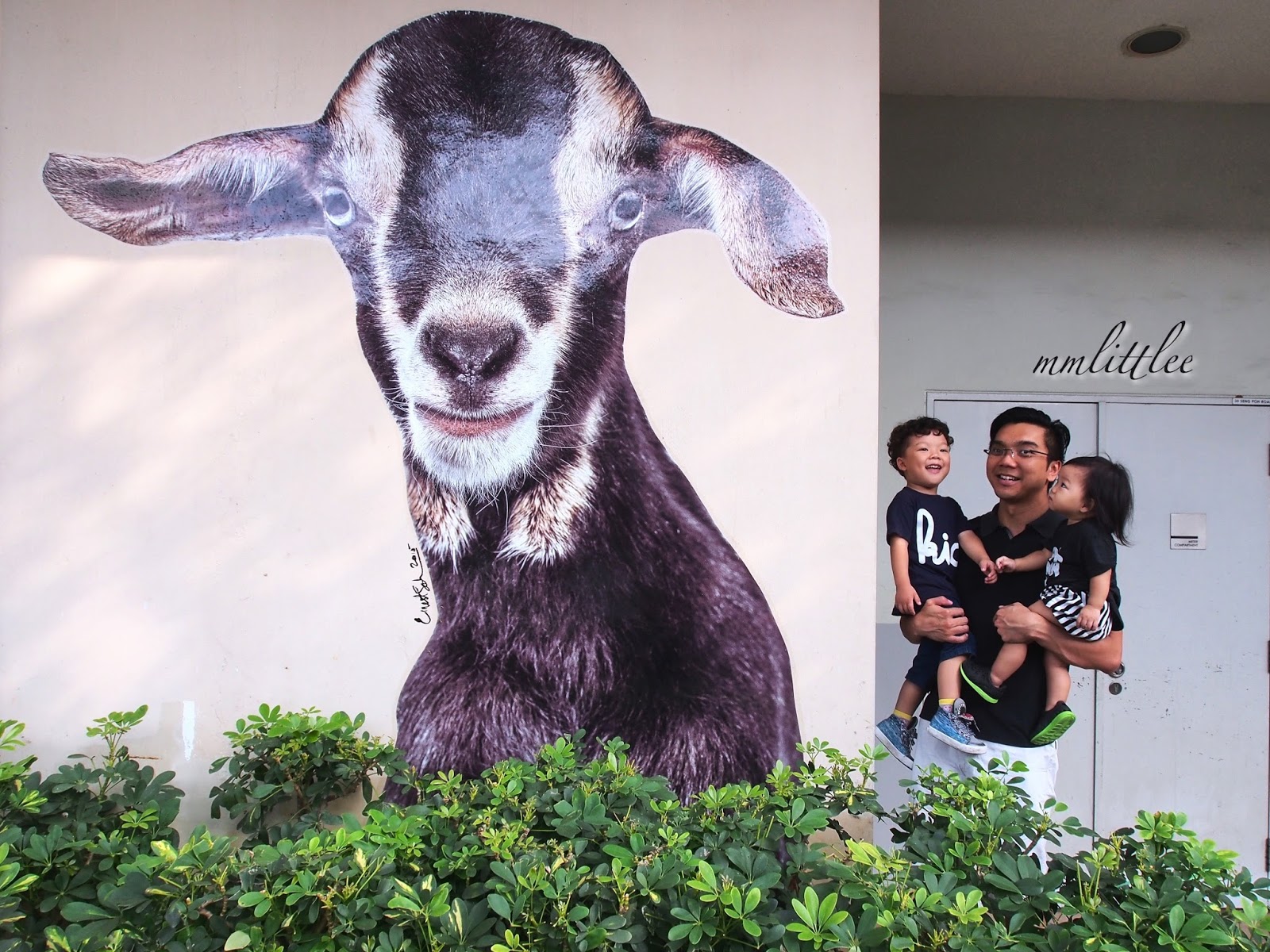 What a way to document the Year of the Goat with Goat murals in our favourite neighbourhood! When you do pay them a visit (including the Goldfish since you will be in the area), remember to hashtag #ernestgohanimalwall and #tiongbahru just so we can help keep them in file! 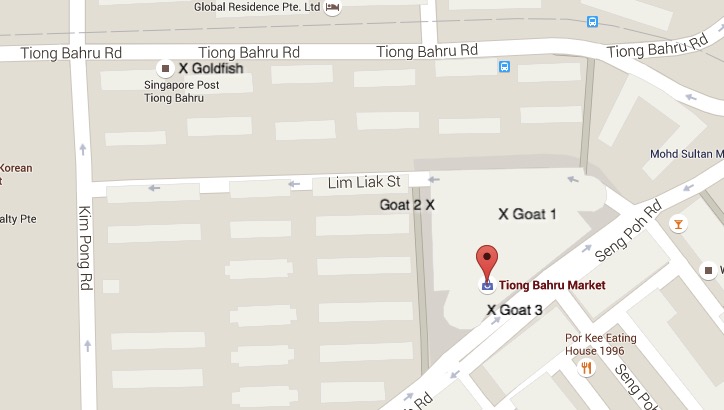