Skip to main content
Labels
Posted by May August 31, 2015

It was a girlfriend who notified me of these murals in Banda Street. She volunteers at Kreta Ayer Seniors Activity Centre and had first-hand news of these street art when it was freshly officiated in April 2015. I wasn't quite motivated to do this series because we didn't have the right outfits for the children to go on this mural hunt. With the newly launched SG50 Coolie and Samsui Woman costumes by Children's Costume Specialist (purchased, not rented), we spent an hour around Chinatown yesterday and located some really amazing artwork to call our own!

This is a project spearheaded by Pricewaterhouse Coopers to celebrate the lives and places of our pioneer residents through heritage murals. These murals were painted by over 500 PwC Singapore staff volunteers over a period of six months and took 1,000-off man-hours to complete! They are made up of scenes from Singapore's past and present. Such images seek to enable the elderly residents to look back and reminisce about their younger days as well as to remind young Singaporeans on how far we've come as a growing nation. As we walked about with our little Coolie and Samsui Woman in Chinatown yesterday, the old folks were smiling and chattering away at our walking accessories.

So much effort were put into creating a vibrant neighbourhood - one that we Singaporeans can be so proud of. Yet in less than half a year, we see provision shops blocking the murals with their storages and workers lining the walls with their tools. It is, to me, a form of vandalism and utter disrespect to art. Let us hope that the Tanjong Pagar Town Council can find a solution to this.

As you wander and wonder, you will find wall plaques explaining the story behind each mural.  Welcome To Our World, Back Lane, Bridge Over Calm Waters, The Cool Dude and Our Past, Present and Future are all located at Block 4 and 5 of Banda Street. See map below. 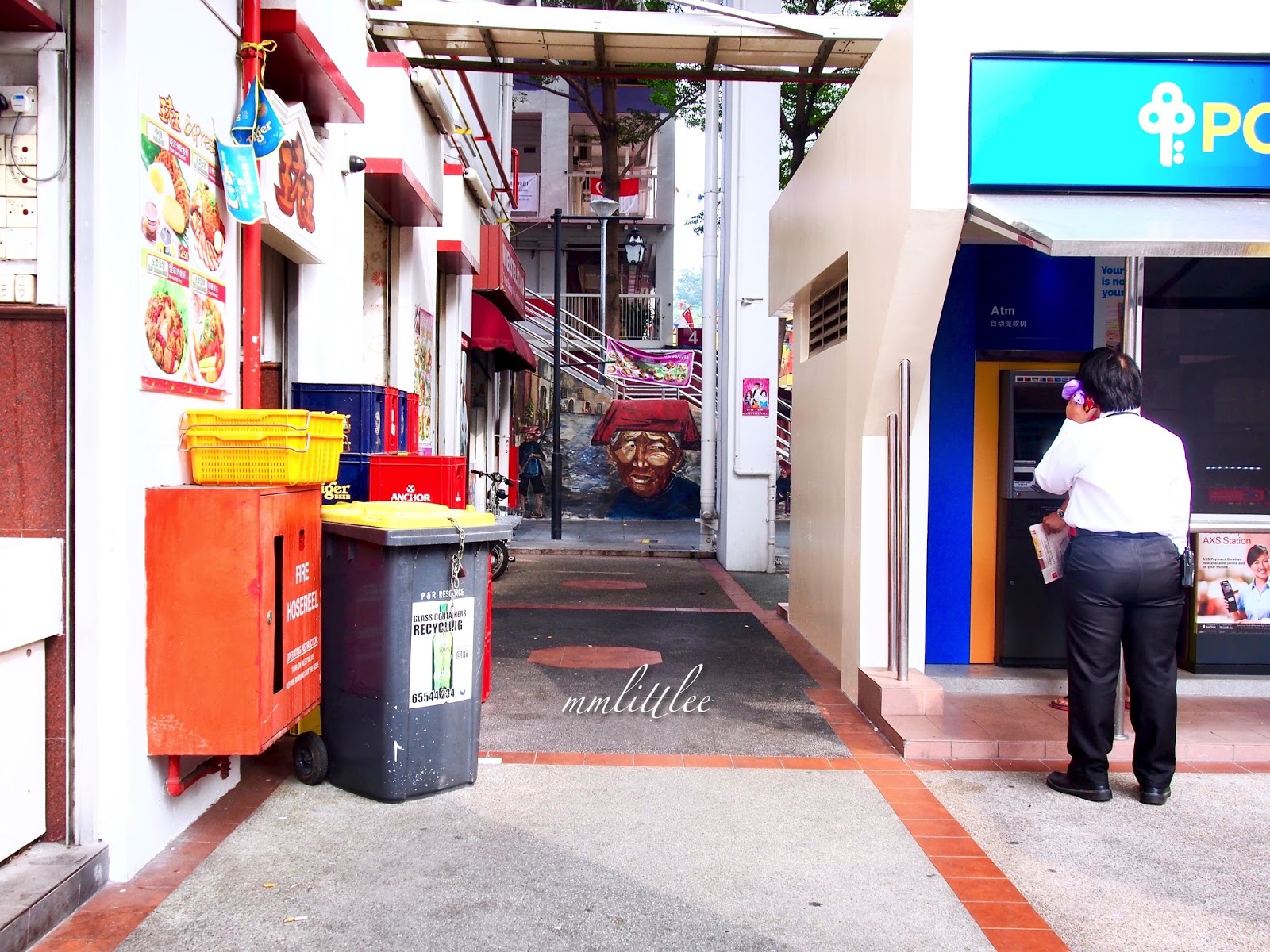 Welcome To Our World - The Samsui Women (also known as 红头巾) are the heroines of our past. They came from China between 1934 to 1938 to work as cheap labourers, contributing to Singapore's early development in construction and building. Their red headdress was a square piece of cloth starched stiff and folded into a square-shaped hat which naturally became their trademark feature. The colour red was used because it was eye-catching to reduce the chances of accidents at the construction sites. Besides sheltering from the sun, it was also used to store items such as cigarettes, matches and money. Faye's 红头巾 is hilariously large but it made her look so adorable.

The Aranda Lee Kuan Yew and Vanda Kwa Geok Choo orchids are also illustrated here in remembrance of the country's founding father Mr Lee Kwan Yew and his wife, Mdm Kwa Geok Choo (who passed away in 2015 and 2010 respectively). Can you spot them? 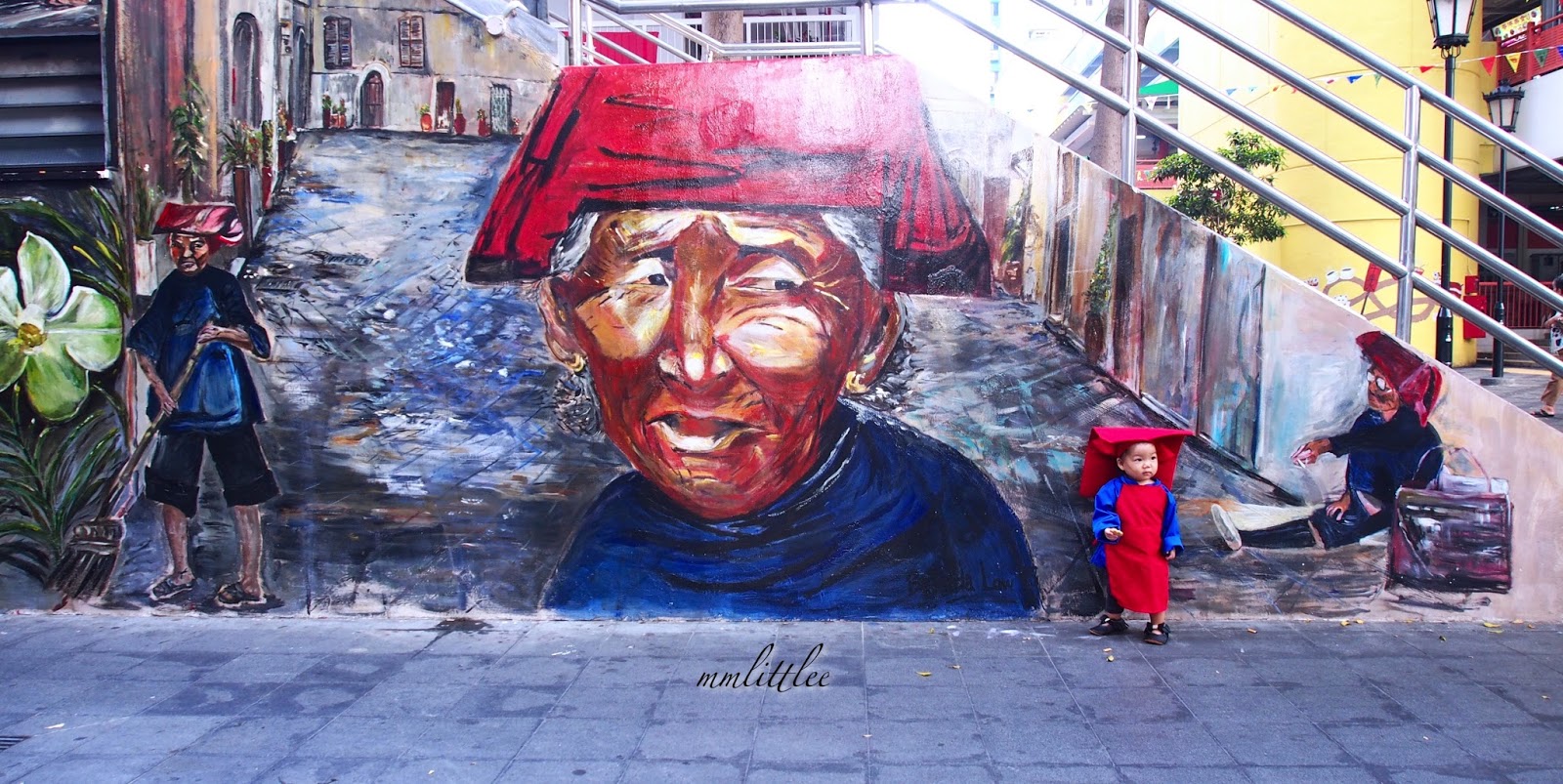 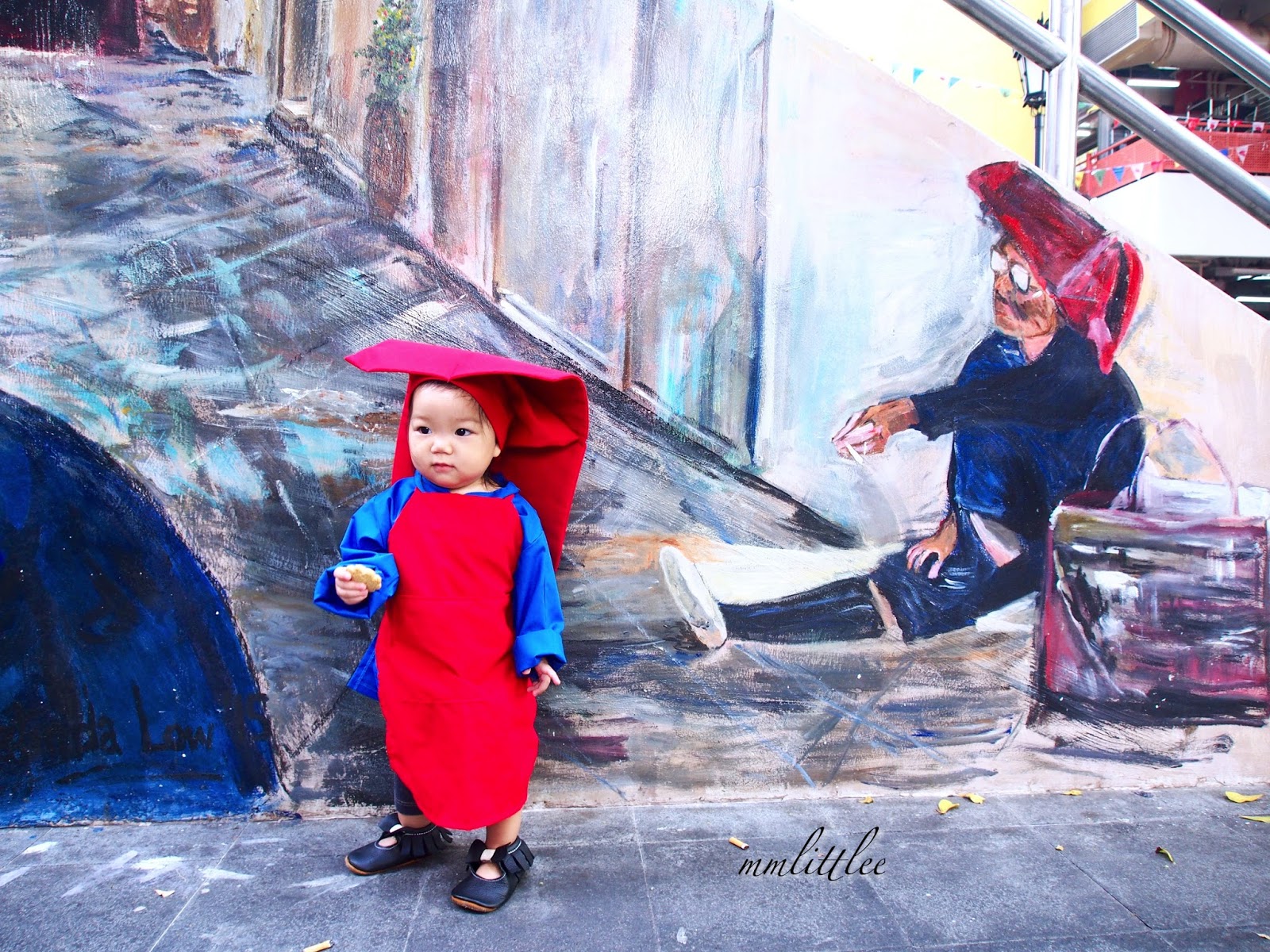 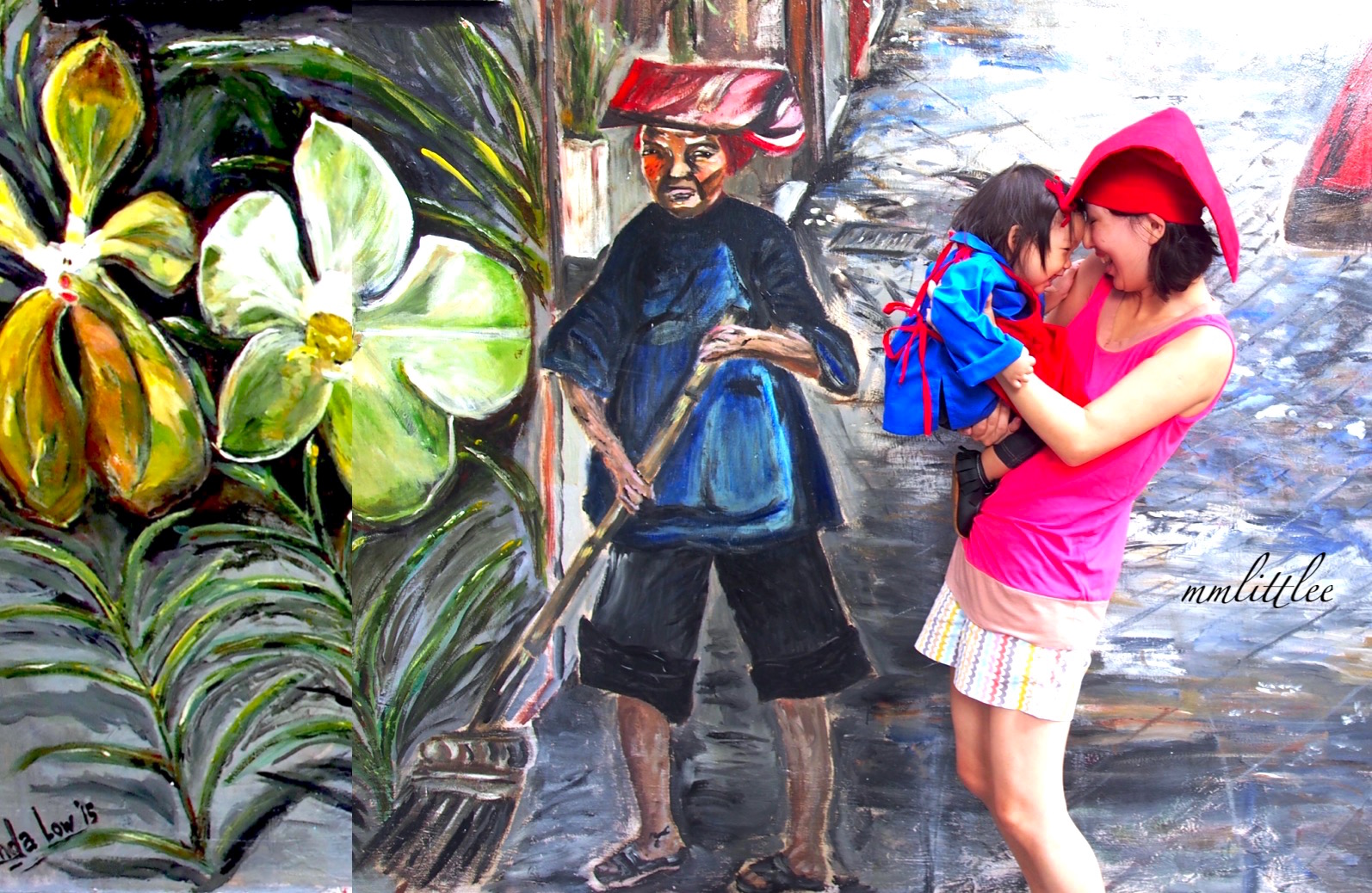 Behind the Samsui Woman Welcome To Our World mural on the stairway, you will find two full-length art pieces perpendicular to each other that has sadly turned into a storage space by inconsiderate shop owners. I was looking forward to appreciating this particular mural because it brings us back to the rich and colourful years of Singapore where children play along five foot ways.

Back Lane depicts a grandmother and her grandchildren standing outside their house where she is seen pasting a red piece of paper with the word "fu" (which means "good luck" in Mandarin) on the wall her young ones look on earnest. This is a tradition in many Chinese households even up till today. The grandfather playing the er-hu (a Chinese instrument) next to them watches on happily as his family prepares for New Year'. I've got my little coolie Ewan squatting on a table that's not supposed to be there, hoping to somehow catch a bit of its story. 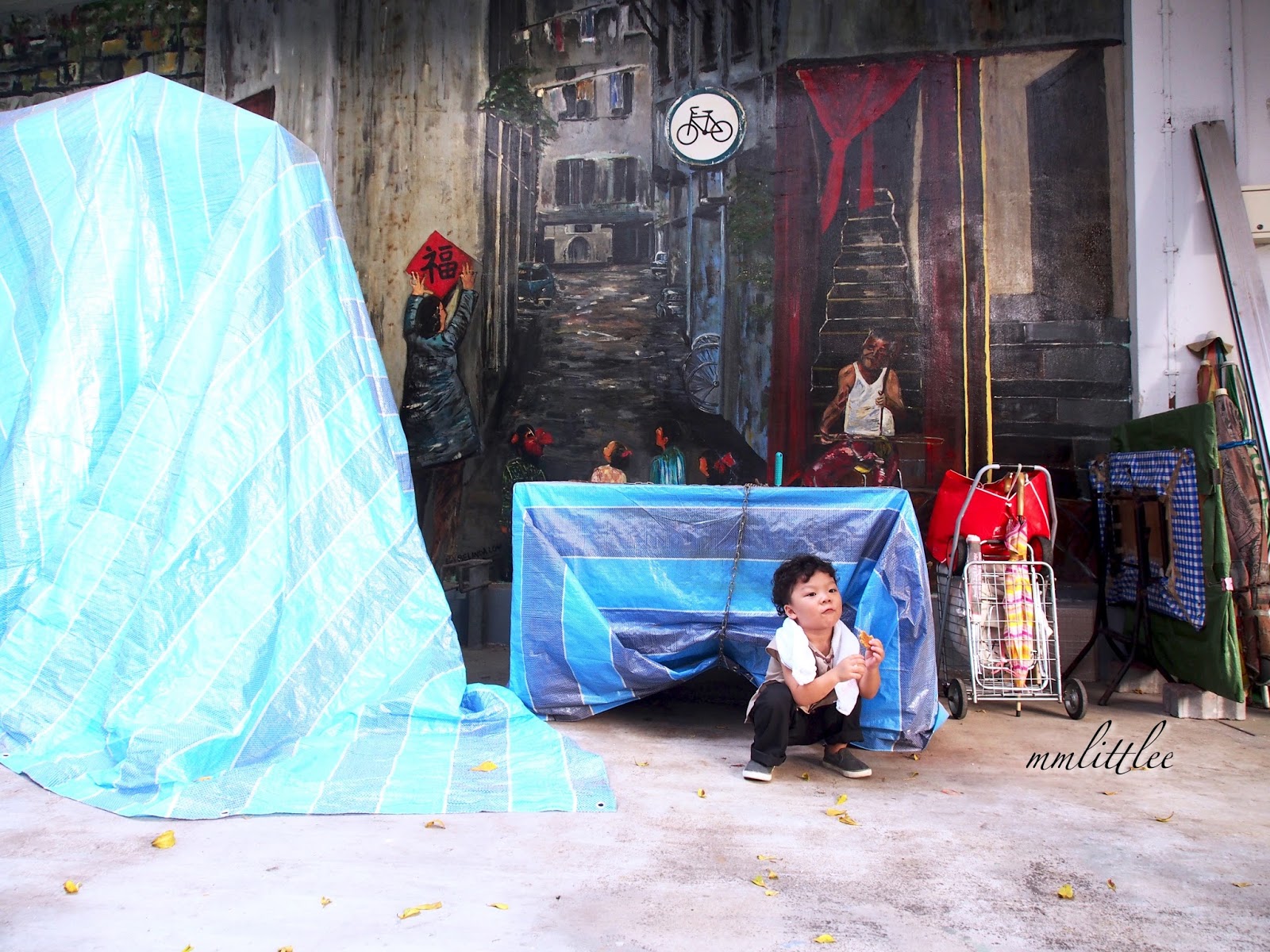 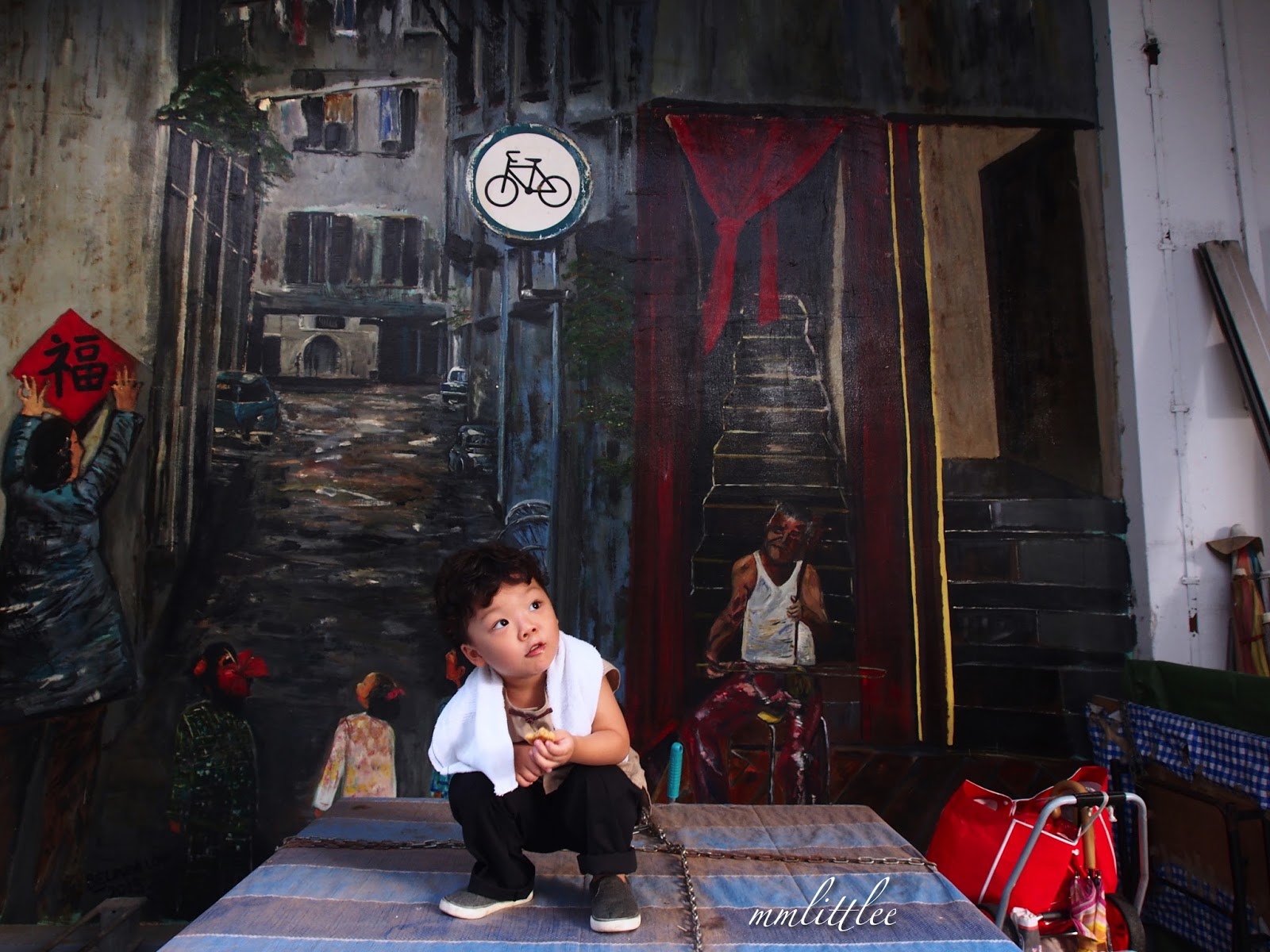 Bridge Over Calm Waters is the mural perpendicular to the Back Lane. Thankfully this wasn't blocked. This is painted in honour of those who have remained calm and resilient through tough times and hardships of life. A turtle is depicted to symbolise longevity and nine koi fish to symbolise prosperity, The number nine in Chinese belief signifies 'permanence'. They've painted this on a wall with bicycle racks. Coincidentally, Ewan had his training bike with him to join in the picture. Our Samsui girl decided to be alongside her brother and our hopes that they will grow old together with a bond that stays strong for one another. 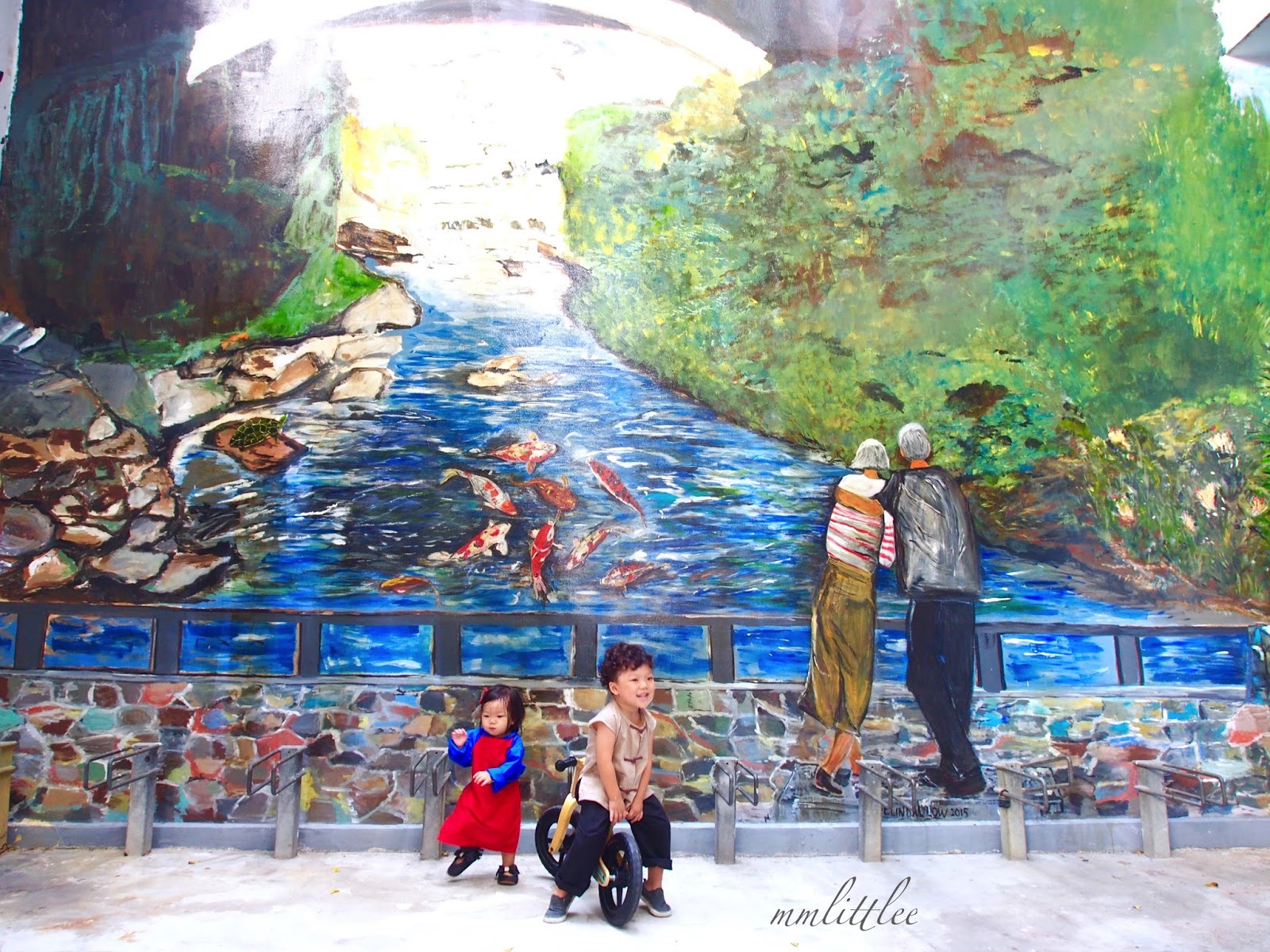 While we were there, we couldn't find The Cool Dude. It should be in the same area but we must have missed it somehow. Looking at this picture, I reckon this must be on a higher level. This cool dude is a coolie. A term for an unskilled labourer during the 19th and 20th century. They were mainly from southern China or the Indian subcontinent, and formed the early backbone of Singapore's labour force. These impoverished immigrants came to Singapore seeking a better life but served instead as indentured, unskilled labourers. They were employed in almost every sector of work including construction work, plantation work, in ports and mines and as rickshaw pullers. They were as resilient as Samsui women and generated growth for Singapore's economy in the past. Do share with us if you found it!

Our Past, Present And Future is sadly lined with metal shafts and ladders. We could hardly get a good shot here and totally disappointed by it. Samui woman and Skylines are the reflections of Our Past, Present & Future. The juxtaposition of the past with the present brings to bear the relevance of the spirit of tenacity embodies by the Samsui women that will lead Singapore into a better place. 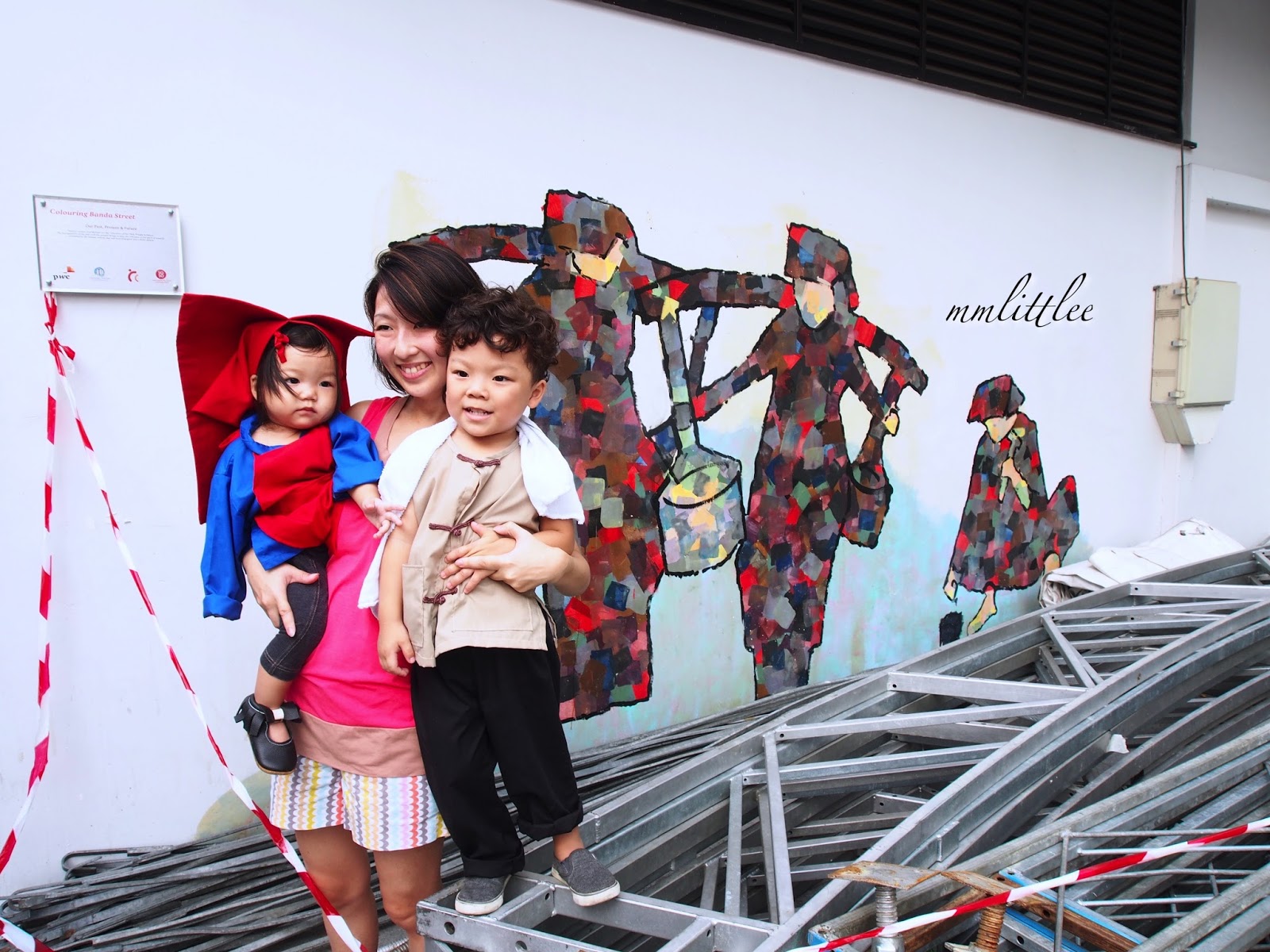 Moving on to Block 333 Kreta Ayer Road, you will find a whole area of murals lining the walls of a large staircase heading up to the Community Centre. 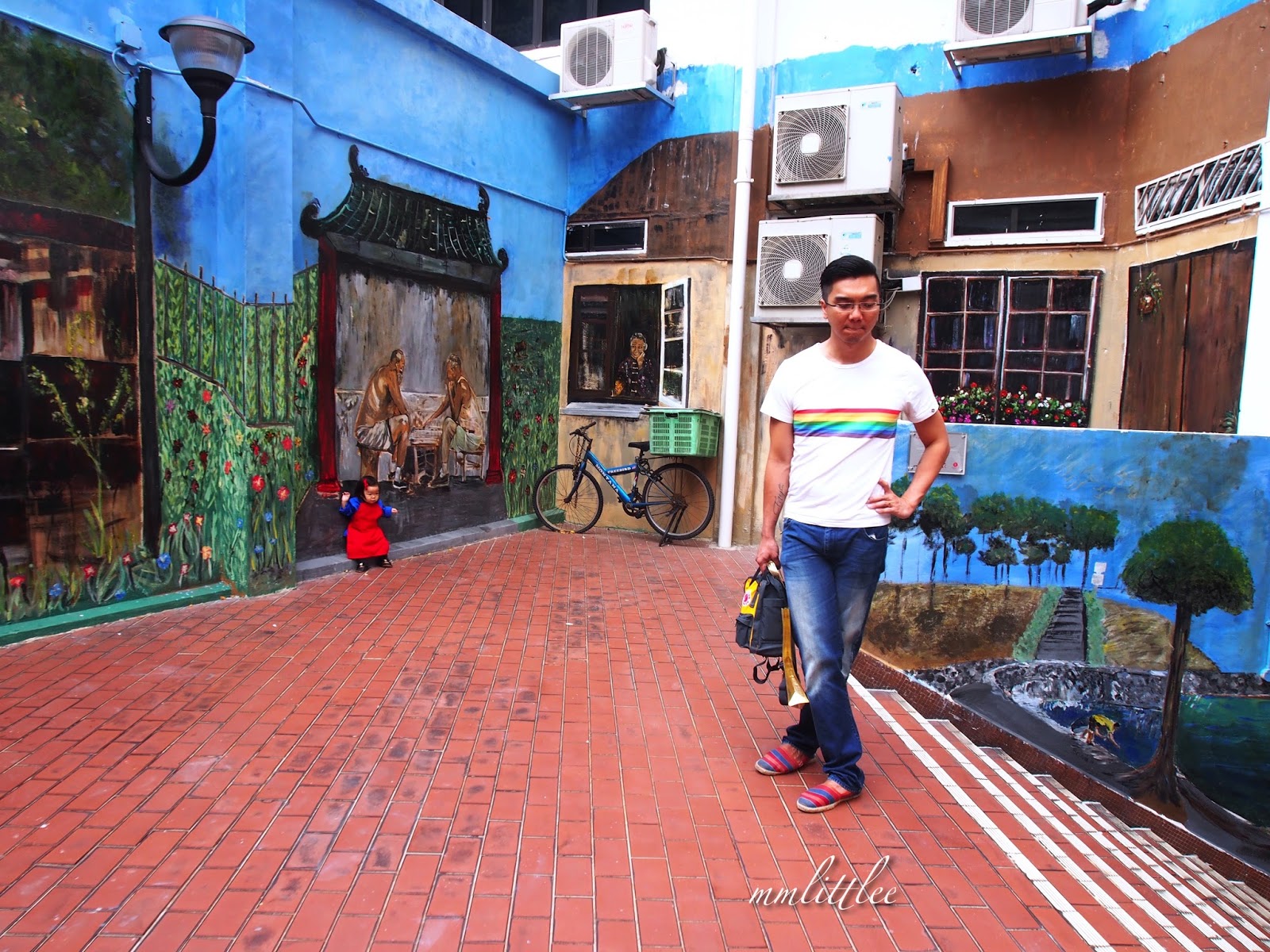 Faye learning Tai Chi Chuan from this Tai Chi Uncle (actually, she was asking me for a gummy bear)! Tai Chi Chuan, or 'Supreme Ultimate Force' when translated from Chinese is the main exercise for the elderly in Singapore. This old gentleman beneath the tree in the shade is keeping himself busy and fit by ding what he does best in the mornings.- Tai Chi. He can be a 'part of them' and serve as a daily reminder to the elderly folk to keep their precise regime going for as long as possible. 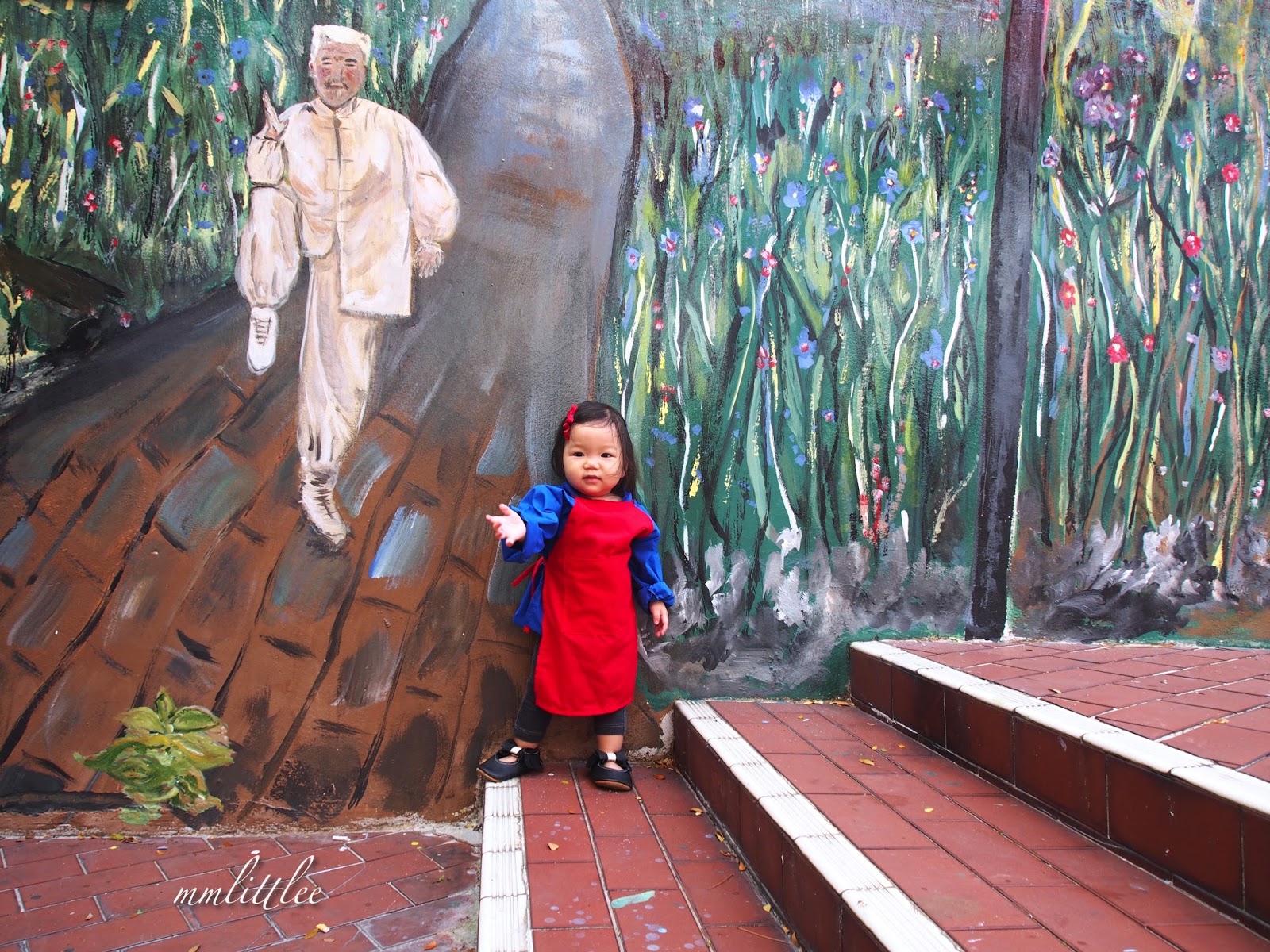 Here's Ewan cycling on The Path To Peace And Serenity. The main concept behind this mural is to grow old gracefully and stay active while still being close to nature. A picturesque countryside kampong scene is depicted with flowers along both sides of a winding path. It leads to a waterfall in the distance and has a guesthouse for travellers to rest at night after a long day's journey. The next scene portrays two cyclists peddling through the lanes to another village. As cows (not in photo but seen in the one below) roaming freely were a common sight in the past, the street was therefore named 'Buffalo Street'. Two cows are painted to relive this memory along with that of the Indian milkman with his cow journeying the village streets each morning. 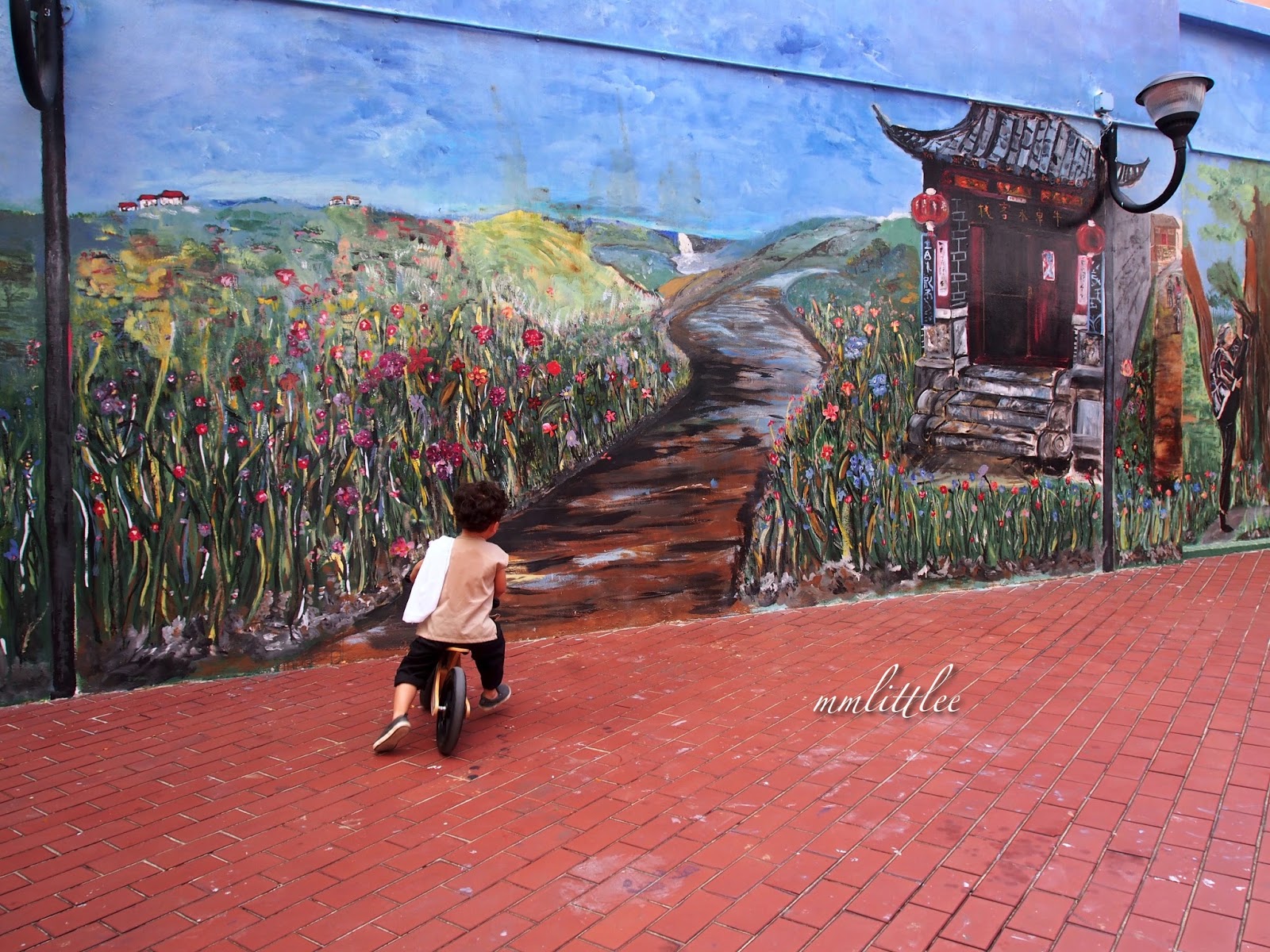 The Way We Were. The large tree on the right is a durian tree and sugar canes grow abundantly at the front of the house. As such housing factitious no longer exist, this depicts how people used to live and what Singapore looked like in the past. It also serves a a message to the generation to continue working hard and reminding ourselves of how far we've come. 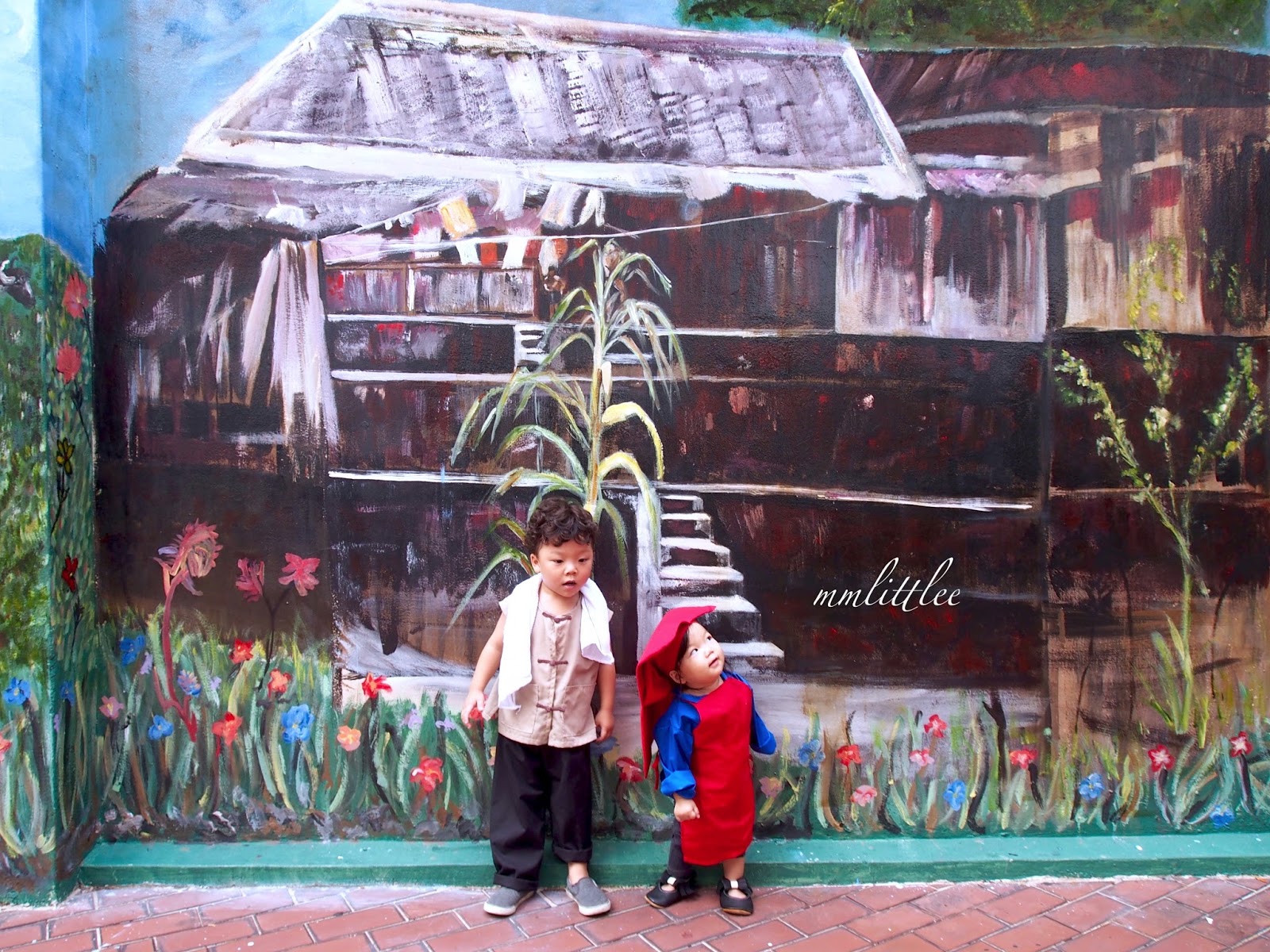 Aging Gracefully. As the saying goes, health is wealth. With an increasing ageing population, active ageing is the new way of life. An elderly woman exercising is painted to showcase the older generation partaking in various social/physical activities. So will we be instilling physical exercise in our children's daily lives! 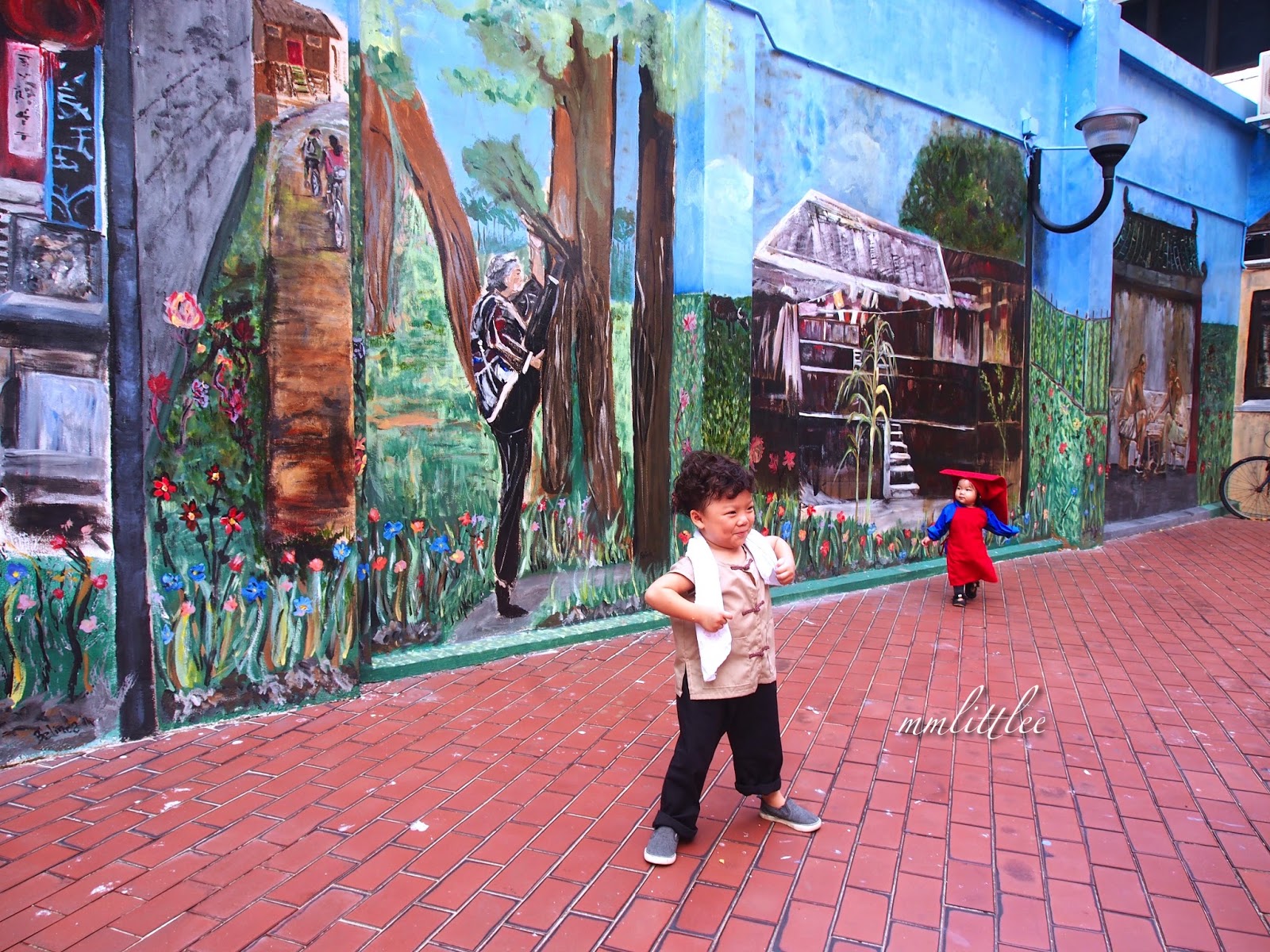 Chess Mates. Playing Chinese chess is another common past time especially amongst the male community. A common sight even until today, it is a game which enjoyed by all and transcends age, race and culture. It fosters friendship and stimulates the mind as well. I hope my little younglings will grow up to not only be chess mates but best mates! 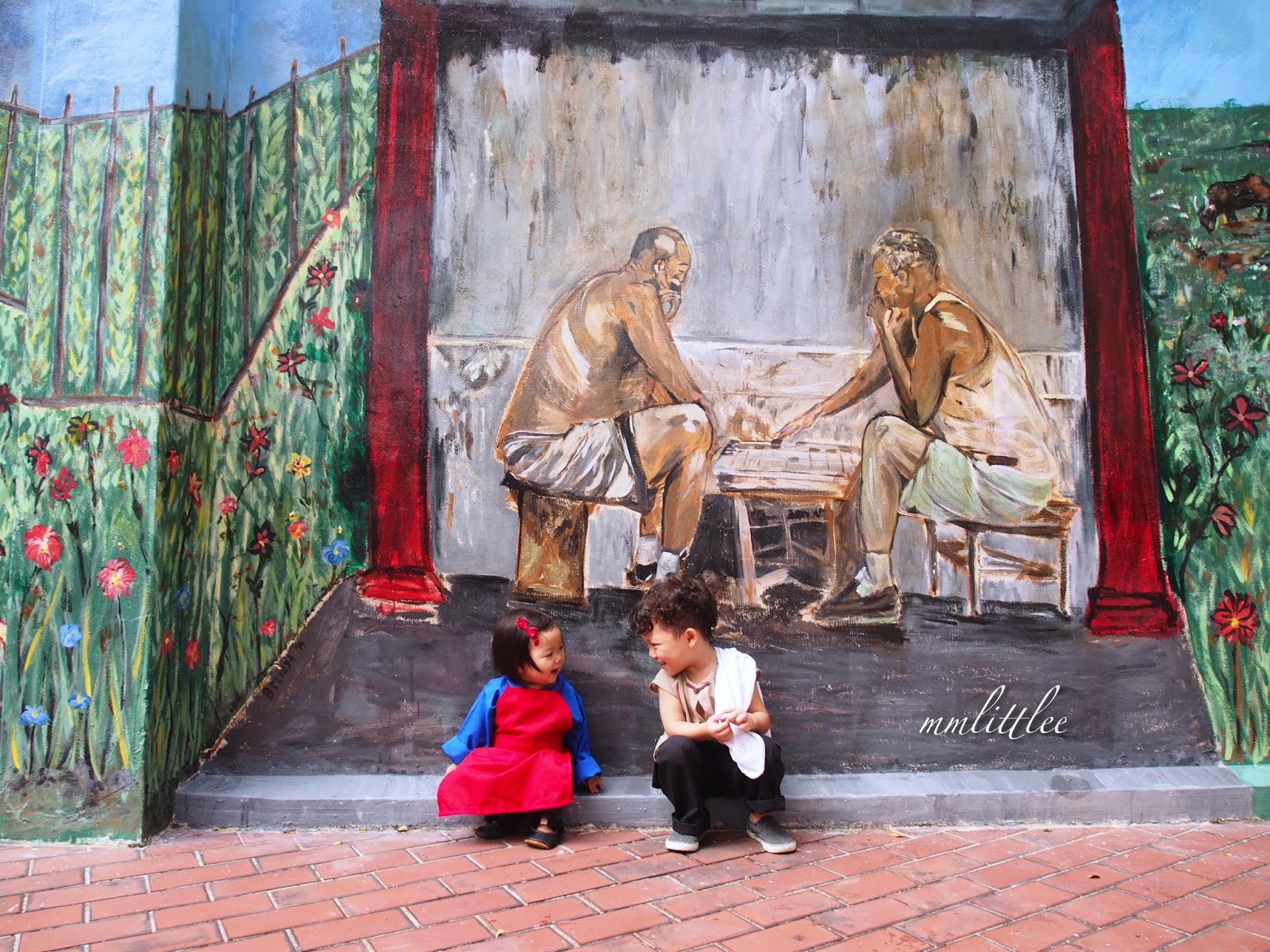 Right next to this wall, you will find Grandma and I. Actual small windows and air-conditioners sit on this wall panel at the extreme far end. Instead of painting over it, a scene of single house with a large window overlooking the street below is depicted. In this window, there sits a grandma peering out. Beside her is a curious six-year-old girl peeking out and wondering what her grandma is looking at. Whether she is looking at her husband playing chess below, or whether she is just taking rest and resigned to her fate of being a domesticated wife is left to the viewer's imagination. 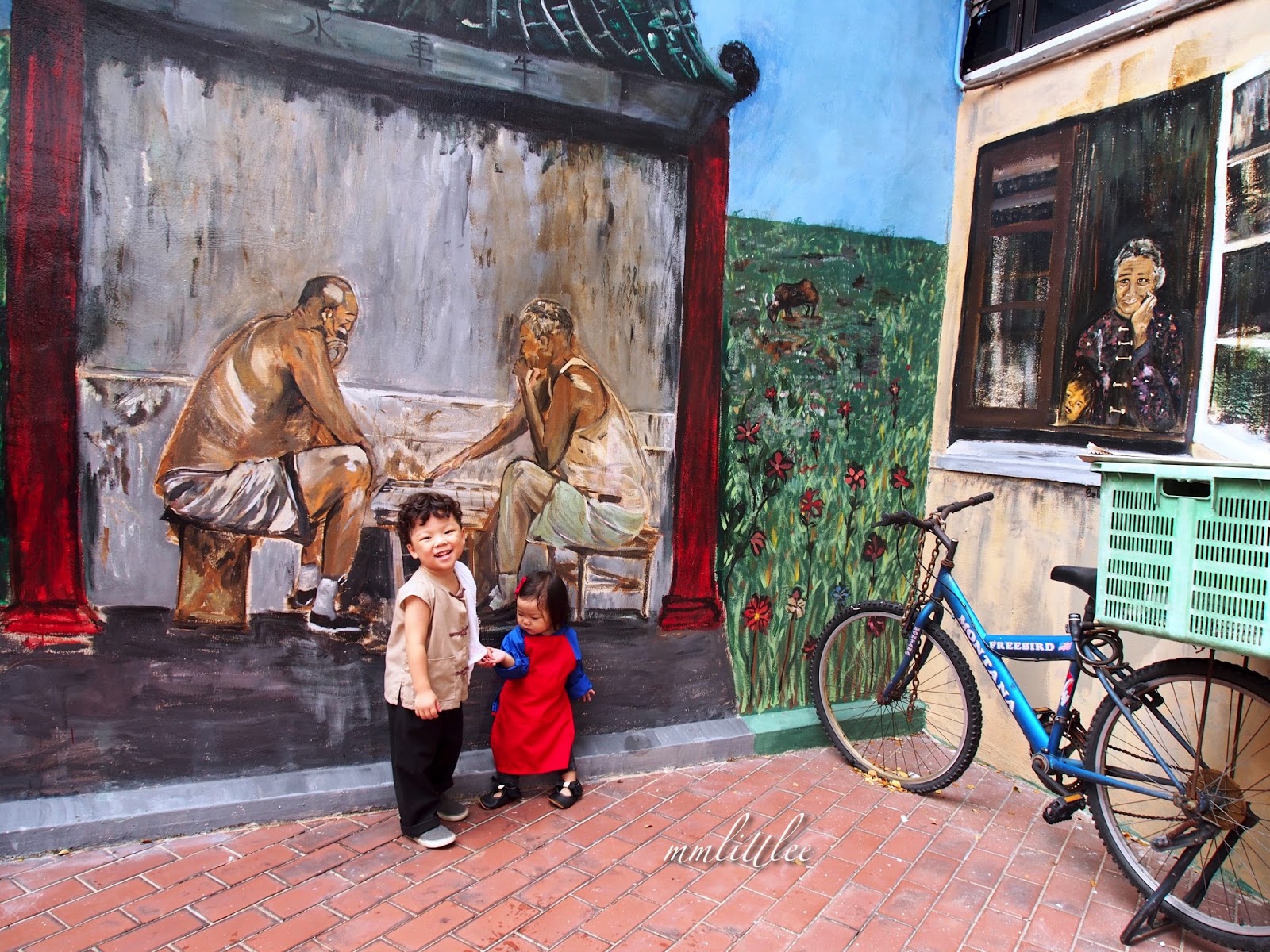 There are a lot more murals and street art in the area that you might like to stop to admire. Enjoy the hunt and follow my suggested route to catch all of the above mentioned murals depicted by red stars! I am proposing to start and end in the order of this post's sharing. Parking at the open space carpark next to the Buddha Tooth Relic Temple is at $1 per half hour and you may reach there via Kreta Ayer Road entrance. Alternatively, the train is just round the corner in Chinatown! 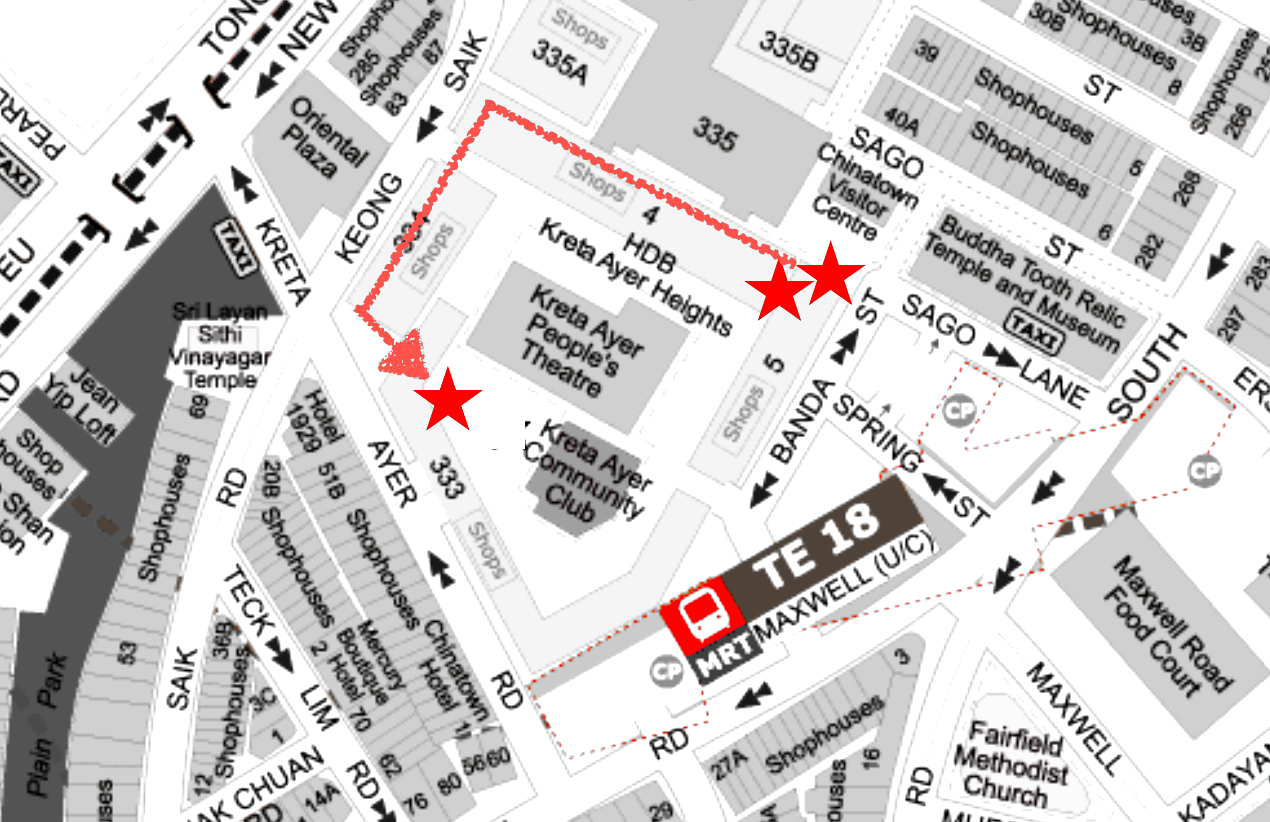 On Memory Lane: Plaza Singapura
.
Year of the Rooster with Ernest Goh
.
The Tiong Bahru Murals
.
The Everton Murals
.
Raffles Hotel X Carlo Marchiori
.
Where Are The Goats?
.
Street Art of George Town
A stay at home mum, blogging to widen her social life.
We want to echo the sound of love through our lives to inspire other mothers alike.
Email Post
Labels: 13-24m 3yo Chinatown Ewan Faye Mural Photography photoshoot Street Art