There were only two reasons to choosing Penang as my holiday destination.

Coincidentally, the Eastern & Oriental Hotel sits on the same side of the map where street art helms. How fitting! I am a heritage junkie mommy. To live and soak in the flavour of historical sites puts me in seventh heaven. I googled for activities that the children can participate in and they pointed me to indoor and outdoor playgrounds, animal farms and interactive museums. Unfortunately, they were either too ordinary (as if we do not indoor playgrounds in Singapore) or inappropriately aged for my children. A baby and a toddler wouldn't be able to handle obstacle courses at Escape even though I'd very much like us to go for it.

The children did not protest against our travel itinerary of temple and art tours because well, they are still too young to complain. Our main advantage at this age is, they are happy as long as we are around. It doesn't quite matter what we were doing. So Yay! Mommy got to experience Penang the way she wanted!

The beauty of Penang lies in its traditions and old world charm. Five-foot walkways, clan houses, Jetty homes and colonial buildings. These are the reasons that led George Town into being accorded a listing as a UNESCO World Cultural Heritage Site. All of which I wished we had retained more of in modernized Singapore.

I researched intensively for my street art hunt and was determined to track them down. Not all, just those that appealed to me from the likes of Ernest Zacharevic to Loius Gan. Ernest's murals had been commissioned by Penang's municipal council, turning certain areas into thriving tourist destinations. I must say it was a very successful initiative because they got people like me booking tickets to Penang!

THE AWAITING TRISHAW PEDDLER
We can see him in the distance from our hotel. This is Ernest Zacharevic's largest mural painted in George Town. It graces the wall that faces the Red Garden Food Paradise car park, depicting an elderly trishaw paddler sitting in his vehicle, probably waiting for customers. It is a fitting tribute to the trishaw paddlers who congregate at the trishaw station across the street. 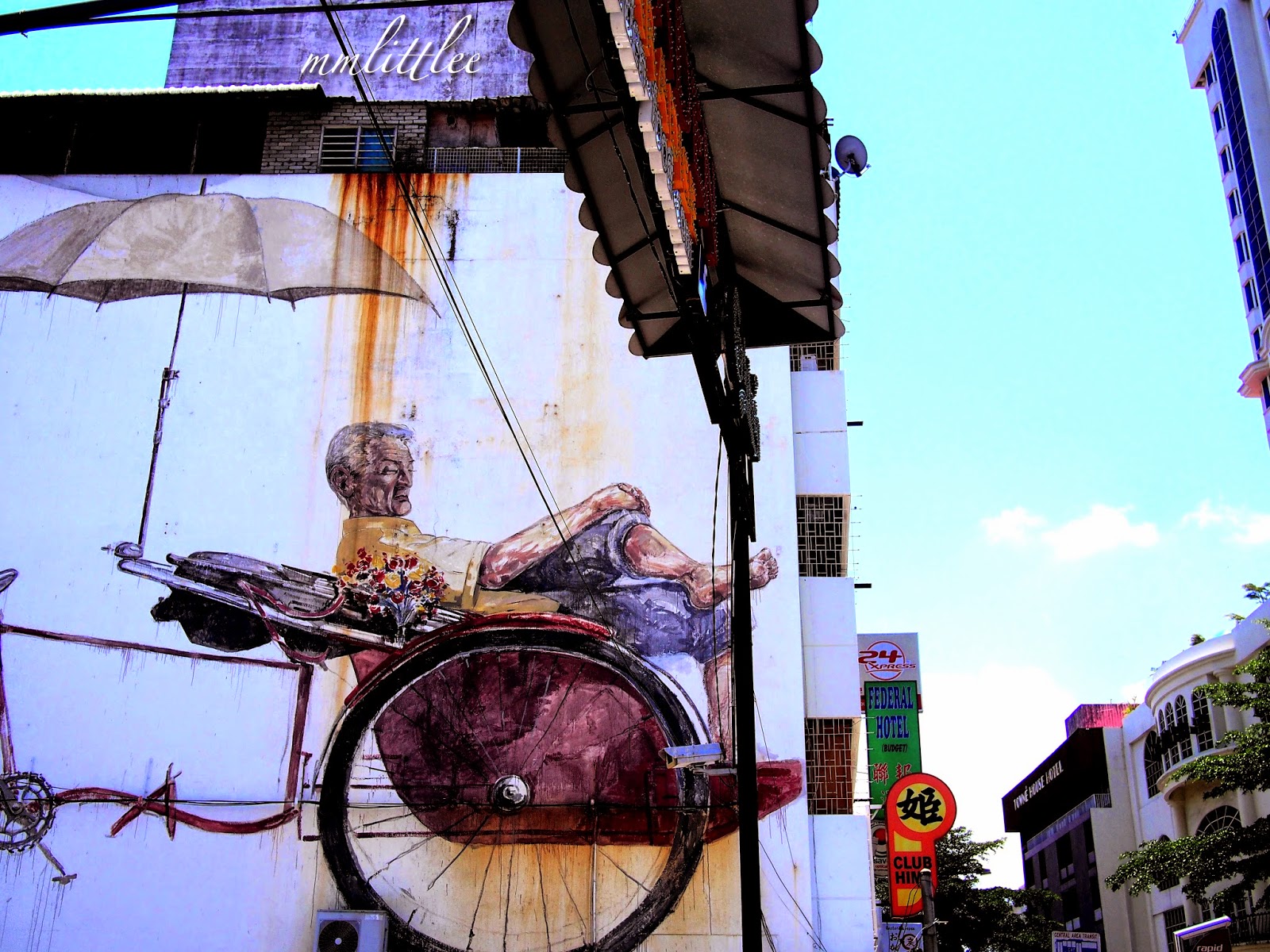 PAU SELLER
A short walk from the trishaw peddler will bring you to an elderly pau seller. He sells red bean paste and char siew pau at 40c and 20c respectively. This mural celebrates a boutique hotel occupying Great Shanghai Dry Cleaning. Called Will House, the accommodation provider occupies 50 and 52 Leith Street. 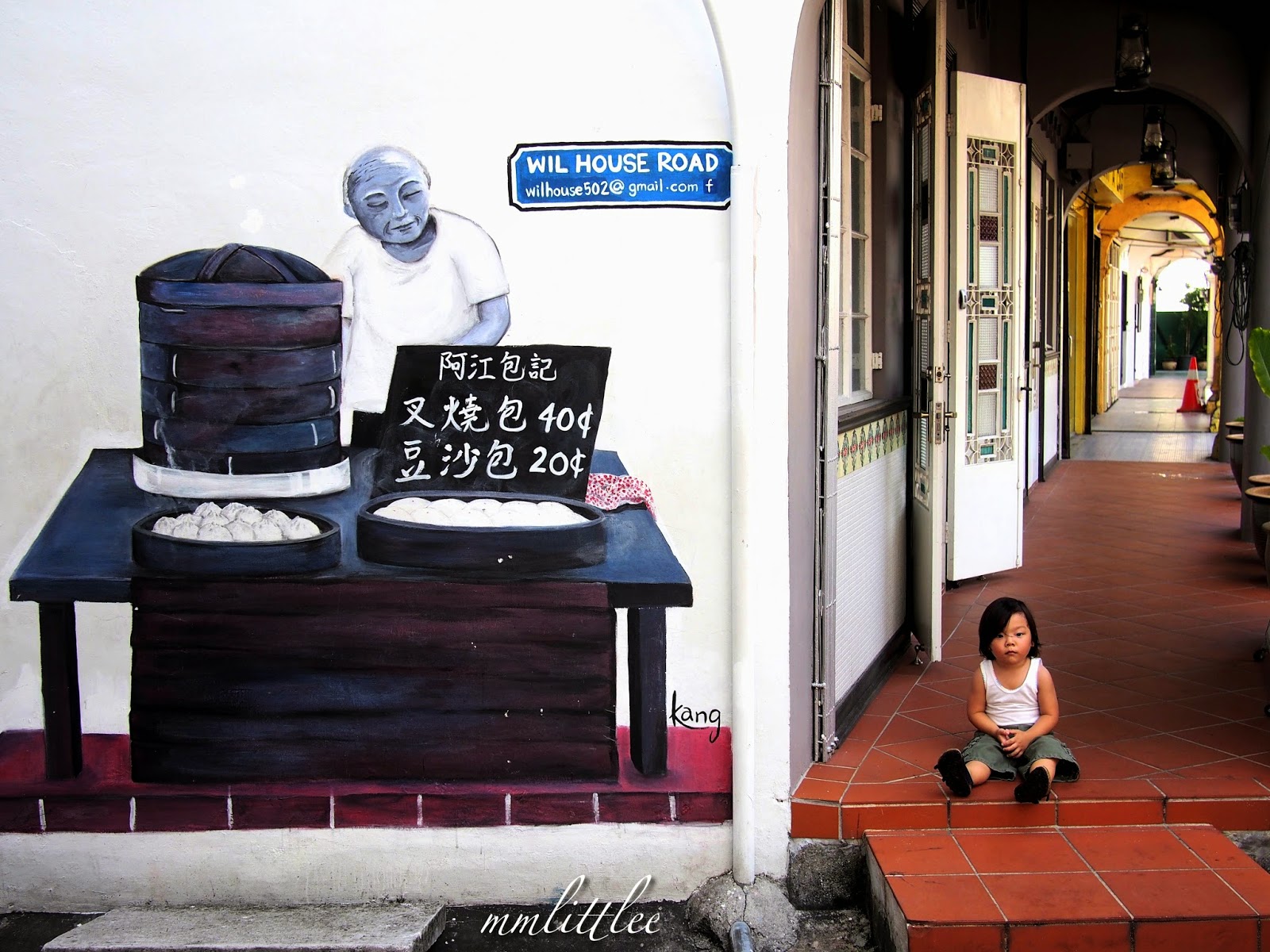 BROTHER AND SISTER ON A SWING
This is a mural by a local deaf-mute artist Louis Gan. It is my favourite piece of art depicting two young children standing on a swing. The proprietor of the printing firm, SBS Paper Products, invited Louis to paint his children on the wall of their printing warehouse. It celebrates the intimacy of sibling relationships. The swings are a little shallow for bigger bottoms so standing on it can be your winning plan!

Address: In an alleyway off Gat Lebuh Chulia 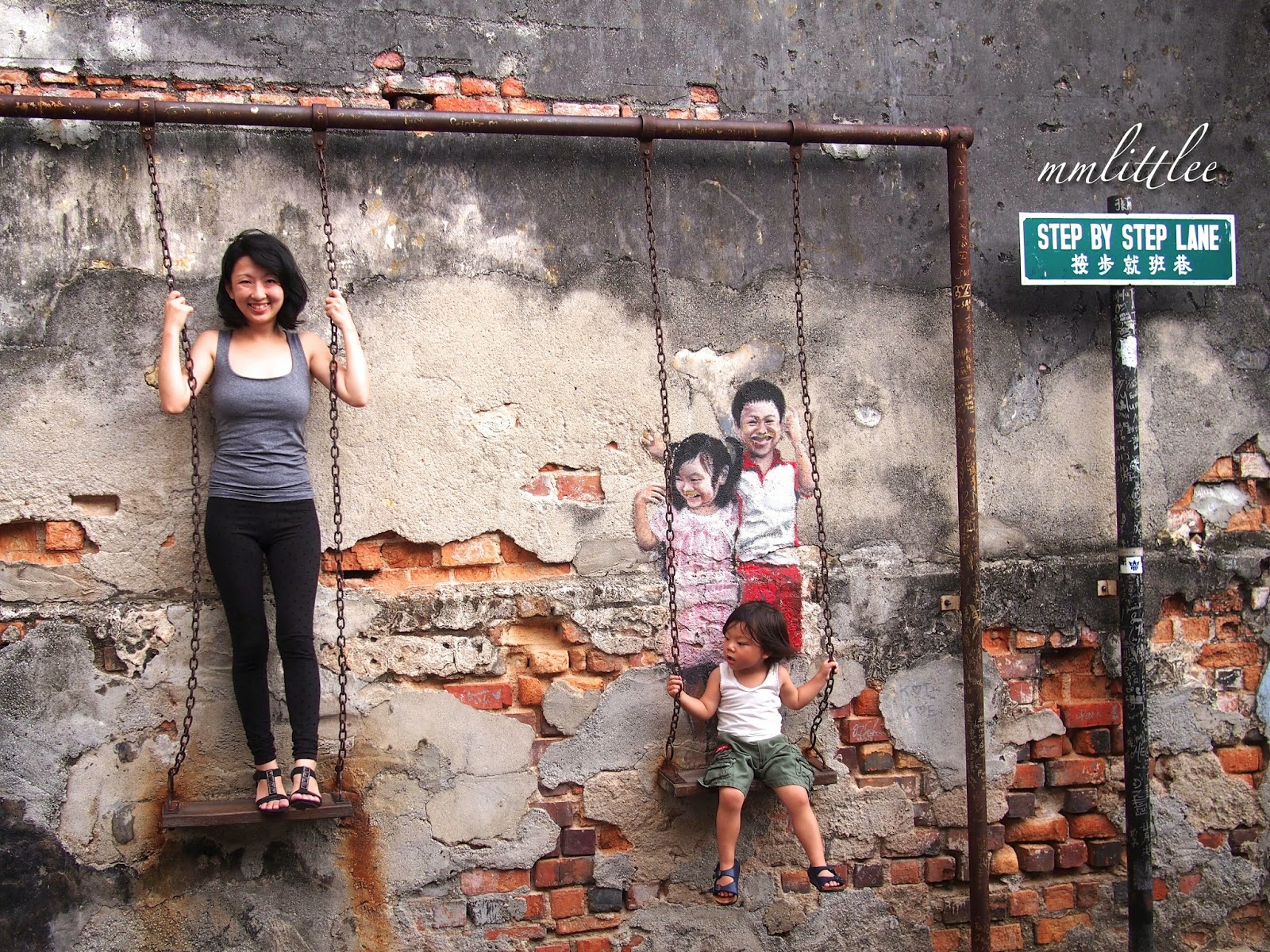 CHILDREN PLAYING BASKETBALL
After visiting the Brother and Sister on a Swing, walk straight into the opposite alley to enjoy Louis' second mural. It was around the time that "Children Playing Basketball" was completed that the artist found himself embroiled in a controversy, being accused of not using heritage-friendly paint and for painting walls without approval from the authorities (even though he was invited to paint the wall by its owner). There were also callous remarks posted on Facebook which deeply affected the young artist. (It is so ironic that on one hand, people say local artists don't get enough support, but when a promising local artist comes around, the people criticize him mercilessly.)

Address: In an alleyway off Gat Lebuh Chulia 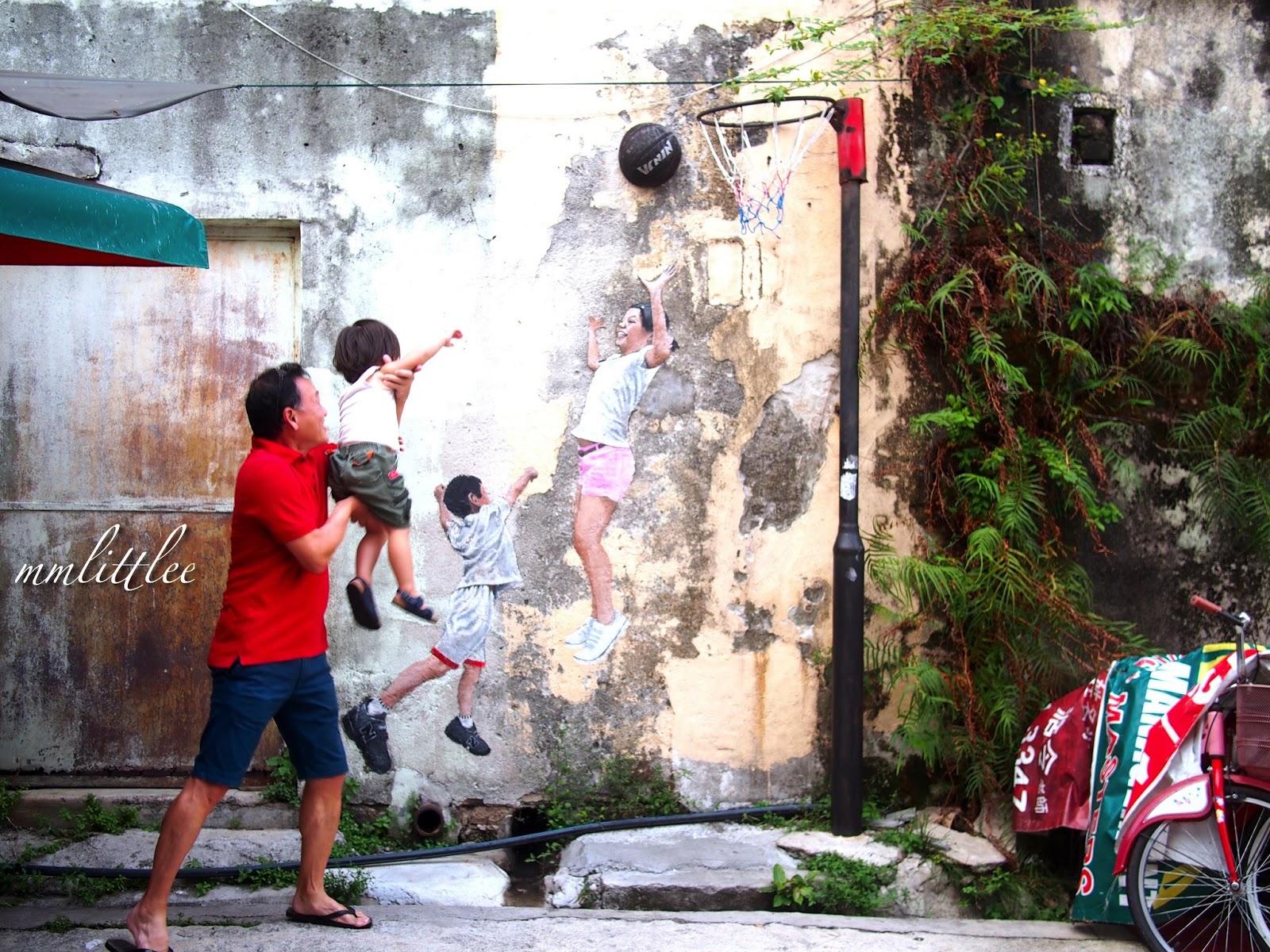 I WANT PAU
Drawn by WK Setor, he was asked to do up this mural by the owner of the biscuit shop, Ming Xiang Tai Pastry Shop. He named this mural 哥妹俩的童年回忆 or Childhood in English. It shows two children stretching their hands from inside a window towards a parked bicycle carrying a stack of rattan stays, possibly laden with steamed buns. It acts as an artistic billboard for the business within. I must say their pastries are really quite tasty. Oooo as I write, I am yearning for some of its pastries now. 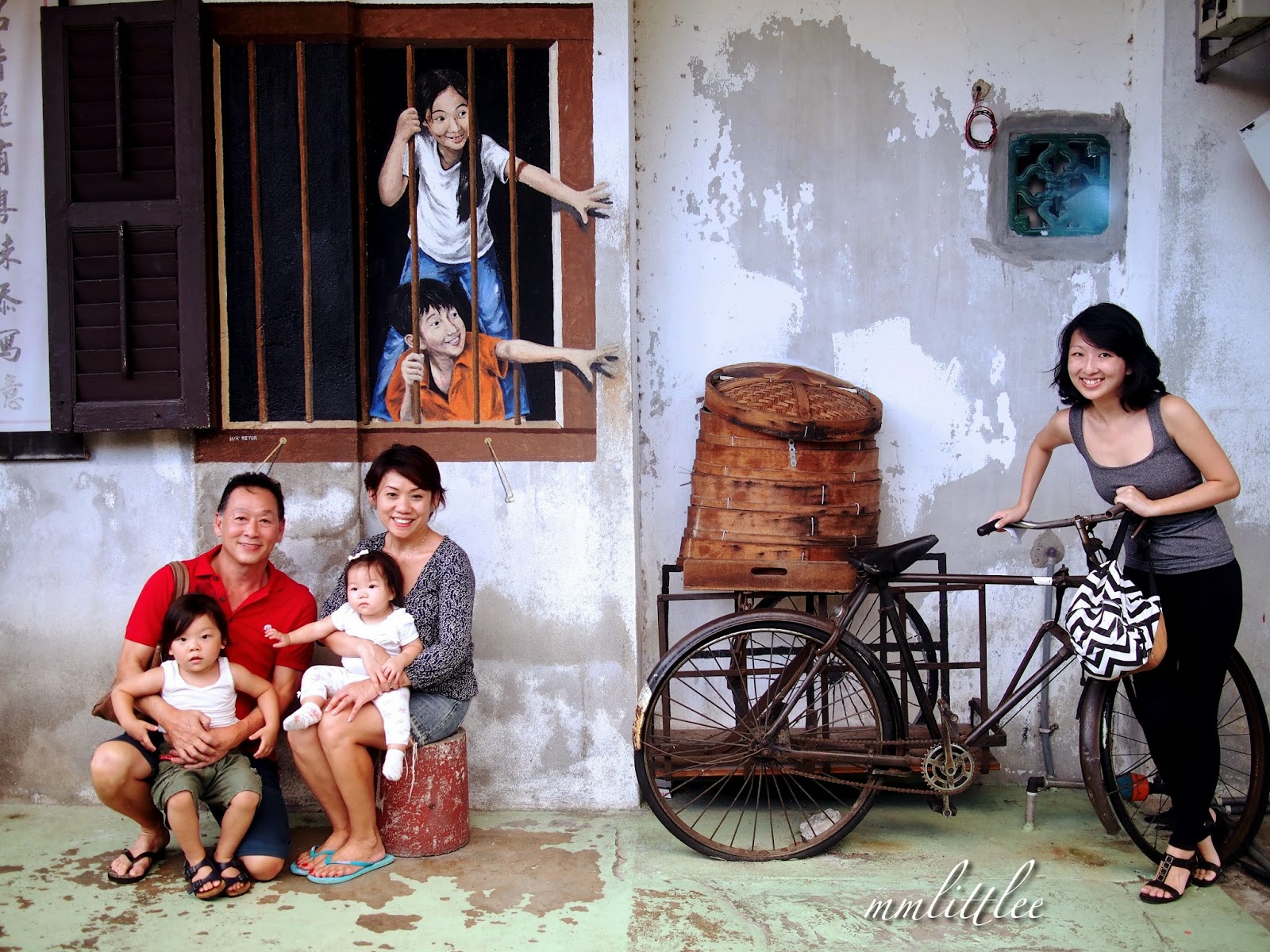 BOY ON A BIKE
By the time we arrived at this mural, it was already getting dark. You'd be surprised to find spotlights shining onto its wall for tourists to continue their photo hunt late into the night. Truthfully, I do not know if there are suitable lightings at every mural but there at "Boy on a Bike", there was. Painted on the sidedoor of a shophouse, it shows a boy hanging out on his motorcycle as he watches the pedestrian traffic passes by along the street. The mural is immediately to the right of another Zacharevic piece, "Little Boy with Pet Dinosaur", which has sadly faded away with time. 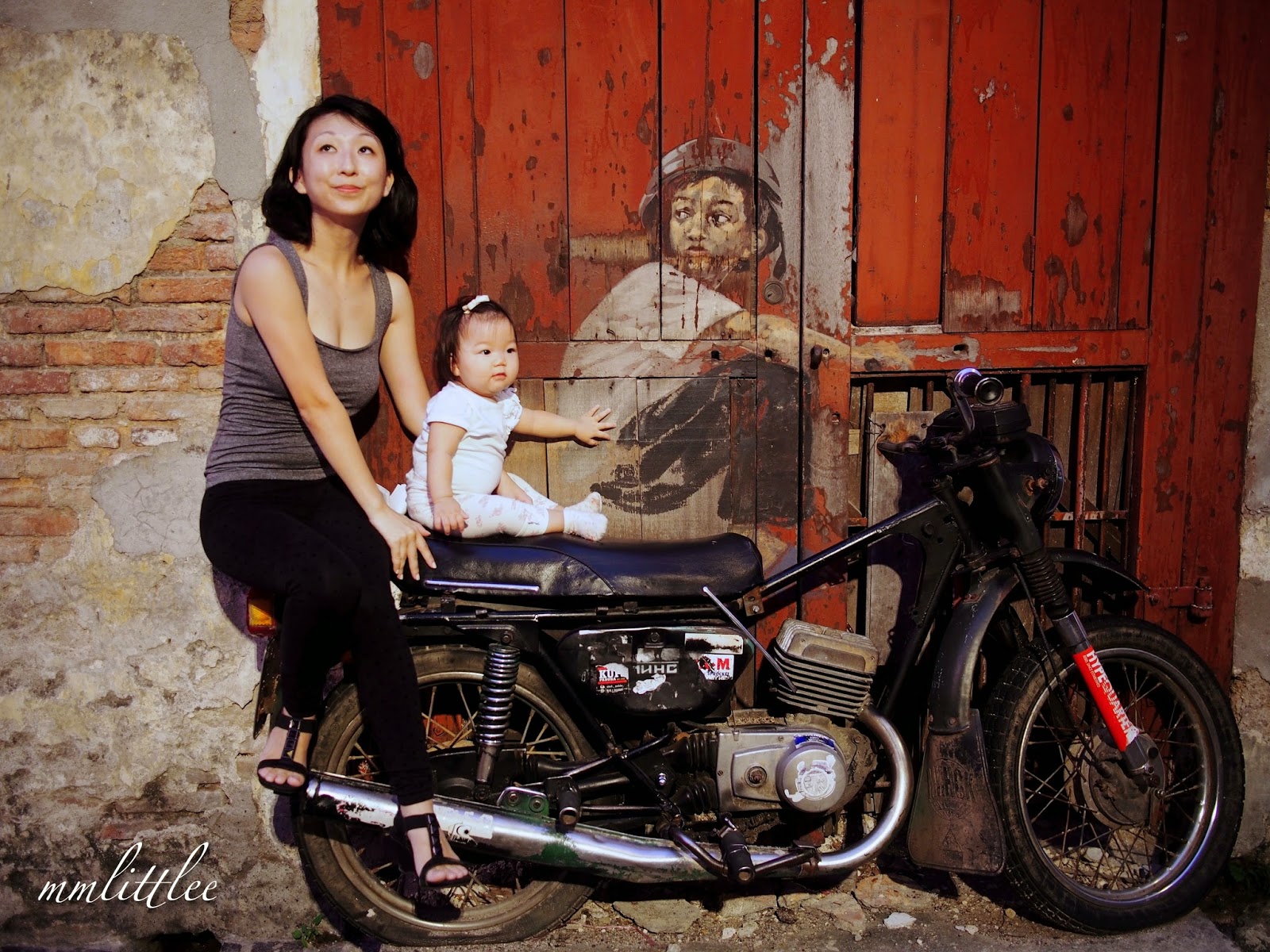 LITTLE CHILDREN ON A BICYCLE
This is my second favourite after the Swing mural. I think I am naturally attracted to sibling portraits after owning a pair myself or probably because I was always alone. This is Ernest Zacharevic's work, depicting a little girl taking her younger brother on a bicycle ride. The joy in their faces echoes down the street, providing a ray of cheer and adding character to Armenian Street. It is very hard to be creative with the shots especially with a crowd staring at you to finish up and the uncertainties of an accompanying child. 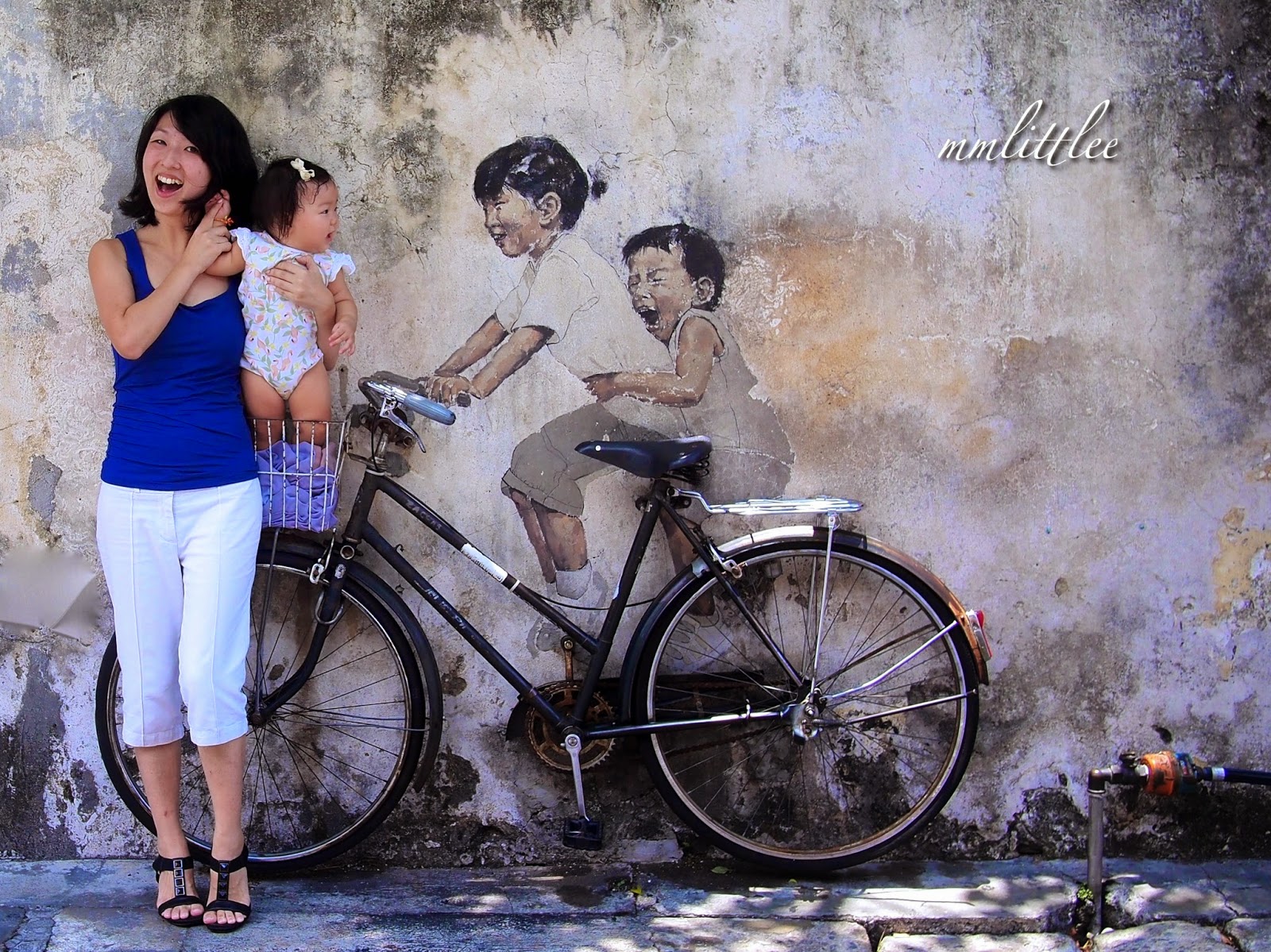 Edit: On 19th of August 2015, cars, shops and murals along Campbell Street and Armenian Street were spray painted with ”#4.0” in yellow including this Little Children On A Bicycle mural. On Ernest Zacharevic's instagram, he said,


“It’s amazing to be a spectator of your own artworks life… This piece has experienced more in last couple of years than most of the people in their entire life. Let the scars and wrinkles tell the story.”

On your next visit to Penang, this is what you will find until it has been restored. 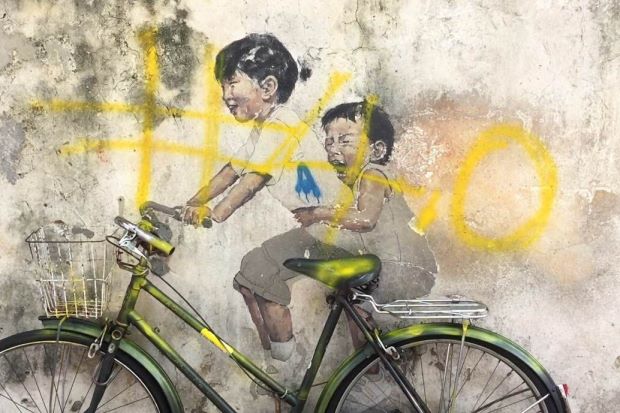 LION DANCE
Walk further into Lebuh Armenian, you will find a Lion Dance mural. There is no information about this painting or to whom it should be credited to. 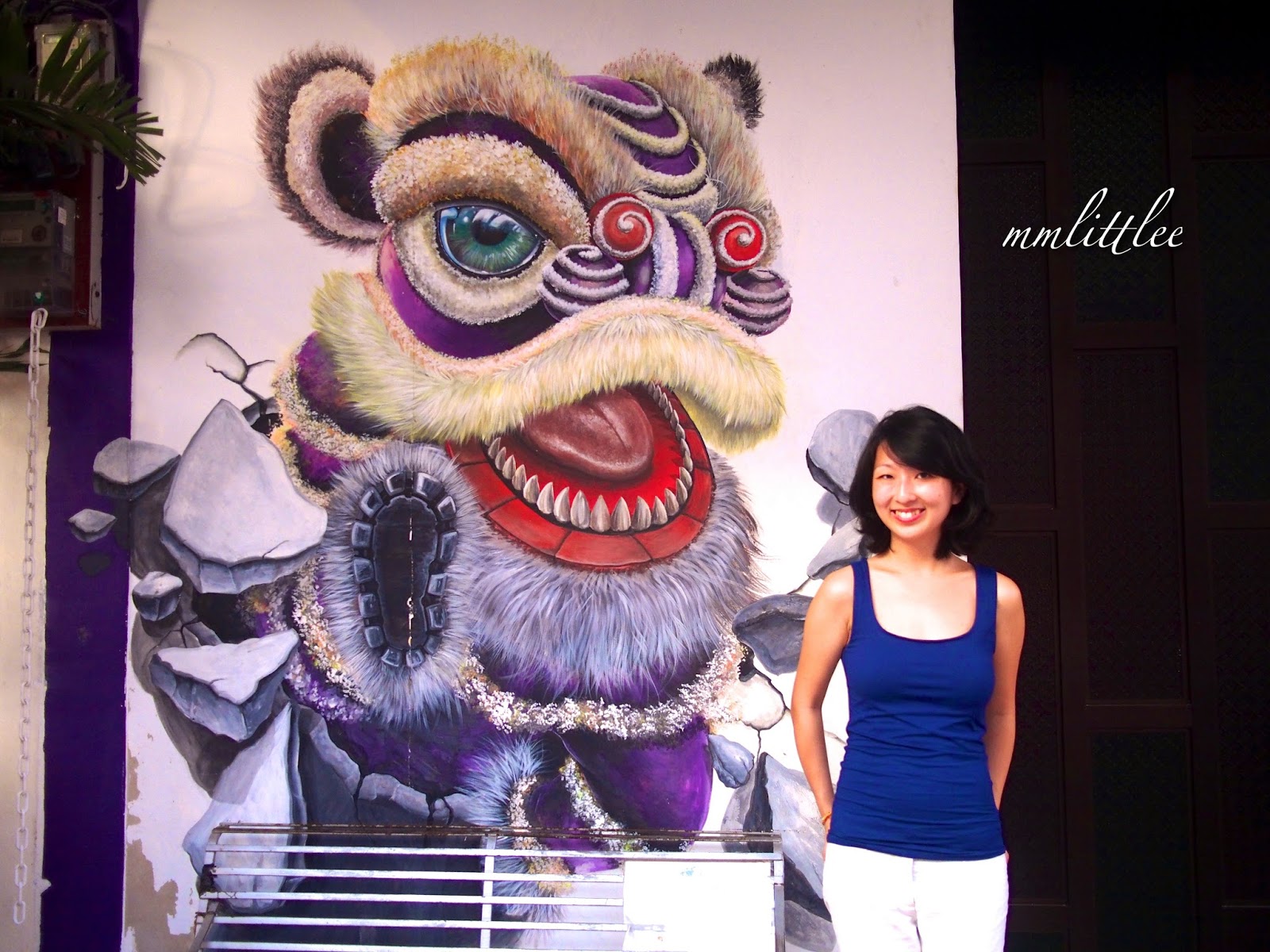 Honestly, I was a tad worried about engaging my littlest photography subjects (Faye and Ewan) but they did great! So if you mommies and daddies really want to do this but are skeptical about bringing the children along, all I can say is, "Brave It! You Will Never Know Till You Try!" In fact, the older kids may enjoy it!


REACHING UP
This mural by Ernest Zacharevic depicts a little boy reaching for a hole in the wall. He appears to be standing on a chair and inching himself as high as he could reach. It had attracted so many visitors that a souvenir shop took its glory and set up a stall right next to it. Aren't Penangites an entrepreneurial bunch? 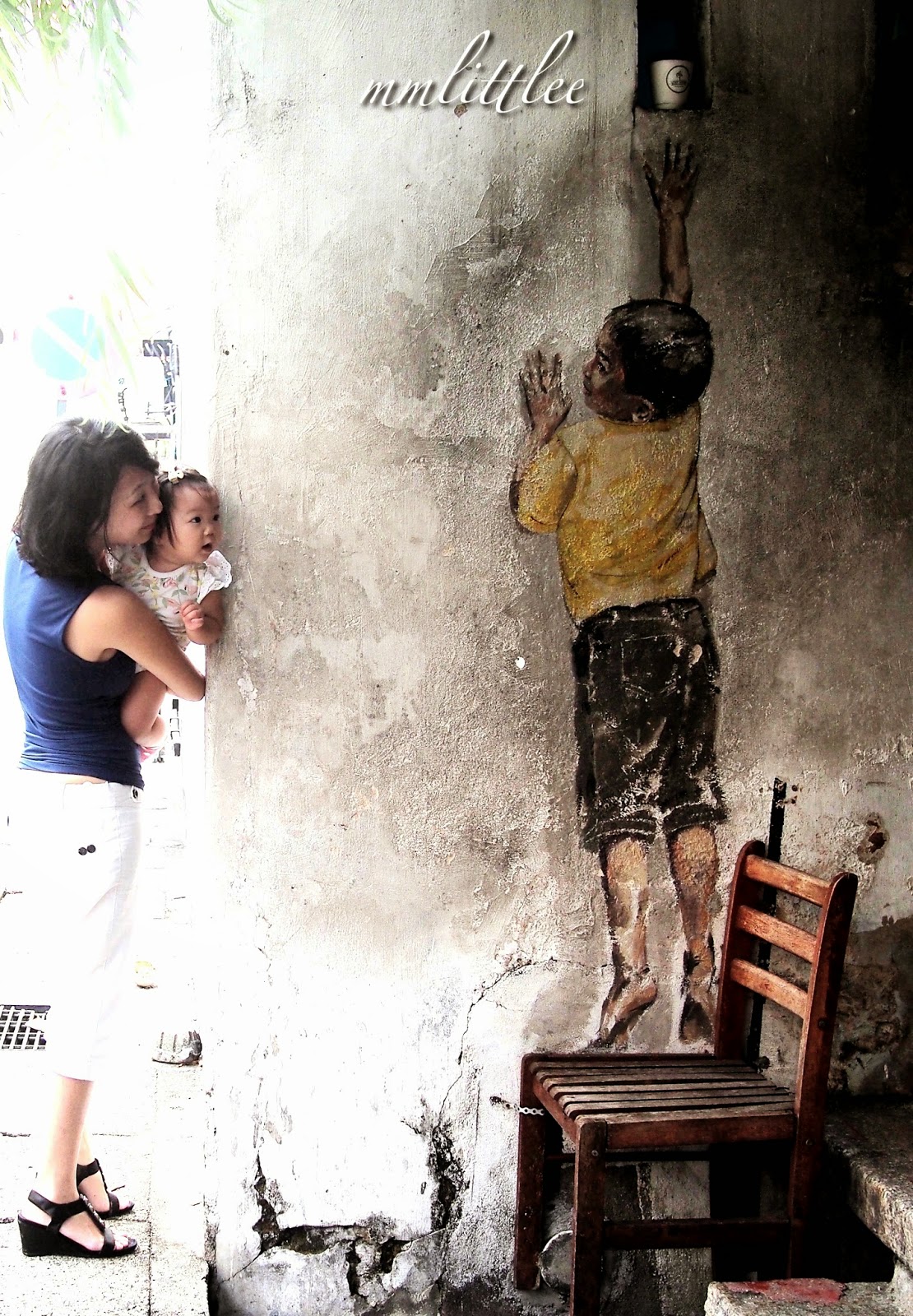 I consulted two maps for the run down:

I printed the Tourism Penang Map (which is less cluttered) as my handy pocket guide. As it depicted only those murals that Ernest Zacharevic had been commissioned to paint, I looked into the Interactive Google Map for the locations of popular street art by locals such as "I Want Pau" and "Brother and Sister on a Swing". I penned them into my printed map together with the location of my hotel and with that, we started our trek. You may want to consider hiring a trishaw to bring you around and they are priced at MYR45 per hour. 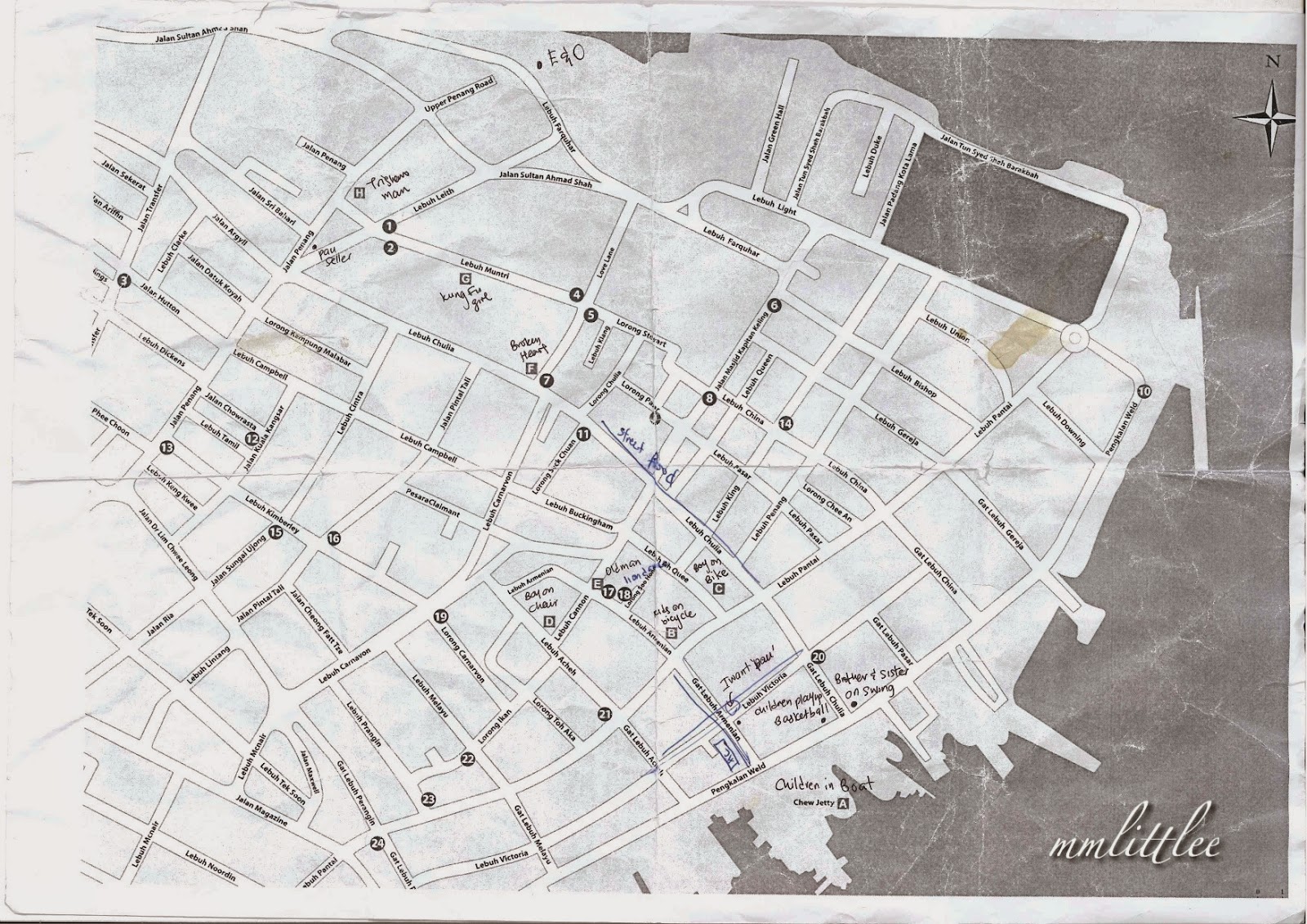 Below are three murals that have faded or painted over. So if you want to see the rest of the murals before they pale out with time, put Street Art of George Town next on your holiday list. 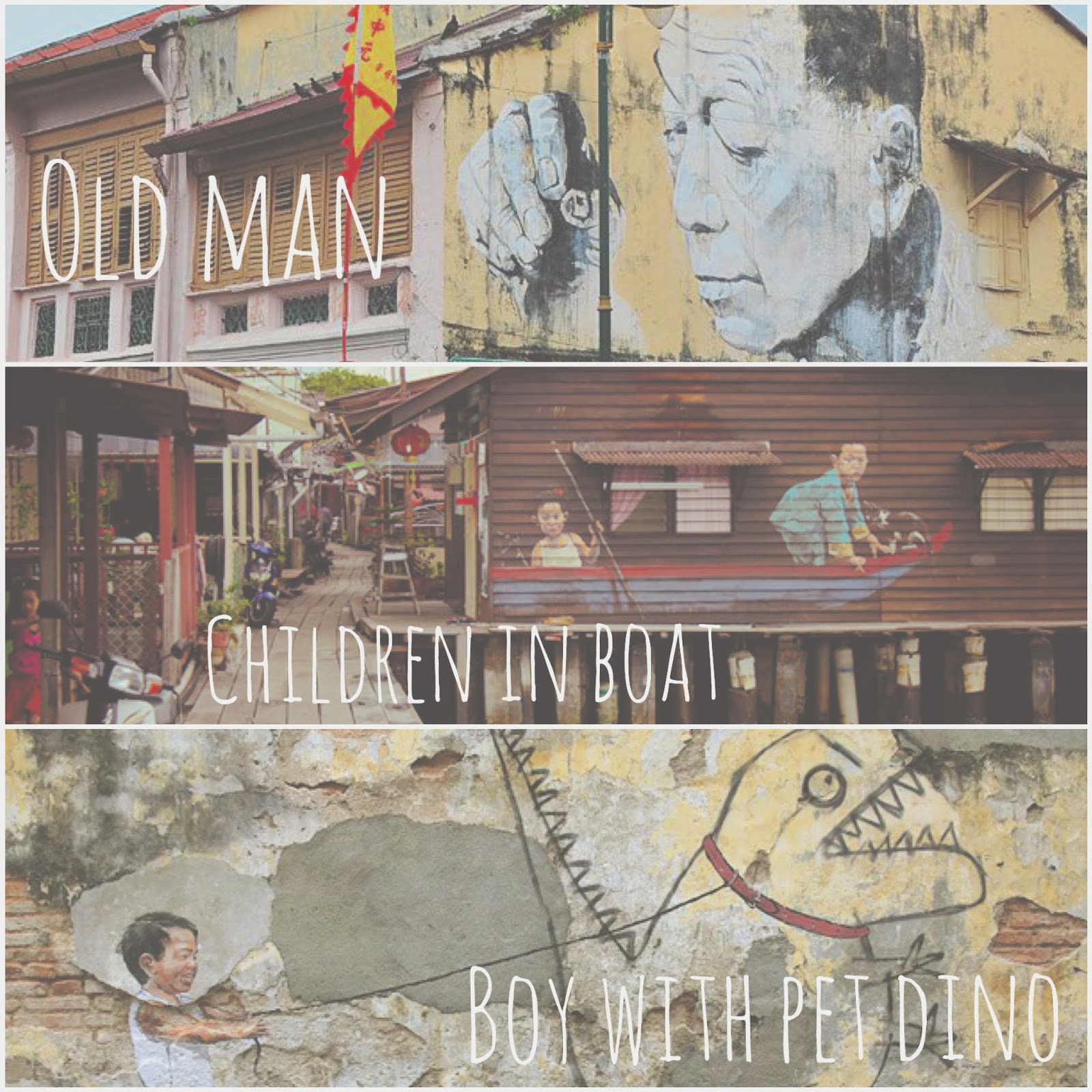 If you are keen to see more of Ernest Zacharevic's work, he has a gallery at the Eastern & Oriental Hotel in the Victory Annexe. I enjoy his work so much I am excited to hunt down the rest of his murals around the world! 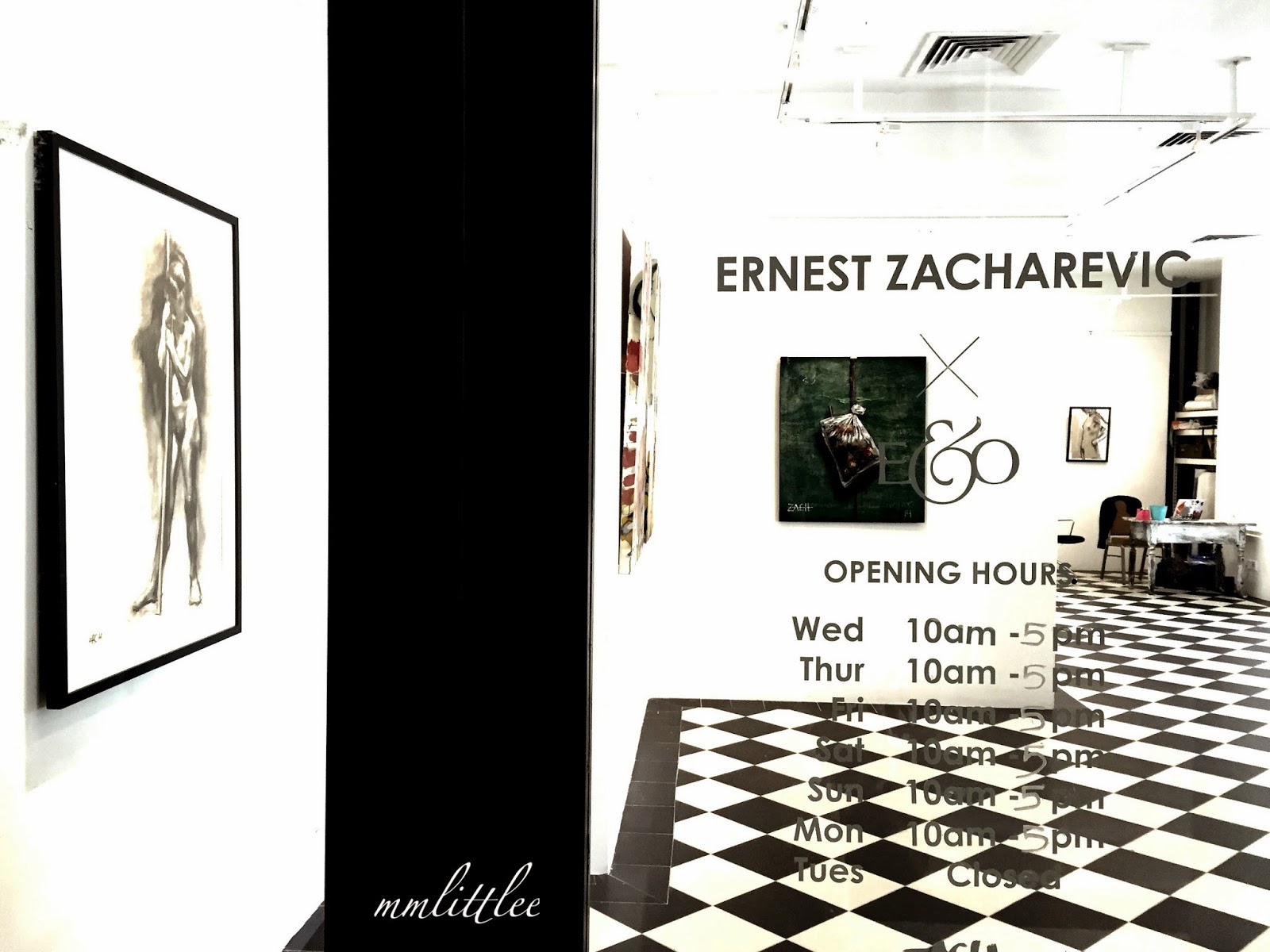 Our Little Travel Companions
April 2015 - Ewan at 36 months old and Faye at 10 months old
Click on our Travel tab to learn more on our tips and tricks! 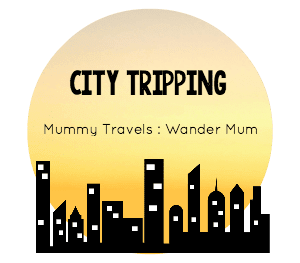