Only for the month of May, ending on the 28th, you technically have only three weeks to bring the family on a chocolate adventure at Universal Studios. Transforming the space where The Spectacular Santa's All-Star Christmas was housed [Soundstage 28], the team creatively put together an interactive sugar-rush-sugar-high candy experience including dipping marshmallows in chocolate fountains, hidden Hershey's kisses in the cocoa hedge maze waiting to be discovered, characters meet-and-greet [my favourite *squeals*] and cookie and cupcake making workshops.

The FACTS before the experience shall we?

To be honest, I was reluctant to bring the children because I didn't want to suffer from hyperactive kids after we leave! We went anyways because daddy said, "Oh just let them enjoy. They are kids and kids love sweets!"

I loosened all strings and let them go wild [and overboard]. They are stuffing their faces with marshmallows and Hershey's kisses. I am certain they were overdosed *hahah* but this once-in-a-blue-moon indulgence made them very happy.

Cocoa Hedge Maze is a mini maze that you will never get lost in, so do not worry if your little one wants to go for an exploration. There are Hershey's kisses everywhere on top of the hedges and it's supposed to be free treats for kids who find them! Children under the age of 10 like mine aren't tall enough to know because they cannot see beyond the hedges. If you want them to be part of this kisses  treasure hunt, do give them a boost to look over the hedges and collect their chocolates. Otherwise, keep quiet about it and move on! 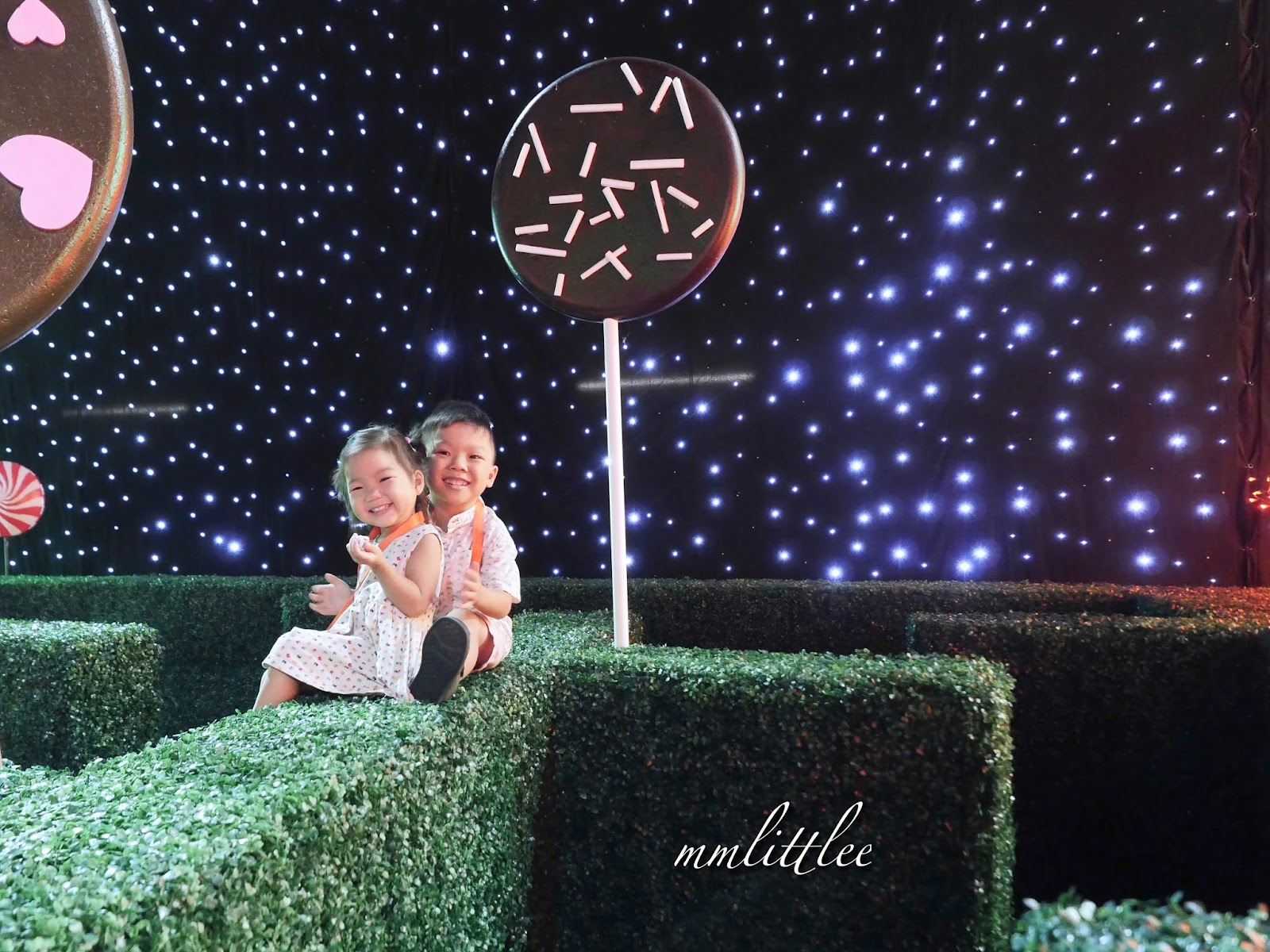 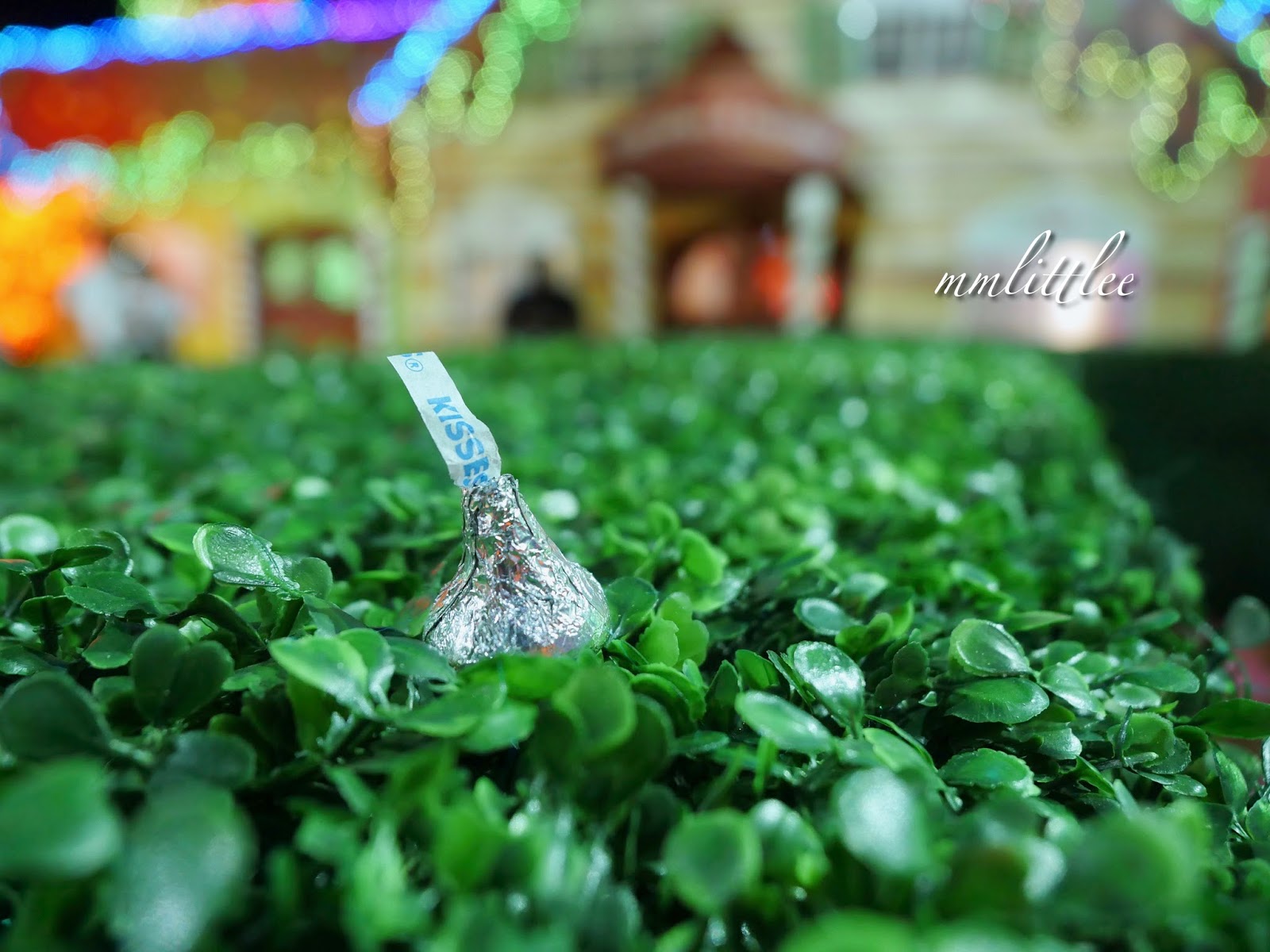 Characters Meet-And-Greet are my favourite! There is still that little girl in me who looks forward to being hugged by Sesame Street mascots. When I watch Elmo, Grover, Big Bird and his friends stage a show, I get all emotional with tears welling up in my eyes and clapping my hardest at curtain call! I must have missed my childhood a lot!

I don't know who Mama Cookie or Candice Cupcake were but they were very good at playing the role they were given! An absolutely entertaining and immersive experience.

When Cookie Monster made his debut, everyone ran towards him and he became the star of the show! Thankfully, Candice Cupcake or Mama Cookie weren't jealous. Lost  in her own conversations with Mama Cookie [caught on tape by me], Candice even said that Cookie Monster was her favourite!

I was sugar high just from running after him for pictures! I requested that he played a mini game of hide-and-seek with Ewan in the cocoa hedge maze and he spontaneously did! Too adorable this fella. I have new found respect for actors working behind a heavy costume. You don't get any kind of recognition and you take after someone else's persona. It is not the easiest job but they bring so much joy to everyone on the floor. 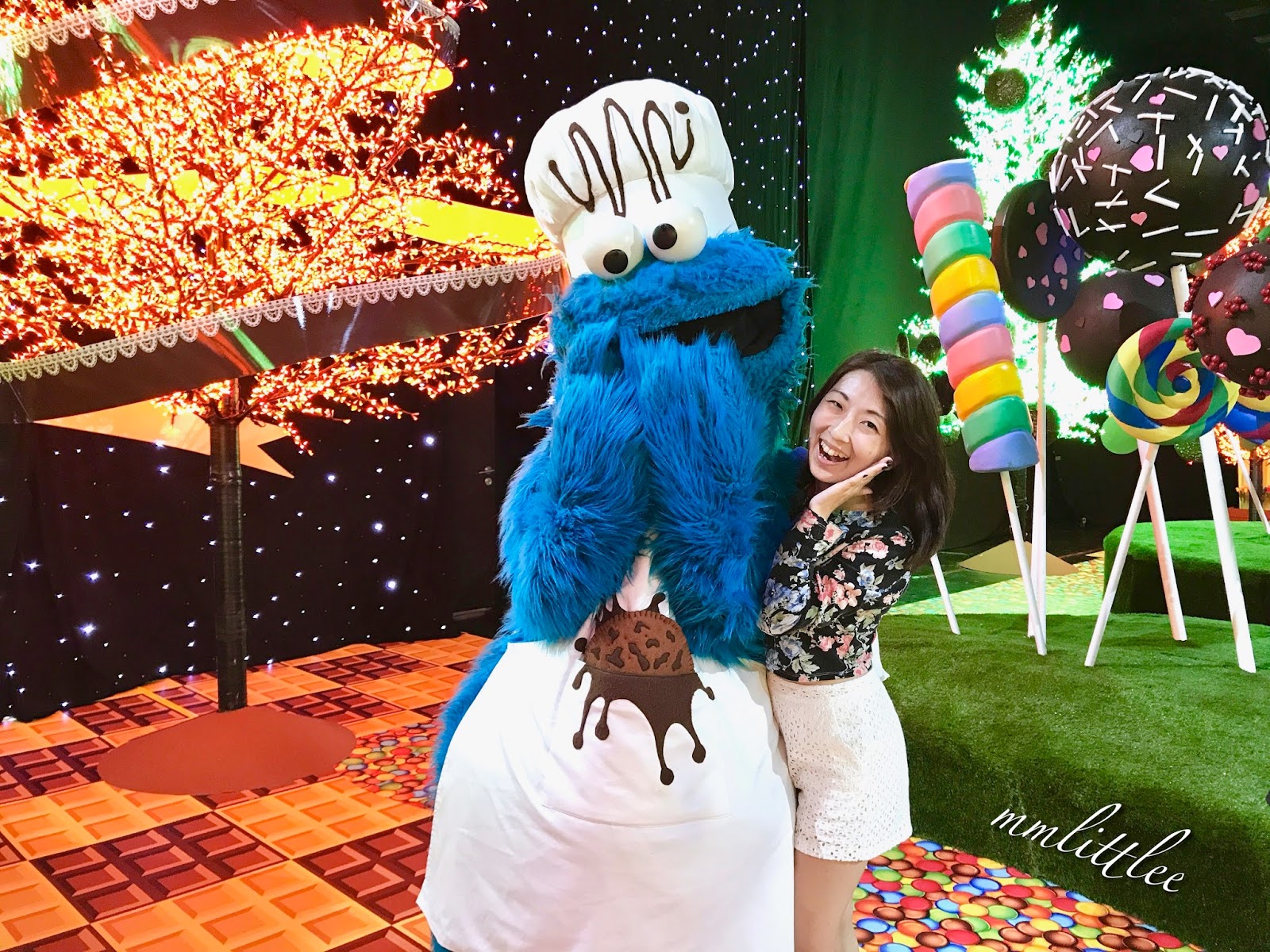 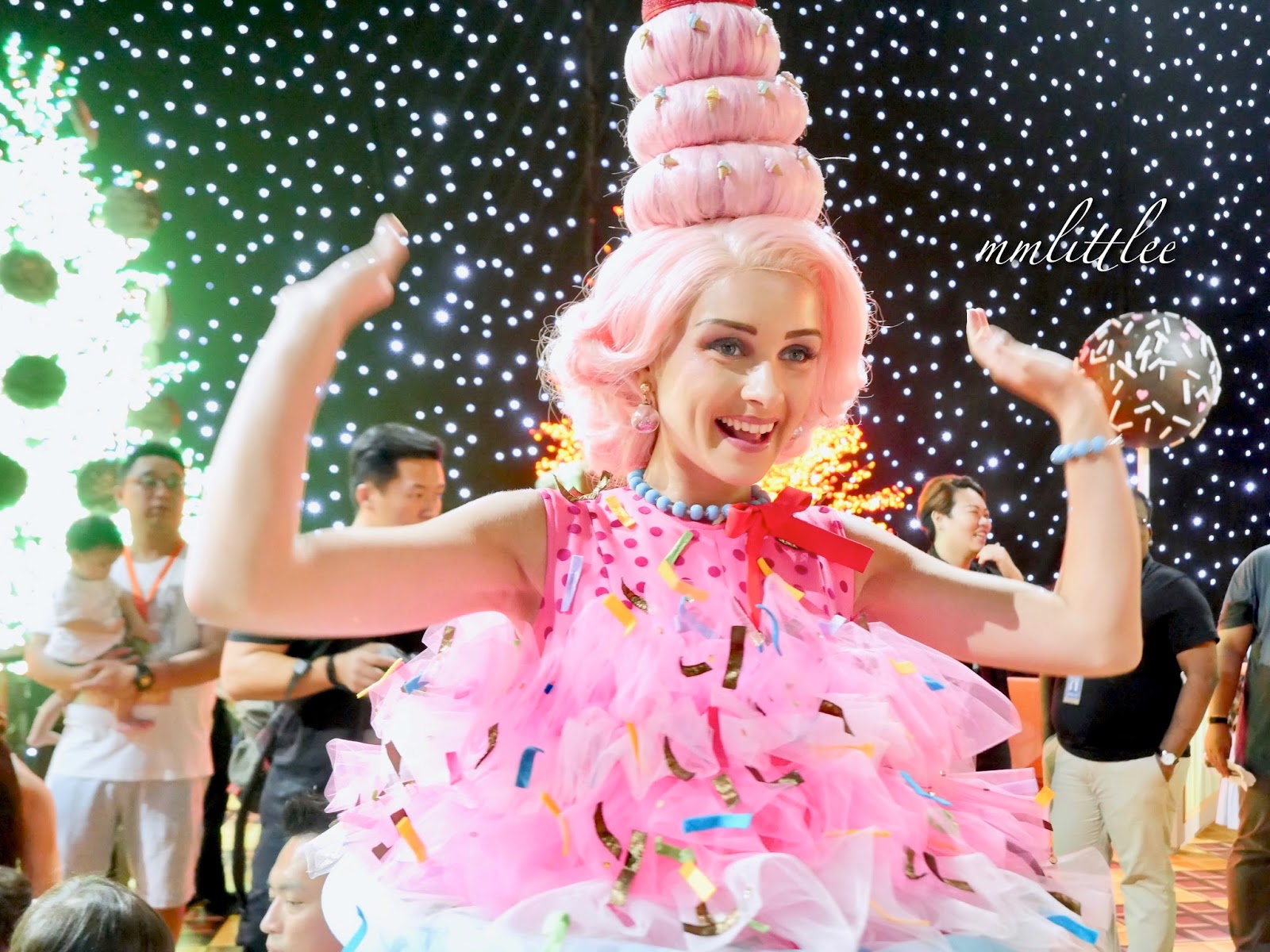 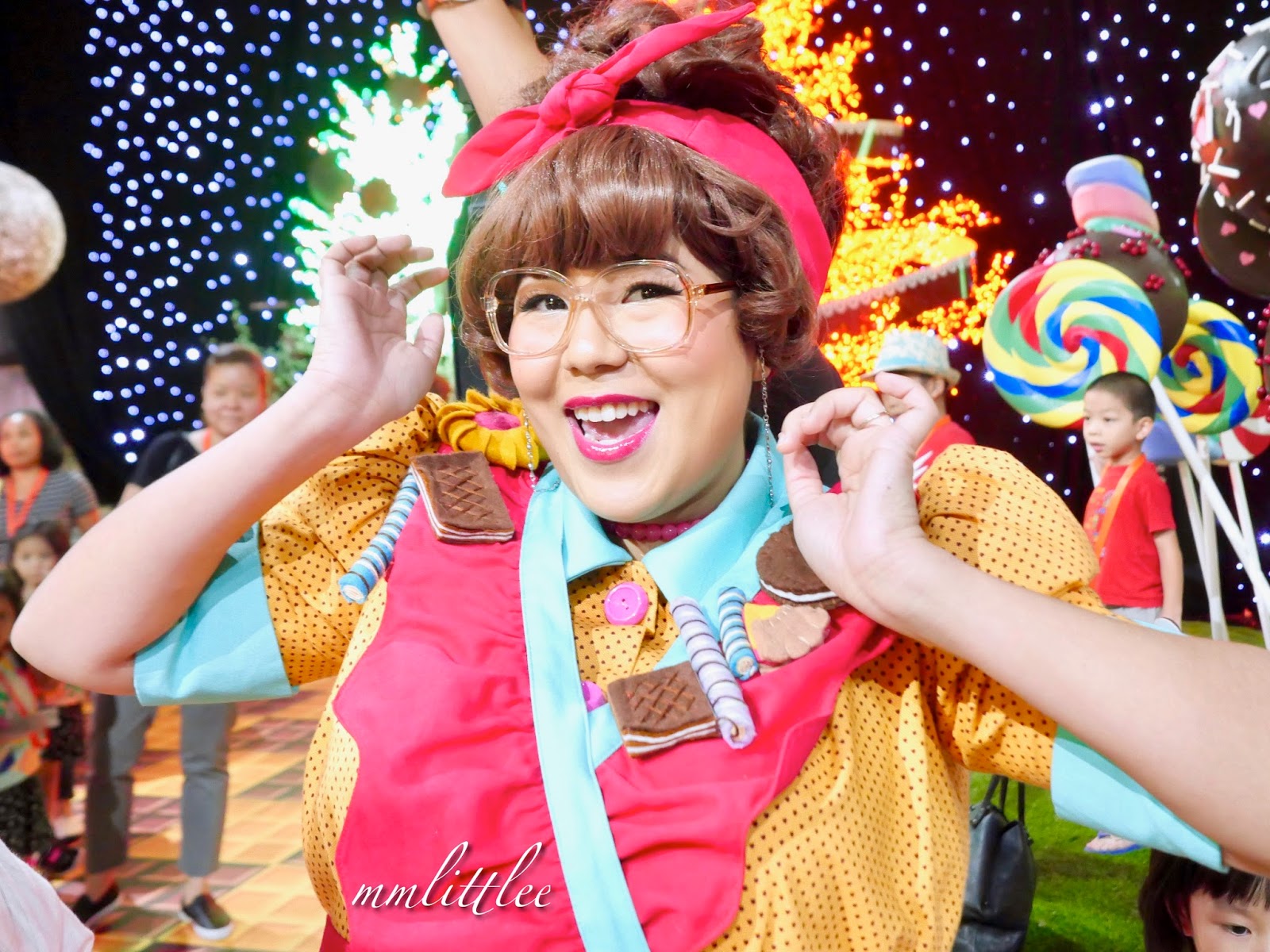 The Chocolate Garden is a beautiful space with every corner absolutely instagrammable. There were lighted-up trees from The Spectacular Santa's All-Star Christmas season which they upcycled to fit the chocolate theme by hanging giant cookies and choco on them! I especially liked the Lollipop backdrop and couldn't stop photographing ourselves with it. 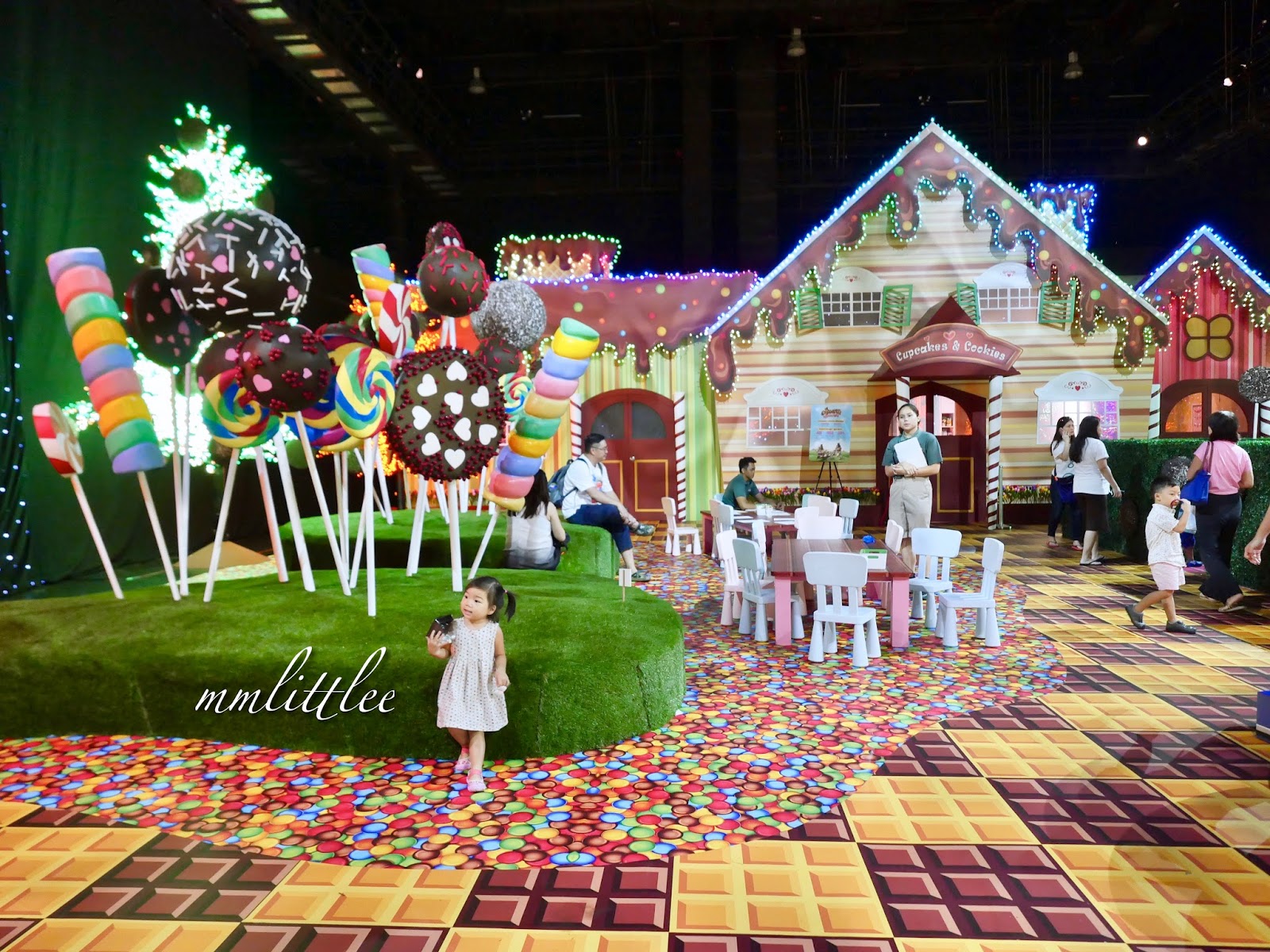 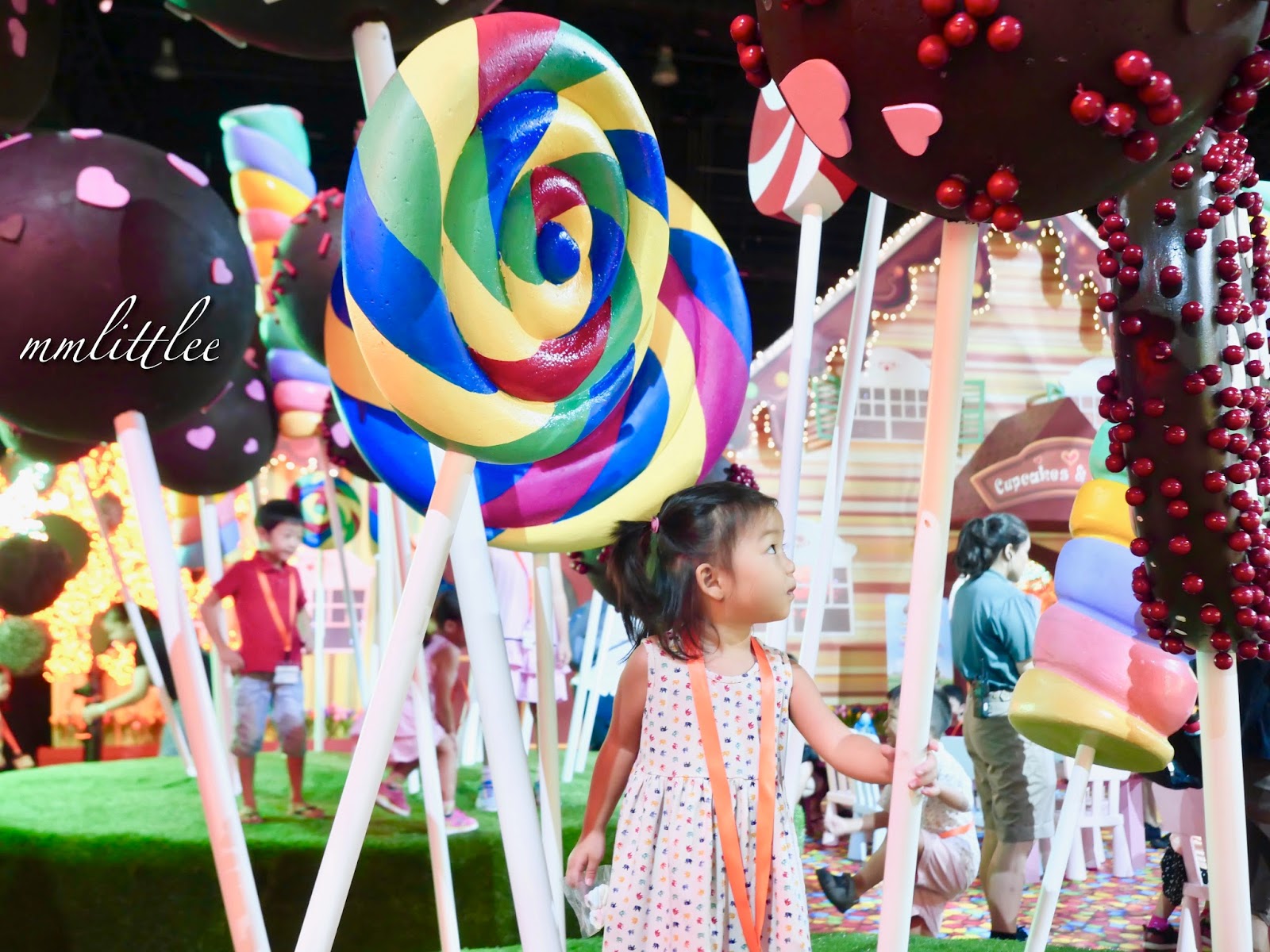 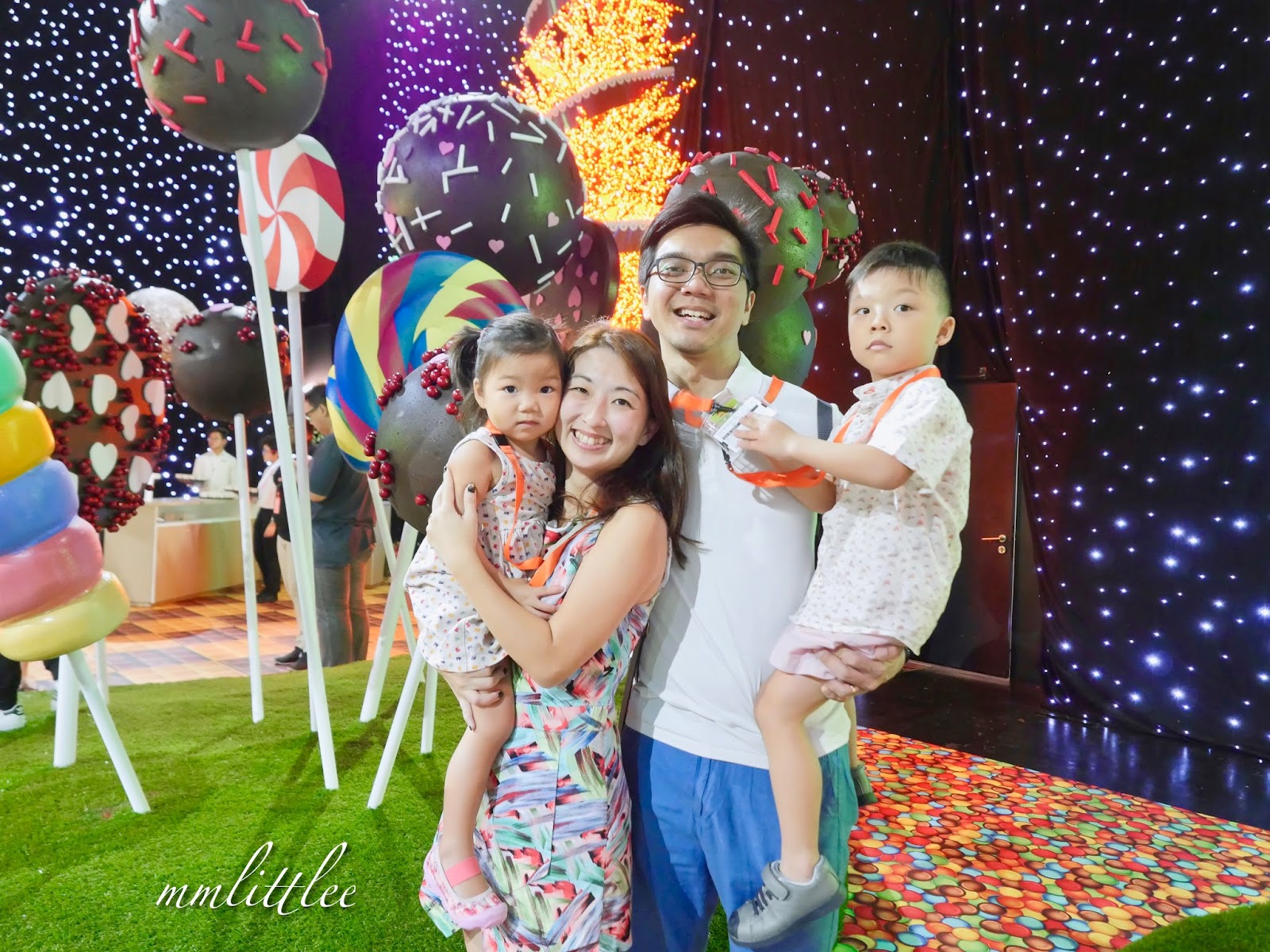 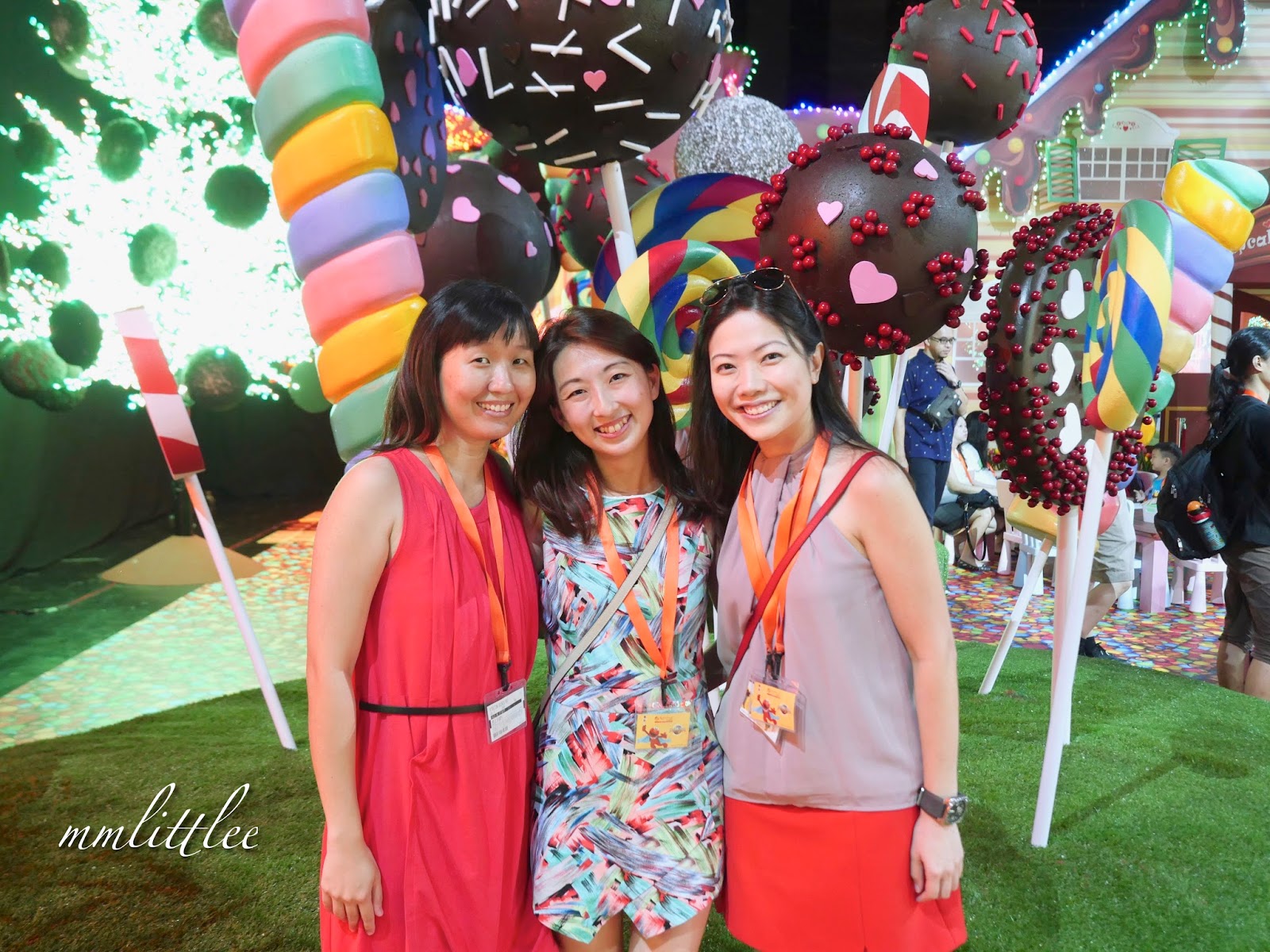 A Gingerbread House sits grandly in the room that beckons every child to enter! Alas. It isn't opened throughout the day. There are only four timings that it opens its doors for cookie and cupcake making workshops - hourly from 1300 hours to 1600 hours [see time schedule above]. There will always be a chef demonstration at the start to teach the children the How Tos and they will adjourn to their respective seats to get started with making their cookies or cupcakes!

Oh gosh. My children made the most disgusting cookies! Ewan named his cookie, "The Lava Explosion"! It was absolutely the wrongest thing that could happen to a cookie but he was very proud of his creation.

Cost: S$6 per person or Free for Season or Annual pass holders 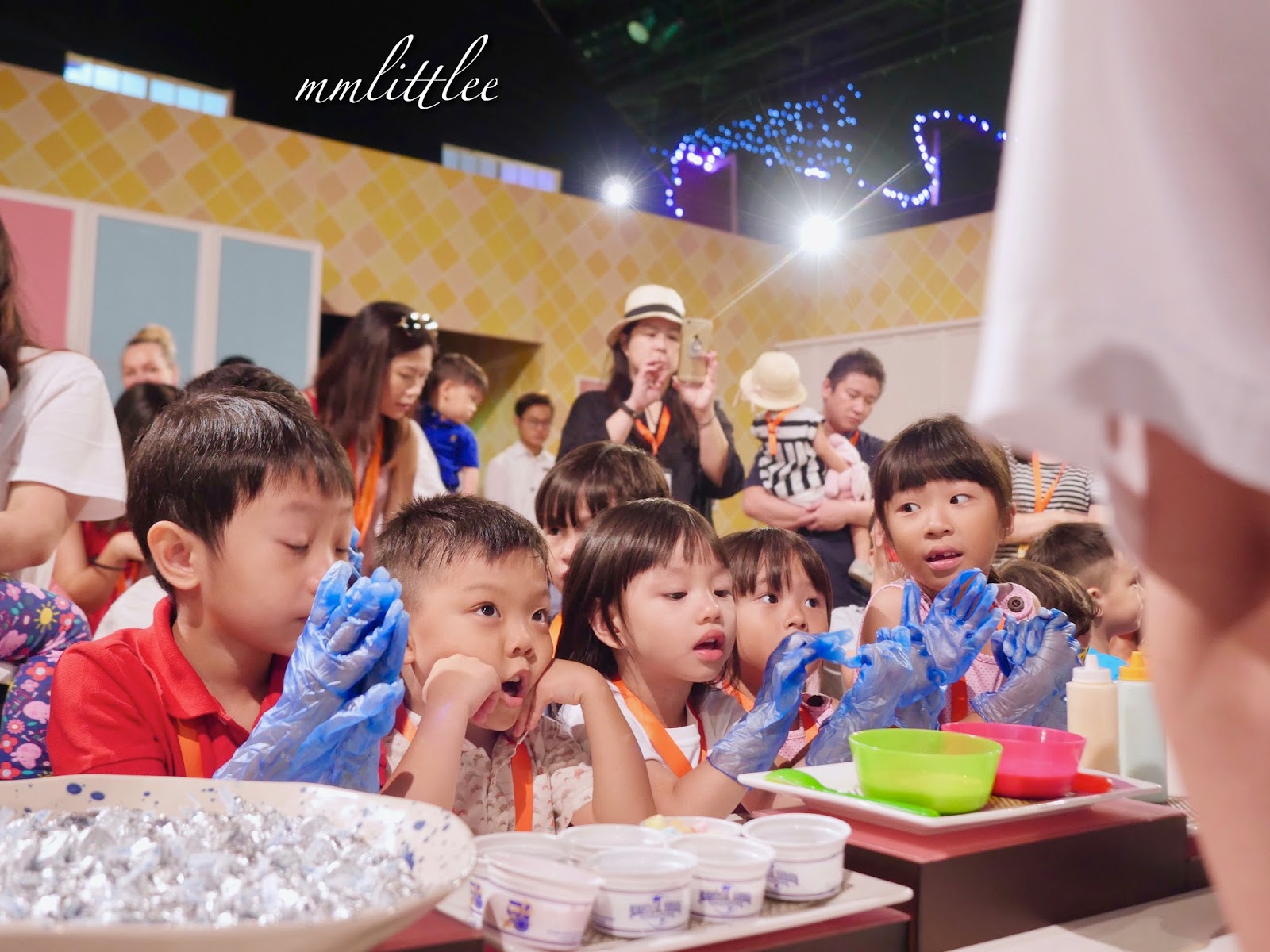 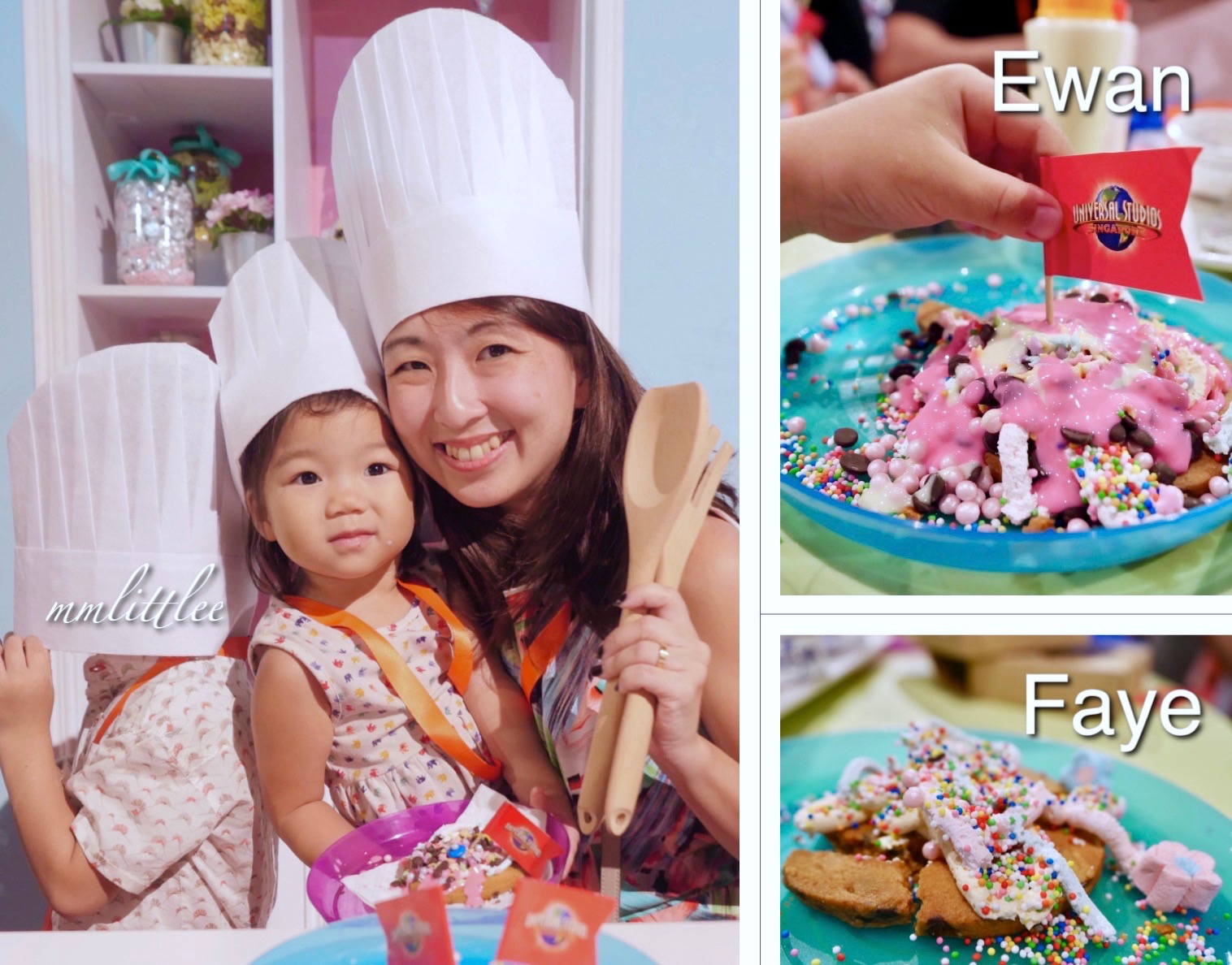 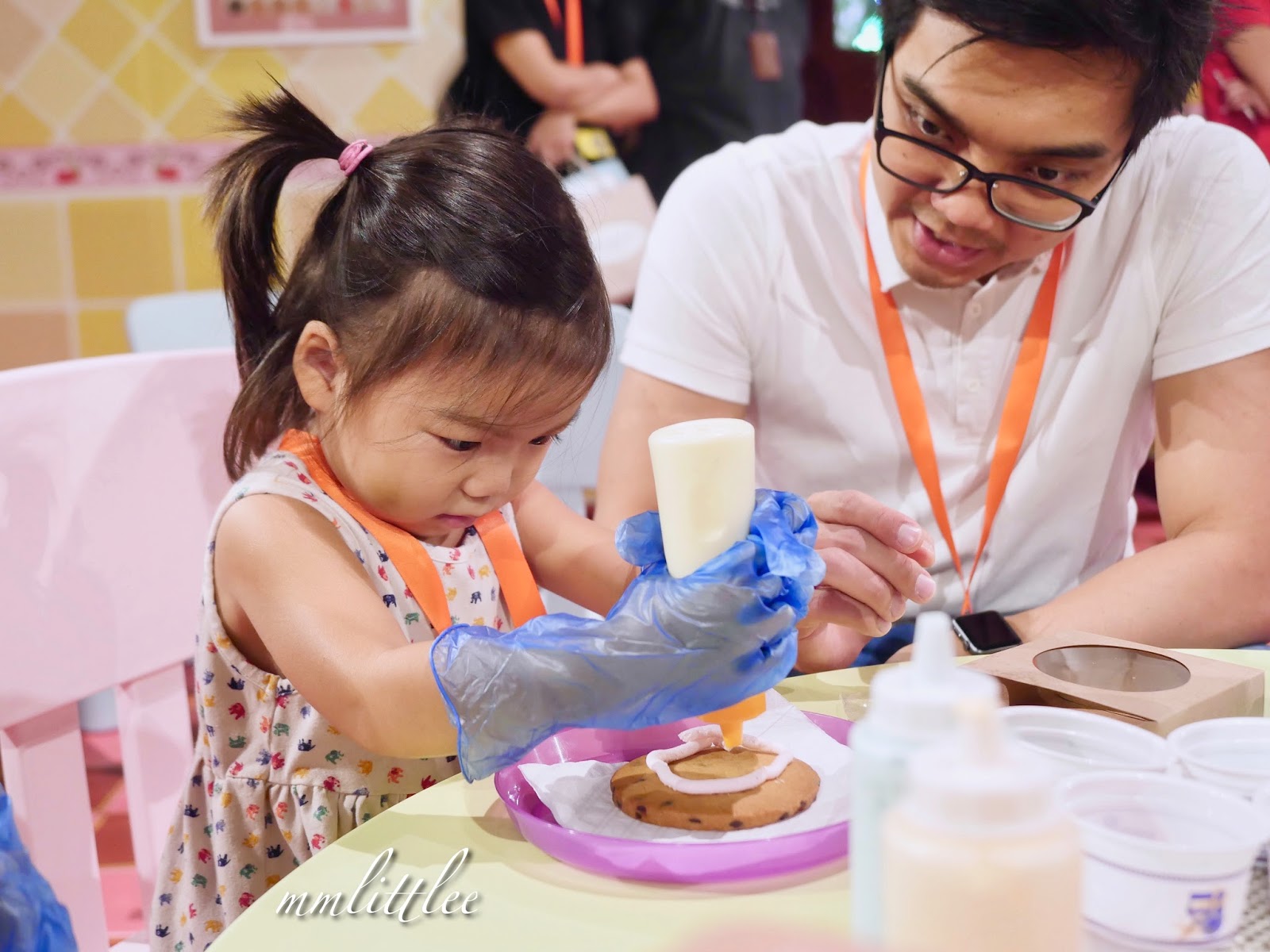 Chocolate Fountain and Sweet Treats aren't my favourite. To begin with, I was never a sweet-tooth. Not even when I was a child. I remember my mother sharing how hard she tried to stuff me with chocolates, candies, ice-creams, cakes and unhealthy gassy drinks because I was a small kid. Unfortunately, I hated them.

So yesterday, I made no attempt to dip my marshmallows in any fountain and steered clear even from Hershey's kisses. I heaved a sigh of relief after learning that people had been double dipping [dipping their half-bite marshmallows into the fountain again] their marshmallows into the fountain! I mean, do they think chocolate fountains come with a filter at the bottom like swimming pools and they come back up clean? Or maybe they thought the chocolate goes down into a invisible bin under the table and new chocolate syrup comes back from the top.

Rachel of The Pleasure Monger shared that she witnessed a kid hovering over the fountain and letting chocolate drip off his lips! *gasps* Gross!

Well, I really love the Chocolate Garden but I think we should refrain from working our way through the chocolate fountains. I had never thought it would be unhygienic like that but we cannot deny that people bear different cultures and public [saliva] sharing could be acceptable. This is indeed a public fountain for all to share and if one person does not think of the next, we get problems like this.

Most of the time, we think only for ourselves [especially children] and not for others. It is a hypnotising fountain I must say! I don't think it's hard to resist a little finger dipping itself in it rather than a marshmallow too.

There were people giving out packets of marshmallows at the entrance of Universal Studios Singapore for free when we arrived! Collect those if you want free marshmallows because it costs S$1 for four pieces in the Chocolate Garden! 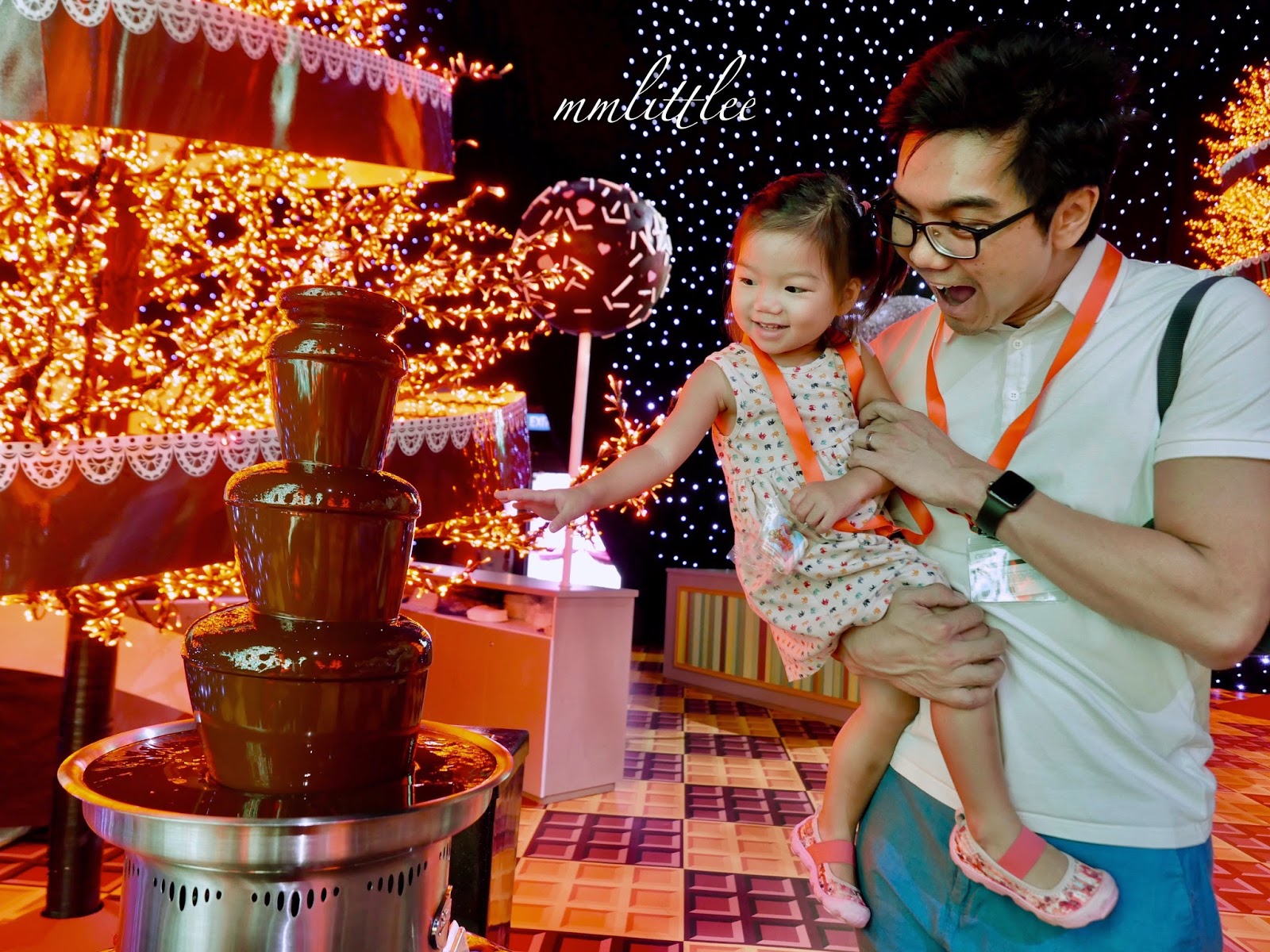 GO FOR THIS CHOCOLATE ADVENTURE! I promise you will not regret meeting Cookie Monster! However, beware of that chocolate fountain. *haha* Alternatively, encourage your kids to enjoy their marshmallows, neat. 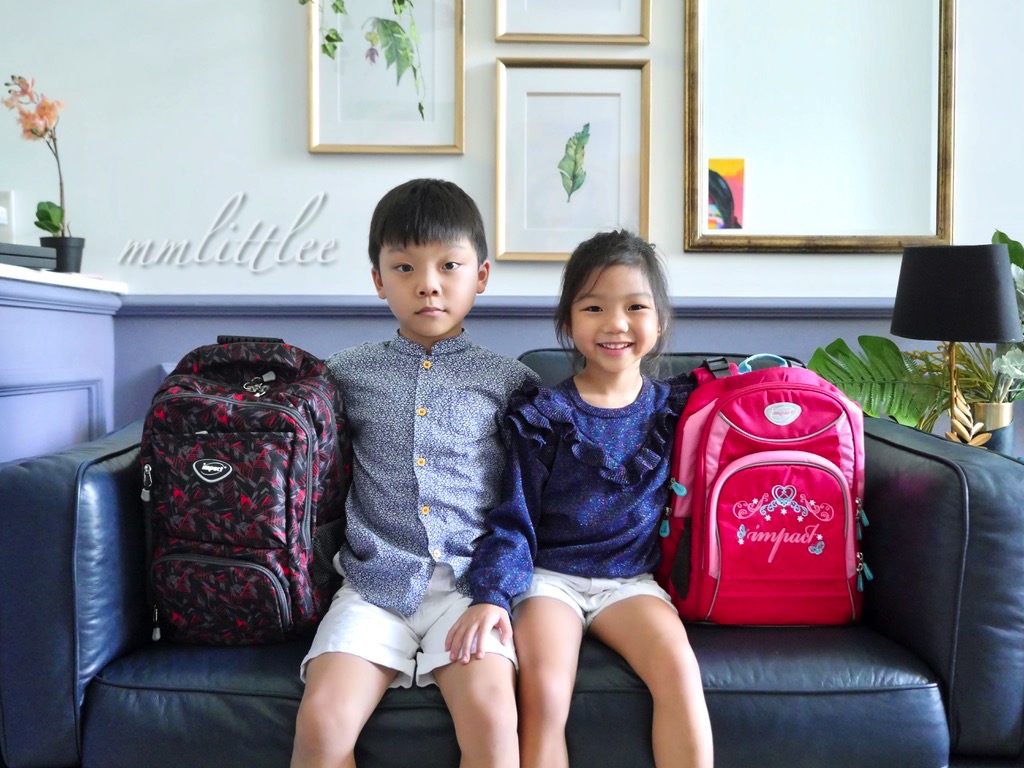