Skip to main content
Labels
Posted by May January 27, 2015

This used to be my playground

I want to relive my childhood.

I want to share snippets of my childhood with Ewan and Faye. If it meant travelling out of the way to  bring them to the physical sites of my play grounds, I would.

Children in the 1970s and 80s can relate to those nostalgic animal and fruit structures which are probably the equivalent to iPad games for the children in this current time. While we hung around in neighbourhood playgrounds digging our toes into the sand, our children are now pleading us for the iPad to watch an Indian version of Old MacDonald's. *Holy Moly* I would take Ewan and Faye to the dragon playground in Toa Payoh via public transport even if it meant a 2 hour commute! Stay Back You - iPad!

Ms Antoinette Wong, owner of curio shop The Little Dröm Store made dress pins in the likeness of the dragon's head, the elephant and the pelican. She says: "It's sad hearing that there are so few left. If they are going to disappear, we should at least preserve them in small ways."

Oh Thank you Antoinette! I was inspired and made last Sunday a playdate to remember. We started the morning early and met Ewan's little friends at our first stop - the Watermelon playground - which you stumbled upon while on your trek to finding old Singapore. The children were thrilled! It was like Jack and the Beanstalk! Tiny beings with a gigantic food produce.

With The Little Dröm Store's wearable art, I created a simple legend with the playgrounds' addresses and off we went on our playground hunt! The daddies were tasked to be the designated drivers for the morning so the legend and the road map act as visual aids for them. Oh and we got everyone to dress as retro as possible! Check out our attempt to blend in. 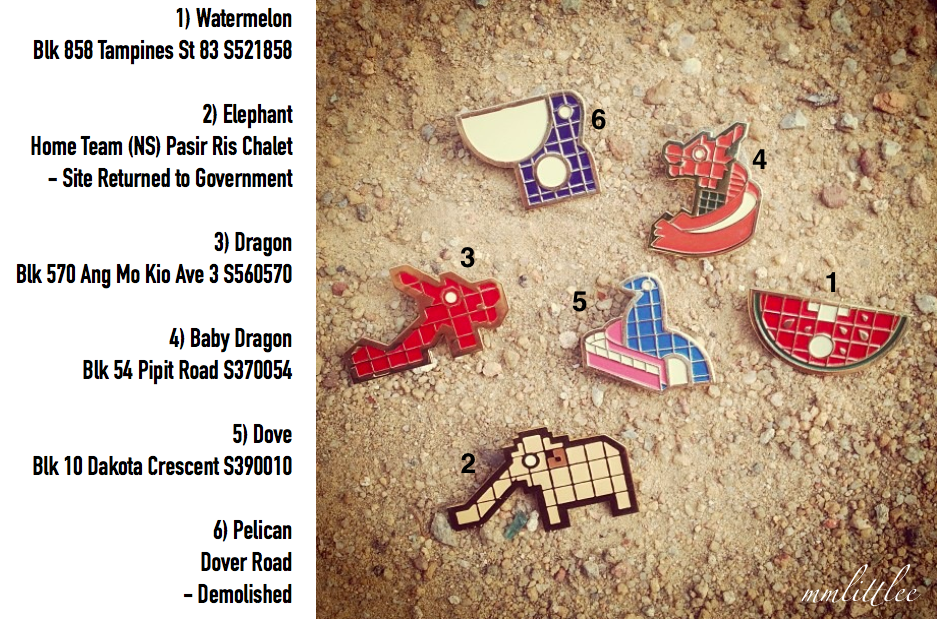 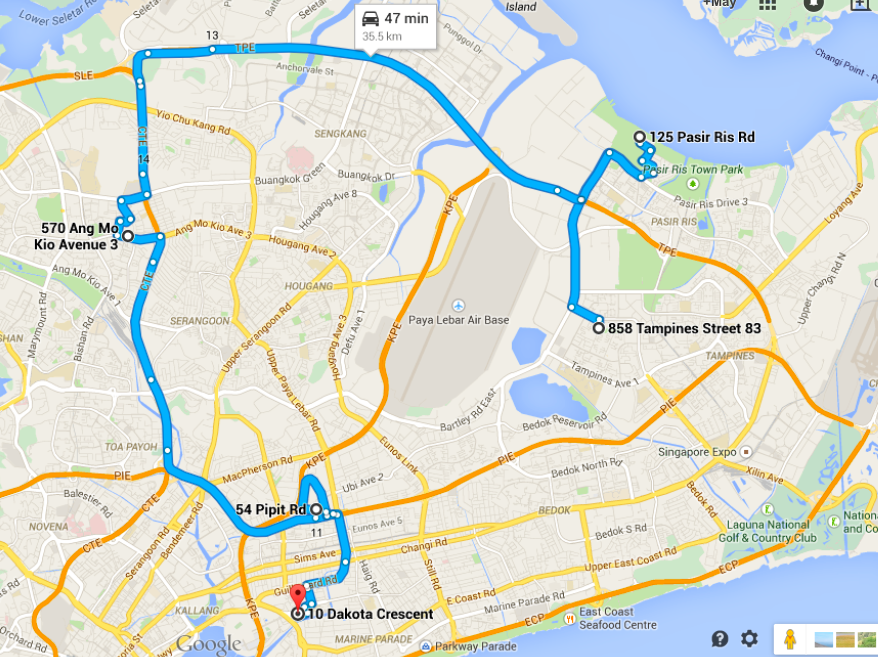 This is the last standing watermelon playground in Singapore, refurbished with rubber mat and one missing swing. It is a pity it is not well-mainained with rusty grills and rubber tears. Nevertheless, it shouts JUICY! Oh mine went crazy on the slide! He loved it so much he licked the rusty grills *ewwwwww*

Hey Kids, to be honest, Mom and Dad had never played in a watermelon playground before. This was our first as much as it was yours! We never knew fruit playgrounds existed until I sat down and got my act together for this research. 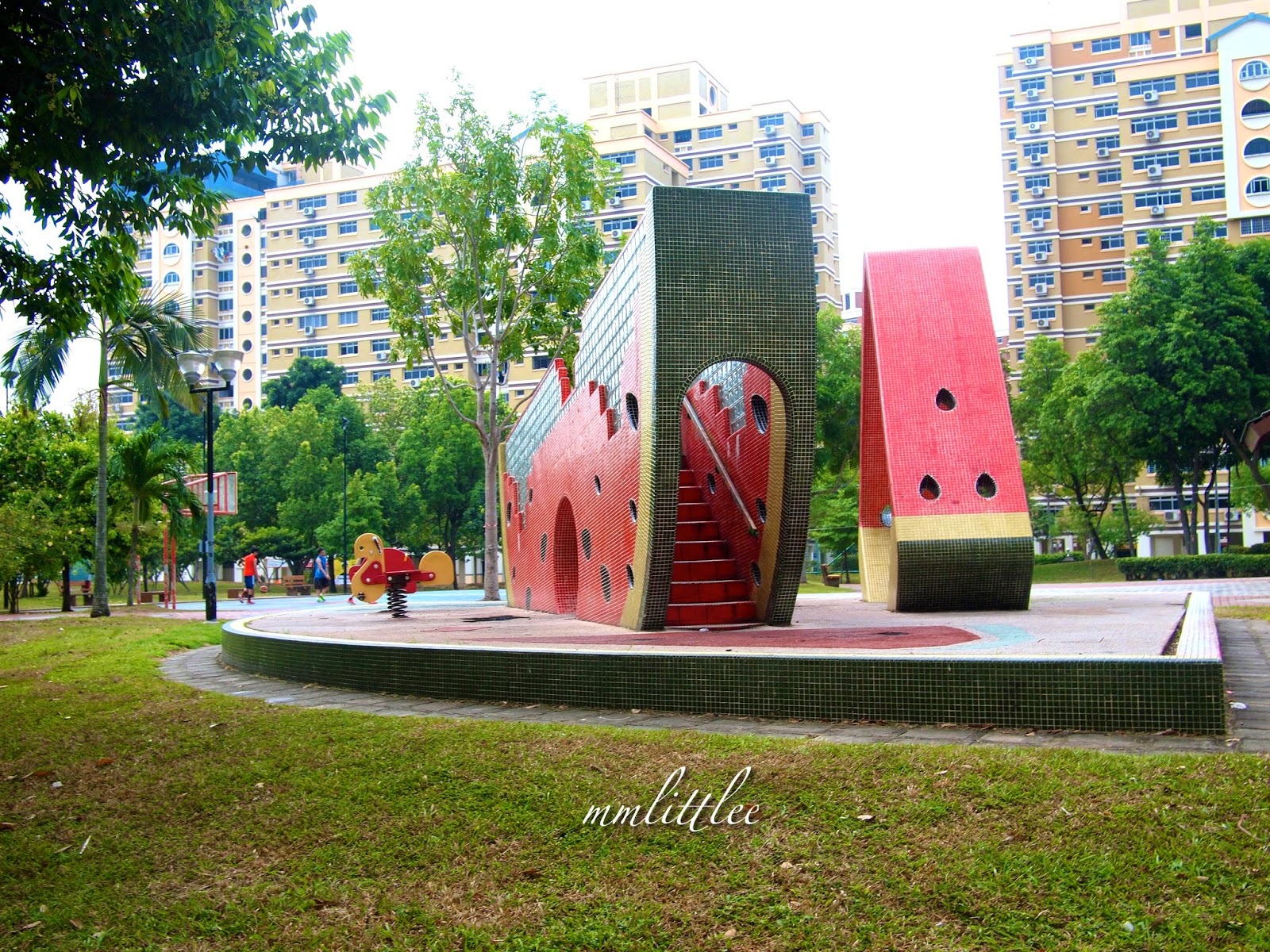 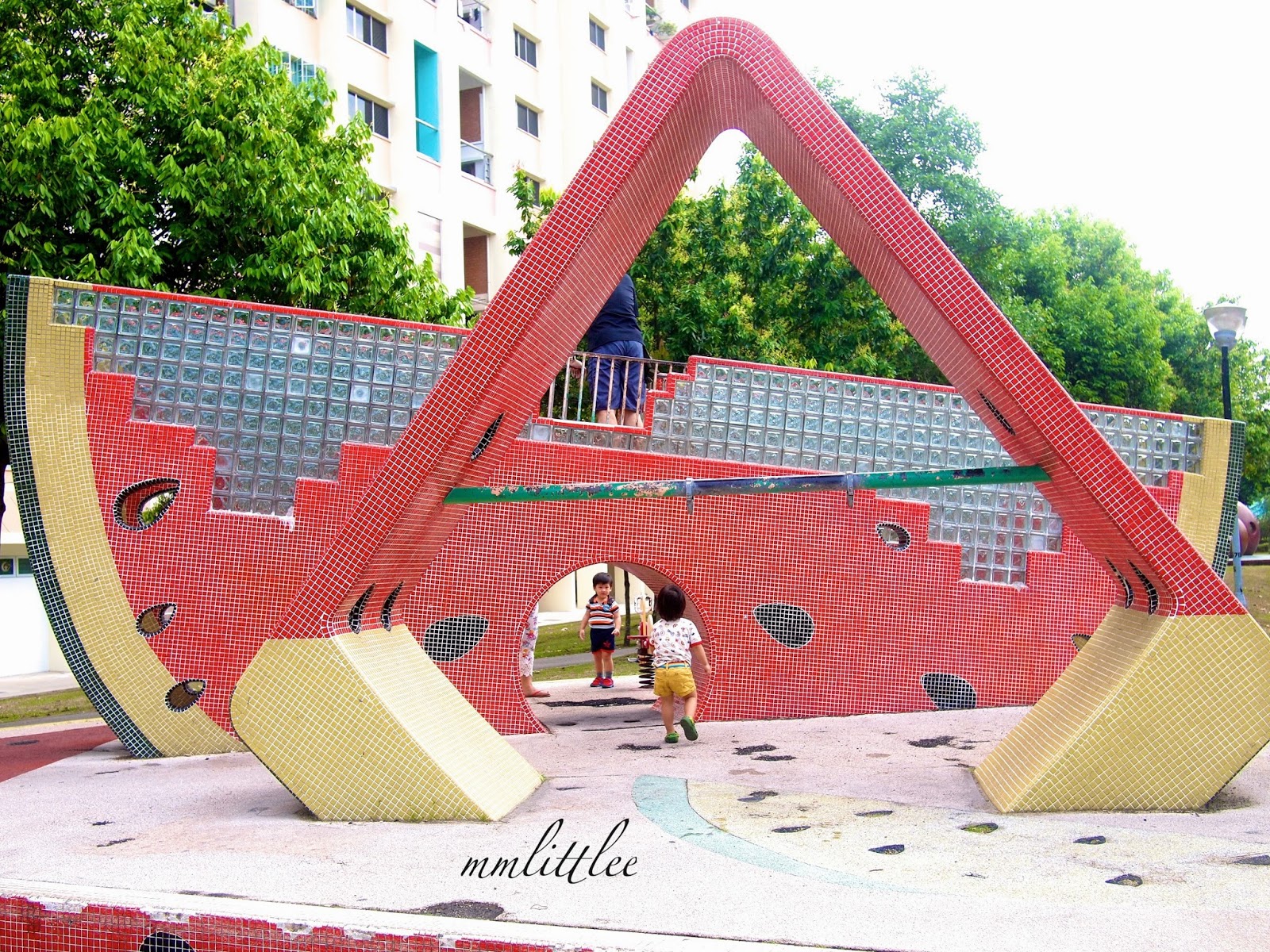 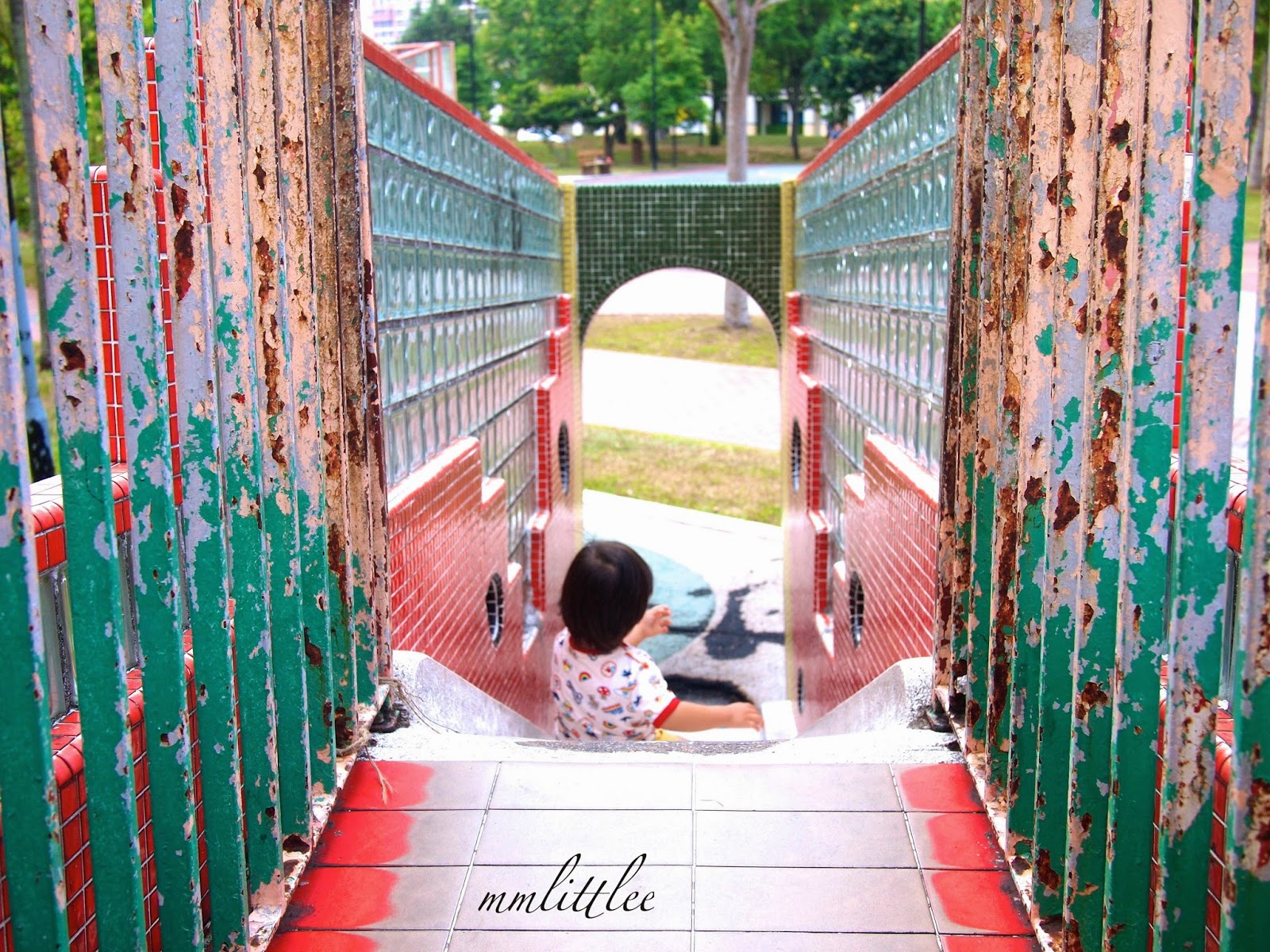 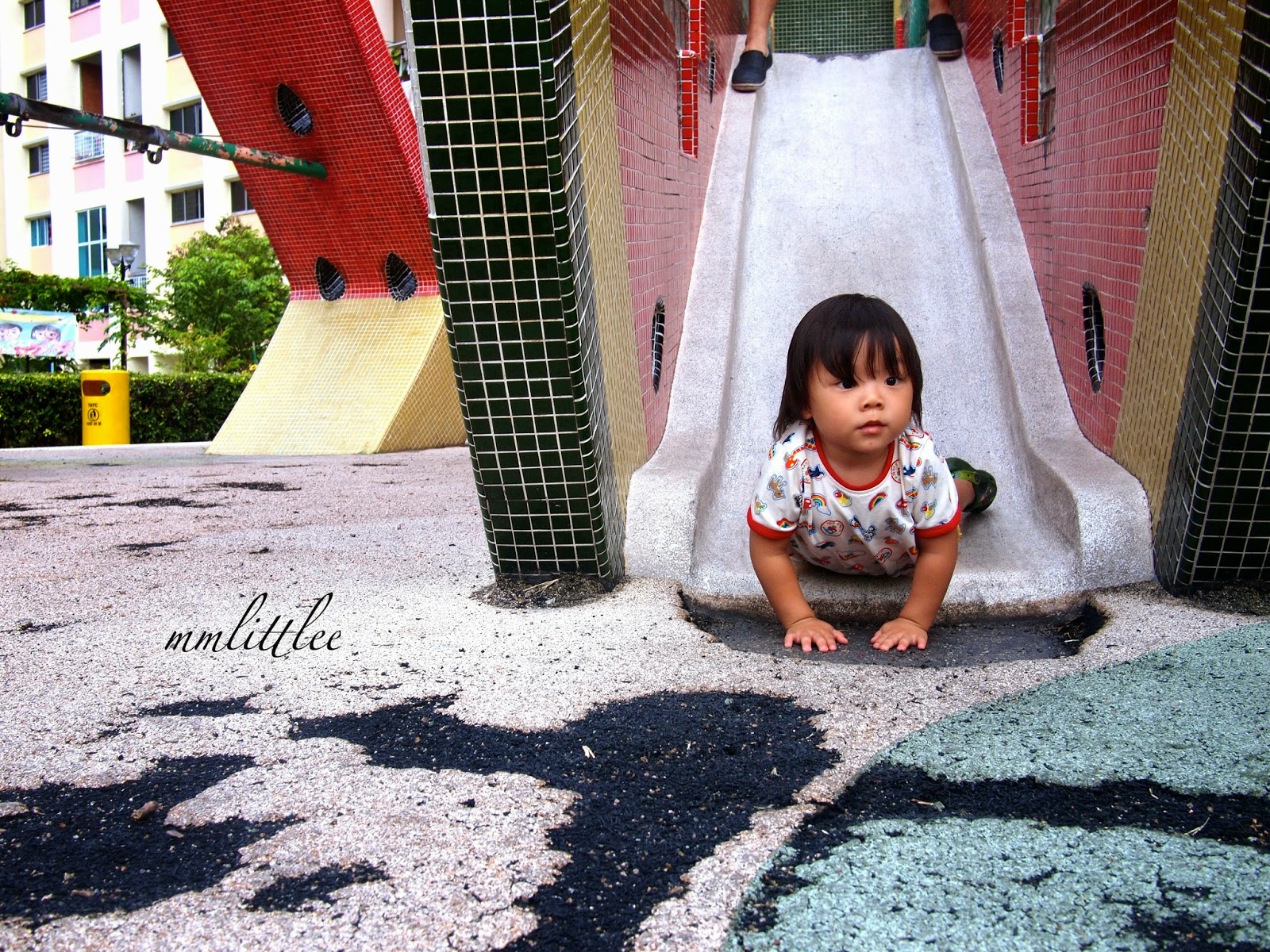 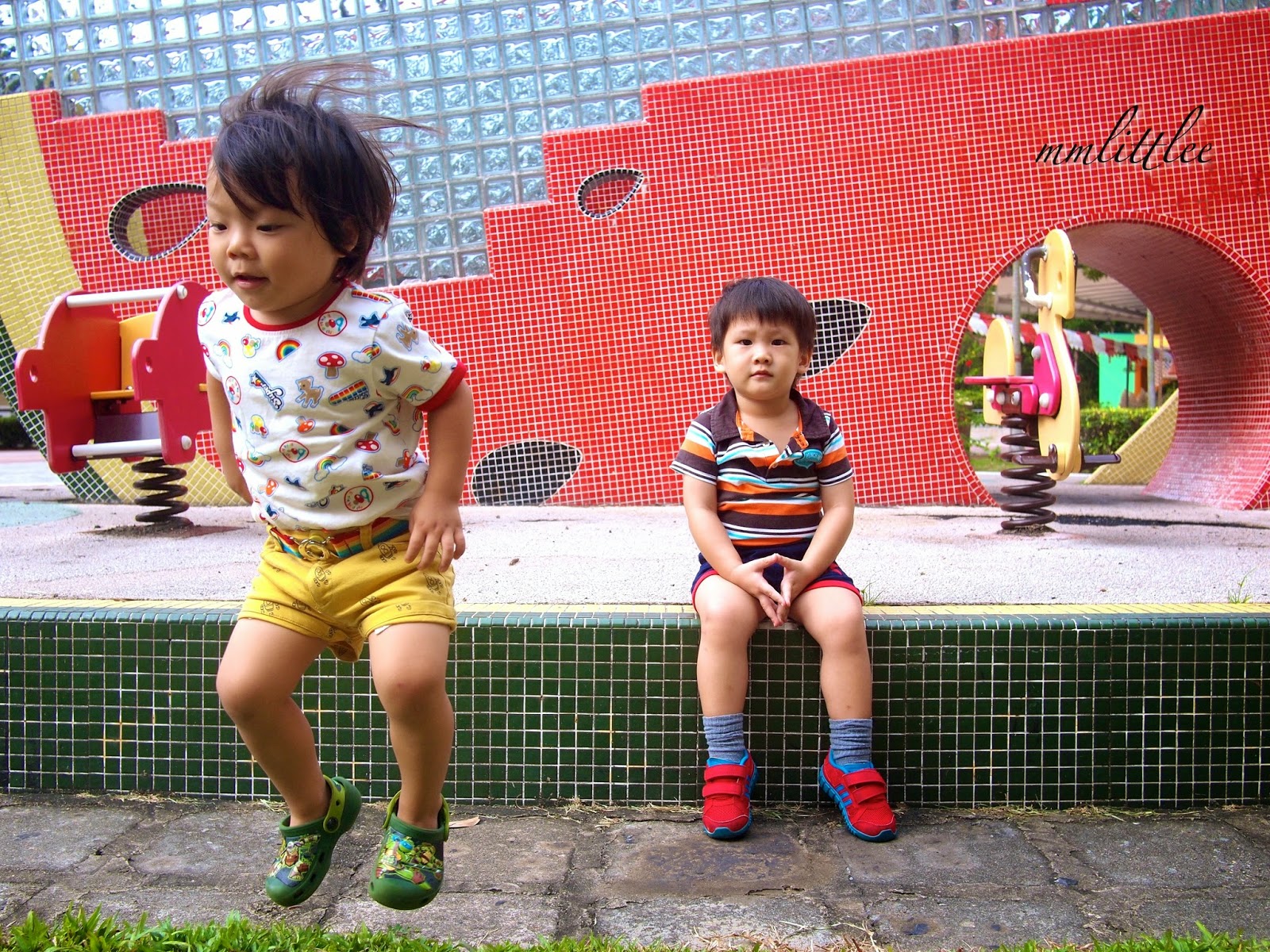 We drove further East in search for the elephant playground at Pasir Ris Park. It is the last elephant playground in Singapore, sand pit and all. It looked terribly sentimental when I googled the pictures and was so disappointed to find that Home Team (NS) Pasir Ris Chalet had been returned to the government. The site is now closed with overgrown grass. Tall gates locked the grounds away from the public and the playground out of plain sight. I had the urge to trespass but erm... it was just a fleeting childish thought.

Then I remembered. Hey! We had Ewan on an elephant slide last year in Sentosa! This is the best replica we could get for the one we lost in Pasir Ris. I do hope it is not demolished and will be reinstated as a monument (oh wow too big a word for a playground) when the site re-opens. 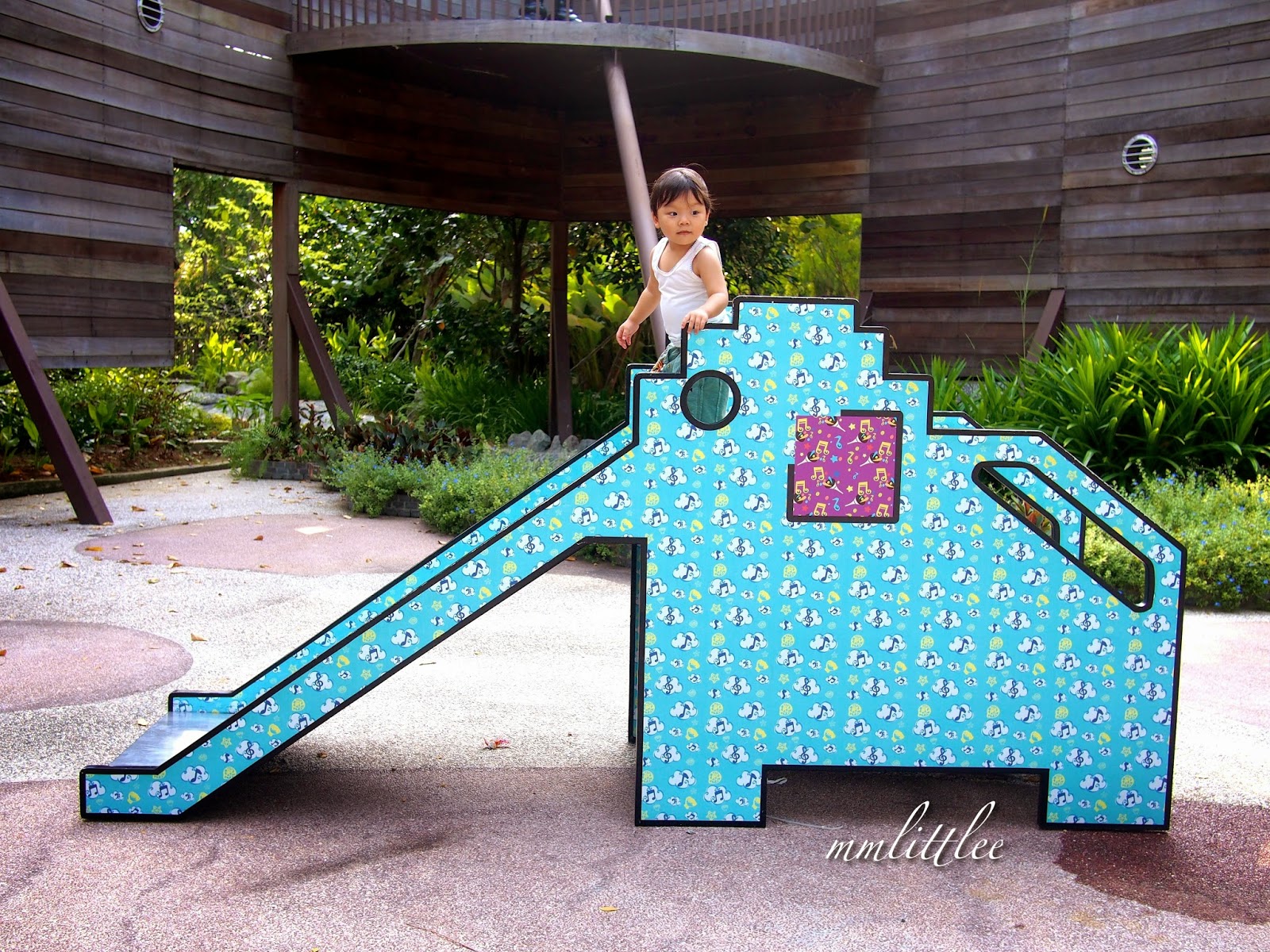 With three little kids, born in the year of the Dragon, we drove from Pasir Ris to Ang Mo Kio to meet the legendary dragon. This was the highlight for us parents! We were excited to meet our old playmate once again and the first thing I did was run the rungs of its body. I can understand the decision to redevelop old playgrounds into safer ones. These structures made of metal and mosaic do rust and can be very slippery. There are no barriers to prevent children from falling off the high platforms and the steepness of the ladder is not very comforting. However, these playgrounds (our playgrounds) stand out from the crowd and inject a different kind of imagination in child's play as compared to the current plasticky ones. Oh those mosaic. Can you envisage the amount of work needed to build one dragon up? Please take time to appreciate the architecture. Give credit not only to the designer but the labourers as well.

Today, we have two large dragon playgrounds left in Singapore. I would suggest paying a visit to both because the dragon at Blk 28 Toa Payoh Lorong 6 sits on a traditional sand pit. You might want to dig your toes into the cold rough sand! It will surely bring back fond memories. 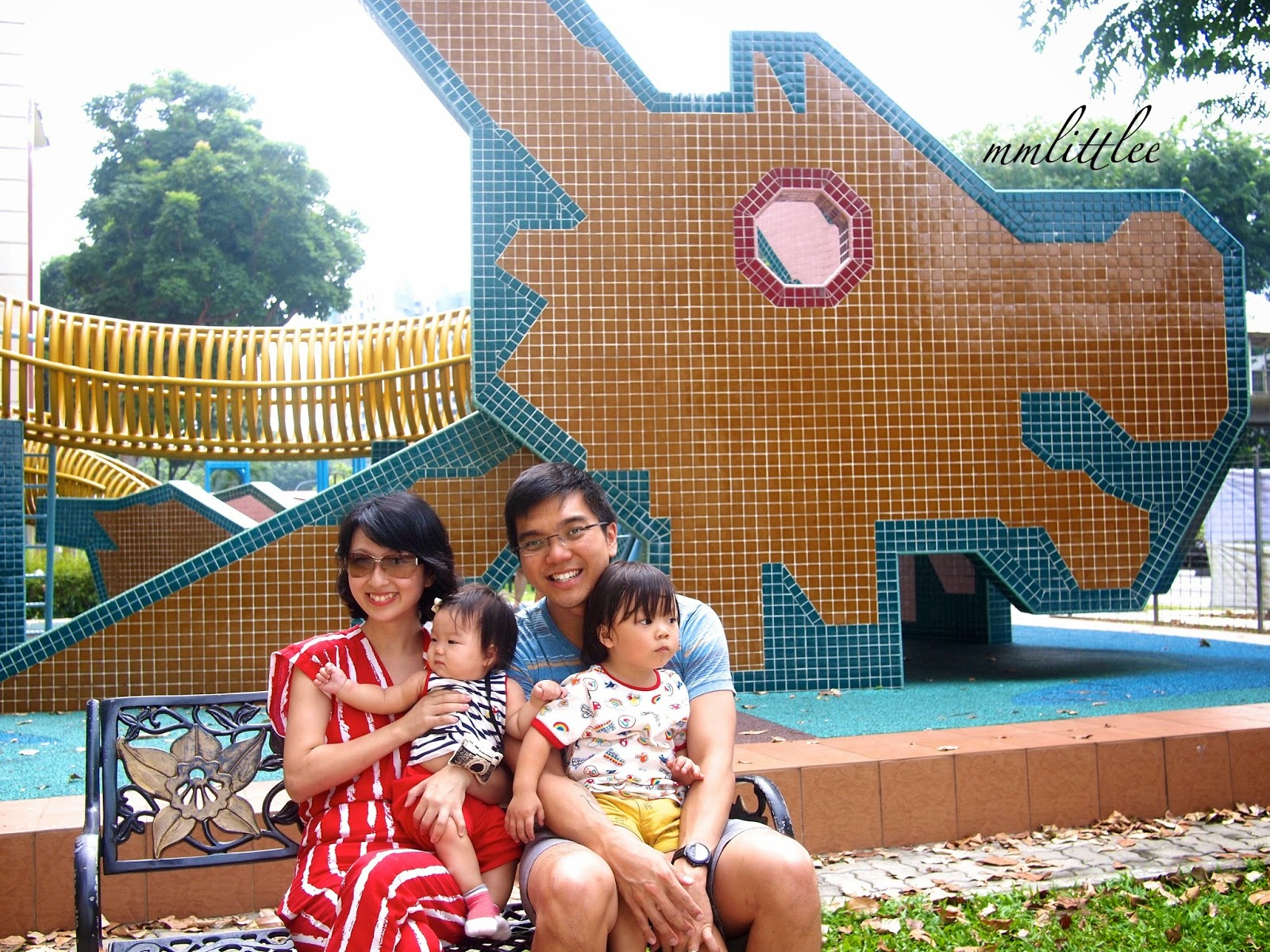 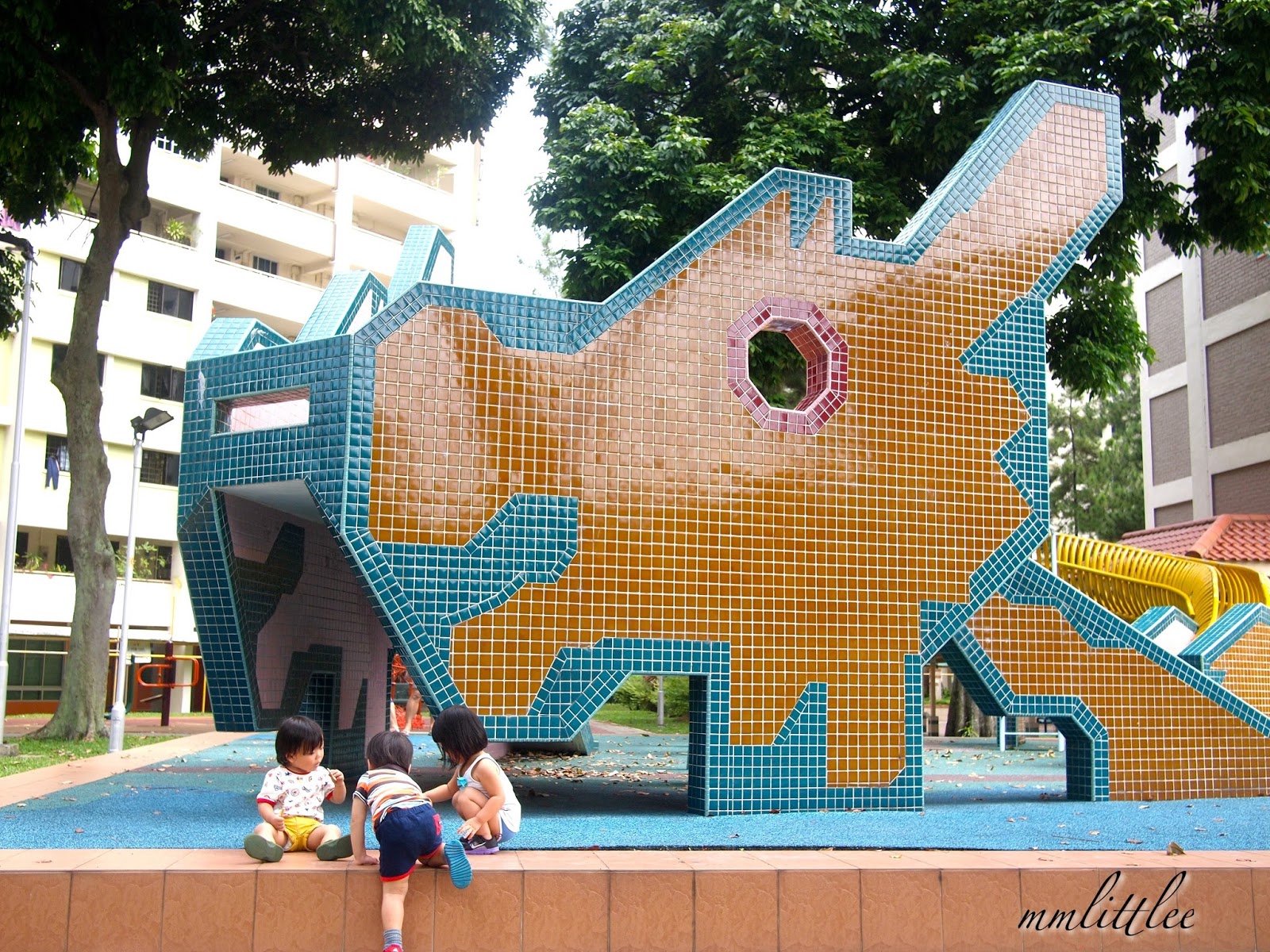 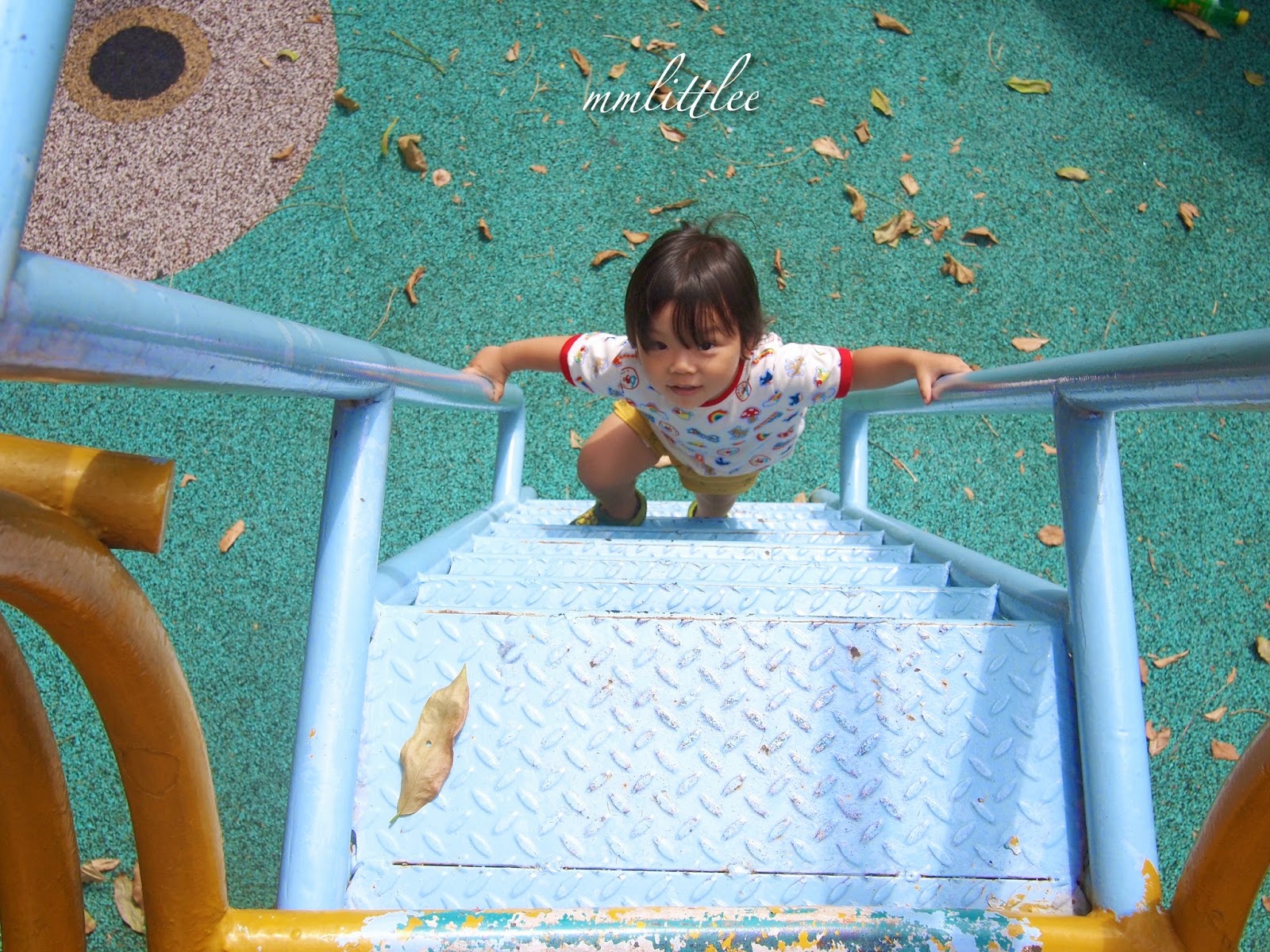 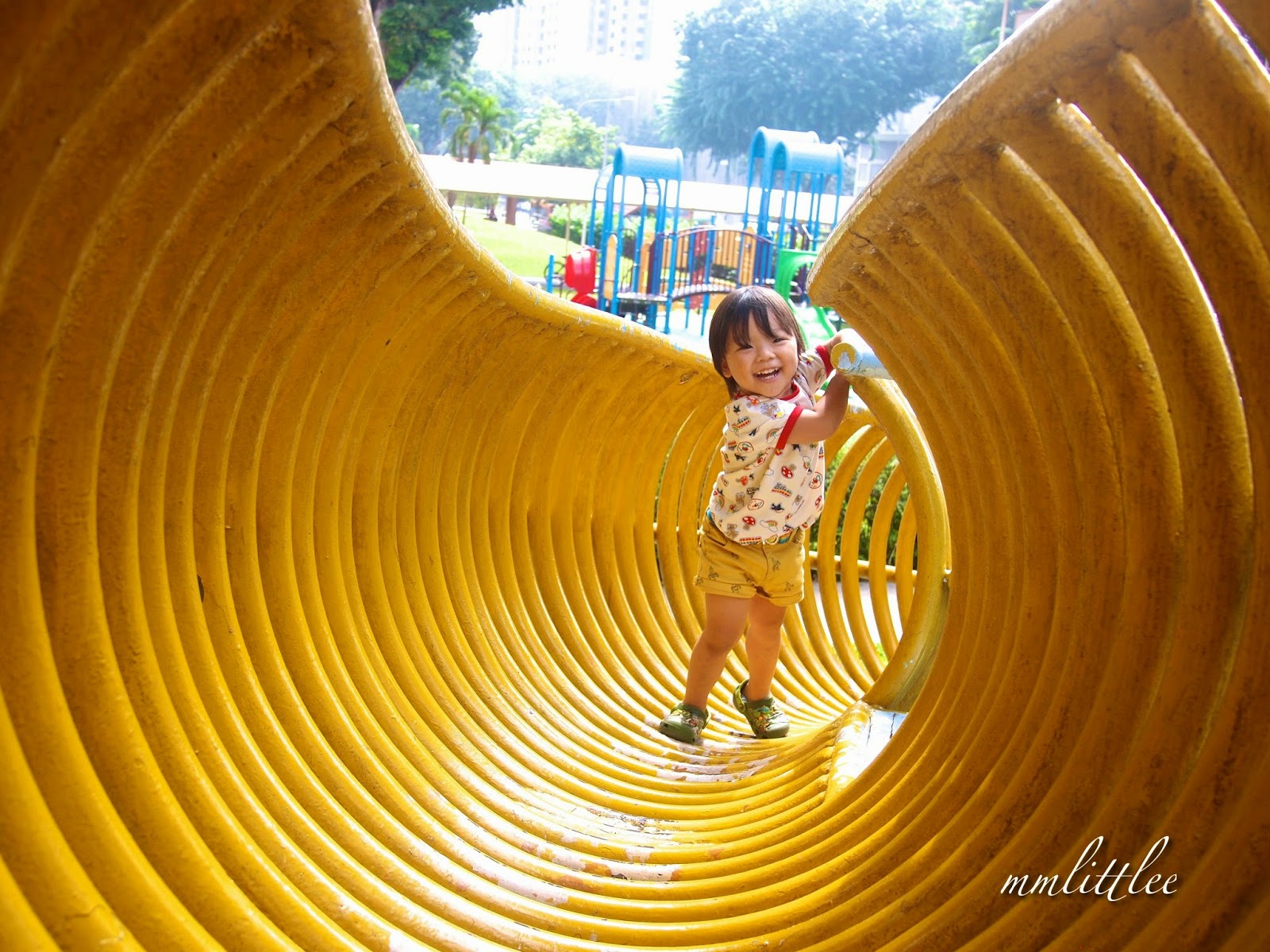 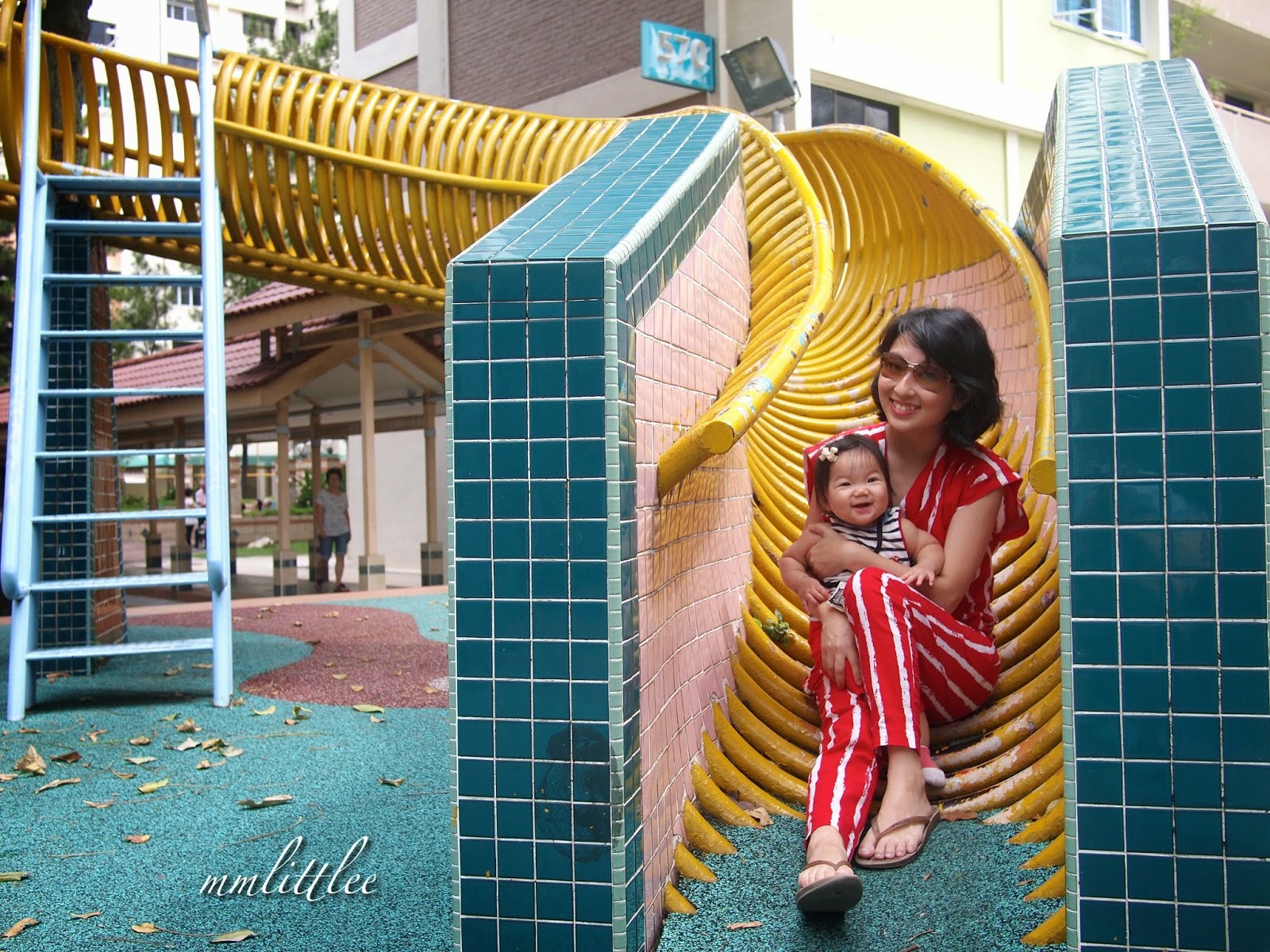 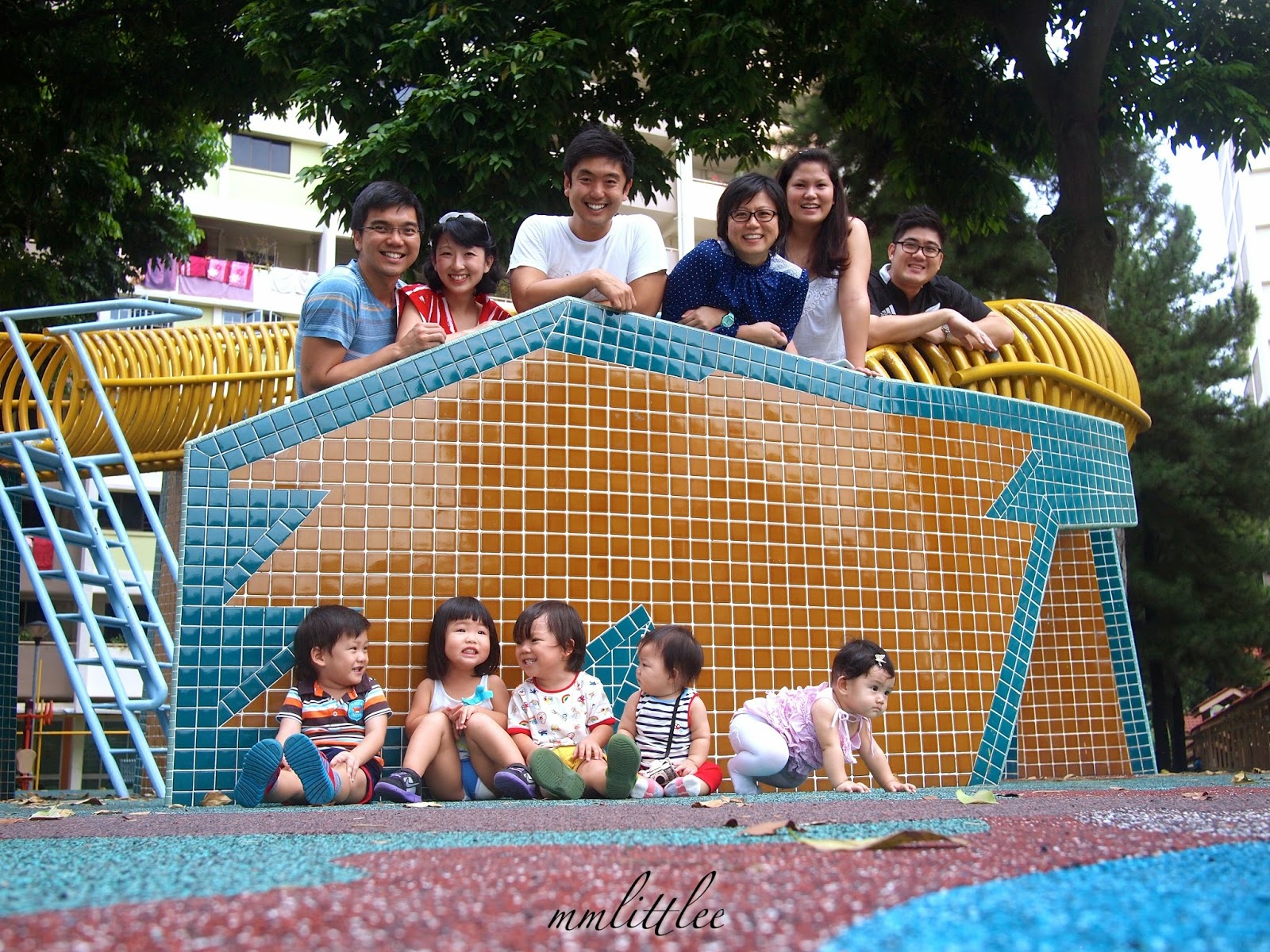 Baby dragon playgrounds are modifications of the original dragons featured above. They are housed in 10 by 10 metres sandboxes for neighbourhoods that have space constrains. Just like the full-blown dragon playground, there are only two baby dragons left in Singapore. This one that we went and another at Blk 240 Toa Payoh Lorong 1. You may choose to put the two Toa Payoh dragons in your playground hunting route and share with us your pictures!

Lower your expectations for the baby dragons because their highlight is only one spiral slide. Despite that, it shapes a generation's memory of Singapore. 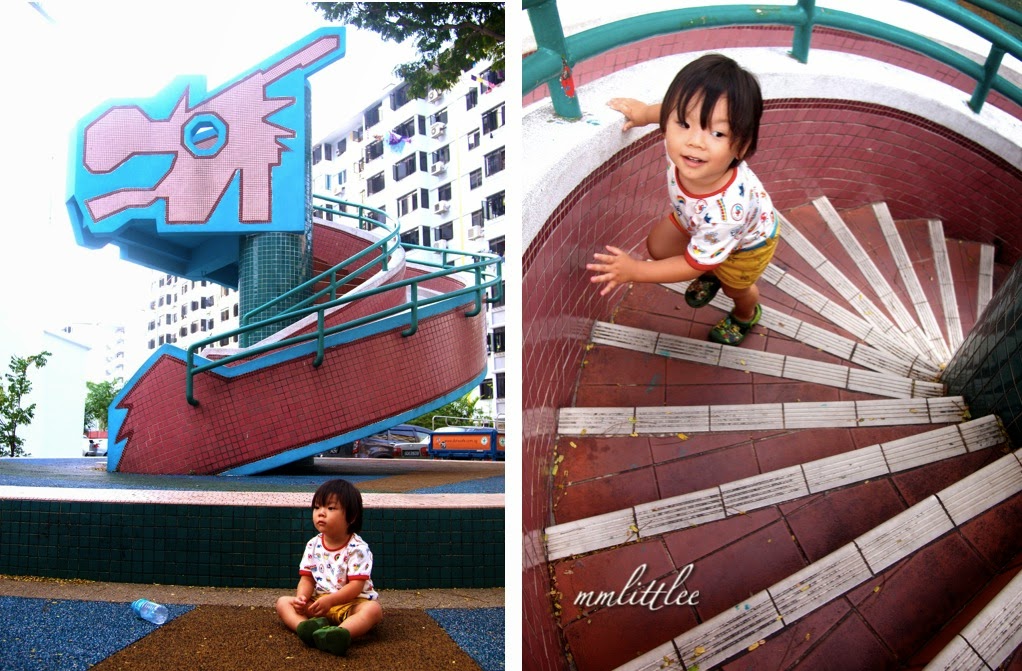 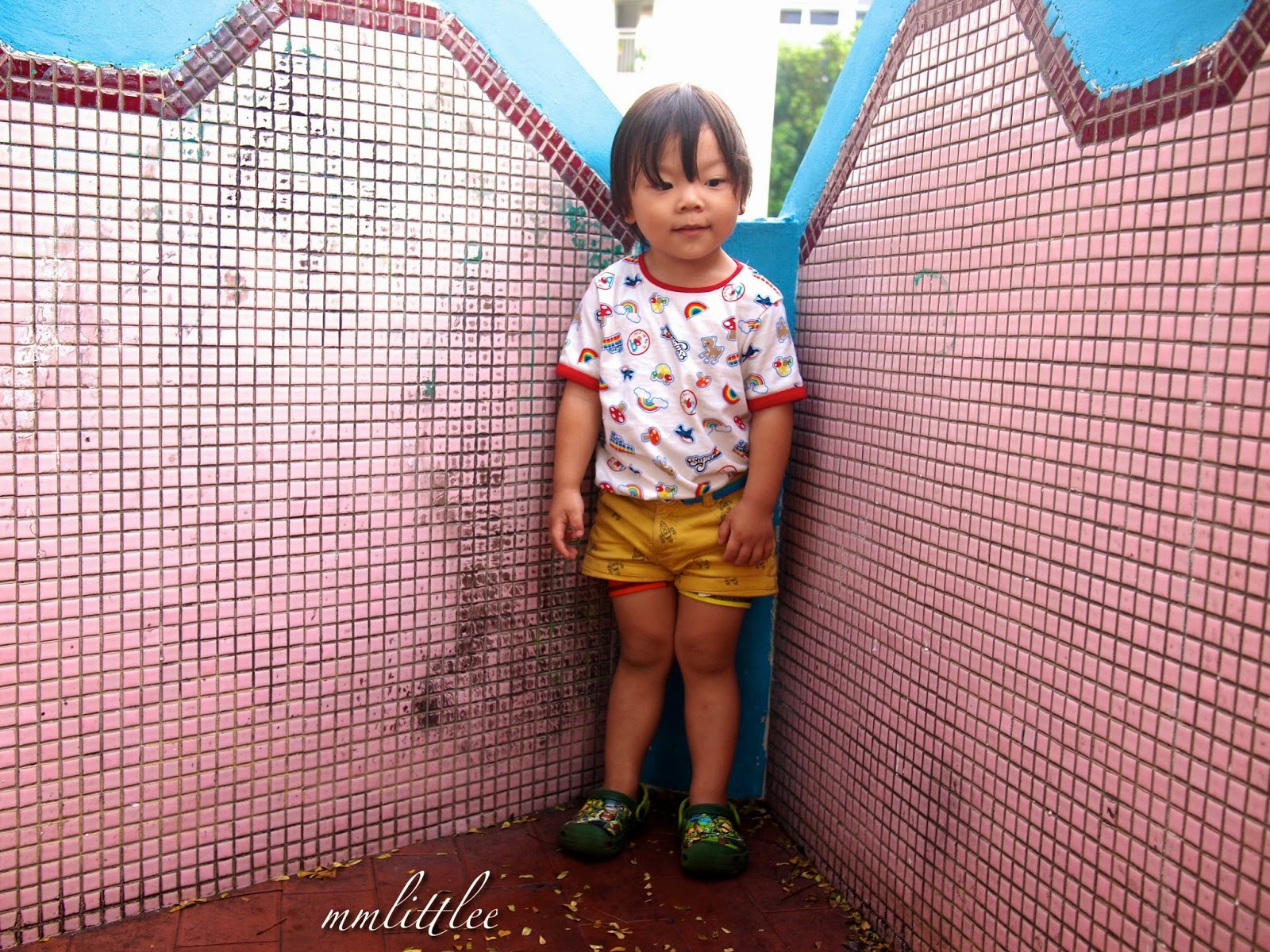 Our last stop for the heritage playground hunt was the dove. By this time, we were all tired but pushed it a little just to finish our chase. Boy was I glad that the last surviving dove playground still has rubber tyre swings! Three of them in fact! There are also three slides - 2 straight ones and 1 spiral.

The neighbourhood is the oldest amongst all that we went. Three blocks of seven-story HDB flats encircle the playground. If we weren't hot, tired and hungry, I would have brought the children on a walk down old HDB corridors. With their retro outfits, we could have taken really nostalgic pictures. Ooooooo and I heard the buttons on the lifts of these old blocks haven't changed from our time! Can you remember? 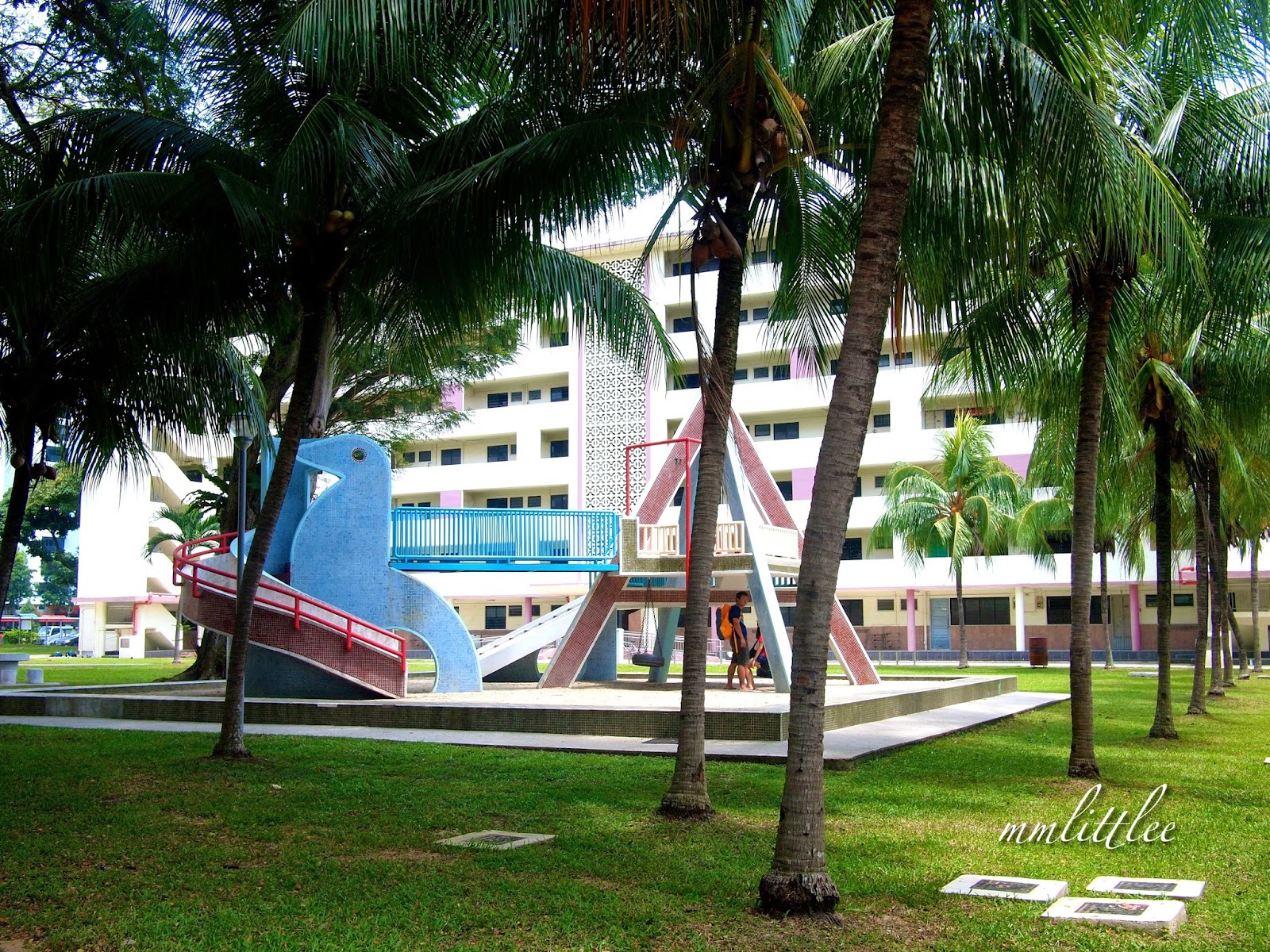 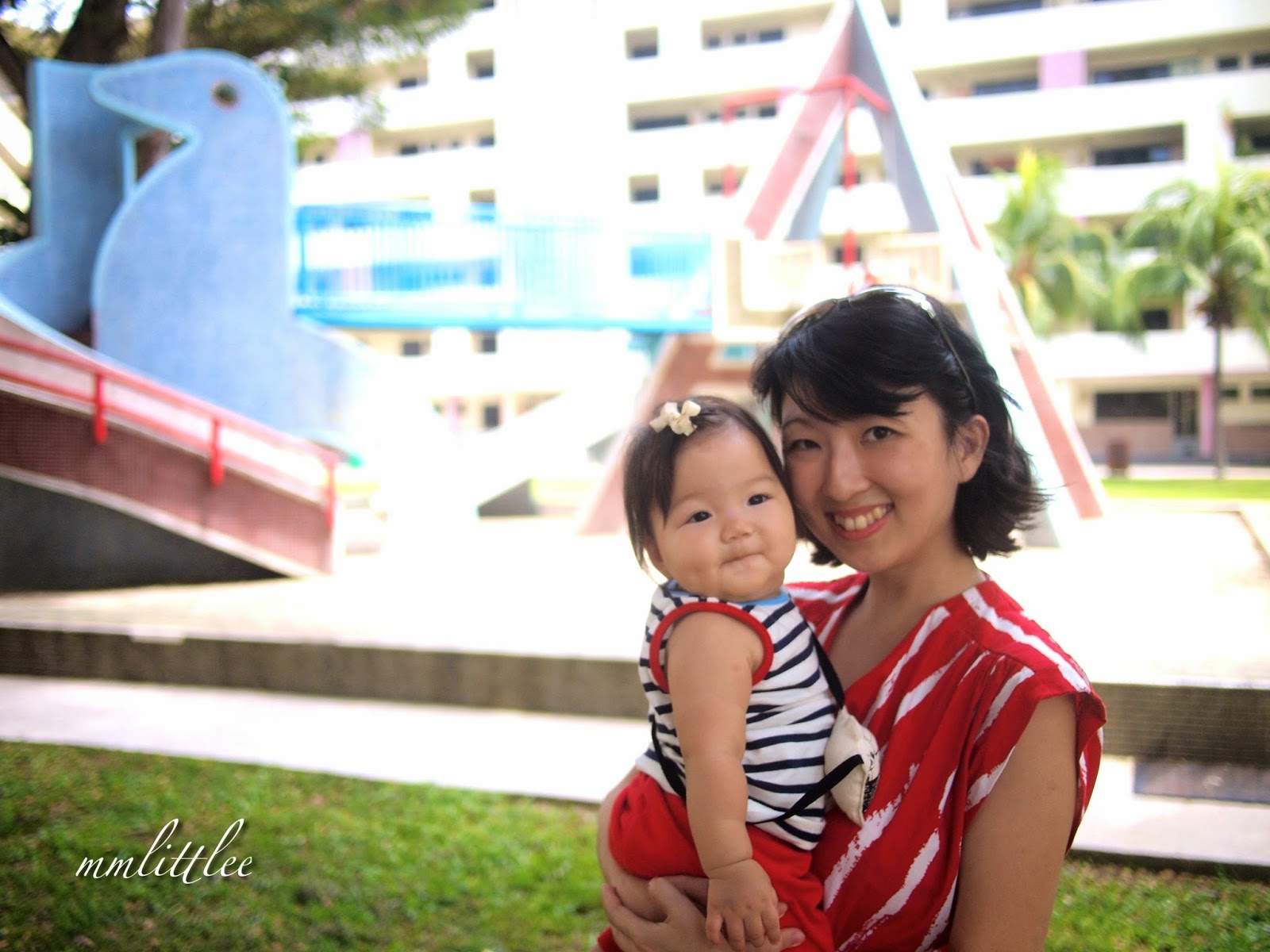 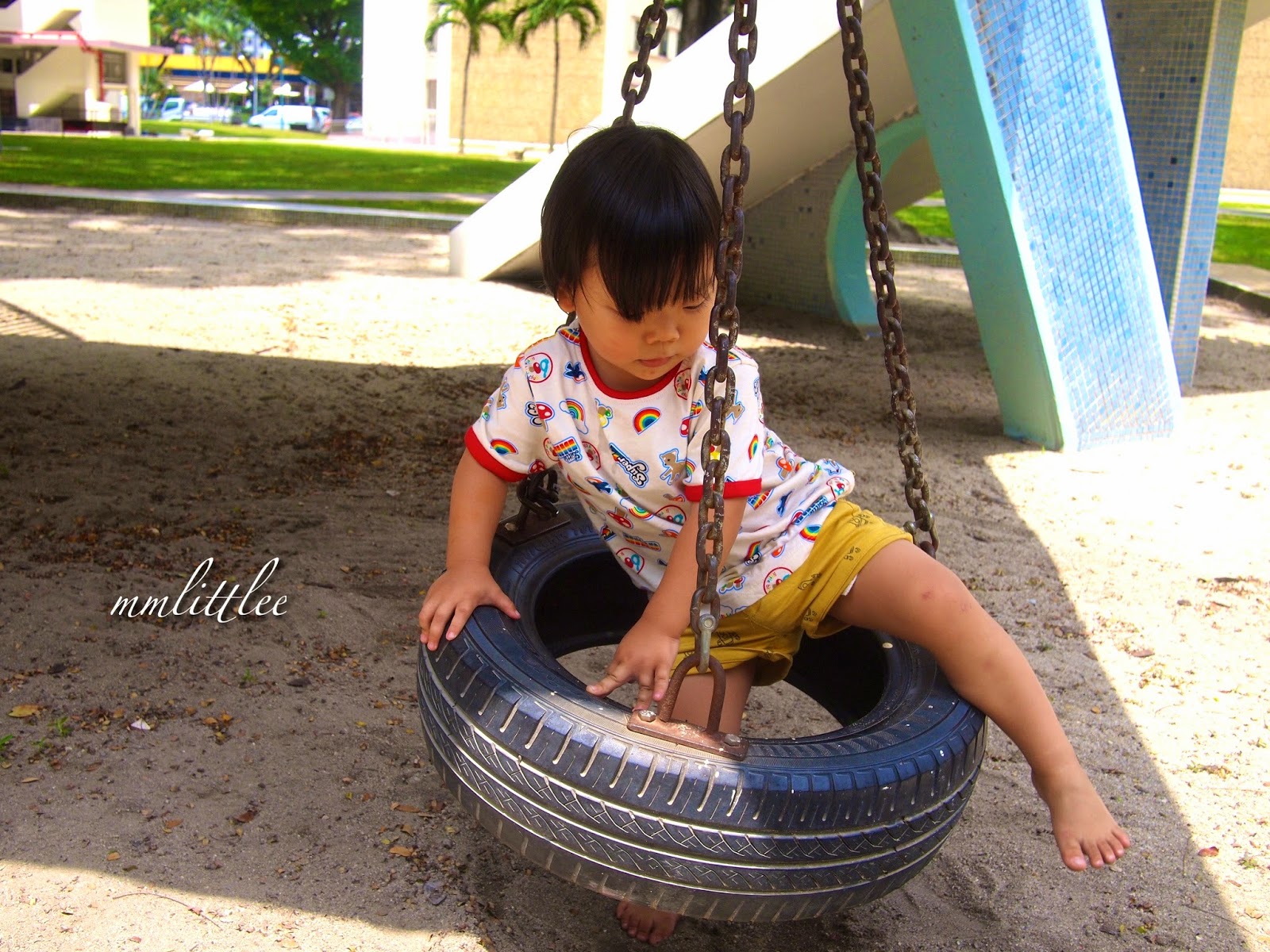 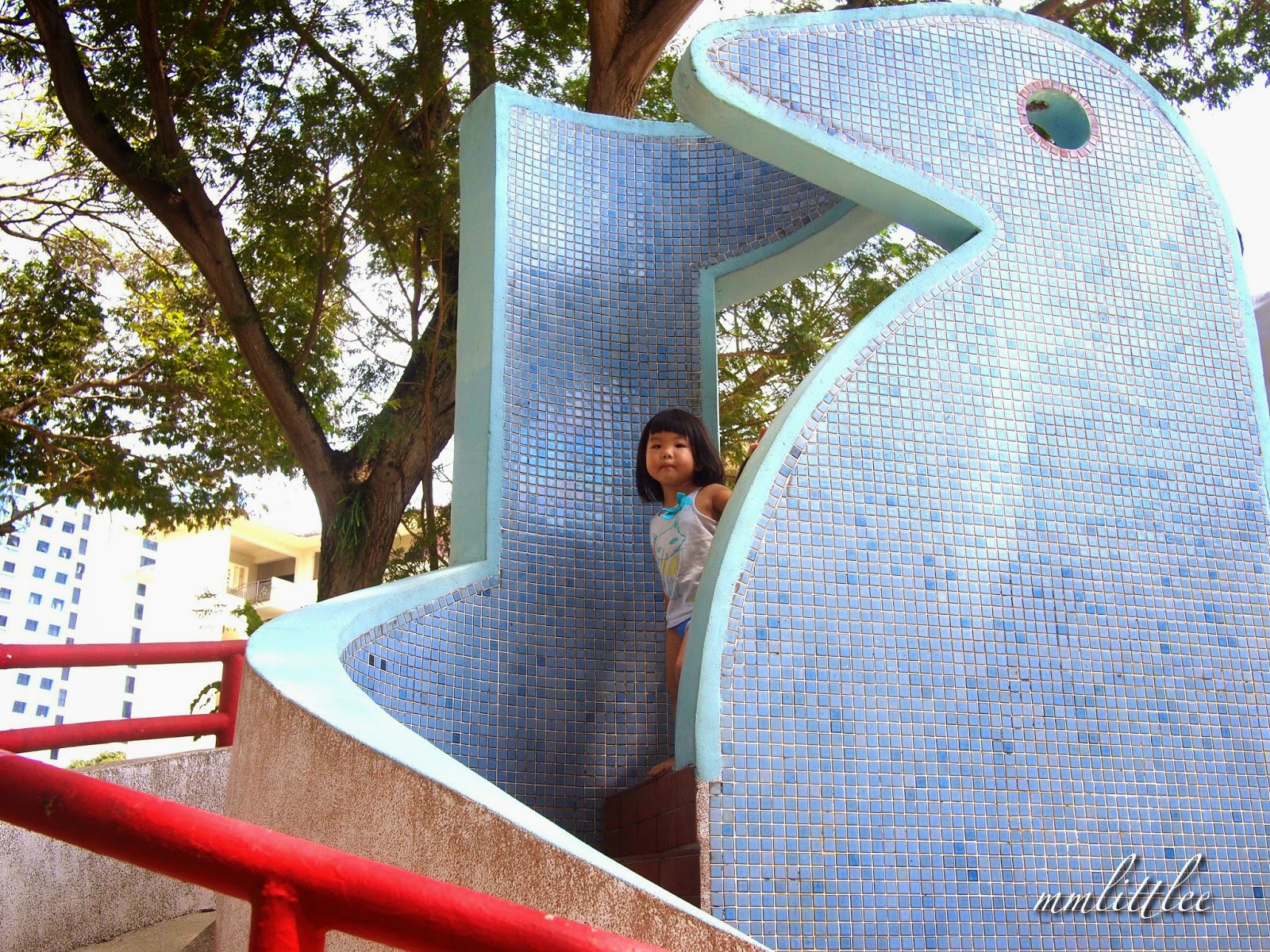 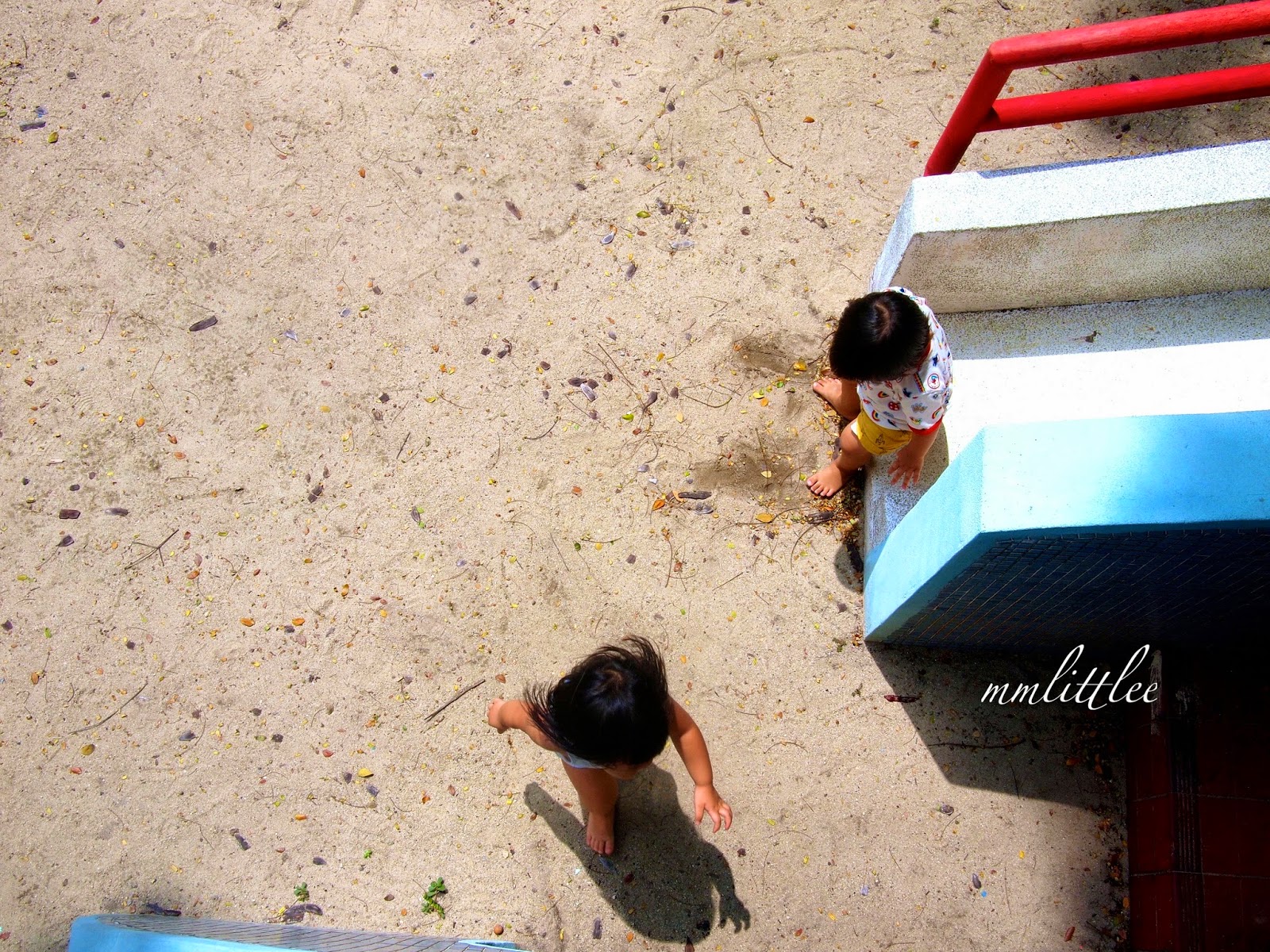 I regretfully announce that the pelican playground is extinct. Just like the elephant playground, we found a replica at Sentosa in September 2014. Allow me to guide you to these fun structures in Sentosa. I do hope they are still there! If you find them, will you let me know please?

DIRECTIONS
- Head to Port of Lost Wonder
- Facing directly at POLW, Turn Right
- Continue walking along the pathway
- Peek into your Left for an open space
- You should find them (Dragon, Elephant and Pelican), sitting bright-coloured on POLW extended grounds 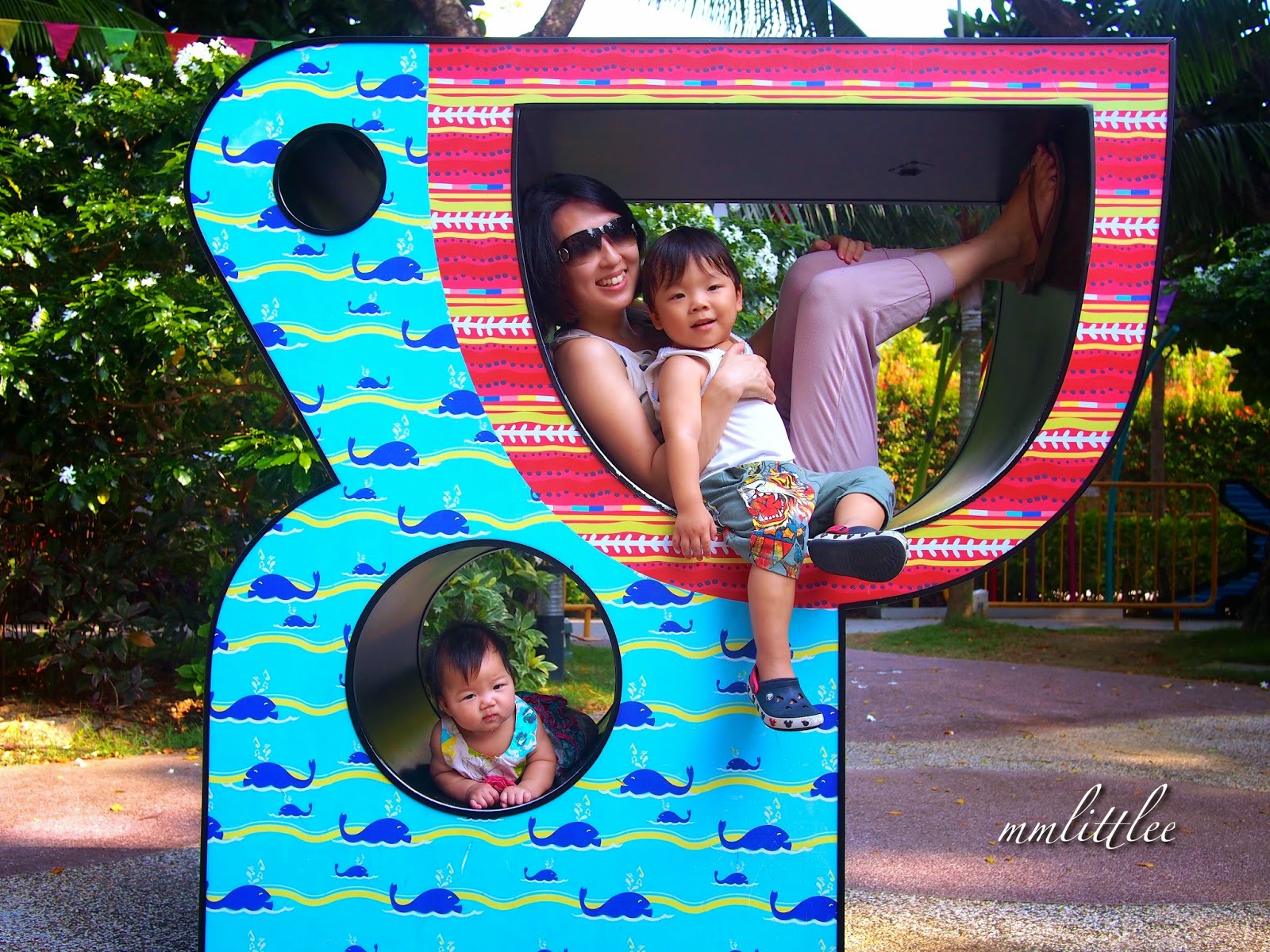 These playgrounds are iconic markers. They are Singapore playgrounds designed by Mr Khor Ean Ghee. Mr Khor, now 80, is particularly proud of the dragons. Recalling the project, he says with a chuckle: "It was us adults trying to think like children, about what we would want to do if we were kids."

A challenge that the builders faced was getting the materials, he recalls. "We thought of using marine paint, which can withstand the weather, but it was too expensive. Instead, we decided on getting colour mosaic tiles in red, blue, yellow and green from Italy." And thanks to those tiles, the playgrounds have not lost their colour or distinctive character despite going through generations' worth of grimy childrens' palms and roughhousing.

He is also happy about how the sand pits, which the structures are embedded in, have stood the test of time. "The sand pits were designed with pipes underneath, so that rainwater can be drained from them," he said, beaming with pride.

These playgrounds are near extinction but Mr Khor is not bothered, saying his designs have served its time and purpose. It is really just us, 1970s and 80s kids, that find it hard to let our childhood go.